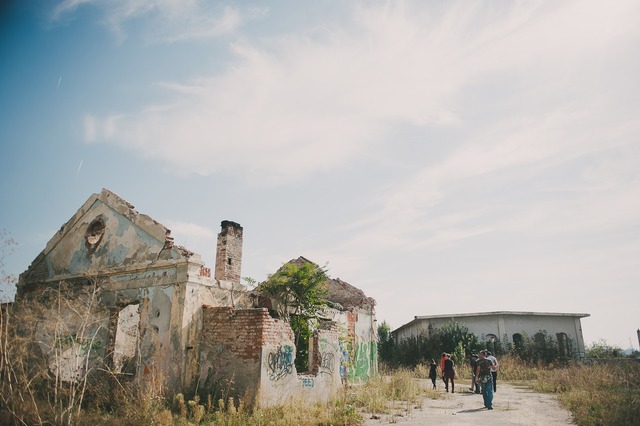 Admit it: you secretly wanted to suit up with Egon and the gang when you were a kid. (Or with Patty just last year because Leslie Jones is everyone’s dream bestie.) And even though it’s been years since you confessed to needing a nightlight, you still love getting too scared to sleep by those ghost tales told around a campfire.

If spirits and spells are your thing, here are six haunted cities where you can scare yourself silly. (Urban Adventures accepts no liability for nightmares and heebie jeebies.)

We know what you’re thinking. The city of sun and surf is home to ghosts? Yes. After all, remember that Australia had difficult beginnings. It was once a penal colony, and the settlers who sailed from Europe to the remote desert island were faced with harsh terrain and deadly creatures that made life difficult — and early deaths frequent.

The most haunted town in Australia is said to be Picton, located southwest of Sydney. The town is home to the Redbank Range Tunnel, which used to be a corridor for trains to and from Melbourne. The tunnel was the site of many deaths and suicides, including one girl who was assaulted and murdered, and another who allegedly hanged herself at the entrance — all their spirits are said to still wander the 592-foot tunnel. In Manly, a suburb of Sydney, the North Head Quarantine Station housed victims of diseases such as smallpox for 150 years — and saw more than 500 deaths. Today, the heritage buildings are known as Q Station and used as a conference and event facility — you know, for those who don’t mind partying with a few ghosts.

Of course we have to include Romania on this list. After all, it’s the home of Dracula — which, if you know your literary history, was a character loosely based on Vlad the Impaler. Vlad was a prince of the Romanian state of Wallachia and infamous for his cruel torturing and impaling of enemies (there are tales of games among his soldiers to see who could hit the fewest organs while impaling — leaving victims to suffer even longer as they died on sticks).

Most ghost-seeking tourists head north of Bucharest to Bran Castle, marketed as the setting inspiration for Bram Stoker’s novel. But there are plenty of creepy sites within the city, most of which have little to do with fictional blood-sucking vampires. Hotel Cismigiu was used as a student dorm for several years, during which time a girl is said to have fallen down the elevator shaft and died; her spirit now wanders the halls. A former orphanage on Strada Franceza is said to house the crying ghosts of children who died of starvation and sickness. And lastly, for your vampire fix, serial killer Ion Rîmaru terrorized Bucharest in 1970 and 1971. He was given the nickname of “The Vampire of Bucharest” for not just killing and raping women, but also for practicing cannibalism, necrophilia and, yes, blood sucking.

Bogotá’s historic neighbourhood of La Candelaria is believed to be home to a lot of supernatural activity. And we mean a lot. There are haunted museums, hotels, restaurants, apartment buildings, houses and even a haunted park, much of which is attributed to the fact that, before cemeteries, residents used to bury the dead in their home gardens. Some of the creepier tales include the angry soul of a servant girl who was tortured and buried alive by her employer’s wife (she was worried about her husband’s wandering eyes), and the goblin Baltazar, said to be the spirit of a baby thrown into a well by his unwed mother.

However, the ghosts of Bogotá aren’t just confined to La Candelaria. At City Hall, typewriters are said to run on their own while lights flicker, in the abandoned San Juan de Dios Hospital, the ghost of a nun wanders the halls, and in Bolívar Square, the ghost of José Raimundo Russi — a 19th century lawyer who was executed for murder—is said to be a regular visitor, impeccably dressed but with a bloody face.

With all the chateaus scattered across the French countryside and centuries of history, there are bound to be a lot of spirits wandering about. But within the city of Paris, there are few particularly eerie sites, such as the very creepy Catacombs (which is also a museum, so yes, you can actually go inside and visit it). This underground ossuary houses the remains of some six million people, their bones and skulls lining the walls — and their spirits haunting the site. There have been reports of strange orbs, voices and the sensation that you’re being touched.

If you’d rather make contact with spirits above ground, the Père Lachaise Cemetery is the city’s largest cemetery, with 300,000 graves. It’s also the famed burial site of celebrities such as Jim Morrison and Oscar Wilde, and is believed to be one of the most haunted cemeteries in Europe. Visitors have claimed to see the spirits of Morrison and Marcel Proust, and many say they’re overcome with shivers and a sense of unease when they’re on the cemetery grounds.

Easily the creepiest place in all of Mexico (okay, maybe the world) is the Island of the Dolls, or Isla de las Muñecas, located in swampland just south of Mexico City. Hundreds of dolls hang from trees, many of them decapitated or with severed limbs. According to legend, the first doll was placed in the forest by the island’s caretaker, Don Julian Santana Barrera, in memorial for a little girl who had drowned. He claimed he became haunted by her spirit and continued to add dolls to appease her. Today, tourists often bring even more dolls, and many claim that they can hear the dolls whispering to one another, moving their heads and even beckoning visitors to come to the island.

Within the city limits, you can find the former house of a witch named Panchita, a street said to be the site of satanic rituals (El Callejón del Aguacate) and several haunted houses where grisly murders took place, such as the home of infamous spree killer Gregorio “Goyo” Cárdenas Hernández, nicknamed the strangler of Tacuba. As well, the National Archives are housed in a former prison ominously nicknamed the Black Palace, and the building is said to experience frequent supernatural activity.