Blog > Things to do in: Bratislava 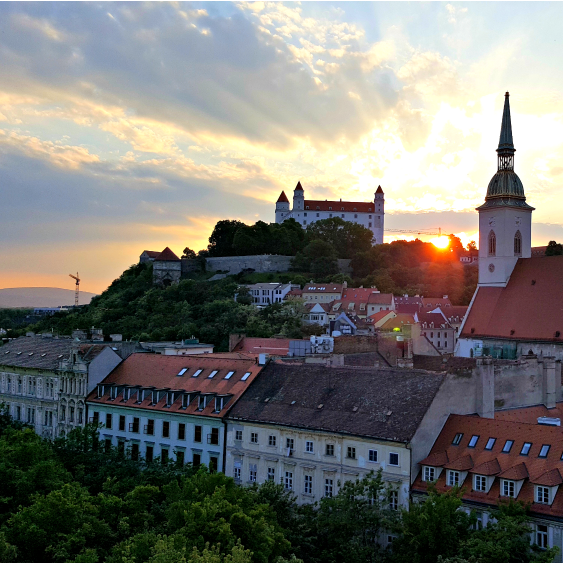 Things to do in: Bratislava

Urban Adventures
Bratislava
Europe
Slovakia
Things To Do In

Bratislava is a city that is often overlooked in favour of more popular central European cities that are nearby, like Prague, Budapest, and Vienna; however, Bratislava offers a unique look into the history of the area on a path less travelled.

Located on the River Danube, Bratislava stages a contrast between modern and historic, with traces of the communist era still evident in many parts of the city. For much of its history, Bratislava was a three-language town, with citizens speaking Slovak, Hungarian, and German.

Aside from interesting people and good conversation, the city offers beautiful architecture, exciting nightlife, plenty of culture with art museums and galleries abound, as well as delicious food and plenty of drinks. With distinct traditions developed throughout an eventful history, this European city is the perfect place to experience it all! Visit the roofed marketplace Trnavské mýto to get your local produce fix!

Start your morning off the way most families did when the country was under communism. Visit the roofed marketplace Trnavské mýto or the Miletičova open-air market. You’ll find a huge variety of products at good prices, and you’ll get the experience of local shopping, too!

From Trnavské mýto, follow the tram tracks that lead to Kamenné Námestie in the city centre. On the way there you’ll pass Medická záhrada (a beautiful park), and two stone lions on a building that was the headquarters of the ŠTB (the Slovak version of the KGB). Hotel Kyjev and the My Bratislava department store buildings date back to the 1970s. Walk through SNP Square (where the velvet revolution took place) and take a look at Obchodná Street. Finish your mini-tour of the tourist spots at Námestie slobody with a great view of the beautiful, socialist fountain in the middle, and then head to the Savage Garden Restaurant for lunch.

Take every opportunity to sample all the local fare

Work your way through WWII bunkers

Head to Petržalka to check out the concrete jungle that is full of panel houses, and is also home to many bunkers that were left over from World War II. Under communism in the ’80s, the government had plans to build a subway system, which was later deemed unnecessary. Many abandoned stations were never demolished, and trust us, they are worth a visit as they are now legal graffiti zones. Head to the top of the SNP Bridge and take in the view from the observation deck. There is also a UFO restaurant that offers snacks and great wines, and the view is not too shabby, either. If you feel like going out afterwards, head to Subclub, a nightclub that is in a former bomb shelter and is open until the wee hours of the morning.

Rusovce can be reached by municipal public transport or by taking a bike ride along the Danube cycle-path. Rusovce boasts an English Tudor-style castle, surrounded by a park. The Ancient Gerulata Museum is also in the area and is a great place to look at some exhibits on ancient history.

Čunovo is a town near Rusovce, and the Slovak Olympic champion Michal Martikán, along with the top water slalom sportsmen, train in this “water athlete’s paradise,” with a 816-metre-long canal that is 6.6 metres deep. Near the water sports complex, at the tip of the peninsula, is the European Museum of Modern Art, also known as the Danubiana Art Museum. This museum hosts exhibitions by top European and local artists in its monstrous 1,700 m2 space.

Make your way along the Carpathian wine trail

For all the wine-lovers out there, definitely plan to take a trip to the former royal free towns of Pezinok, Modra, and Svätý Jur. In the small Carpathian Museum in Pezinok, you’ll have the opportunity to learn more about the history of this wine-growing region. Lovers of “art naïf” can visit the Gallery of Art Naif in the Schaubmar Mill. Modra is famous for its preserved historical centre, and is also linked to the life and activities of important personalities in Slovak national life. Aside from it being a traditional wine-producing region, the area is still active in its manufacturing of majolica (distinctive earthenware).

Fun times for the kids

The Bibiana International Art Centre for children is one of the few of its type in Europe. Children of all ages are invited to events that focus on artistic creation – exhibitions, theatre performances, creative workshops, and musical programs. In the main square you can get on a little train that will take you through the narrow streets of the Old Town.

In Koliba, there is also a bobsleigh track, which houses over 360 metres of bends, with a jump and bridge that is an unforgettable and thrilling experience for any child.