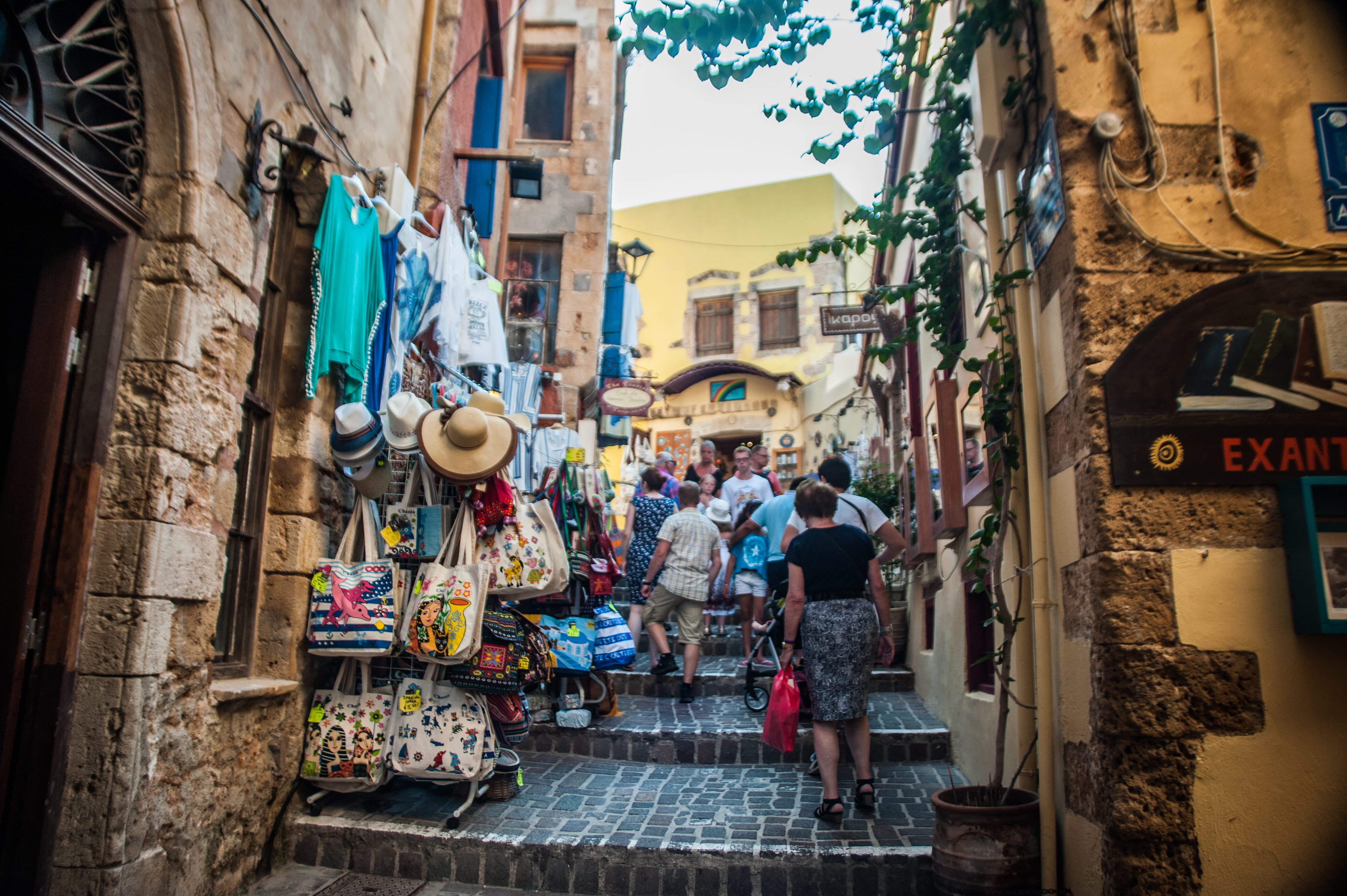 So you’ve landed on Crete and only have one day to take in as much of the island as you can. What to do? Our advice: stick to the city of Chania, as there’s plenty of sites to see, food to eat, raki to drink, and beaches to bum around on, so your biggest problem won’t be finding something to do — it’ll be finding the time to cram it all in! Thankfully, we’re here to help with some insider tips on making the most of your 24 hours in Chania.

If you think 7am is early for a laidback Greek island, then prepare to be surprised. Crete is mainly an agricultural society and even today, most people wake up early to attend to their duties. Plus, the first guests arriving by boat to Chania port arrive even earlier, around 6:30 am, so there is a plethora of things to see and do in the early hours.

But before you head out exploring, you must try a bougatsa for breakfast. Bougatsa is a traditional Greek pastry with layers of buttered filo dough and sweet semolina custard inside, topped with icing sugar and cinnamon. It’s often eaten for breakfast throughout Greece, but we like to think that the version in Chania is just a bit different and far tastier than what you’ll find in the rest of the country.

There are a few shops selling the traditional Chania version of bougatsa, which is filled with myzithra, a local salty creamy cheese, instead of the traditional custard. Our favourite of them all is Bougatsa Iordanis. They have been serving the best bougatsa since 1924 and have been family-owned since then — the story says that the original owners learned the recipe from a local Muslim.

Walk off your delicious breakfast with a walk around the Chania Market, located just a few minutes away from Bougatsa Iordanis. The market is located in the centre of Chania, and was built in 1908, on the site of a bastion of the fortification wall. It’s also one of the biggest covered markets in the Balkans, with more than 70 shops, all selling local products, from meat and fish to herbs to dairy products to souvenirs. Experience the hustle and bustle and sample some of the island’s best products as you browse. 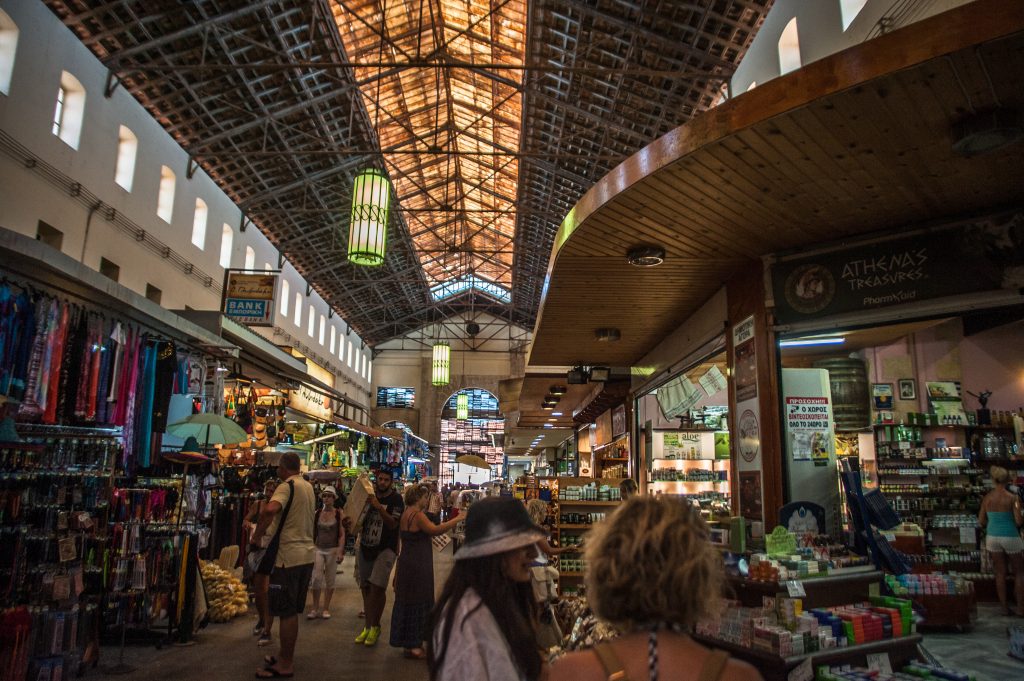 If you’re still hungry (don’t worry, you can forget your diet while you’re on Crete), grab lunch at one of the local fish taverns. Crete is the biggest Greek island, and fresh fish and seafood can be found in almost all the city restaurants. But for food with a view and a sea breeze, walk a mere 15 minutes to your next stop, the waterfront neighbourhood of Nea Chora. Nea Chora is a long sandy beach, only one kilometre west of Chania’s city centre. In the summer months, just head straight to the beach, then enjoy fresh seafood and local specialties at Akrogiali restaurant. The food is delicious, the staff is friendly, the prices aren’t tourist-gouging, and the beach is just in front of you.

Don’t drink too many raki at lunch, as our next stop is Chania’s most beloved site: the Old Town and Old Venetian Harbour, also known as the “Venice of the East.” You’ve probably read about this charming corner of the city, where there’s an exotic mix of Venetian and Ottoman monuments. Walk the picturesque cobbled alleys and get lost in the maze of Old Town, where there’s also plenty of cafés for refuelling and shops for picking up souvenirs. 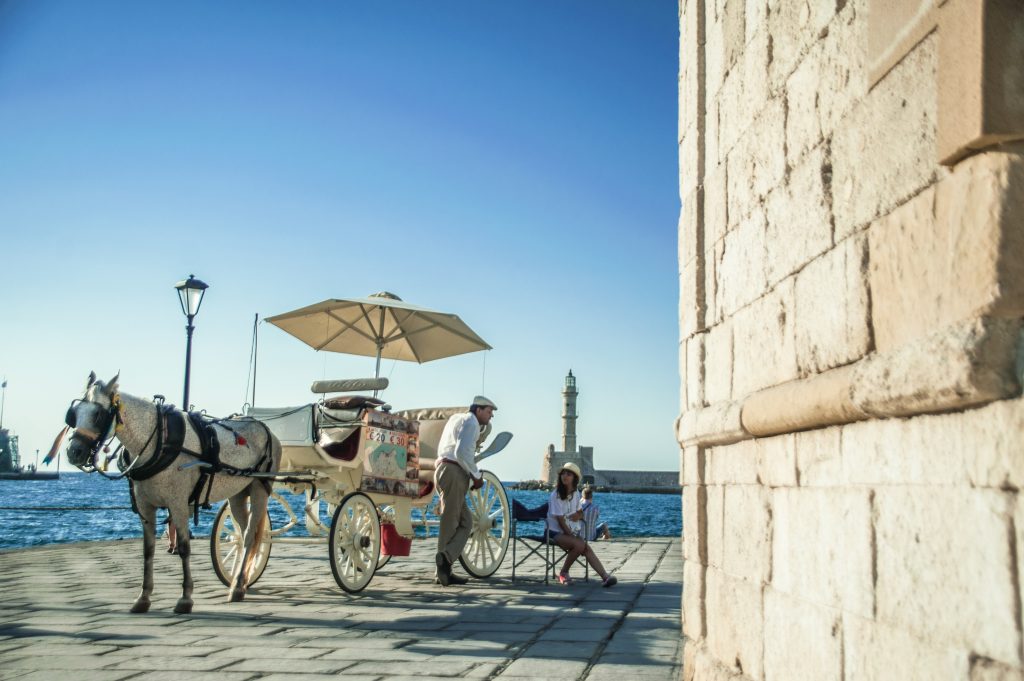 As the sun is setting, walk along the harbour towards the lighthouse. The Old Venetian Harbour changes at night and the lighted walls reflect an ambiance of the past. Even if you’ve walked along here during the day, when night falls, it’s a different experience with a totally different mood. Go into the old shipyards (Neoria) and admire the replica of a 3,500-year-old Minoan ship that was built here. See what the Minoans used to sail and how they exported their products to many countries, from Italy to the Middle East.

Once you’ve taken in all that history, let’s step back into the present and, more specifically, Chania by night! Do as the locals do and sit down for a coffee or a cold raki. Or, if you’re a beer lover, check out Rudi’s Bierhaus, which serves a wide range of beers. If music and dancing is your thing, visit Ta Chalkina, a restaurant-bar on the waterfront with great food and live traditional Cretan music.

Don’t have time for a full 24 hours in Chania? No worries, we’ve got the speedy version for a shorter layover. Note that you’ll need about five hours for your visit, as both the port and airport are outside the city, and it’s a half-hour bus drive into Chania (or a bit faster if you take a taxi). Public transit is available for going to and from the airport.

When you get into Chania, go straight to the Venetian old port and stroll around Old Town. This part of the city is where you’ll find some of the most visited and most famous sites in Greece, and you’ll get to see some amazing parts of Chania. You’ll need at least two hours to properly explore.