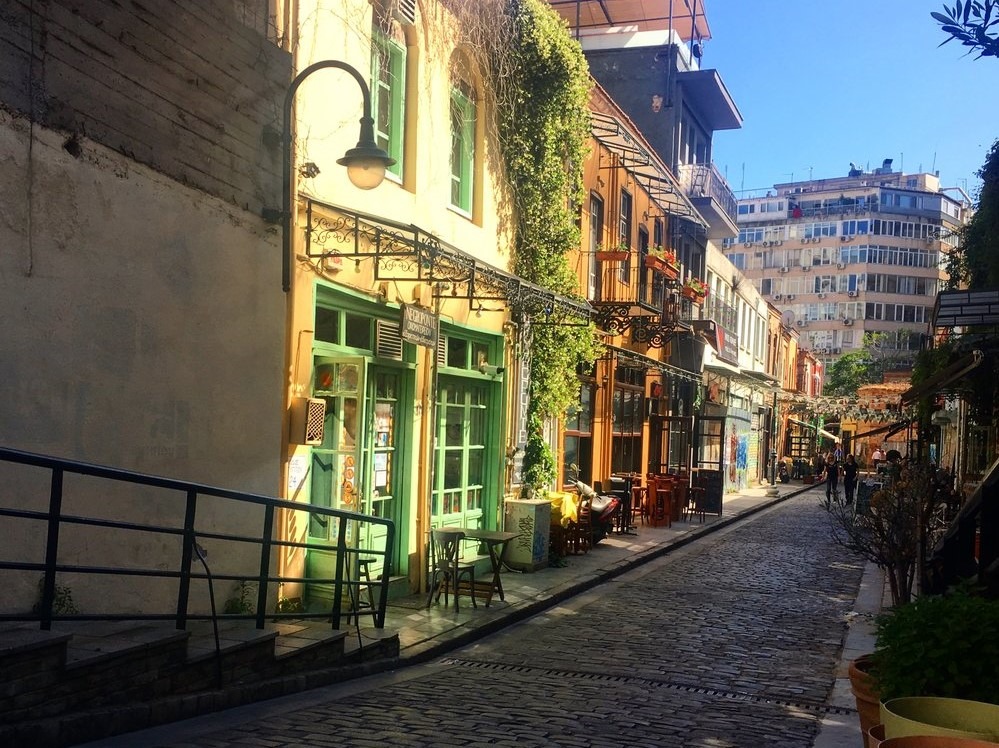 So you’ve got 24 hours in Thessaloniki to see all the sites? No problem! Even though the city will so utterly charm you that you’ll be desperate to stay longer (or come back soon), it is possible to see a lot within a short amount of time. Because the city is fairly compact, you can get around town relatively easy — no city site is more than 30 minutes from the centre by public transport. If you want to ride the public bus system, the Organisation of Urban Transportation of Thessaloniki (O.A.S.TH.), connects the whole city via a dense network of bus lines. You can get your tickets at the O.A.S.TH. ticket booths, at many shops, or from vending machines inside the buses.

Begin your day with a classic bougatsa (sweet pie with cream), koulouri (sesame bread) or a fresh spinach pie — it’s the most traditional way to start your day! And of course coffee. Nobody in Greece starts the day without coffee, and since the cold coffee drink known as ‘frappe,’ a favourite among locals, was invented in Thessaloniki, you should definitely give it a try.

You can have your coffee in the city centre, by the sea or at Ano Poli (the upper part of Town), enjoying the panoramic view of the city. (We recommend Estrella for a bougatsa and coffee together.) The Thessalonians always combine coffee with shopping in the city’s busy markets such as Kapani and Athonos Square.

Is there any better way to start your day than with a pastry? | Photo by Thessaloniki Urban Adventures

From the city centre, wander for about 10 minutes over to the Bit Bazaar market area. Stroll around the antique shops, which narrate the story of Thessaloniki. Bit Bazaar was a small refugee settlement built in 1928 for refugees from Asia Minor, but today it hosts many little shops and venues. It is located between Olympou, Venizelou and Tositsa Streets, surrounded by high apartment buildings. The side entrance leads to the central square, which is dominated by small two-storey buildings. The Roman Forum and Alatza Market are also located nearby.

In recent years, numerous cafés and meze bars (taverns) have opened up in the area around Bit Bazaar, and are a popular hangout for young locals, especially students.

Lunch suggestions are endless in Thessaloniki! If it’s summertime, we recommend you eat along the waterfront, but during the rest of the year you can enjoy lunch either in the city centre or in the Ladadika neighbourhood. It’s about a 10 to 15-minute walk from Bit Bazaar — and trust us, it’s much faster to walk around the city centre than use a taxi or public buses.

If you decide to eat in the city centre, then visit Rouga. It serves amazing food at a great location (along a pedestrian street) and is brilliant value for your money. It’s located in the historical heart of the city.

Another suggestion is to go to a tsipouradiko. All over Greece, mezedopolìo or tsipouradiko are a type of a restaurant, where together with a small glass of tsipouro or ouzo (local alcoholic drinks), you’ll have a small appetiser to taste. There are no main plates at these restauarants, only appetisers, but it’s a great way to taste many different dishes and recipes in a single meal. One of our favourites in the city centre is Bazagiazi in Modiano Market and Full tou Meze at Ladadika Square. Both serve amazing meze dishes with meat and seafood. 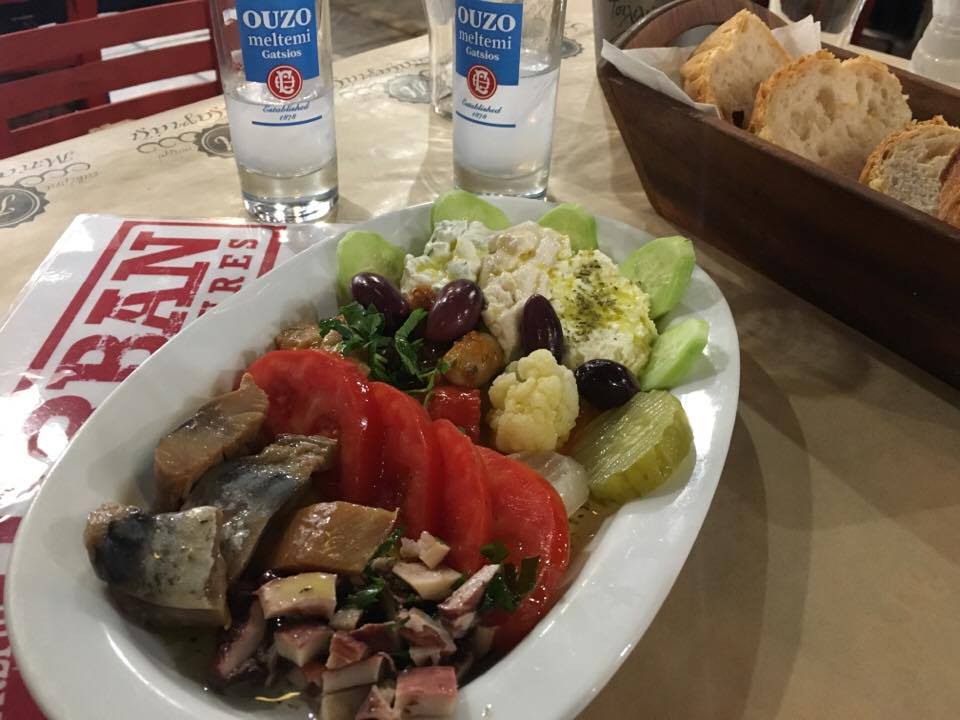 For a truly local lunch, go for a raki and some meze | Photo by Thessaloniki Urban Adventures

Walk off your lunch by exploring the city’s upper town (Ano Poli). The area of the Upper Town of Thessaloniki survived the big fire of 1917 so it remains relatively untouched by modern architecture. It is situated in the north part of the old city, starting from St. Demetrios Street. Among the places to visit we suggest the Heptapyrgion, built during the Ottoman period (in 1431) and which used to be the headquarters of the military governor of Thessaloniki, and the Vlatadon Monastery, which was founded in the middle of the 14th century by the Vlataioi brother monks.

Many of the current houses in the old town of Thessaloniki were built during the Ottoman Period, and some have spectacular views to the sea. In this region you will also find many Byzantine churches that are UNESCO-listed. Monuments from the Ottoman period, such as baths, hamams and mosques, also exist in this area and can be visited. If you walk around here until the early evening, be sure to grab a coffee or drink and admire the sunset.

To reach Ano Poli, from Eleftherias Square, take bus line number 23 towards Ano Poli or the Cultural Line Bus (No 50), which has a stop there. You could also reach the area on foot, but bear in mind that it is a 30-minute walk uphill (“upper” town, remember). 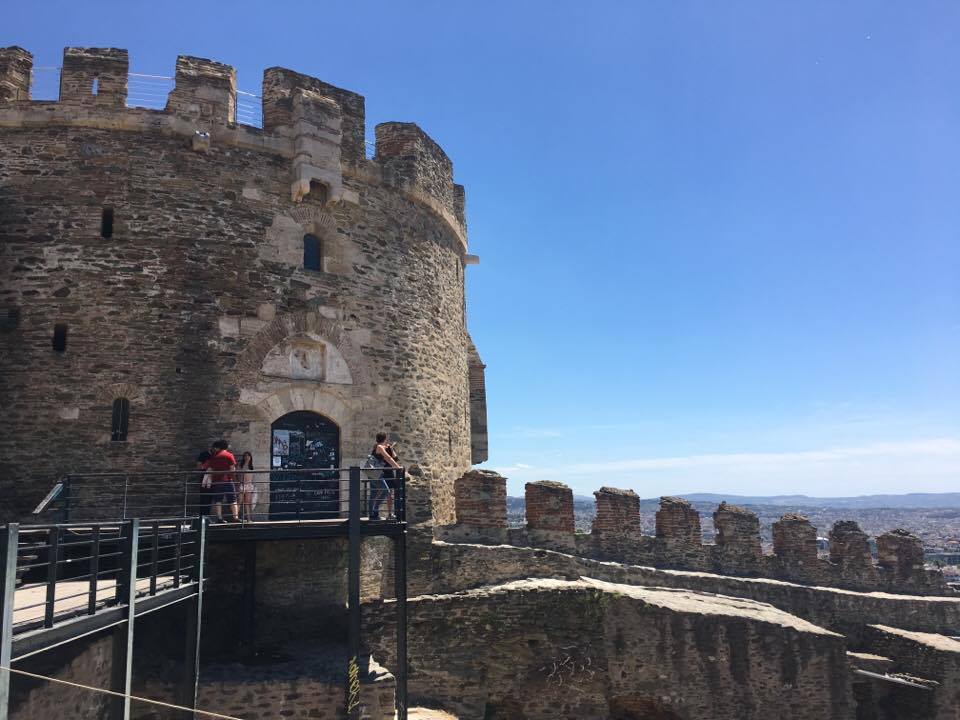 If you are still in Ano Poli (Upper Town), visit Tsinariou Square, where you’ll feel like you’ve left the noisy city behind. Climb the narrow streets of Tsinari with its small houses and flower gardens, then relax while tasting delicious food and good wine or raki in one of the picturesque meze bars with Asia Minor influences.

Our pick for the best flavours of old Thessaloniki is Ouzeri Tsinari, in the central area of Upper Town. Or just pick what looks appealing among the many small restaurants in the area. The whole area is lovely and you’ll have no trouble finding a charming place to dine.

If you don’t have a full 24 hours, you can still squeeze in some Thessaloniki exploring during a quick layover. You’ll need about four hours to get from the airport, do some sightseeing, and get back to the terminal. From the airport, it’ll take you about 30 to 40 minutes to reach the city centre of Thessaloniki.

You can quickly reach the centre of Thessaloniki (Aristotelous Square) via the A25 motorway; by car it takes about 25 minutes to cover the distance of 17 kilometres.

The OASTH buses 78, 78A and 78N run between Thessaloniki Airport and Macedonia Intercity Bus Station (KTEL) in the western part of Thessaloniki. Along the route you can get off in the city centre (Platia Aristotelous) and at the main railway station of Thessaloniki. A ticket can be purchased from the ticket machine on the bus, but keep in mind that the machine does not return spare change.

If you’re in Thessaloniki on a morning or afternoon layover, take the No 50 Cultural Bus Route, departing from the White Tower. It passes by monuments, important buildings and old neighbourhoods, narrating the historic wealth of Thessaloniki over history. Info is available for passengers in both Greek and English. You can also hop off the bus at any spot that piques your interest.

Another option would be to walk along Thessaloniki’s seafront. From the port to the Concert Hall of Thessaloniki, you’ll have a lot to see (and snap some Instagram-worthy photos!). Some of the notable sites include the White Tower, which is an imposing symbol of the city; the Statue of Alexander the Great on horseback; the “Umbrellas” sculpture, which is one of the most photographed and romantic places in the city; and 12 different gardens with lakes, small waterfall, tennis courts, a skateboard track, playgrounds and cafés.

Thessaloniki is considered one of the best cities to go out at night, so if you’re here on an evening or nighttime layover, you’re in luck! An evening in Thessaloniki is unthinkable without enjoying the local experience at a bouzouki club, or live music venue. Famous Greek singers regularly appear in the city’s large venues, with live orchestra and accompanied by a bouzouki, a traditional Greek instrument. If you can figure out the words, join in with the locals who are singing along! Most young locals hang out around the bars at Valaoritou Street and Ladadika for a first drink, and then visit the live venues.

Most of the neighbourhoods that are favoured by locals in the evenings have interesting architecture and concept stores. The locals are friendly and there is a plethora of different hangouts to choose from: for a dance club, we recommend Club Division, for a bar, we recommend Fragile Bar, and for a bouzoukia venue, check out the listings on the Kanokratisi website.