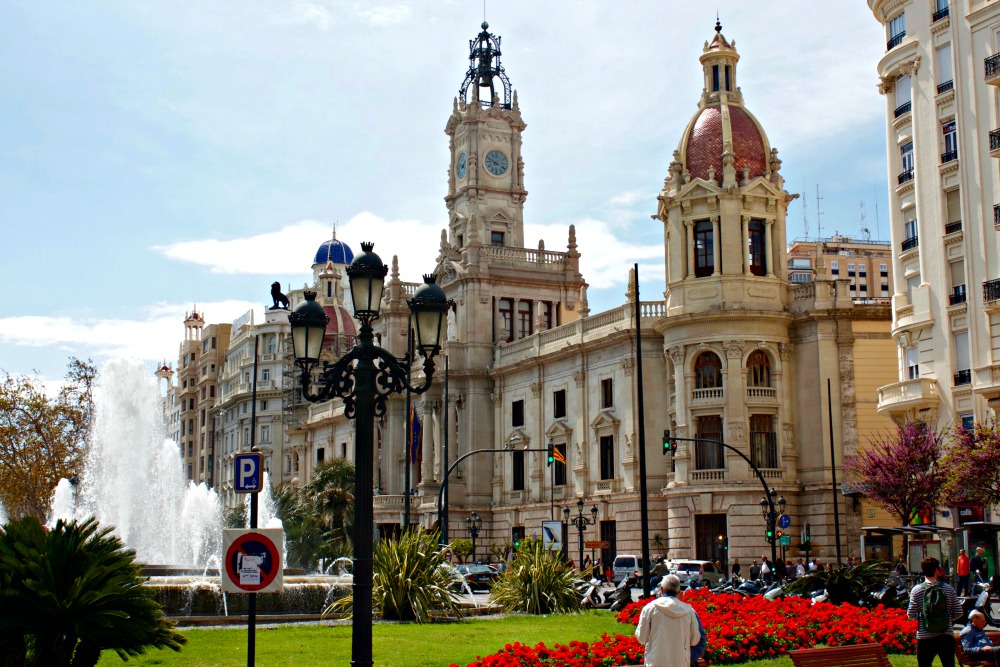 Valencia might not be the first city that springs to mind when you think of Spain, but we’ve got just as much street cred as Madrid or Barcelona. We’ve got the second narrowest house in Europe, the largest oceanarium in Europe, a monstrous church bell, the largest toy soldier collection… should we go on? If new experiences and interesting sites are your kinda thing, read on and check out our local Valencia tour guides’ suggestions on what to see and how to eat your way through the city in a mere 24 hours!

Start your morning bright and early at the city centre! A stroll through the quieter pedestrian streets towards Plaza del Ayuntamiento (Plaça de l’Ajuntament), a big square-shaped open space in the middle of the city, bordered by rows of fragrant floral kiosks.

On one side is the stately City Hall building, and on the other, an even more impressive Edificio de Correos. But hey, this is no ordinary central post office. Many people have entered the building on the pretense of buying stamps just to see the ornate interiors and the decadent stained glass ceiling. After visiting this unofficial tourist landmark, continue along the plaza, where you’ll pass by a postcard-worthy site: the dancing water fountain set against a backdrop of art-deco buildings — very European.

Did you know that Valencians can typically eat up to five meals a day? You can too! For your first meal of the day, desayuno, I recommend stopping in at Dehesa Santa Maria, an unpretentious corner cafetería on Avinguda de María Cristina for a croissant with café con leche (espresso with milk) or pan con tomate (toast with freshly grated tomatoes and olive oil). Don’t be tempted to load up on the eggs or bacon, as this is only the start of your food-filled day!

With bright eyes and a full stomach, head over to Mercado Central. Sniff your way through the overflowing bags of spices, taste some freshly carved jamón (ham), listen to the fishmongers bellow daily specials like auctioneers in action. It’s definitely sensory overload, but it’s a chaotic scene you’ll enjoy! Pick up some paella spice mixes, Valencian orange liqueur, or Chufa (tiger nut) oil as gifts — it sure beats getting a magnet as a souvenir! The market is open from 7am – 3pm on Mondays through Saturdays. It can get quite crowded especially on Fridays and Saturdays, so watch out for the little ladies with their wheelie carts! If you would rather have a fun, local guide take you through the markets to taste some beautiful food along the way, check out our Valencian Treats and Tastes tour!

Right across from the Mercado is the UNESCO World Heritage Site Llotja de la Seda (La Lonja). This 15th-century building was used for trading silk (hence, the Silk Exchange), and was an important commerce hub in the city’s early days. The Gothic architecture is sure to impress any architecture buffs.

As you take your last picture of La Lonja, turn right at the exit and walk towards the small square called Plaça del Dr. Collado. Eat your late morning snack, almuerzo, outside, as you people-watch and enjoy the beautiful view.

Bar El Kiosko would be my pick, one of the old-school restaurants in the area where food is cheap and delicious. Typically consumed during this meal is a bocadillo (baguette sandwich) with your choice of fillings: jamón, tortilla de patatas, or even fried calamari rings! And trust me, you’ll want this snack to hold you over till you have a late lunch. Oh, and did I mention that almuerzo is when most Spaniards take their first beer of the day? Bonus!

If you have a sweet tooth, head to a horchatería instead for a horchata (orxata), Valencia’s traditional dairy-free beverage made with chufa (tiger nuts). A tigernut horchata is packed with so much flavour, vitamins, and minerals, you won’t want to go back to plain H2O. Enjoy this like a local and order a fartón to dip into your horchata. A good place to try this is Horchatería El Collado, serving their best horchatas since 1892. It is just a few doors down from Bar El Kiosko. Once you’re all fuelled up and ready to go, walk the back streets starting from Carrer de la Purissima till you find a small hidden laneway church called Parroquia de San Nicolás on Carrer dels Cavallers. If you only visit two holy sites today, make this one of them. Some call it the mini Sistine Chapel, and it’s one of our best-kept secrets in Valencia.

After exploring the hidden church, follow Carrer del Serrans all the way to Torres de Serranos, a set of medieval 14th-century Gothic tower gates that were once part of the ancient city walls. For a fare of EUR 2, you can climb all the way to the top for great view of Valencia’s Turia Gardens, that once bordered the city.

After that tower climb you must be famished. Lunch in Valencia is known as la comida and it’s supposed to be the biggest meal of the day (woohoo!). La comida is usually served starting at 2pm, which is why most good restaurants aren’t open till 1:30pm.

If you backtrack on that same street you came, you’ll find many dining options. We love La Cigrona, a great little restaurant with beautiful Valencian cuisine. Maybe give our city’s pride and joy, paella Valenciana, a try? If you’re an animal lover who can’t bear to see a rabbit in your meal, try the arroz meloso, a creamy rice dish that rivals a good paella. How about the noodle version of paella called fideuá? There are just so many options to choose from! Paella is just so so good! We don’t know what else to say!

As you slowly digest that hearty lunch, walk a short distance to our famous Plaza de la Virgen, which I call the trifecta of religious monuments. You’ll see Neptune lounging in his glory on the fountain, the beautiful pink basilica, and the Valencian Cathedral with the adjoining Miguelete Bell Tower. If you’re looking to get a workout in, climb up the 207 steps and you’ll be rewarded with the best views of the city, and a sight of the 7,000-kilo giant bell that we mentioned earlier. If not, take it easy and stroll through the Cathedral where you’ll find the Holy Chalice of the Last Supper.

Who needs an excuse to have the best gelato in Spain, especially when it’s right at your doorstep? Head over to the award-winning Véneta gelato shop that’s right next to the main entrance of the Cathedral — you won’t miss it. You’ll be glad to sit down and relax after all this chaos!

After wandering around, I’m guessing you’ll be tempted to have a late afternoon snack at one of the many cafés with outdoor seating… don’t fall for the tourist traps! I’ll direct you somewhere that’s much more worthy of your time.

From the Cathedral’s main entrance, walk down the busy strip known as Plaza de la Reina. Take a right into the inconspicuous Plaça de Lope de Vega to find a small, maroon-walled, corner bar called Tasquita La Estrecha. Their claim to fame is their location next to (what used to be, now the second) narrowest house in Europe, which is only 107 centimetres wide. At this point, if you desire your fourth meal of the day, la merienda, then grab a table, rest your feet, and enjoy a quick tapa and a glass of local wine. Or join the overflow of restaurant patrons basking in the sun, leaning against the walls of the adjacent church with a glass of wine in hand. Or if you have a sweet tooth like the locals, go for an horchata de chufa or even a pastry! And wait, we’re not finished just yet — right next to the restaurant you’ll see an old, abandoned shop covered with giant floral wool knitting on its storefront. Who says street art is simply paintings on a wall?

If you’re tired from a long day of exploring, head back to your hotel to rest. If you’re willing to push through the tiredness and go out to explore, an exciting night awaits you!

Well rested? Awesome, let’s hit the streets again! This time we’re headed to the barrio of El Carmen, still within the historic centre of Valencia. El Carmen is hipster, eclectic neighbourhood where you can find a bit of everything!

You’ll find everything from a myriad of local designer stores, tiny artisan handicraft workshops, and more bars, restaurants, and clubs than you can count! Most places won’t serve dinner until 8.30pm, so take a walk around or settle in for a few drink to get your night going. If you fancy a good cocktail, Agua de Valencia might just do the trick. It’s a delicious concoction of fresh orange juice, cava (Spanish sparkling wine), and gin and vodka to spice things up.

Street art is also a massive feature of El Carmen. If you are tired of museums and church visits, let us save you the hassle and guide you through the confusing laneways to uncover some of the best street art this city has to offer.

El Carmen is also the perfect place for a tapas crawl or any international fare that tickles your fancy.

Still not giving up on your 24 hour adventure in Valencia? Dance into the wee hours of the night at a bar or club. Looking for something a little more chill? Check out Jimmy Glass Jazz for a slow wind-down.