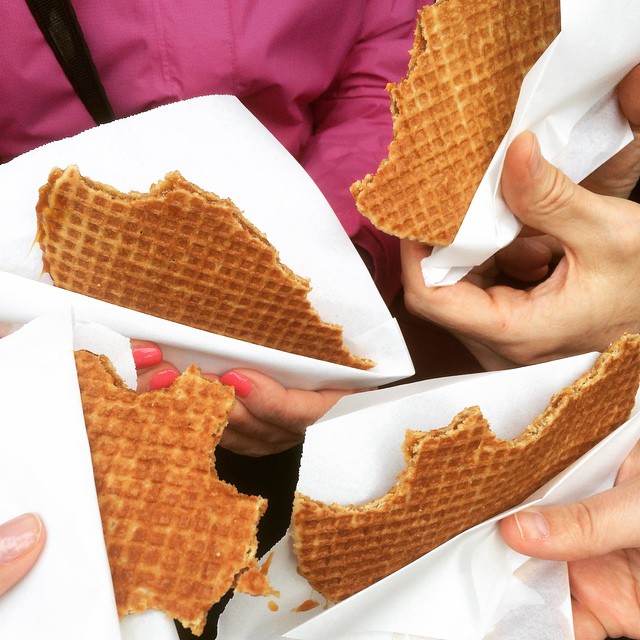 Europe is good at a lot of things, like football, drinking beer, and undermining each other politically (see: Belgium’s 2.50 € coin for the most recent example). But there’s being good, and there’s kicking ass, and in our opinion, Europe kicks ass at two major things: food and trains.

The continent has managed to cram more than 50 countries into its borders (seriously), all with varying cuisines and culinary traditions, and almost all just a train ride away from each other. Given that our favourite ways to explore Europe are through its tastes and its rails (and we imagine we’re not alone in this), we married the two and would like to present our list of must-try snacks in Europe — perfect for those hungry train rides (or anytime, really).

Ohhhhhh stroopwafels. These thin treats are little legends, earning their status bite by syrupy bite. They’re a favourite in the Netherlands (and beyond), due to their cinnamon-caramel filling and soft-hard dough. Stock up at a Dutch supermarket and feast your way along the rails. You can sometimes find them in other European countries, but don’t count on it, so be sure to get your fix while in the Netherlands!

Trust Italy to be the one place where train station food is actually good. You can find panini in pretty much every Italian train station, and we dare you to resist buying one for the journey. Go simple — mozzarella, basil, and prosciutto is all you need, darlings. It’ll be the happiest train ride ever.

Yeah, yeah, you could feast on a baguette or cheese or wine, but no train snack makes you feel as fancy as a French macaron. A box of these will make the TGV ride even faster and posher than it already is. Pinkies out, annnnnnd nibble!

Sammiches! Tortilla sammiches! Much like Italian paninis, bocadillos are in most of Spain’s train stations and bocadillos de tortillas are king. These aren’t your average sandwich — they’re basically Spanish omelets (“tortillas”) nestled within a baguette. Right? Right?! Get one for the train — you won’t regret it.

Of course the Ancient Greeks were the first to make ‘power bars’ (and none of this chocolate and peanut butter nonsense…real power!). Pasteli are sesame seed candies with nuts and honey and they’ll give you the strength to make it through the good and bad of Greek train travel — a bite of these and that delayed train will go from rage-inducing to ‘meh’!

Even though paprika isn’t just a Hungarian thing, it’s most commonly associated with Hungarian food, so we’re going with it. If you’ve been to Hungary (or some other European countries), you’ve probably seen paprika flavoured chips/crisps, and we really hope you’ve bought them when you’ve seen them because daaaaaaaaaaamn they’re tasty! Haven’t tried them? Go back to Europe and do so, ASAP. You’re welcome.