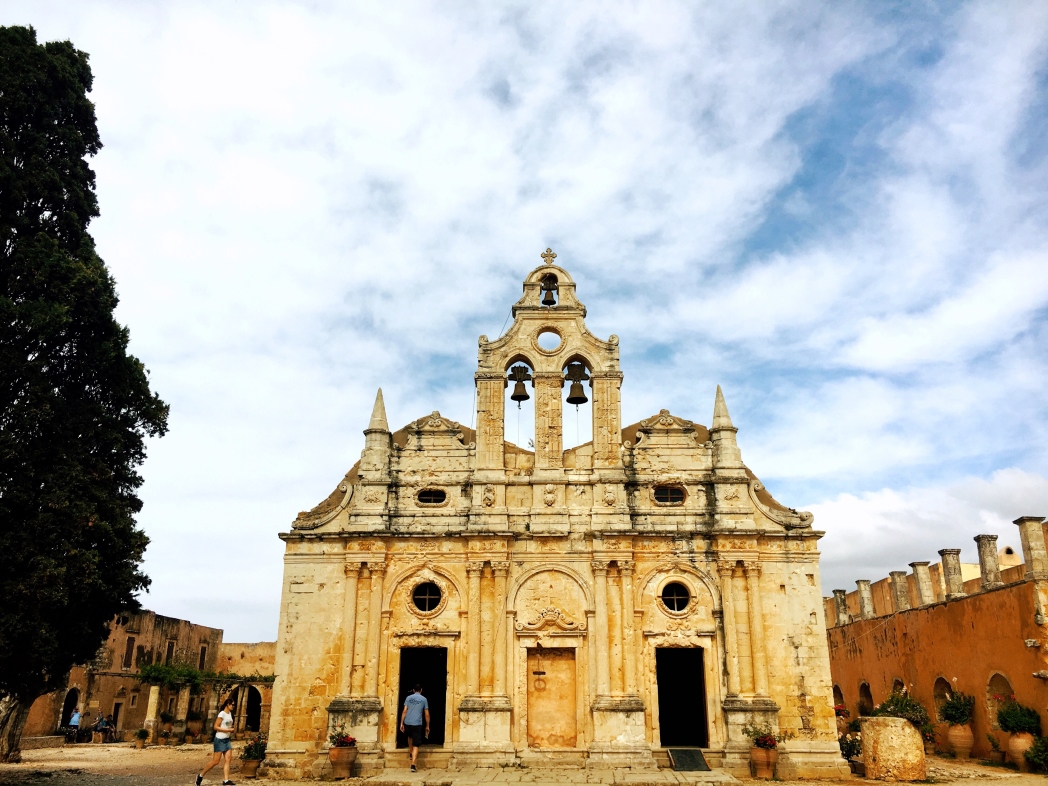 Being the biggest island of Greece, Crete can offer so many unforgettable moments, from the exotic seashores, to the the fascinating mountainous terrain, to its traditional villages brimming with history. Don’t know where to start? We’ve narrowed down the top seven day trips in Crete which should definitely be on your travel list.

If you’re not in the mood for an hour-long hike to Samaria Gorge, the most famous Cretan gorge and longest in Europe, you can discover another spectacular gorge in Crete: Therisso Gorge. Start your tour from Chania and drive through the bed of the gorge where you’ll be impressed by its dramatic scenery, complete with vertical cliffs, lush vegetation and a tree-lined river. The gorge ends at the historic mountainous village of Therisso, built at an altitude of 580 metres and where a revolt took place in 1905 that led, some years later, to the union of Crete with Greece. Stroll through the fascinating village and enjoy the famous Cretan lamb and meat dishes in one of the many traditional tavernas, or continue your exploration at the foothills of the beautiful Lefka Ori (White Mountains), where you’ll discover off-the-beaten-path villages, unique family-run farms with organic food, and impressive wineries.

Get out of Chania and work your way down to the unspoiled south coast of Crete with its outstanding beaches, lost ancient cities and breathtaking gorges. Visit the village of Sougia, a hippie landmark in the past, and today, a favourite place for naturists. Spend some time relaxing on the beach in front of the village, and then experience the laidback atmosphere of the village by enjoying the view while sipping your coffee or raki and eating fresh fish in a seaside tavern. From Sougia you also have some hiking opportunities such as the forested gorge of Agia Irini, or if you feel more in an Indiana Jones mood, try the small gorge that starts from Sougia harbour and ends in the ancient city of Lissos. The harbour has an incredibly peaceful atmosphere and a small, beautiful beach.

Sfakia, in the far west of Crete, is a wild, unspoiled region | Photo by Crete Urban Adventures

Hit the road to the far west part of Crete to the wild and unspoiled region of Sfakia to experience deep traditions, proud Cretan people, memorable scenic routes and endless wild landscapes. Leave Chania behind and head all the way through the Lefka Ori (White Mountains) that lead to Chora Sfakion, the main village of the region. Have your camera ready to capture the endless views of the Libyan Sea. Explore the mountainous villages of Anopoli, Kalikratis and Askyfou set on dramatic points, and discover the region’s coastal beaches and villages, some of which you can reach only by boat or hiking. Experience an authentic, epic adventure in one of the island’s most iconic corners.

Arkadi Monastery and beyond

Starting from Rethymnon city, explore the hilly part of the greater Rethymnon region by visiting Arkadi Monastery. Built on a fertile plateau with striking natural beauty in the northwestern foothills of the highest mountain in Crete, Psiloritis Mountain, the fortressed Monastery of Arkadi is rich with history and legends as it was the most sacred symbol of the Cretans’ struggle for freedom. Head even further to the rolling hills of Amari valley, a lush green area with picturesque villages such as Fourfouras, Amari and Meronas, with Minoan settlements, unknown gorges, abandoned churches and memorable views of the surrounding mountains. Here is the blooming backyard of Crete — enjoy it!

Cretan vineyards account for almost 13 percent of the wine regions of Greece, with the Heraklion territories of Peza, Arhanes and Dafnes being the most popular and honoured with PDO-level (Protected Designation of Origin) appellations. Start this wine route by visiting Knossos Palace and archaeological site, the landmark Minoan city known as Europe’s oldest city. Take the scenic routes through the eastern foothills of Psiloritis Mountain and stop in any of the region’s 23 wineries where you’ll sample different labels of the native grape varieties such as Vidiano, Kotsifali, Mantilari and Vilana. Or, try some innovative blends with the locally produced international varieties of Syrah, Cabernet Sauvignon and Sauvignon Blanc. If you feel like going further south, visit the Palace of Phaistos, the second largest palace of Minoan Crete after Knossos.

If your base is in eastern Crete, you can’t miss visiting Spinaloga, where you’ll find the second most popular archaeological site in Crete after Knossos Palace. Catch a boat from the charming village of Plaka, located in the stunning setting of Mirabello Bay, and explore the outstanding fortress islet of Spinaloga with its turbulent story starting in the 16th century as an important Venetian fortification against the Ottomans. Immerse yourself in the islet’s quirky mysteries by strolling around its alleys and the abandoned village where lepers from Crete and the rest of Greece were quarantined until 1957. A walk around Spinaloga can offer you some of the finest views of the clear blue sea surrounding the island.

Venture to the Lasithi region of eastern Crete and discover one of the most pristine corners of the island. Explore the hilly countryside of Lasithi by visiting the traditional village of Kritsa with its old houses and narrow streets. Continue your tour to the ancient forest of Kroustas that has been consistently colonised by humans for the last 4,000 years. If you feel adventurous, follow the dirt roads of the area that lead you to spots with stunning vistas and hidden churches, where you might meet local shepherds in traditional Cretan huts, something that can transform your trip into an even more unique experience.