Blog > San Sebastian: Basque Christmas traditions you should know about 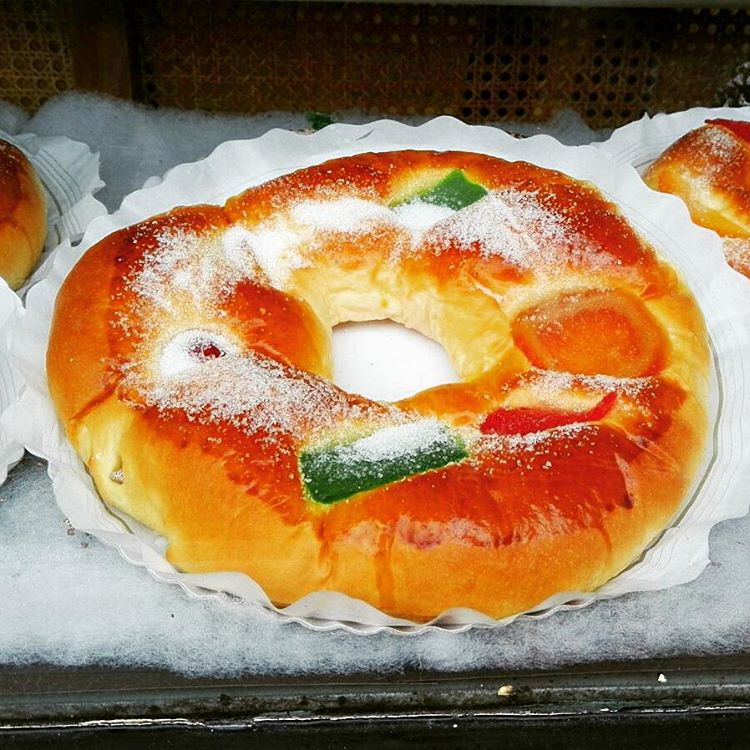 San Sebastian: Basque Christmas traditions you should know about

If you’re familiar with Basque culture, then you probably already know our traditions have pagan roots. In fact, we Basques feel very attached to our pagan heritage, even if we also commit to religious festivities like Christmas. That’s why, during the Christmas season, there is a mix of traditional Basque celebrations as well as more Christian traditions from other areas of Spain. (Because really, Christmas is one of the celebrations that brings us all together!) We’ve listed out the big days below so you can plan your agenda if you’re in town. And just remember, throughout it all, be prepared to get stuffed with lots of food!

Initially, Santo Tomás Day was nothing more than “Tax Day” in the Basque Country. The tradition dates back to the 19th century, when Basque farmers would travel to the main cities such as San Sebastián on December 21 to pay rent to their landowners. They eventually decided to take advantage of the travel day and also sell their goods and fresh products, enabling everyone to stock up on items they couldn’t get in their own villages. It wasn’t long before the December 21st market day had become a custom.

Today, Santo Tomás is about more than that (and is no longer exclusive to cities). Farmers bring their cattle and pork for everyone to admire, while traditional Basque music can be heard in every corner and different products are raffled off among the locals. But really, what makes the Santo Tomás Fair so special is the folk costumes that we finally get to wear — every Basque has their own traditional garments, so bring your txapela (Basque traditional cap) or try on a traditional Basque gown!

Of course, the other thing we do at Santo Tomás is eat! Talo is a mandatory food to try. These treats are made from a crêpe-like dough of corn flour, water, and a bit of salt, wrapped around txistorra. Txistorra is our local version of chorizo and is a fast-cured sausage with a very intense red colour. This classic recipe is absolutely delicious and is typically combined with a bit of txakoli (a dry white wine). In the past, talos would be eaten as a substitute for bread. However, with the massive generalisation and consumption of bread in the 20th century, talos were pushed into the background and are now only eaten on special occasions. If you are not into txistorra, don’t worry, there are other options for you — today, talos can also be ordered with bacon, ham, cheese, chocolate, or honey.

This is the most important lottery day in Spain, although it doesn’t necessarily have the biggest prizes to win. There is a widespread tradition of participating in Christmas Lottery Day, when you must be up by 8am to follow the raffle live on TV to see if you won a few thousand euros!

While there are plenty of different prizes, what everyone really wants to win is ‘The Fat Prize’ or, as we call it, El Gordo. Each lottery ticket worth EUR 20 can give you a total amount of EUR 400,000 with this grand prize. And if you have more than one lottery ticket with the lucky number, then everyone is going to be very jealous. So hide or flee but keep quiet! It’s often better if people don’t know you won The Fat One.

All the prize-winning numbers are chanted by the children of San Ildefonso School, the oldest school in Madrid. And the children who sing the juicy numbers often become quite famous at school and even throughout Spain. 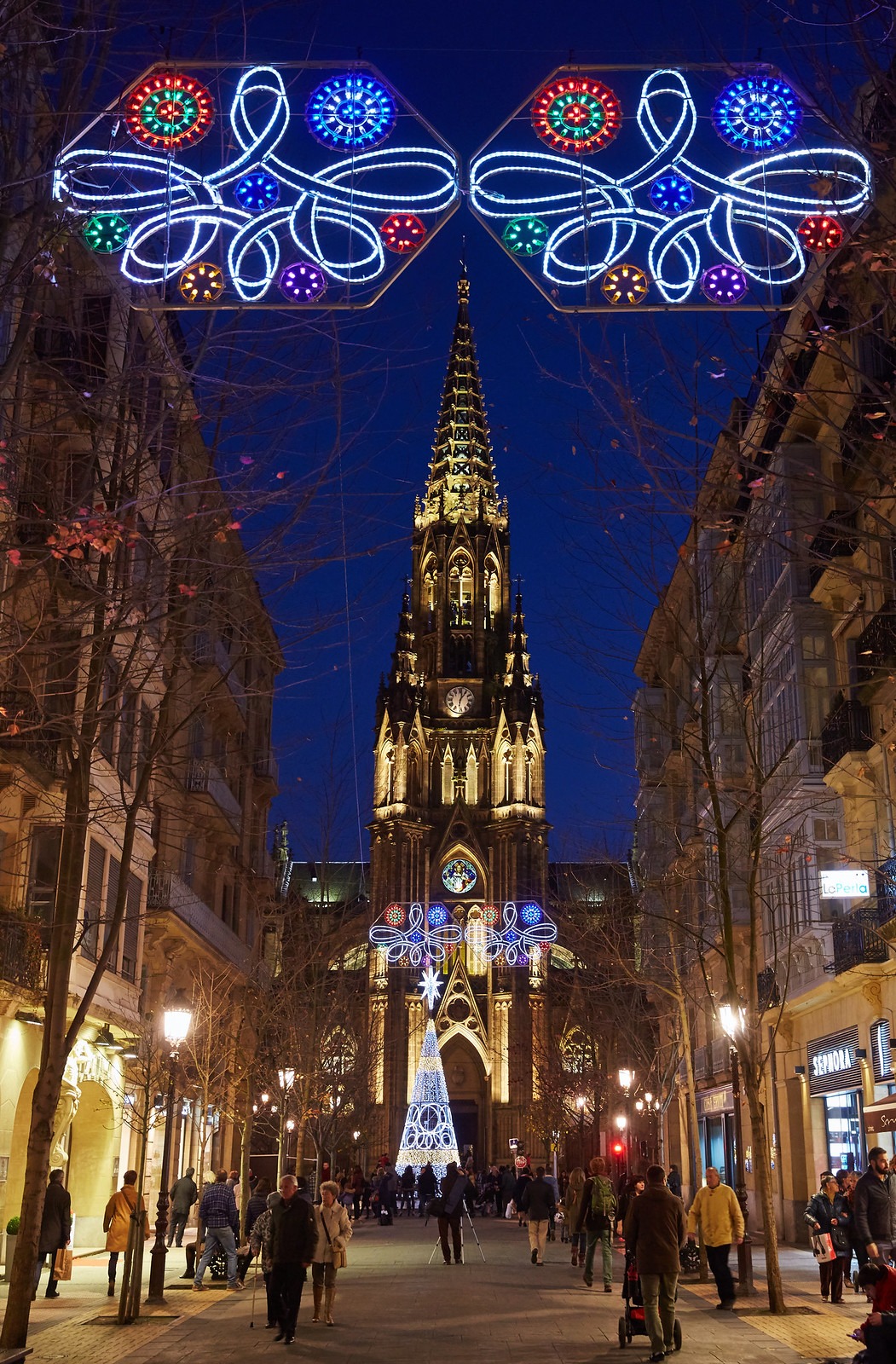 Nochebuena in Spanish, Gabon gaua in Basque: these two ways of celebrating Christmas Eve are similar but also different. In most autonomous regions, it is on Christmas Eve that Santa Claus (or Papá Noel) comes home as you sleep to leave your presents behind the Christmas tree. But in the Basque Country, we have our own Christmas figure, Olentzero, and it is before Olentzero arrives that we hold a special celebration. On the morning of Christmas Eve, all Basque schoolchildren gather to sing Christmas carols in their respective villages. At night, they get to see Olentzero in small parades all along the village streets.

Like Santa Claus, Olentzero comes into your house using the chimney or climbing up your balcony with a ladder, and the presents under your tree are proof that he’s visited while you were asleep. Olentzero is a gentle, chubby old man who works in the mines, smokes from a pipe, and lives in the mountains. He loves eating and drinking wine, and every Christmas, he brings presents to the good and coal to the bad. Most children have been given “coal” sometime in their childhood (actually an edible black piece of sugar). As a mythological character who survived Christianisation, Olentzero has had many shapes (a human, a giant), different names, and stories that vary from village to village.

The Spanish April’s Fools falls on December 28, and involves a great amount of fun and silly pranks, or inocentadas. When people get caught in these pranks, they are called inocentes. The media and press are even involved in the festivities; at night, special galas are celebrated with pranks on celebrities, and nationally known artists even perform for the occasion. A typical inocentada is to stick paper dolls on your back without you noticing.

New Year’s Eve is all about spending time with family, drinking lots of champagne and cava, and waiting for midnight. Oh, and wearing red underwear! (They say it’ll help you to find love this year.) At midnight, everyone who isn’t at the Plaza del Sol turns on their TVs to see the bells chime 12 times live from Madrid. At each bell, you must eat a grape. Believe me, it’s harder than it sounds — you have to time it just right or they say you’ll have a very unlucky year.

There are still two more family gatherings to attend! But don’t worry, this is one of the last; by this time, people are often feeling finished with the amount of social commitments over Christmas. Hungover and sick of so much food, everyone wants this day to be over. But really, this is what the Christmas season is all about, right?! And if you are in the Basque Country, you have to follow our rhythm. We. Eat. A. Lot. 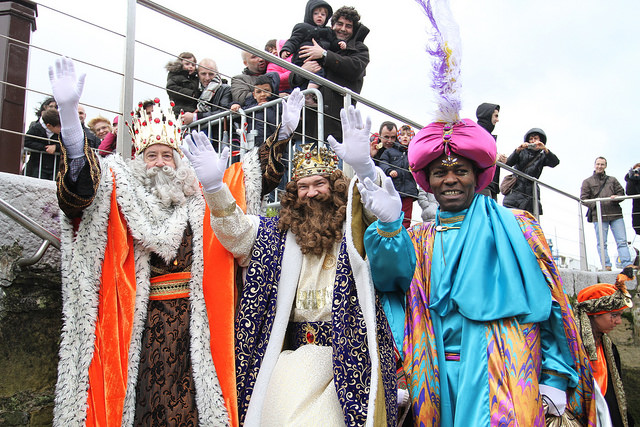 Melchor, Gaspar, and Baltasar are the Three Wise Men who visited Jesus right after his birth. They brought different gifts to him: gold, incense, and myrrh. Just like Papá Noel and Olentzero, these distinguished kings come bearing gifts and are probably the most traditional image of Christmas festivities in Spain.

During the morning, children open presents and everyone eats a sweet and creamy cake called roscón de reyes, or king cake. Traditionally, king cakes have a broad bean or a trinket inside, and whoever gets those will have to pay for the cake. This tradition goes back to the Roman occupation of the Iberian Peninsula and used to be celebrated in honour of Saturn. King cakes were given to peasants and servants, and whoever got the bean had the privilege of being called ‘king of kings’ for a few days, thus, the name of roscón de reyes.

So now that you know how locals in the Basque Country celebrate Christmas, perhaps you’d like to see it for yourself? At Christmastime, all Basques are highly hospitable and will be absolutely pleased to introduce you to our traditions. So grab your things and visit us in the Basque Country; you can even borrow a folk costume from us when you join the party!