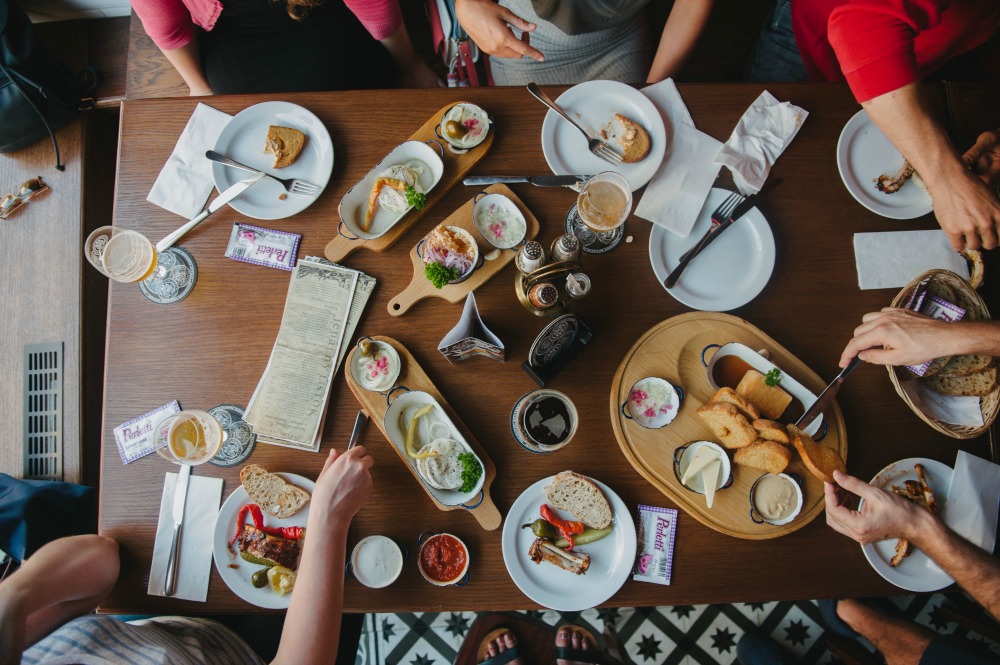 Ah, travel — it not only broadens your mind and teaches new things, but it can also be heaven on earth for adventurous foodies. While I personally love seeing new sights, there’s nothing that makes my stomach — and subsequently, my heart — happier than trying some tasty new treats in a new country. When I made my way down to Bratislava, Slovakia’s “little-big” capital with a whole lotta heart and some amazing culture, I wasn’t entirely sure what to expect from the food scene. Yes, I’d travelled around Central Europe before and had knowledge that a lot of our cuisines had influenced each other over the years, but I wasn’t sure exactly what I’d be able to taste when Bratislava Urban Adventures showed me around their eclectic capital. So what should I have been expecting? Turns out, a whole lot of delicious variety!

Like many landlocked, centrally located bits of geography, Slovakia is into food that’s heavy on the comfort. It’s hearty food for hearty people, and while those who prefer salads may balk at the idea, you’ll have no regrets ordering the standard hearty meat or starches in supremely tasty sauces throughout the trip. Besides, Bratislava’s got so many cool things to see, you’ll be walking off the calories in no time. 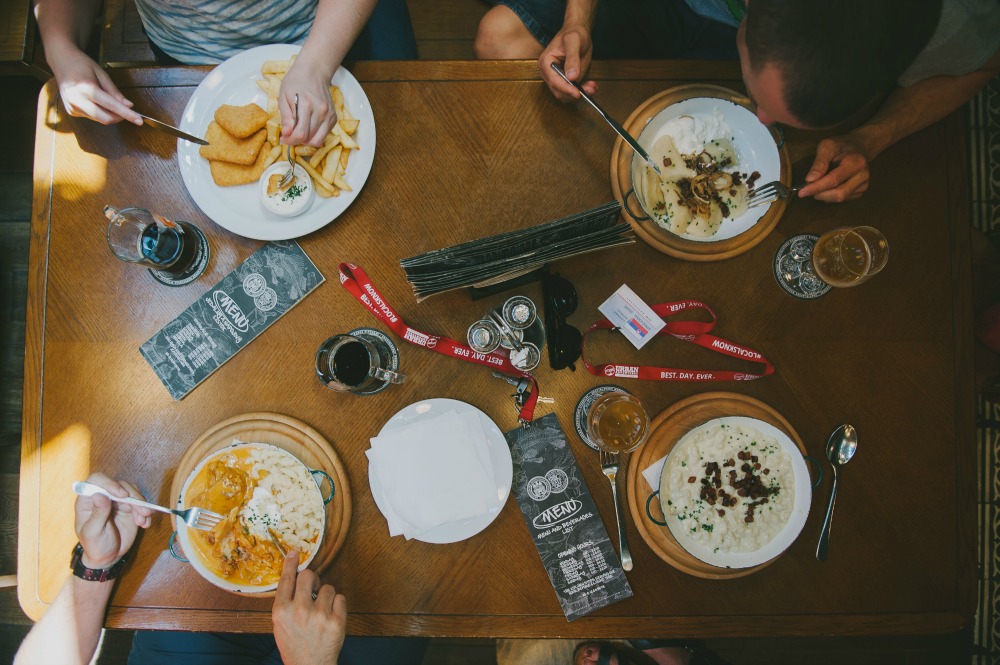 If you only try one thing, make it halusky | Photo by Alexandra Siebenthal

First thing’s first, there’s no way you can go to Slovakia and not try a little dish called halušky. What is it, you ask? I like to think of it as all of the best bits of mac and cheese plus an insanely delicious Central European twist. Halušky consists of what you might call a noodle (some would argue a dumpling — many English versions of menus have translated as gnocchi). While I won’t sit here and argue semantics, I will say that basically all of these descriptions are correct. The noodle camp may be confused by the shape, which is more gnocchi-like than anything else, but hey, what are gnocchi but tiny potato noodles? And what are dumplings but larger versions of those potato noodles? The debate could go on and on. The gist of it, though, is halušky is the ultimate comfort food.

The gnocchi backbone of the dish is then smothered in a cheese sauce made of not just any cheese — no, this Slovak staple is smothered in sauce made with the traditional bryndza cheese, which #localsknow is best when it comes straight from the farm (although it’s still just as tasty — and a bit safer — in its pasteurised form served up in Bratislava restaurants). This decadent dish is then topped off with a bit of hot, tasty bacon to provide the ultimate culinary solution for when you just want the travel foodie equivalent of your childhood faves. It’s like having a long-lost Slovak grandma to give you a warm hug.

After sampling the heavenly halušky, you may be wondering if any other flavour combo could compare. It’s a hard job, but I’m here to tell you that Slovak food won’t let you down. A great follow-up dish for your culinary passport is chicken paprikáš, or chicken in paprika sauce. Made by slowly simmering chicken in a paprika cream sauce, it’s a tender, tasty, and uniquely Central European dish that will have you wondering if that long-lost Slovak babka has struck again. Usually served up with small potato dumplings/gnocchi/whatever, it’s perfect for a cold winter’s day or even just to provide the adequate fuel for exploring the city on a hot summer’s one. Wash it down with some refreshing local beer and you won’t care during which season you eat it.

Your life has been missing svíčková | Photo by Alexandra Siebenthal

Yet another comfort food dish you must try in this part of the world is heavy on flavour as well as content — sviečková is the Czechoslovak specialty you won’t know you’ve been missing in your life. Made by slow-roasting beef sirloin over some sumptuous veggies, which then become part of a cream sauce to cover your beef, this dish is as quality as it is an ordeal to make. I say this as a foodie who loves to cook and recreate my favourite meals at home (it’s the best kind of souvenir!), but svíčková is one of those things that I almost always order out, or, if I’m lucky, sample it homemade from a friend’s family’s kitchen on a special occasion. It’s generally served up with fluffy bread dumplings (for more info on those, see Prague Urban Adventures’ definitive food guide), and if you’re anything like me, the plate will look almost spotless when you’re finished. For all of you carnivores out there, it’s a must-eat.

I know, I know. So far, our Slovak menu has been rather heavy on the meat, but rest assured, my non-carnivorous friends! There are still plenty of non-meat dishes for you to enjoy during your taste tour of Slovakia. Perhaps one of the best-known veggie comfort dishes is výpražaný sýr, or fried cheese. Exactly what it sounds like, fried cheese is the Central European answer to the hamburger or other types of fast food and it just so happens to be veggie-friendly. Usually accompanied by French fries or boiled potatoes and tartar sauce (the regional equivalent to ketchup or mayonnaise for all of you fry connoisseurs out there), this dish has the added bonus of reminding any local you happen to be dining with of their childhoods and/or student days at uni. Now, I’m not going to argue that this won’t clog your arteries when eaten in large quantities. But I will say that this dish is fried perfection and happens to go perfectly with a cold, local lager. Live a little and try it once — I promise, it’s worth it. Just don’t tell your nutritionist.

When in doubt, just order the cheese | Photo by by Alexandra Siebenthal

If you’re concerned about all that artery clogging, then Bratislava has vegetarians covered in the non-fried department as well. Remember that awesome farmers’ cheese I mentioned? Well, it’s delicious with beer (and anything, really) and can be enjoyed all mixed up in a tasty spread. By the end of your trip, bryndza will be your new favourite addition to all dishes, but honestly, it’s even great done up simply and spread on some hearty Slovak bread. When it’s ordered in conjunction with its cheesy cousin, marinated Camembert (done in oil with some awesome spices and generally a bit of garlic for health), you’ll think you’ve died and gone to cheese heaven, which, in my mind begs the question, is there any other kind? These treats are just the things you want lining your stomach when you know you’ve got a long evening in good company (and with good beers) ahead of you. They say an apple a day keeps the doctor away, but in my humble opinion, a good cheese dish a day keeps the hangover at bay! 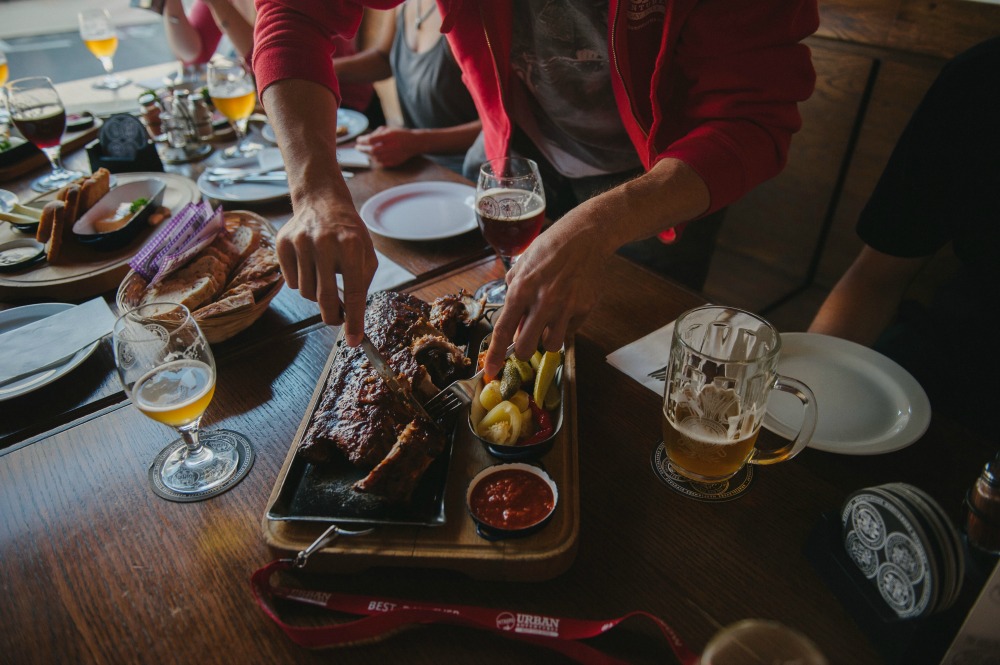 Speaking of food that goes with beer, is it really any surprise that Bratislava has some great beer-y eats as well? Surrounded by cultures that love their lagers, Slovakia’s comfort-heavy cuisine is the perfect thing to go with a pint… or five. What’s even better, though, is that there’s also a series of culinary goodies consumed with the express purpose of going well with the beer you’re drinking. I had a chance to sample a ton of these bad boys while tagging along on the Bratislava Beer Tour (10/10, would recommend) and was subsequently very, very full while simultaneously in beer-food nirvana. One of the highlights for me was the slow-cooked ribs. When done right and paired with the right sauce, these puppies are fall-off-the-bone tender and so good, you won’t mind having the sauce all over your fingers (or, if you’re like me, your mouth, arms, and in some crazed feat of gravity defiance, forehead). I’ll go so far as to say that even Emily Post won’t be able to find fault with your manners —they’re that good.

Not feeling any of the dishes I’ve mentioned? Luckily, Bratislava is a city of contrasts and culture, meaning that there’s an abundance of great food in the vicinity. After spending some time there chilling with Marek and Lukas, I’ve got a few suggestions and ideas for other appetite-whetting locales in the little-big city. First off, if you go full Gilmore Girl for a cup of joe, then any of the Urban spaces (Café, Urban Space, Bistro…etc.) locations are perfect for you. With fantastic coffees and great lemonades, tasty and modern food, and an attached bookstore/design haven, any of these locations will make your day whether you identify more as a Lorelai or a Rory.

Fresh fish, straight from the Danube | Photo by Alexandra Siebenthal

For those not feeling the heavy meat dishes, might I suggest some fresh fish? Located on the Danube, Bratislava and its surrounding areas are the perfect spots to try some freshwater delicacies. While Slovak fish is fantastic, one travel tip is to take advantage of the region’s varied history. Split between Hungarian, Austrian, and Easter European cultural influences, Bratislava’s got some great eats to go along with its diverse history. If you really want to try something cool and close, it may be worth it to take a quick skip over the super-close border and taste-test some Hungarian fishermen’s favorites! 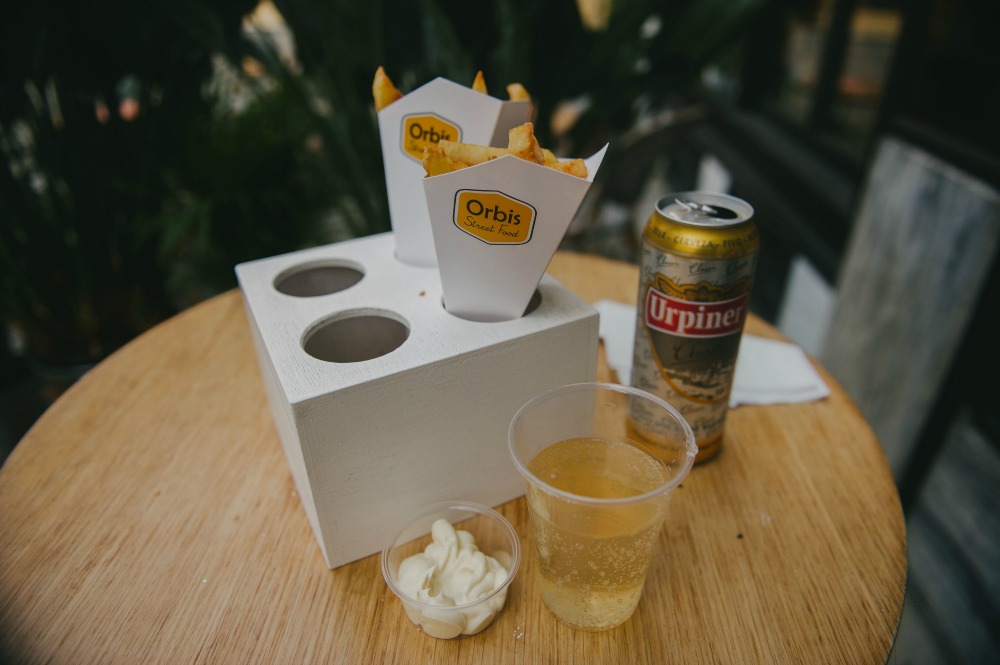 Get the fries at Orbis, you won’t regret it | Photo by Alexandra Siebenthal

If you’re looking for a more modern take on food in the city, there’s no better place to stop than Orbis Street Food in the centre of town. With a menu that specialises in street eats from all around the world, there’s truly something for everyone on this ever-changing menu. Want a pro tip? Whatever else you order, splurge on the Belgian-style fries. I’m still having dreams about these golden bits of spuds-y perfection!

To find Koun, just look for the long line | Photo by Alexandra Siebenthal

And what would a great day of new food be without a great dessert to go along with it? If you’re worried about fitting in more food, then let me share an age-old family proverb: there’s always room for ice cream because it fills in all of the nooks and crannies. Following that sterling logic, there’s only one place to head, and that’s to Koun. Situated in a little passage in the midst of Bratislava’s historical city centre, Koun (pronounced like cone, cleverly) can be found by looking for the line winding out the door. But don’t panic — the queue moves faster than you think. (That being said, budget at least 15 minutes for getting your very own koun on a sunny day.) Serving up some awesome, fresh gelato, this place embodies summer and happiness and all of that screaming for joy that tends to happen along with ice cream.

So go forth, eat, savour the flavours, and be comfy. Bratislava’s culinary scene is waiting for you.