Blog > The Ultimate Guide to Being Vegan in Melbourne 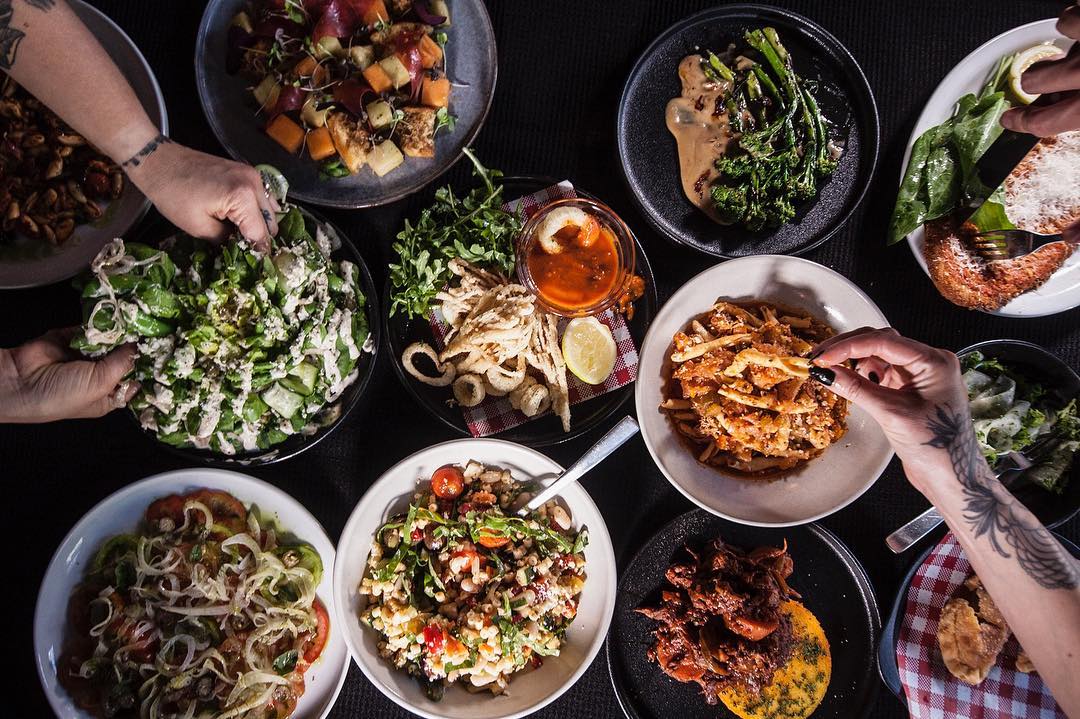 The Ultimate Guide to Being Vegan in Melbourne

Travelling as a vegan can be a daunting game of ungarnished salads and lacklustre lentil patties, but not in Melbourne, where our love of fresh produce, multiculturalism and an endless array of dining options extends to an embrace of fun vegan options and sustainable practices. Whether you’re going vegan to save the animals, save the planet, or even just exploring ways to limit your intake as a meat eater and experiment with new flavours, Australia’s most progressive city has you covered.

Vegan Food in the City Centre 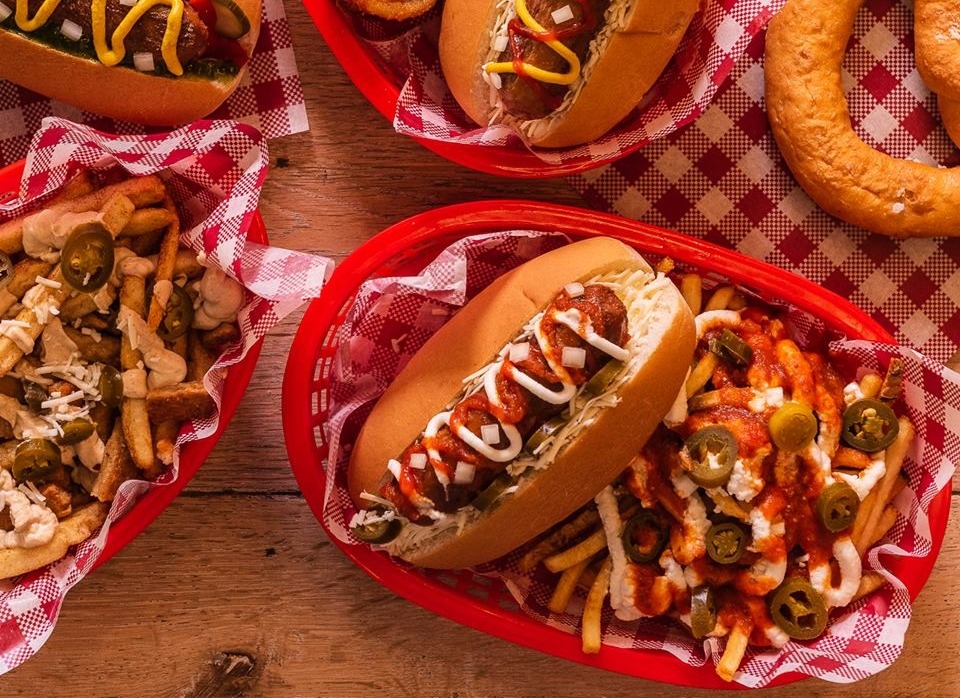 If you’re coming to Melbourne for the first time, you’ll probably find yourself hungrily making your way from the Airport to the Southern Cross Station skybus terminal, eyes darting around for something more enthralling than reading the fine print ingredients of local potato chip brands in a vending machine. Like all the best things in Melbourne, you’ll find all you need hiding in plain site.

On the councourse of the station, an unnassuming fast food joint called Lord Of The Fries serves local commuters burgers and fries. Look a bit closer at the menu and you’ll realise, hidden behind “Chick’n” “Beef” and “Phish” burgers is a 100% vegan menu! With over 15 locations across the city, the franchise, started in Melbourne in 2004, is a pefect example of the ways Melbournians have embraced vegan into the everyday fabric of our city. Try the Fakin’ bacon BLT for breakfast, or end a night out in Melbourne like a local at 4-5am (we party late) with a nugget+ fries munch box.

Make your way into the heart of the city and the vegan credentials get even better. The Causeway (a laneway between Bourke and Lt Collins St) has become a vegan hub, with Melbourne institution Crossways offering an all you can eat buffet of South Asian inspired dishes for $8.95 AUD. Futher down the lane, keep your eyes peeled for Union Kiosk, a typically tiny Melbourne cafe with an all vegan menu and twists on the classic Australian jaffle (toasted sandwich). Try the ‘pulled jackfruit and japaleno’ or stick with a classic cheese and tomato to go alongside your almond-milk flat white. Keep walking up stairs and looking down laneways in the city and you’ll be spoilt for choice.

Gon De Lin: A non-descript lift up to level 1 will take you into an all vegan restaraunt where it’s not uncommon to be eating mock-meat sweet and sour pork and spring onion pancakes with hipsters on one side and Buddhist monks on the other. Pro-tip: the lift keeps going up to one of the Urban Adventure teams’ favourite rooftop bars, Goldilocks, where you can order food from below to be eaten at the bar.

Jungle Juice: While not strictly vegan, like many Melbourne cafes, Jungle Juice has embraced vegan options. Order a Vegan Crunch bagel (corn chips and siracha in a bagel!) and Qishr (Yemenese espresso with ginger) and feel right at home with your non-vegan friends. 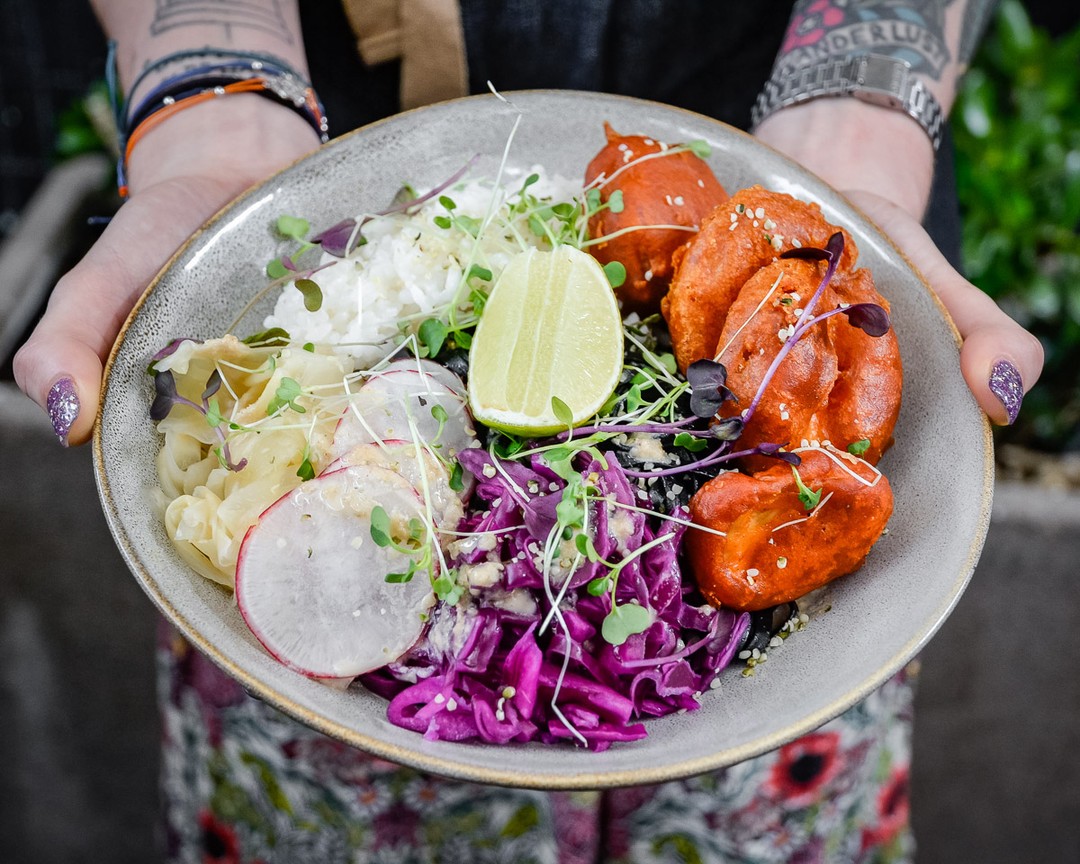 If you think Melbourne’s city centre is vegan paradise, you’ll be blown away in Fitzroy, Melbourne’s oldest and most hipster suburb. Amongst the heritage terrace houses and street art murals, Fitzroy has some of the world’s best vegan food around every corner.

Vegie Bar: This was one of the first kids on the block serving up generous plates of pasta, burgers, nachos and pizza to hungry vegetarians for over 25 years. If you can’t find a spot in the always busy restaurant, console yourself next door at their new sister store Girls & Boys over a tub of plant-based ice cream or a vegan smoothie.

Madame K: This spot is home to a fresh all vegetarian Malay-Thai menu, while a little further down you’ll find Afghan Gallery, which easily incorporates vegan options into it’s beautiful Afghan menu.

Smith and Daughters: Recently voted the 3rd best vegan restaurant in the world, one bite of Shannon Martinez’s cooking will convince you why. The casual evening restaurant with a vegan take on Spanish and Italian dishes is a must do while you’re in Melbourne, especially if the vegan prawn paella is back on the menu. Any meat eating friends you drag along might just leave converted, as head chef Shannon is herself still not vegetarian, so really pushes the menu to be as close to the taste of real meat as possible.

Smith and Deli: Close to Smith and Daughters, this companion spot serves mouth watering vegan takes on american deli bagels and sandwiches, as well as products to bring home alongside a copy of the Smith and Deli Cookbook so you can explore it’s secrets back in your own kitchen. Grab a ‘tuna’ sandwich and vegan doughnut to enjoy on the steps of the Fitzroy Town Hall as hipsters with designer dogs ride past. 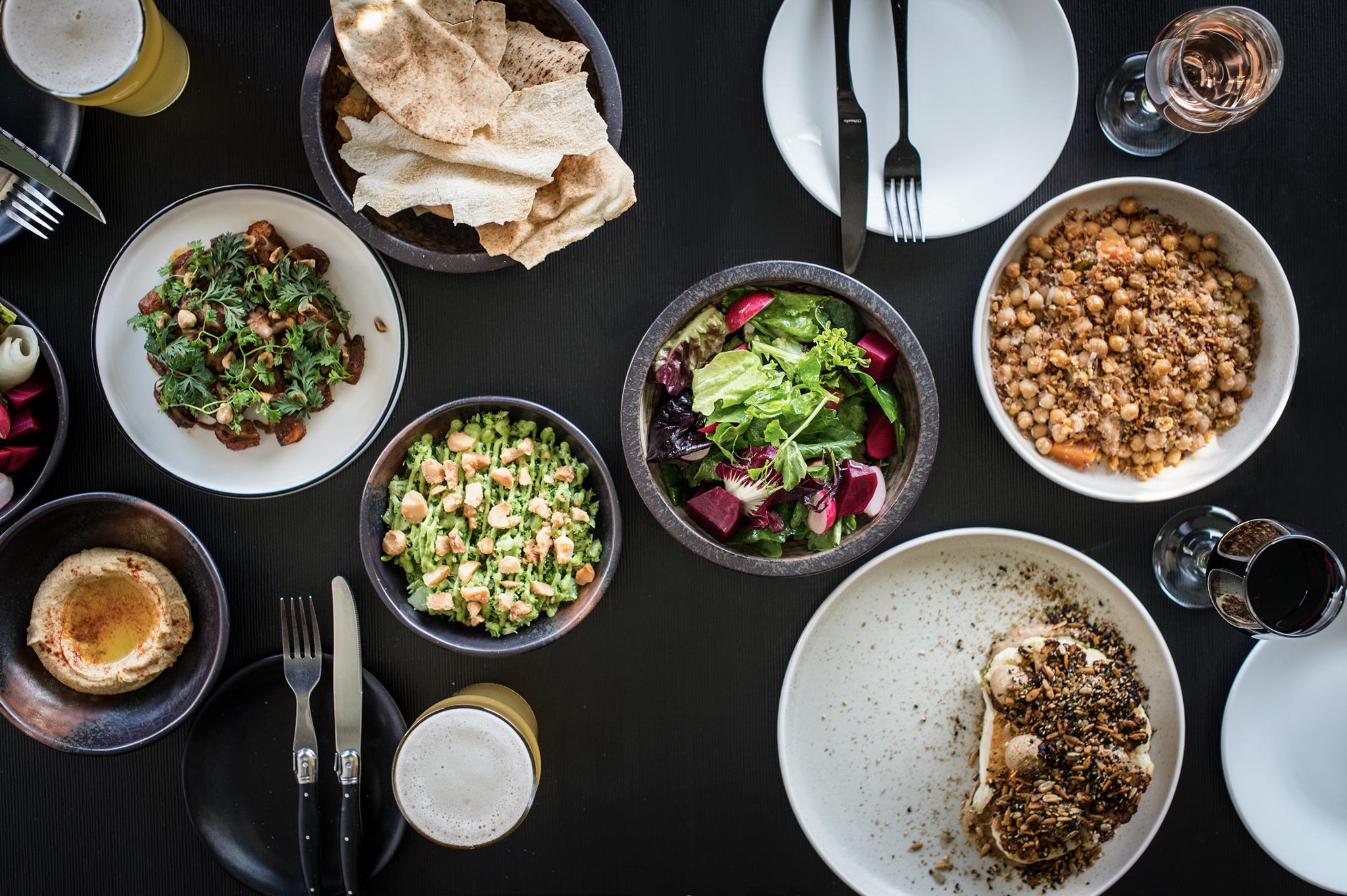 Even pub food can be vegan in Melbourne | Photo credit: Green Man's Arms

By now you’ve had a full day or more of vegan treats and shopping, and are starting to feel like a true local Melbournian, so what better way to be a local than to retire to a neighbourhood pub. Long gone are the days when the classic Aussie pub menu consisted of little more than beef pies and surf and steak plates, as many of Melbourne’s best pubs serve up something for everyone.

Green Man’s Arms: A great pub to sit and watch the world over a pint of beer and house made falafels. This Carlton corner pub was recently transformed with cosy vintage decor, a warm fireplace, a great craft beer tap selection, and an Israeli inspired vegetarian menu.

Yarra Hotel: An old world Abbotsford pub with dog friendly beer garden, footy on the TV, and vegan options for everything on the menu.

Cornish Arms Hotel: This is where it all started for many former meat-eaters. This Brunswick watering hole with an entire vegan menu serves up all the classic aussie pub meals with a mock-meat twist. Put the ‘Chicken’ Parma or ‘Fish’ and Chips in front of a meat eating mate and they’ll be easily fooled.

The Tote: The vegan food at the tote is a lot like the iconic venue itself: greasy, DIY, loud, and open well into the morning. Try the vegan gravy and chips once you’re done moshing in the band room downstairs. 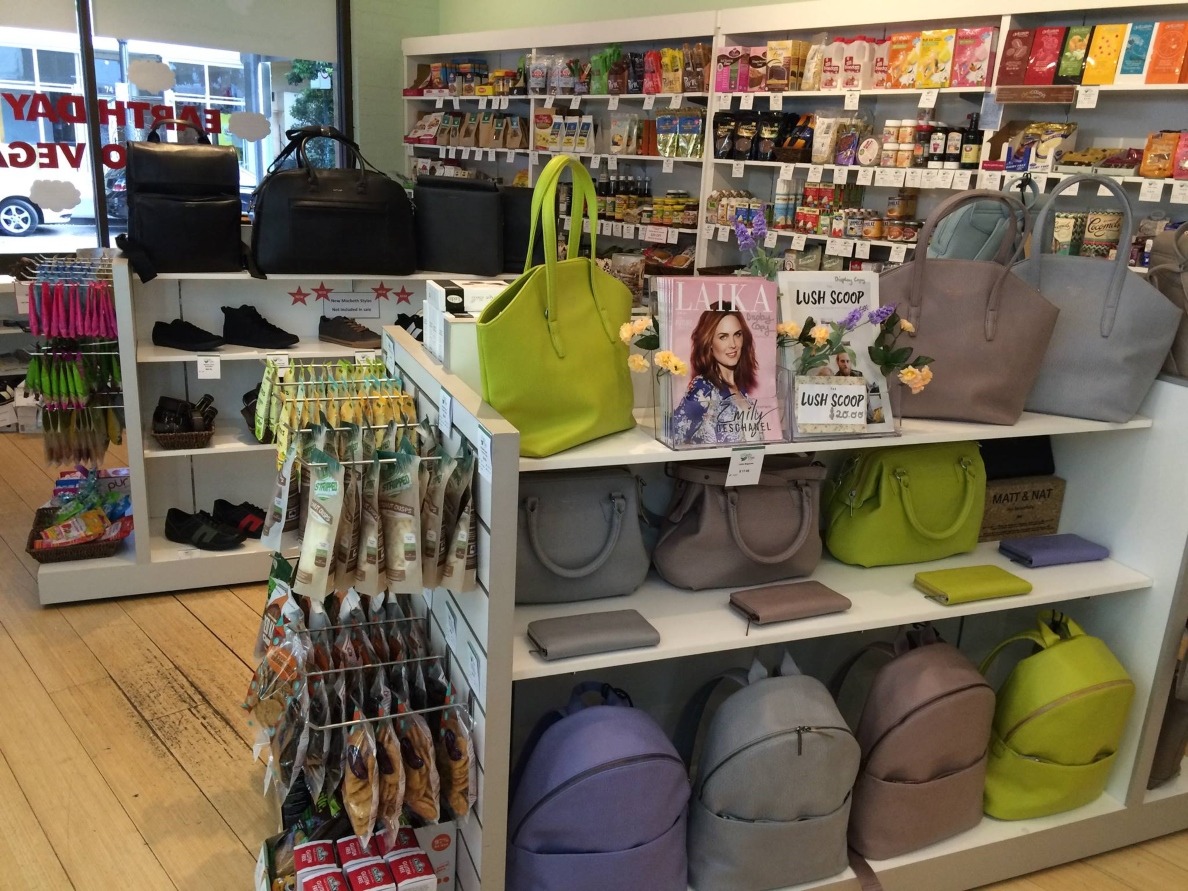 When The Cruelty Free Shop (124 Johnston Street) opened in 2017 in Fitzroy, it was said to be the world’s biggest vegan shop, and it’s easy to see why with a massive selection of vegan foods, homeware, gifts, and ethical health and beauty products.

Vegan Style (345 Brunswick Street) is where to go for a new pair of shoes, all vegan and cruelty-free. They offer stylish footwear for men, women, and kids, as well as handbags.

Booking an Urban Adventure in Melbourne and looking for a vegan twist? Our Bites and Sites tour often visits Jungle Juice or Union Kiosk, and all our tours can be made vegan friendly with a word to our #localsknow guides.