Blog > Berlin: Exposed and off the beaten path 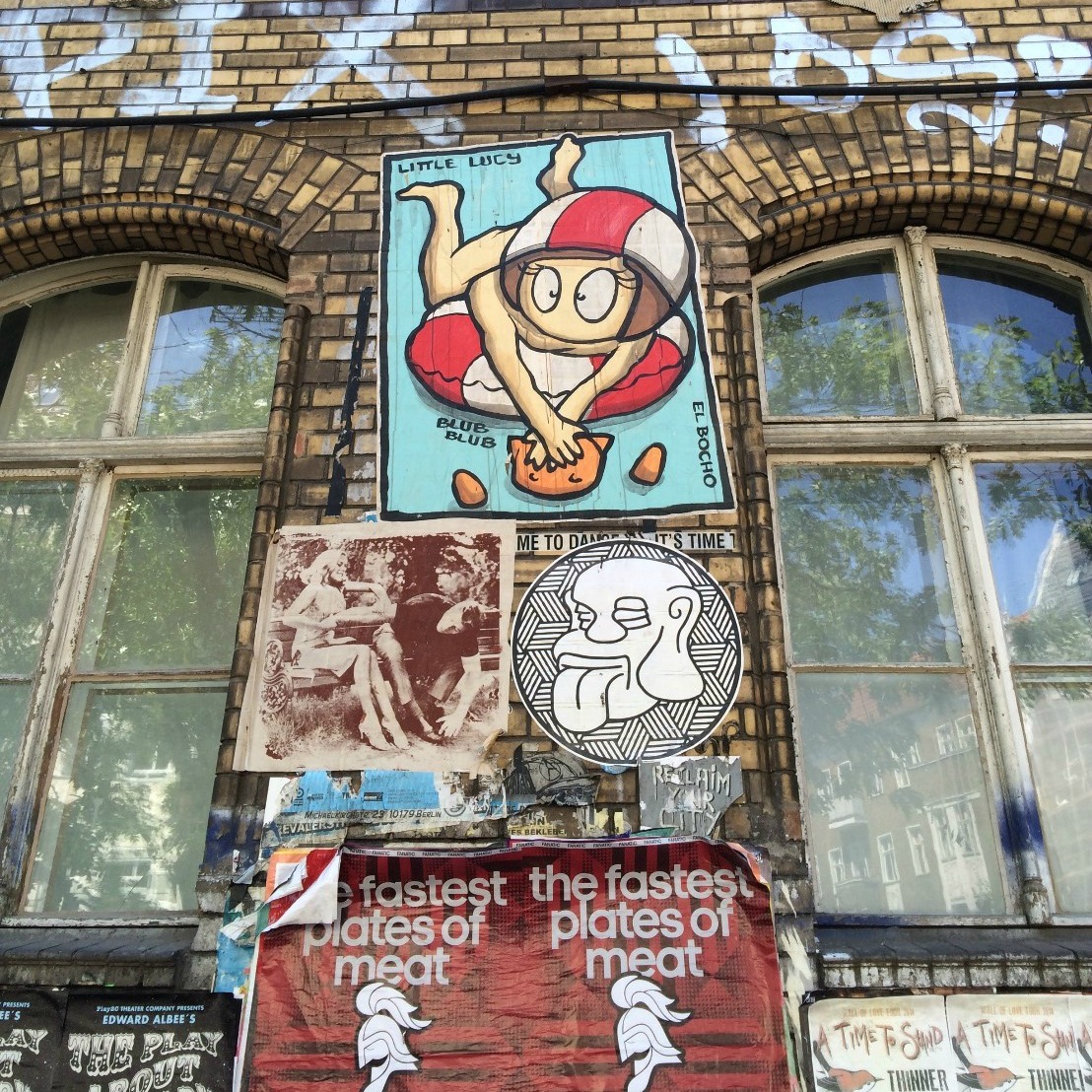 Berlin: Exposed and off the beaten path

Cities aren’t just places, they’re characters — so who is Berlin? I’d say the city is a gender-neutral individual with a dark past, clad in leather and piercings. This character is a little rough around the edges, but after you’ve watched some football over one too many beers with him/her, you’re likely to fall in love with Berlin’s sparkle that sits just below the graffiti’d surface. Constantly evolving yet rooted in history, Berlin is an ongoing project but it’s also one of my favourite cities because it is anything but typical. It is a city wrapped in paradoxes; an enigma that is waiting to be discovered.

I am a student of history and, therefore, my first exposure to Berlin came from textbooks. But understanding Berlin’s present and future is to understand its past. Several major events of the 20th century happened in Berlin, giving this city a unique (and sometimes difficult) place in the world. Each event in the city’s history reflects the push-and-pull atmosphere that exists in Berlin today, whether that be from the paradoxical leader of Germany’s past, Fredrick the Great, or the juxtaposition of East and West Berlin. Berlin is a city constantly balancing tradition with free-thought, especially since a dramatic counterculture developed after the end of Soviet rule. The late David Bowie described Berlin as “the greatest cultural extravaganza that one could imagine.” 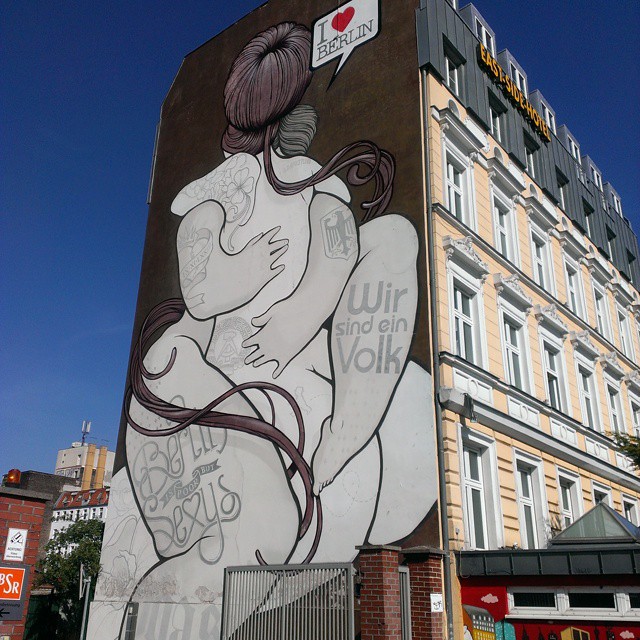 I know this isn’t a history lecture, but learning a little about Berlin’s past will only help to better understand its modern culture. Under the enlightened rule of Fredrick the Great, Berlin became a city of opposing forces led by Prussian tradition and a progressive culture. Later, as the 19th century wore on, rapid industrialisation and the unrelenting wave of modernity hurled Berlin into the future. Having surpassed the rest of Europe, Berlin became a city of movement, of traffic, and of modern anxiety, and became known as an “electropolis.” The unstoppable train of modernity created the perfect breeding ground for the Expressionist Movement that highlighted the dark realities of urban life that came to fruition after World War I. Then came the extravagant era of the 1920s in Berlin, run under the Weimer Republic. The city played host to a lost generation of societal rejects making the city unapologetically “weird,” which is a culture that has remained in Berlin to this day — especially after the end of the Cold War. But in 1933, Hitler and the Nazi Party came to power, forever changing history. The city became a hub of Nazi architecture, with imposing buildings and architectural tricks designed to leave you feeling intimidated. After the war, Berlin was left in ruins and divided into sections under the jurisdiction of the allied victors; the city was divided into East and West.

The eyes of the world would remain on Berlin throughout the Cold War and a wall would be built in the 1960s, further polarising the city. Fast-forward a few decades and Berlin finds itself still divided, leaving generations of Berliners separated from each other. In 1989, the Berlin Wall finally fell, reuniting the city with its other half and creating an opportunity for a dramatic counterculture to develop without the oppression of Soviet rule. Abandoned buildings left behind from the Soviet era became the new home for squatters, and artists continued to express themselves on the canvases available to them on the street. After 1989, Berlin became a hardcore place where graffiti and techno music pulsed throughout the neighbourhoods, especially in areas like bohemian Kreuzberg. Now, capitalists and real estate developers are threatening the presence of this counterculture, calling for gentrification. Contemporary Berlin is now viewed as a bastion of counterculture dealing with 21st century realities such as a real estate boom and the rule of capitalism. As a result, you, fearless traveller, must go on a bit of an expedition to find the hidden creative spaces!

So, what is authentic Berlin, one that goes beyond the Reichstag and the Brandenburg Gate? I was happy to experience a taste of the real Berlin during my stop there; a taste that was washed down with beer and a new-found love for street art. Here is my list of tips that will expose Berlin to the average visitor, a brief insider’s guide to discovering a city that oftentimes appears unapproachable.

Order a burger at Burgermeister 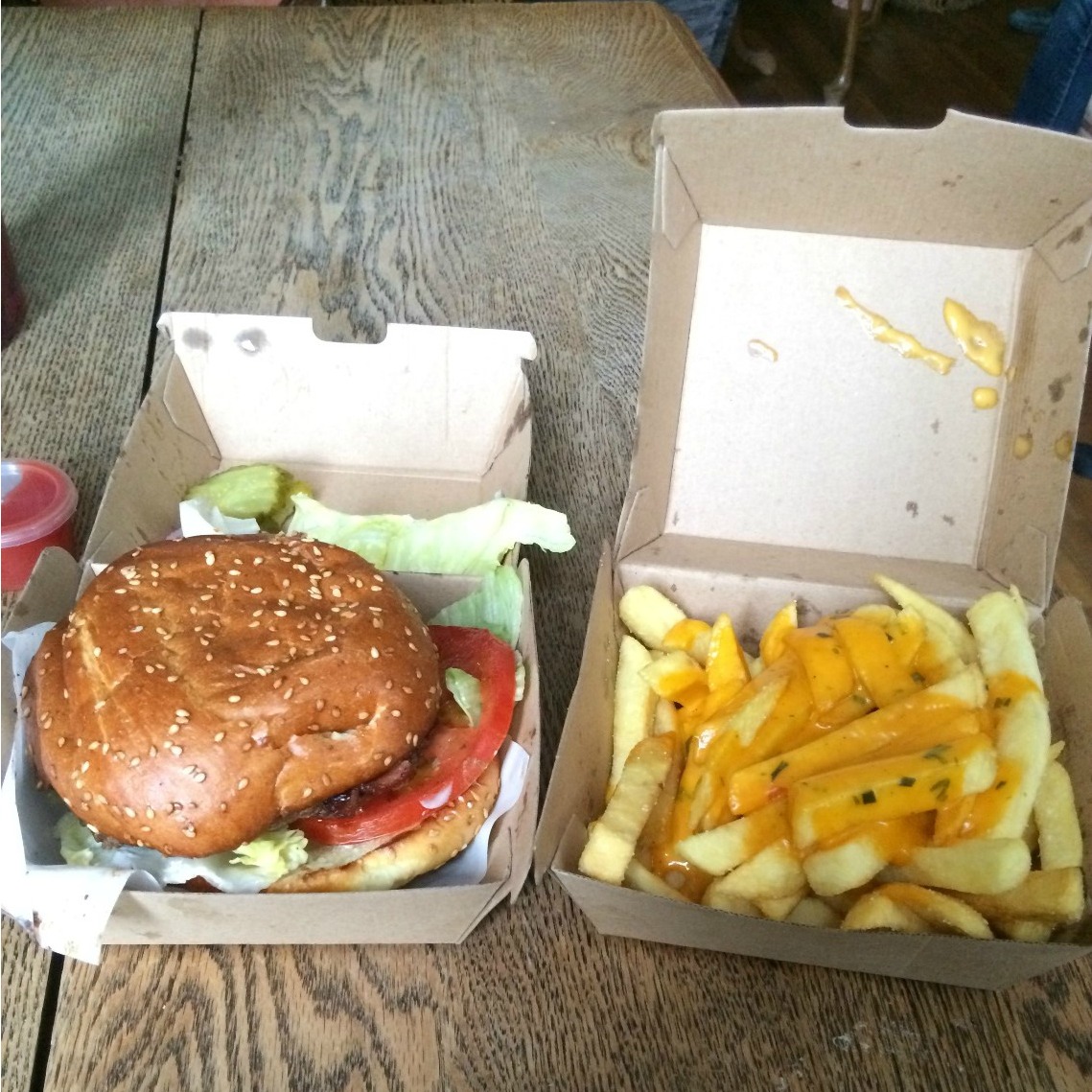 For the best burger in Berlin, try Burgermeister. | Photo by Chelsey Crabbe

Get in touch with your edgier (and hungrier) side and grab a burger at Burgermeister in Berlin’s bohemian neighbourhood of Kreuzberg. Trust me, the line-up is worth it! Formerly a public restroom and located under a set of U-Bahn tracks, this fast food stop is great for people-watching and cheese fries. Revered by locals and curious outsiders alike, Burgermeister is an informal way of being a part of Kreuzberg’s alternative lifestyle while keeping your wallet as satisfied as your stomach.

Test your limits on two wheels

What’s more frightening than riding a bike through a fast-paced cultural hub like Berlin? Literally nothing, which I came to find out after my own attempt to bike around. But if you can conquer Berlin by bike, then the city will seem a lot less intimidating after having biked its streets. I recommend riding to Tempelhofer Park. Formerly an airport tarmac where the Berlin Airlift took place, this hidden secret exemplifies Berlin’s ability to transform and evolve despite the dark moments in its history. It’s a thrilling experience to glide down the tarmac on a bike knowing that planes had done the same decades before you.

Head back to Kreuzberg to experience some of Berlin’s diverse cultural influences by stopping at the neighbourhood’s daunting Turkish market. When I visited the market, I was in awe of all the vibrant smells, colours, and individuals; the stands seemed to stretch for miles, and after navigating through the throngs of market-goers, I found myself purchasing a large to-go cup of freshly squeezed juice. Since it was a hundred degrees in Berlin that day, I found the market and its array of cold beverages to be a mirage in the desert of stifling concrete and asphalt. The market is a great place to try street food and observe local Berliners buying their weekly produce. Although there is much to see in Kreuzberg, the Turkish market remains at the top of my list of things to do in this neighbourhood.

Get in touch with your artistic side

Go out and make your own street art tour! Much of Berlin’s counterculture was displayed through art that developed as a result of Soviet rule and continued decades after the falling of the Berlin Wall in 1989. Wander the East Side Gallery to view some of the city’s most famous works like Leonid Brezhnev and Erich Honecker embracing in a kiss, or walk around Kreuzberg and try to find the Cosmonaut mural, which happens to be my favourite example of street art in Berlin. Or follow a particular artist like El Bocho and his character, “Little Lucy,” around the city as a way of appreciating this unconventional aspect of Berlin that balances the presence of imposing Soviet architecture.

Berlin’s commendable way of dealing with its past is evident in the powerful and simplistic monuments dedicated to historical events that plagued and shaped the city’s history. My favourite memorial in Berlin is one that could easily be overlooked by the average tourist or even Berliner. While strolling through Bebelplatz, keep an eye out for a glass plate set into the cobblestones revealing an entirely white set of empty bookcases with a plaque reading: “That was only a prelude; where they burn books, they will in the end also burn people.” During the spring of 1933, one of the infamous Nazi book burnings occurred in the square of Bebelplatz. The subtle memorial commemorates the burning of almost 20,000 books that represented opposing ideologies to Nazism. The memorial in Bebelplatz is transformative and moving, a definite reminder of the city’s past and its difficult task of remembering these events. Other monuments and memorials to check out include the Memorial to the Murdered Jews in Europe and the traffic light replica at Potsdamer Platz. 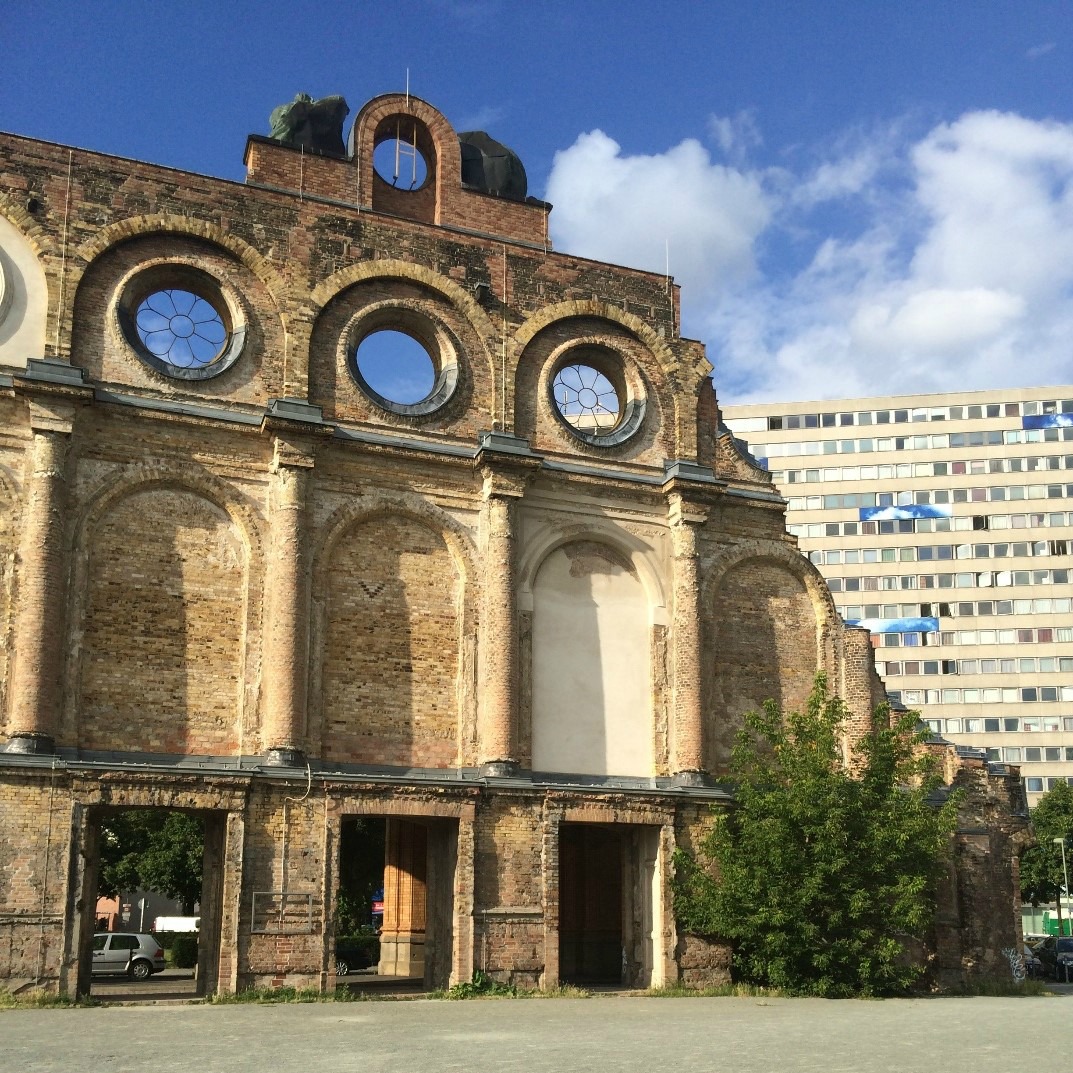 Exploring the relics of bygone Berlin. | Photo by Chelsey Crabbe

The Cold War is over and Berlin is no longer divided between East and West, but abandoned relics from this bygone era can still be found all over Berlin and its surrounding suburbs. Take some time to explore these urban skeletons representative of a past era. Although these areas are quite haunting, they exert a certain element of beauty. Some abandoned locations were revamped into techno clubs like Berghain or became homes for the squatter population after the Cold War ended in 1989. Still, there are untouched gems that have yet to be revamped such as Spreepark, a decaying amusement park, or the 1936 Olympic Village.

Stroll along the Spree River

Like the Seine or the River Thames, the Spree River runs through the heart of Berlin, opening up the city to a plethora of riverside activities and bars. Since the nearest beach is hundreds of kilometres away, the local Berliners have gotten creative and built various beach bars along the River Spree. By day, these hubs are casual beaches, but by night, DJs spin electronic tracks iconic to Berlin as beachgoers dance the night away on the banks of the river. Some of the most notable beach bars include Badeschiff and Strandbar Mitte. The former is a floating barge turned swimming pool, reminiscent of traditional open-air baths. If you’re in town during the bathing months, grab your swimsuit and head down to the river to mingle with the local crowd. 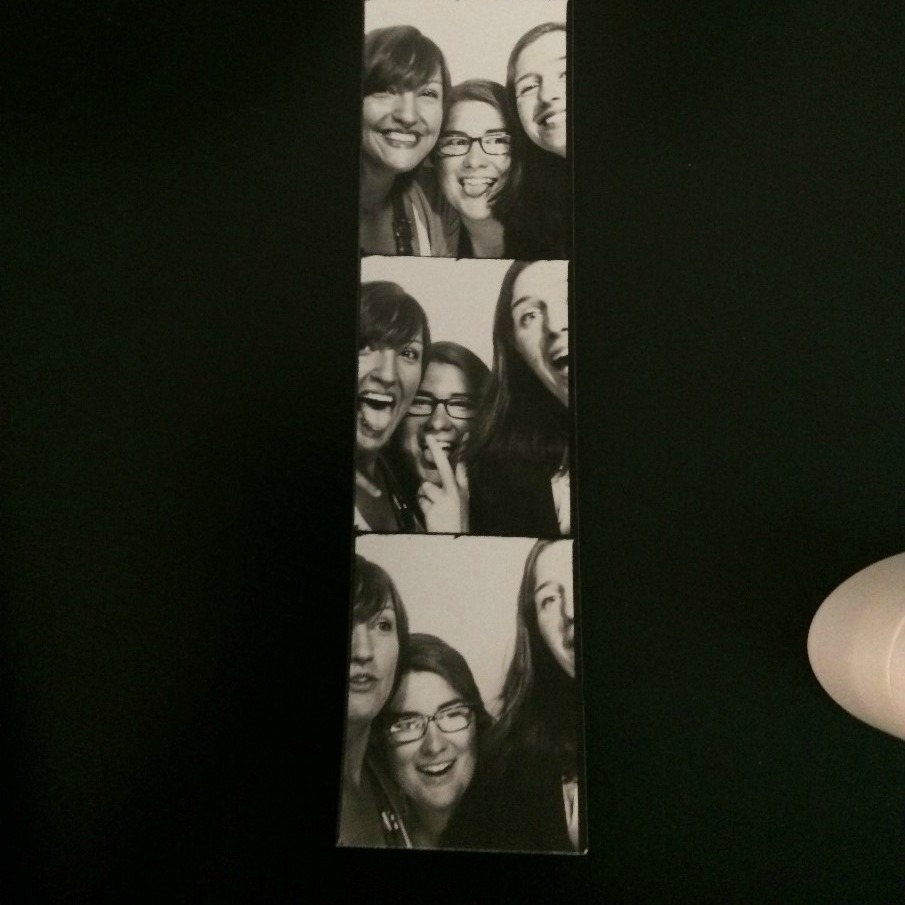 What better way to document your time in Berlin than an old-fashioned photo booth series of photographs? All around the city are old-fashioned photoautomat booths, and they’re easy to find even if you do end up having one too many beers. In an increasingly paperless world, these vintage selfies are making a comeback around Europe and are wonderful souvenirs. I can remember when and where I took my souvenir photos. During my first night out in the city, my friends and I were discovering Berlin by night, listening to street performers, watching the late summer sun set over the Spree, and taking advantage of the capital’s open-container laws. We saw one of these old-time booths on a bridge and hopped in. These photos perfectly encapsulated the moments of pure fun that I was having on this night. To this day, those photographs are some of my most valuable souvenirs. So pull back the curtain, pay a few euros, and say cheese!