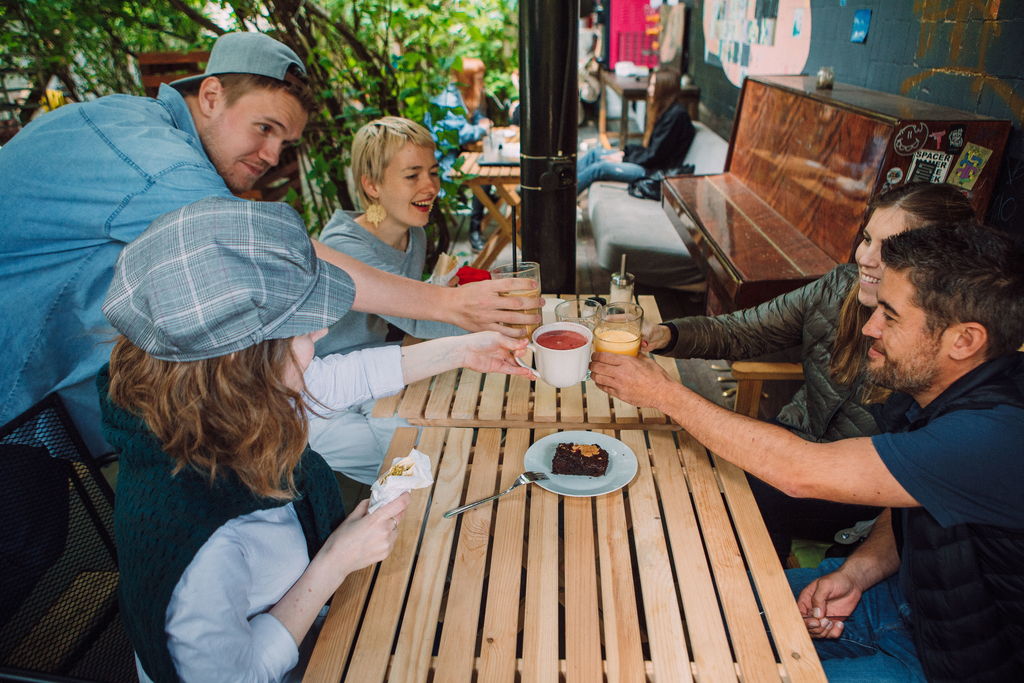 Ever been to a cafe where you didn’t have to pay for tea or coffee, but instead for the time you spent there? If not, Moscow is the best place to discover this new trend of the “anti-cafe.” And if you have experienced this new trend, then Moscow has some interesting takes on it that may surprise even the most experienced anti-cafe-goer.

“I loved it because it’s full or young people, there are no tourists, you are free to do whatever you want, like eating cakes or tea. And it’s cheap after all.” – Nathaniel, France.

An anti-cafe is a place that offers you unlimited coffee, tea and sweets, while charging only for the time you spend there. You can think of it as an alternative social space. It’s close to a co-working space, but the main difference is that people come here not only to work, but also to relax. The important ingredient in an anti-cafe is that it’s a modern and well-designed place.

People go to anti-cafes to work or to study, to play table games, to make new friends or simply to use the wi-fi while enjoying a cup of coffee. Moreover, anti-cafes offer a variety of activities such as film screening, lectures, dance classes and language classes. Most anti-cafes prohibit the consumption of alcohol.

The average price in Moscow goes from 2 rubles (or 2 cents) per minute and usually costs about 500 rubles for a day (around USD 8). You don’t pay for more than a maximum of four to five hours, once you’ve reached the maxiumum daily price.

Tsiferblat (Clockface) was the first anti-cafe I visited. Back to 2011, I was the type of student who was eager to discover new, trendy places. What impressed me was the friendly atmosphere and vintage style. For me, it still stays as the one and only. I mostly go to anti-cafes for concerts. I adore live music but sometimes it’s not easy to find a cosy place to listen to it in Moscow. Often it turns out that an anti-cafe is the best choice.

Nowadays, you can hardly surprise anyone with this type of cafe, but back to 2010 no one had heard of such a place. It all started in Moscow when  Russian journalist and writer Ivan Mitin opened a placed called House of the Tree. It was meant to be for artistic people to pay what they can. The place became very popular, so there was a decision to open a new one. But this time Ivan suggested a scheme in which guests would pay for their time. That’s how in 2011 the first anti-cafe, Tsiferblat, was created (although the term itself was first used in 2012 for another popular anti-cafe, Butterflies). There are several synonyms for anti-cafes, such as time cafe, time club or free space.

The idea became so popular that just in one year about 70 different anti-cafes opened in Russia and former Soviet counties. In an interview, the founder of the first anti-cafe said, “In the Tsiferblat model many people saw an easy way to earn money. But in reality, it’s not easy to create an atmosphere that will attract people. Therefore, lots of anti-cafes are just empty and then close in a short period of time.” The concept is still expanding  in countries like France, Germany, Finland, the United States, Slovakia, Britain and the Czech Republic. Ivan Mitin opened an anti-cafe in London, but he admits that it didn’t have the same success as in Russia. So if you want to learn why Russians love this new type of cafe so much, the best way is to discover it for yourself.

Here are four anti-cafes in Moscow we recommend you visit.

Tsiferblat
One of the first anti-cafes in Moscow, Tsiferblat is known for its special atmosphere and a balcony with a unique view of Tverskaya street. This anti-cafe is also on the way to Urban Adventures’ Moscow Behind the Icons tour, so it’s a good hangout before your tour starts. Cafe is open Sunday-Thursday, noon to midnight and Friday-Saturday 11am – 7pm.
Metro: Tverskaya, Pushkinskaya. Tverskaya street, 12 (ring the doorbell and they will open!)

Wooden Door
As well as being a cafe, Wooden Door also serves food, has board games available to play, and you can smoke shisha here.
Metro: Lubyanka. Milyutinski pereulok 6

Zelenaya dver (Green Door)
There is a funky video on their site explaining how to find them from the metro station. Zelenaya dver offers board games, and also has a night tariff for those who want to hang out in the late hours. Cafe is open Sunday – Thursday 11am – 1am and on Fridays and Saturdays is open 24 hours.
Metro: Chistye Prudy. Milyutinski pereulok 19/4, Building 1

Kotiki i Lyudi (Cats and People)
No pet? No problem! Kotiki i Lyudi is a cafe that shelters and adopts cats. Come hang out with the kitties and enjoy a coffee or tea and sweets. Cafe open daily from 11am – 10pm.
Metro: Baumanskaya. 31/1 Novaya Basmannaya ul.