Blog > The owners have no restaurant experience, but this is still the best vegan cafe in Moscow 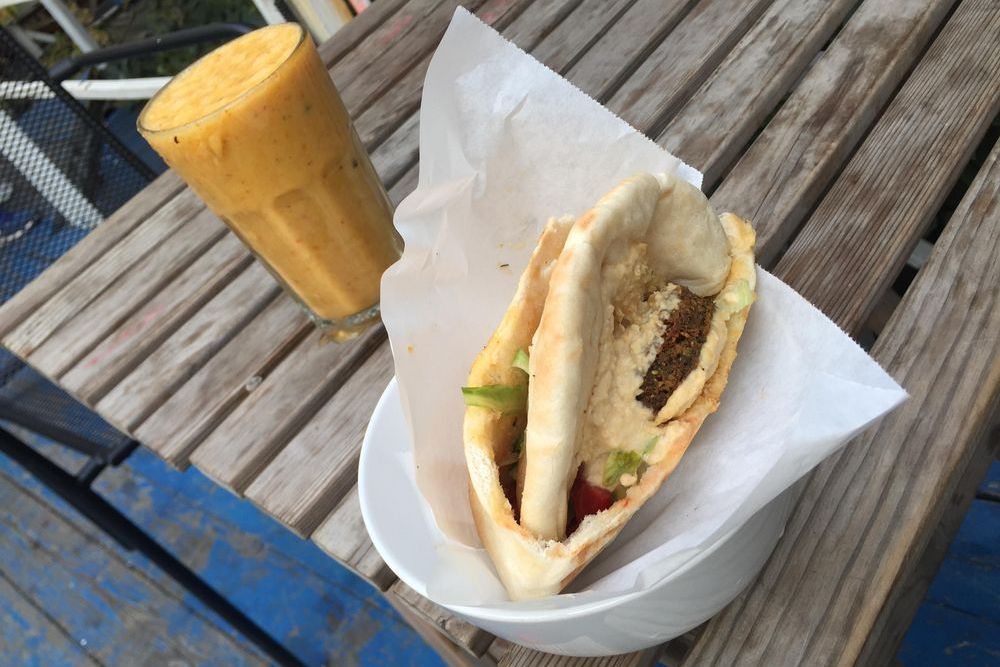 The owners have no restaurant experience, but this is still the best vegan cafe in Moscow

Wandering the maze of yards of Moscow’s Artplay Design Centre, you will sooner or later stumble upon a bullet-shaped structure mounting a concrete box covered in drawings. If you get here in one of the few warm months, you will also see a summer terrace with chairs and tables of all shapes.

This is Fruits&Veges, the best vegan restaurant in Moscow, opened by a group of enthusiasts with no previous experience in the restaurant business whatsoever; they just love good vegan food. The cafe has been around for half a decade, and after a few bumps on the road (since none of the team members knew how to cook or manage a restaurant!) now the venue seems to stand strong on its feet.

Inside, the restaurant is bigger than it seems from the outside. The space where the cafe is located used to be a bomb shelter: Artplay occupies the territory of the former Manometer plant that manufactured measuring instruments for the oil, gas and energy industries. During WWII, the plant switched to mines and arms production, so a bomb shelter made sense at the time.

Entering the concrete box is like falling down the rabbit’s hole: once you enter, there are some steps down — something like an amphitheatre with tables on every level. The ‘stage’ is the bar and the open kitchen. This sophisticated yet cosy space is a brainchild of the owner, Anton Lubny, an architect by trade.

The regulars, most of whom work in the architectural firms and fashion showrooms of Art Play, appreciate the club atmosphere and the DIY vibe. “The furniture comes from all over the place,” Anton explains, “For example, this chair is century-old IKEA, this one is from some construction store, and this one I’ve sewn myself.”

When asked why he decided to open a vegetarian cafe, Anton says: “A few years back I couldn’t get a good vegan meal in Moscow, so I decided to open a cafe. I call myself ‘cake-vegan,’ meaning I am vegan but not when it comes to desserts and baked goods.”

Continuing our tour of the restaurant, Anton explains that guests like to draw on the walls.  He points to a pattern on the wall that looks like a shadow of a branch from the sunlit window. “It looks very real, but it is actually a drawing,” he says. “There are no windows here!”

The most popular dish is the falafel | Photo by Anna Ivantsova

The menu in Fruits&Veges changes almost every day; Anton and his team get bored pretty quickly and regularly come up with new ideas. “Our most popular dish is falafel,” says Anton. “But to tell you the truth, I’ve gotten a little tired of it over the years. My current favourite is our seitan sandwich. It’s big and hearty and makes a great lunch. Although we recently had some Israeli guests who praised our falafel.”

The famous falafel comes with a choice of three sauces — tarator, salsa and sour cream with coconut and mint, in a pita or as a roll. But that is only one of the constant things on the menu. In summer you’ll probably find some courgette dishes on the menu — Muscovites are big fans of fresh courgettes. Another summer favorite are pink tomatoes. These particularly sweet juicy tomatoes from the south of Russia are only available from the market in July and August, and the cafe makes the most of the season.

Of course, you can expect international vegan favorites such as kale salad, hummus and avocado sandwiches, tofu, etc. For dessert, look for the blueberry cake — it’s fantastic! In winter, expect spicier soups and hearty hot dishes with rice and legumes. It’s always best to ask the guys behind the counter for suggestions; they know what’s good today.

And what about the enigmatic bullet structure on the roof of the bunker? Anton calls it ‘orangerie’. Sometimes it serves as a herb garden where the chefs grow thyme and basil for the kitchen, sometimes it is used for lectures and events. But normally you’ll find a bunch of musical instruments here; the cafe hosts live concerts almost every weekend.

“A few years ago I literally didn’t have a place to live, so I stayed in this orangerie,” Anton says. “My friend Misha Antonov built it for the Micro-home festival. The assignment was to create a livable space with an area of 5 to 15 square metres. After the festival was over, we brought Misha’s micro-home here, to Artplay. At some point, the management of the design centre told us to get rid of it. Instead, we put it on the roof. Took us a night, but it was saved. It actually looks great in this yard!’

Want to taste the local flavours for yourself at Fruits&Veges? We visit this shop (and other favourite local places!) on our Made In Moscow tour.