Blog > Bratislava by boat and in Samuel Hubbard shoes 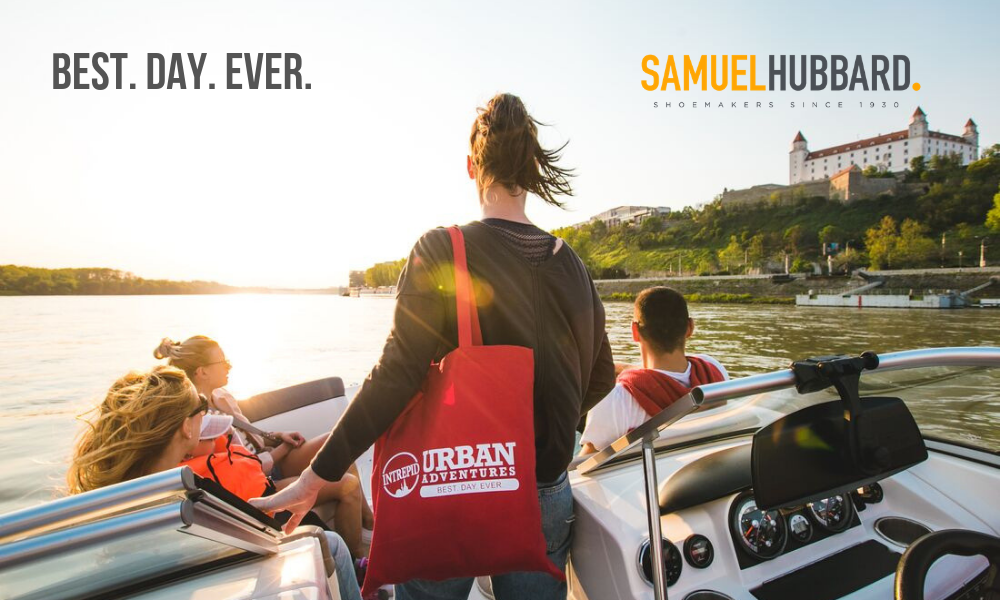 Bratislava by boat and in Samuel Hubbard shoes

There are two types of crafts in our world — watercraft and craft beer — and this Bratislavan boat cruise happens to combine both. It’s safe to say we’re in love, or geographically speaking, we’re in Slovakia.

Bratislava is the capital of Slovakia and sits on the banks of the Danube River. While Bratislava may not be as famous as neighbouring Vienna and Budapest, they’re all sharing the same river and there’s obviously something magical in the water. The city experienced a population boom in the years after WWII and now, following the fall of the Soviet Union, it has evolved into a quirky and popular travellers’ destination that is equal parts historic and beautiful.

As we all know, choosing appropriate footwear when travelling is absolutely crucial. And what could be more appropriate than Samuel Hubbard’s Tasseled Traveler and Frequent Traveler loafers? Stylish in both men’s and women’s, they’re perfect for strolling through Bratislava’s romantic Old Town and for climbing, or rather stepping, on board a boat. Not to mention they’re crafted just as exquisitely as the local brew you’ll soon enjoy.

Your departure point is the Bridge of the Slovak National Uprising, called SNP Bridge for short, which is more than just a bridge. It has a UFO-shaped restaurant on top at a cool 85 metres, which serves up both traditional Slovak cuisine and ridiculous views of the city. From here you’ll cruise towards Old Town and the Old Town Hall, which dates back to the 13th century, with a phenomenal panorama of the imposing Bratislava Castle.

The 17th-century castle was built by the Hapsburgs, a family that dominated Europe for hundreds and hundreds of years, though it was burnt to the ground in 1811 and only reconstructed in the 1960s. It’s now a national cultural monument.

Another famous sight is St Martin’s Cathedral, in which the Kings and Queens of the Hungarian Empire were crowned during the 16–19th centuries. There are underground crypts and catacombs containing archbishops and cardinals and noble families from the region.

You’ll continue along the river a little longer, admiring the architecture and mountainous backdrop. It’s quite a different perspective to what most travellers experience, and don’t be surprised if there are a few locals sharing the boat too. The boat will drop you on the other side of the river and it’s here that you can exchange craft for craft and find out if Slovakia’s beer floats your boat.

Keeping in theme, the brewery happens to be a floating boat (better than a sinking one) and you can sit back and sink some tasty brews while your guide explains the history of the Danube. Europe’s second-longest river has played a critical role in the formation of modern Europe and runs all the way from Germany’s Black Forest to the Black Sea, a grand total of 2,850 kilometres. And on a side note, in 2017 a Romanian man named Avram Iancu became the first to swim its length without a wetsuit. The journey took 89 days but it hasn’t been confirmed if he stopped at this brewery along the way.

At the end of the tour your guide will provide you with a mystery gift and no, it’s not another beer, though you’re more than welcome to hang around for a few more. Your guide will also provide some local suggestions on how to spend the rest of the afternoon.

Bratislava is fortunate in that it’s nestled in the Carpathian Mountain and the locals love nothing more than to spend a day hitting the hiking and cycling trails in the hills. Alternatively, there’s nothing wrong with just loafing around Old Town — you’re wearing loafers after all — and pulling up a seat at one of the atmospheric restaurants or bars. The city really comes alive with some unexpected yet very enjoyable nightlife, so be sure to take it easy at the brewery so you don’t miss out.