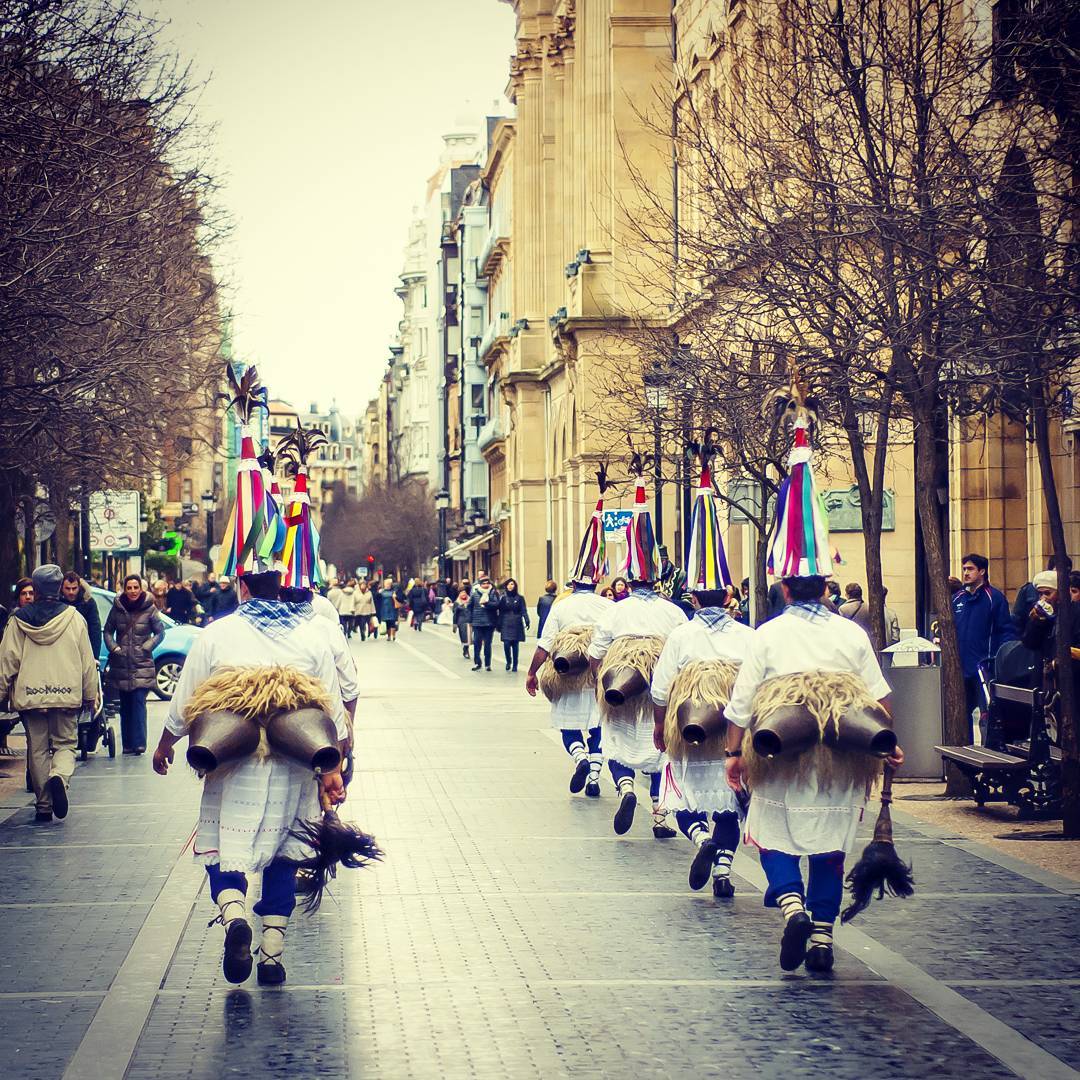 February is a joyful time in San Sebastián despite the tedious winter wind and rain. It is the month when we promote our identity and go wild with Carnival, which is widely celebrated all over the country. In the city of San Sebastián, it’s not just one, but multiple big events for celebrating, and as a foreigner in the Basque Country, you’ll no doubt be intrigued by the unusual ways we celebrate this world-wide event.

Zanpantzar is a traditional character of the Basque culture, whose job is to announce the coming of Carnival

In the Basque Country, we take Carnival season quite seriously. While the modern concept of Carnival is mostly about dressing up and shameless partying, there are some other local traditions that you’re probably less familiar with but that are totally authentic, and totally unique to this particular Carnival celebration. The Basque Carnival, and more specifically the characters in our folklore, have similarities with Slavic countries and, to a smaller degree, with other autonomous regions like Galicia — but even so, they’re probably still unlike any other Carnival celebration you’ve heard of!

In recent years, participation in what we call the “caldereros” has visibly declined, but there are still plenty of schools, neighbourhood communities, and gastronomy clubs keeping this festivity alive.

Caldereros are meant to represent gypsy tribes, travelling and selling their products to locals during Carnival. The tradition involves an old frying pan and a hammer as an instrument, while traditional melodies by Basque composer Raimundo Sarriegui are chanted in unison.

The presence of the caldereros in town means the beginning of the Carnival season. This joyful tradition, more than a century old, is typically celebrated on the first Saturday of February or the Saturday prior to Candelaria Day. A few days later, these kind gypsies arrive in San Sebastián to fill the streets of Old Town with their cheerful performances.

The traditional dances of Inudeak eta artzainak represent the courtships that happened between shepherds and wet nurses whenever the shepherds came to town. (In some towns, the genders are reversed.) In addition to the two main characters in the dances, there are plenty of other performers that complete the canvas, with the assistance of tens of drummers.

Inudeak eta artzaiak is celebrated the Sunday after Caldereros Day, and it is very common to run into a parade of schoolchildren or Basque traditional dancers performing the routines or, in the case of San Sebastián, the steps of Raimundo Sarriegui’s melodies.

The biggest Carnival event brings 24 companies to dance around the city centre of San Sebastián. In late February, local dance troupes have the chance to win the most prestigious prizes, but only if they are worthy, of course. The prizes are mostly symbolic, but only the best carriages, Carnival themes, or choreographies will get such recognition.

Of course, what makes the San Sebastián parade exciting is not the reward but rather the journey. Companies from the San Sebastián area bring hours of catchy music and glee after rehearsing for months to make the parade flawless. (Be sure to follow us on social media to know the latest news about the coming carnival parade!)

The Burial of the Sardine

What sounds like a gloomy tradition is actually a humorous way of giving closure to yet another crazy Carnival season. During the Burial of the Sardine, locals dress for mourning and join a satiric parade in character as devils, widows, and widowers.

Fake tears and a funeral march are the focal points of this ironic parade, where the characters typically advance towards the river and throw a huge handmade sardine into the water. This metaphor implies the end of Carnival, which is as sad as death. In San Sebastián, the sardine will be set on fire instead of thrown to the waves.

So if you happen to be around San Sebastián at this time of year, we recommend visiting the tourist information office to get the full Carnival itinerary. And don’t forget to pack your costumes so you can join the celebrations!

Discover the oh-so-local way of life in Basque country on a San Sebastian tour, with a local guide. With our tours you can take to the hills and discover the gorgeous coastline of the St. James Way, or get to know Basque food by tucking into some delicious pintxos. When it comes to San Sebastian travel, we’ve got you covered!