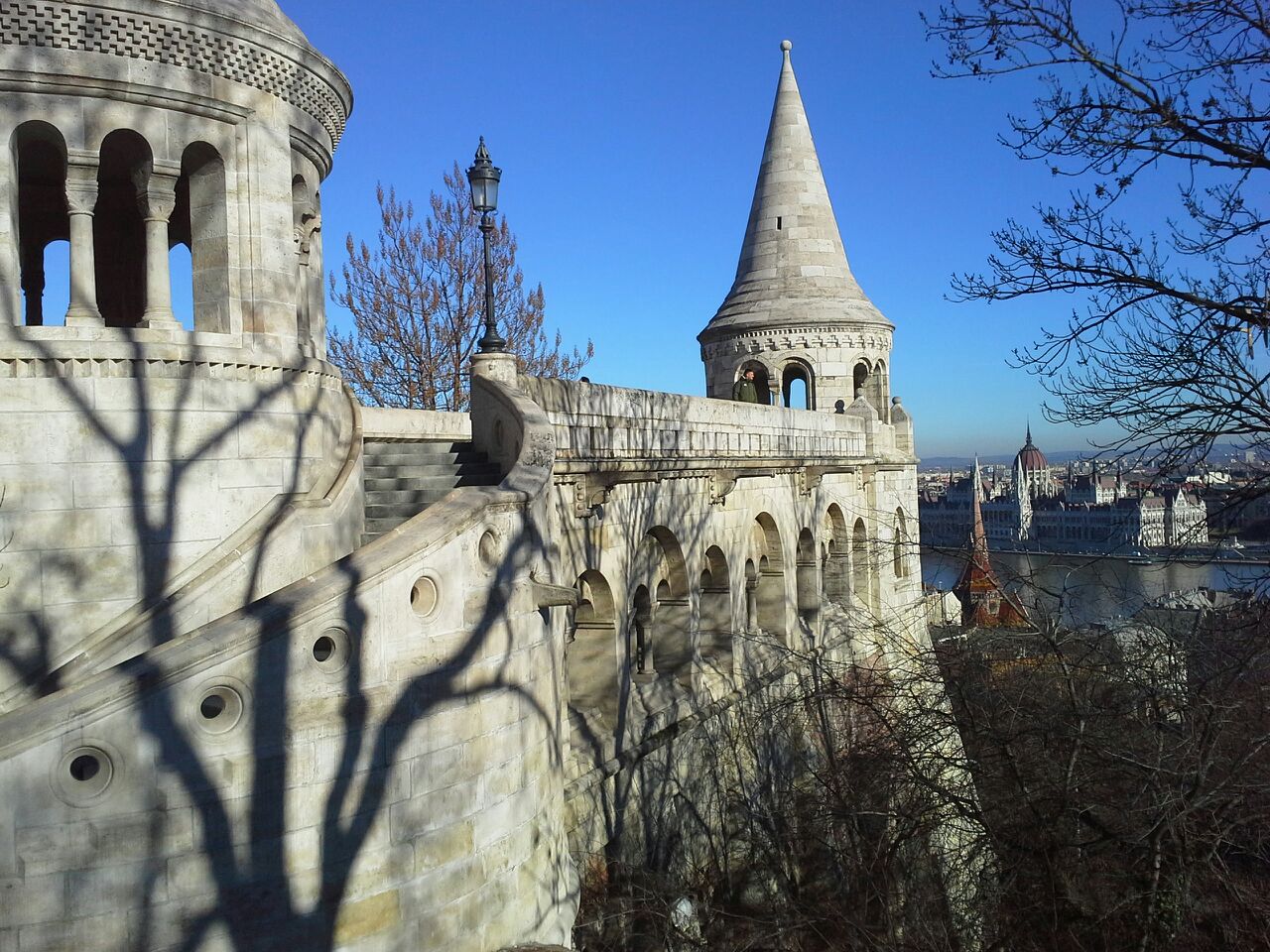 The complete guide to: Budapest travel

A trip to Hungary’s capital means being right on the Danube in one of Europe’s most charming cities. (Fun fact: The two sides of the city — Buda and Pest — were actually two separate cities until 1873.) Fantastic food and wine, eye-popping architecture, castles, museums, and a thriving café culture make Budapest an excellent place for a getaway, whether you’re heading there for a weekend getaway or a longer stay. When you decide to book your ticket, we’re here with everything you need to know once you arrive.

Getting to and from BUD

Once you arrive, there are a couple of ways to make your way into the city. Both terminals are accessible via public transport and buses run between Kőbánya-Kispest metro station and the airport. The bus to take is 200E and the ride takes about 30 minutes. Tickets can be purchased from transit company’s customer service kiosks inside both terminals, as well as from the post office located on the mezzanine level of terminal 2A, from newsagents (Relay store), from the driver, and from machines at the bus stop. It costs 350 HUF for a single ticket (or 450 if you buy direct from the driver).

Another option is to hop on a minibus. While much pricier than public transit, it’s a decent option if you’re saddled with lots of bags. Airport Minibus offers a shared ride anywhere in the city for a flat fee, and they have a booth inside each terminal on the arrivals level. A one-way trip to the city centre is 3,900 HUF per person and a return trip is 6,900 HUF.

Getting around in Budapest is relatively simple thanks to a variety of public transit options. It’s also possible to get around on foot since most of the city centre and historic districts are suitable for walking.

If you’re going further or don’t feel like walking, Budapest has an extensive system of streetcars and trolley buses as well as an efficient subway system. Tickets are valid for the metro, buses, streetcars, and trolley buses with a single ticket costing HUF 350 (450 from the driver). A block of 10 tickets is 3,000 HUF, or if you’re only in town for a few days you might want to grab a Budapest Card. They can be purchased with a 24-hour (4,900 HUF), 48-hour (7,900 HUF) or 72-hour (9,900 HUF) validity, and all cards include unlimited travel on public transportation, free entry to several museums, two free walking tours, and various discounts at participating baths, museums, restaurants, and spas.

Things to do in Budapest

One of the first things you’re going to want to do in Budapest is make your way up to Castle Hill, since this is where you’ll find a large collection of the city’s significant museums and historic monuments, including the Budapest History Museum and the Presidential Palace. Castle Hill is also a UNESCO World Heritage site and the sprawling grounds are home to several festivals throughout the year, including the Festival of Crafts over three days in late August (days vary, but always including August 20), and the Budapest Wine festival, which happens every year in September.

You can’t come to Budapest without spending some time soaking in a thermal bath, of which there are many all around the city (which is why it’s known as the City of Spas). There over 100 hot springs in Budapest — making it possible for the variety of thermal baths on offer, of which 15 are public. The Széchenyi Thermal Bath is one of the largest spa complexes in Europe and well worth a visit for a day of soaking or, as the locals refer to it, “taking the waters.”

Since there is so much to see in Budapest, why not take in the views from above with a visit to the Fisherman’s Bastion? Bring your camera — this is an epic spot for capturing panoramic views of the city. The lookout towers (of which there are seven) make for prime lookout points.

Foodie travellers or just anyone wanting to grab a snack among locals should head straight for Central Market Hall, the largest indoor market in Budapest. There are three floors featuring everything from produce, meats and cheeses, to local handicrafts, spices, and wine.

Bored with regular bars and pubs? In Budapest you can knock back a few in what’s known as a ruin bar. These unique watering holes are housed in abandoned buildings (from stores to factories) left unused after World War II. These are usually pretty hidden, as in, if you are just walking down the street you might easily miss one. But when you do find one, be prepared to be surprised. Each ruin bar is different and what you’ll see is a maze of rooms, all eclectically decorated and likely, resembling no bar you’ve ever drank at. The oldest ruin bar in Budapest is Szimpla Kert and definitely the one you need to see.

Looking for more things to do? Urban Adventures offers day tours in Budapest and beyond, all led by local experts that will give you a taste for local life:

Buda Castle Explorer
Hit the historical side of Budapest during this walking tour on the Castle Hill. Peek into the city’s oldest confectionary shop, hear stories and tales of the area’s past, and enjoy a few surprises along the way!

Fine Wines & Ruin Bars
Wine makes an excellent pairing for history, don’t you think? Discover Budapest old and new through its stylish wine bars, ruin bars, and underground hangouts. Enjoy the vibrant atmosphere of the city’s bar scene in the most eclectic part of Budapest, accompanied of course by the best Hungarian wines and local finger foods.

Made In Budapest
Get off the beaten track and join us for a unique shopping tour of beautiful Budapest. We’ll help you discover quirky stores in hidden neighbourhoods and meet the artisans behind the products. If that weren’t enough, we’ll show you how easy it is to ride the tram and point out some of the city’s hidden gems as we traverse its streets. Shopping bags at the ready!

Best Beers of Budapest
Sample some of Budapest’s best beer while discovering up-and-coming neighbourhoods and parts of the city that few tourists visit. Bond with other beer drinkers as you sip local brews in unique bars and breweries, sample local snacks, and see for yourself why Budapest is becoming such a great beer-drinking destination.

Private Budapest Cooking Class
Visit a Budapest market that tourists don’t know about and discover the fresh, seasonal ingredients that excite locals! On this private tour, you’ll meet affable stallholders and try our favourite salamis and pickles before cooking an authentic lunch, with your local guide on hand and happy to spill the secrets to preparing the perfect Hungarian feast.

Watch for a sneak peek some of the delicious dishes you can try on our Bites and Sights food tour!

Budapest on the big screen

Get amped up for your trip to Budapest by watching a few movies shot in the city, including Tinker Tailor Soldier Spy, Spy Game (where Budapest stands in for Berlin), and I Spy.

Listen to some classic Hungarian bands that influenced musicians to follow. A few options worthy of your listening time include Omega (whose song Gyöngyhajú Lány was sampled by none other than Kanye West in his song New Slaves), and Piramis — at one point one of Hungary’s most popular bands.

Read up before and during your trip to Budapest by picking up (or downloading) a copy of Budapest Noir: A Novel by Hungarian writer Vilmos Kondor, or Culinaria Hungary by Aniko Gergely — great for anyone interested in learning more about Hungarian cooking.

Get ready to discover the best wine venues and ruin bars in Budapest! We’re going to share our favourite city stories with you, paired alongside some of the best Hungarian wines. We’ll start our evening adventure in the main junction of the city and wander over to the Old Jewish ghetto to discover the coolest local hangouts by night.