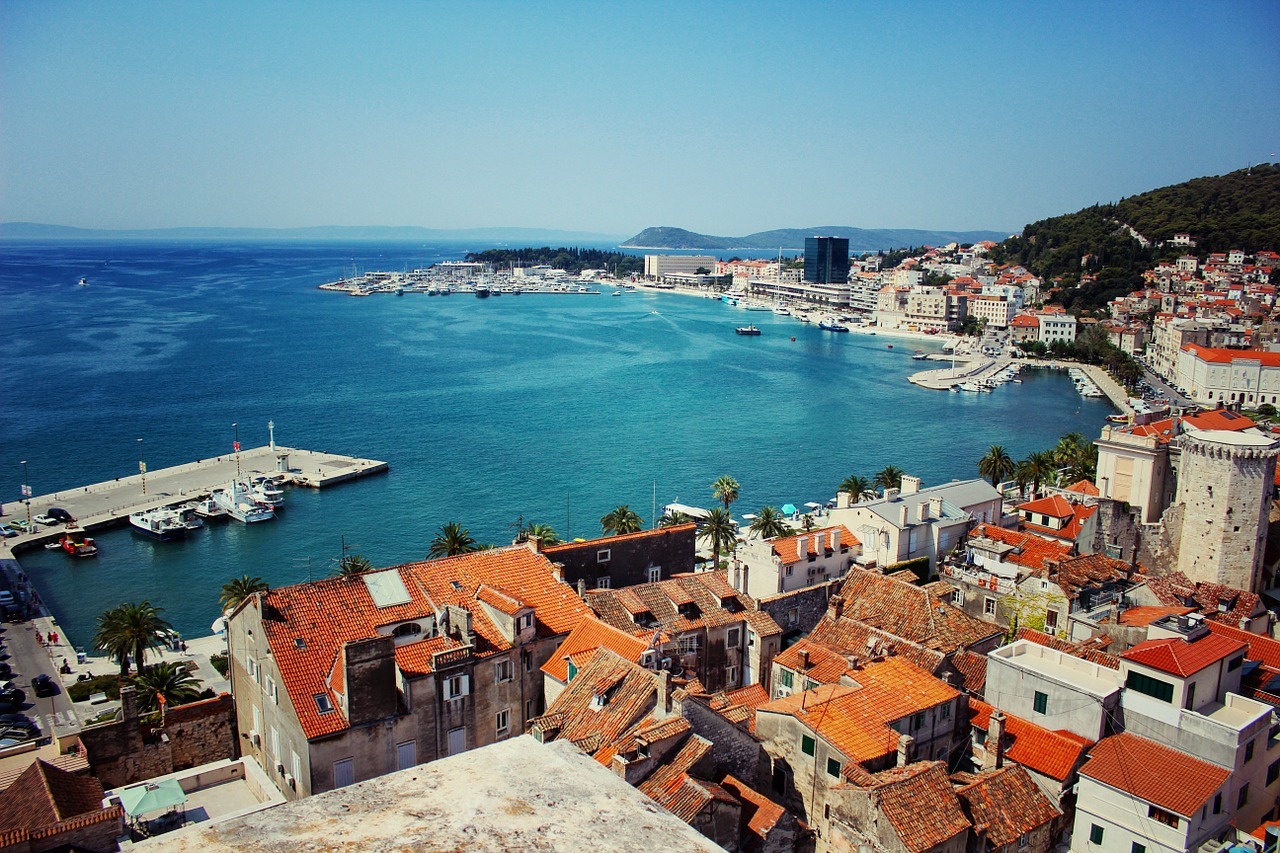 The complete guide to: Split travel

Split is Croatia’s second largest city and the largest city on the Adriatic coast. At one point just a stopover on the way to Dubrovnik, Split has become a go-to destination in its own right thanks to a welcoming blend of old and new. Majestic and imposing Roman ruins sit alongside trendy shops and bars, while close proximity to sandy beaches, towering mountains and forested parks make Split an ideal getaway for any type of traveller. Ready to go? Our local Split tour guides have you covered when it comes to getting there, getting around and where to spend your sightseeing time in scenic Split, Croatia.

Getting to and from SPU

The bus makes an easy option for getting to and from the airport in Split. Pleso Prijevoz buses pick you up right in front of the main terminal and run according to arrival times of flights, dropping passengers at the main bus station just next to the old town. You can check the timetable here. The trip takes around 40 minutes and a ticket costs HRK 30.

Public bus No. 37 stops just in front of the airport at 20-minute intervals on weekdays and 30-minute intervals on weekends. A ticket costs HRK 17 one-way. Cross the street and wait at the stop there (about 150 metres from the airport exit). Just note that this bus doesn’t drop you at Split’s main bus station but the local bus station about 1.5 kilometres from the city centre. From there you can walk into town if you don’t have a lot of luggage, or take a taxi or local bus.

Taking a taxi is also an option, albeit a pricier one at around HRK 300. But if you have a lot of luggage, this might be the better option. The journey into town takes 30 to 40 minutes.

Public transportation in Split is very well-organised and run by the company Promet Split. There are day bus (lines 1 through 18, 21 and 22) that run from 5am to 11pm, and three night lines (23, 39 and 40) running Fridays and Saturdays only. You can find maps and schedules for each line at their respective stops and buy tickets on the bus for HRK 11, or from Promet Split kiosks near each bus stop for HRK 9. Transit is fairly easy to navigate in Split since the city is covered by one zone, so a ticket is good for one trip anywhere in the city.

Walking is also a great way to get around Split, and is very safe so long as you keep your wits about you (as is the case anywhere you go). All of the most important sights and highlights in Split are in the old city centre, making exploring on foot an ideal way to see them all.

Things to do in Split 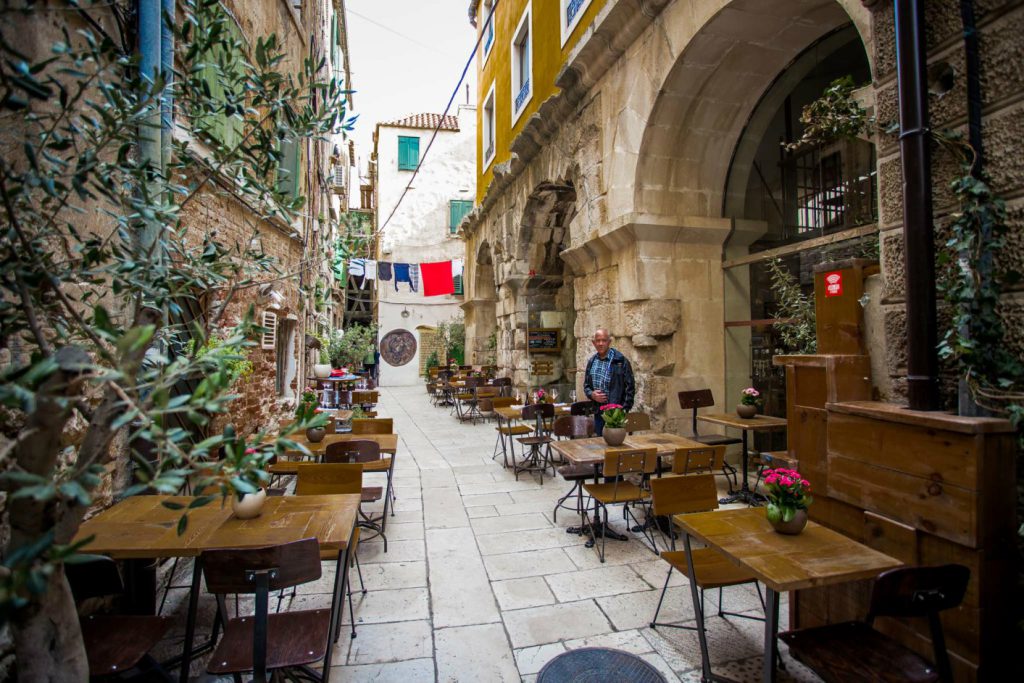 Start your sightseeing in Split with a day exploring the Old Town, much of which includes the sprawling ancient ruins of Diocletian’s Palace, one of the best-preserved sights of Roman architecture in the world. The complex makes up the UNESCO-listed historic core of Split and is a fascinating labyrinth of winding streets filled with shops, cafés, bars and restaurants.

If you really want to feel like a local, spend a few hours on Bačvice beach and join in a game of picigin, a sport played on a sandy beach in shallow water. The sport involves a group of players hitting a small rubber ball between them, trying not to let the ball hit the water. Bačvice beach is famous for the abundance of locals playing picigin all year  round, no matter how old are they. The beach is about a 10-minute walk from Split’s main bus station and ferry terminal.

It’s also a quick 10-minute walk from Old Town through the small neighbourhood of Veli Varoš, up to the wooded heights of Marjan Forest Park, where you’ll find winding paved paths ideal for walking or biking, beaches and forested areas. The park is about equal in size to New York’s Central Park and also home to various lookout points as you ascend towards the top where you can take in some amazing views of the city as well as nearby islands of Brac and Solta. If you want something to eat or drink while you’re there, stop for a drink at Café Vidilica, which overlooks the port.

Spend some time browsing Split’s green market (Pazar), located on the eastern side of Diocletian’s Palace. It’s a great place to get a feel for local life and to pick up a few goodies from the piles of fresh fruit and vegetables, olive oils, wines and other traditional foods. The beach is about 10 minutes away, so the market makes a good spot to stock up on snacks before you stake out a spot on the sand. On the other side of the Old Town you’ll find the traditional fish market (Ribarnica), which is also worth a look.

Depending on when you’re visiting, the Split Summer Festival runs for about a month from mid-July to mid-August. The popular festival features open-air theatre, music and dance performances at various venues around the city, including in and around Diocletian’s Palace.

Looking for more things to do? Urban Adventures offers day tours in Split, all led by local experts that will give you a taste for local life:

Secrets of Split
Drink like an emperor, dine like a Dalmatian, and do as the Romans do on this tour of vibrant Splicani life. You’ll learn the secrets of Diocletian’s Palace while wandering this colossal 1,700 year old estate. Explore a traditional fish market where locals select the freshest seafood, then feast like a Roman emperor on local Dalmatian wine and traditional delicacies.

Game of Thrones Tour
Calling all Games of Thrones fans! Let us transport you out of modern-day Split and into Westeros on this walking tour of Diocletian’s Palace. This impressively preserved Roman camp will bring Game of Thrones to life as you walk in the footsteps of the characters, plot your revenge in its narrow streets like Khaleesi, and dine on a feast fit for Tyrion.

Dalmatian Wine and Dine
Mediterranean cuisine is some of the healthiest food you can eat — and also some of the most delicious, which, let’s be fair, is what we really care about! On this Croatia tour, dig into a traditional Dalmatian meal, sample local wines and olive oils, and learn all the culinary secrets of Split.

Wars, Warriors, and Reforms
Take a trip through time on an historical tour of Split that goes from the days of Diocletian to the fall of Yugoslavia. Chat with a local who saw the ’90s conflicts first-hand, and share stories of Croatian culture over a tasty picnic in the park.

Split Through a Woman’s Eyes
This tour is for you, dear women! We are inviting ladies from around the world to meet up and discover our incredible city with us, get to know one another and make some special new friends. We’ll take a stroll together around the old town, stopping to admire heart-stopping vistas and ancient architecture before enjoying a hearty dinner of Croatian tapas.

Split on the big screen

Game of Thrones fans might want to re-watch some of the show before visiting, since a lot of the hit HBO show is filmed throughout Split. And, of course, our Game of Thrones tour is the perfect way to spend a day seeing the show’s filming locations (and feeling like you’ve just landed in Westeros).

Klapa music is a form of traditional a capella singing in Dalmatia, and since 2012 has been included on the UNESCO Intangible Cultural Heritage List. Check out an example here, and then you can listen to this form of live music in Diocletian’s Palace every day in the Old Town.

The People We Were Before by Annabelle Thorpe is a novel set in Croatia, against the backdrop of the country’s tumultuous past.

For more info on the city or to book a Split tour, contact us at info@spliturbanadventures.com.

Split is the main urban, cultural and busy centre of Dalmatia, as well as an eternally young city that lives life at a slower pace. Come experience that local leisurely pace on a locally led tour!