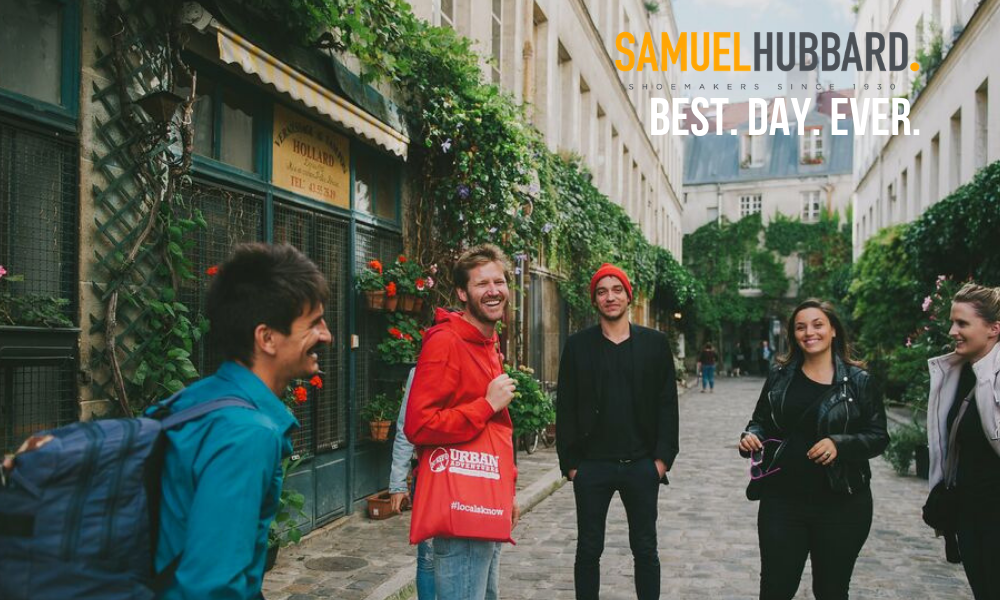 An epic foodie adventure through the streets of Paris? Mais oui, bien sûr, where do we sign up? At Urban Adventures, actually, as luck would have it. Welcome to the City of Lights, the City of Love, a city of cobblestone streets and crepes and churches and an ever-present touch of magic. Paris is romance, Paris is fashion, and Samuel Hubbard has just the thing to keep you looking chic and on your feet throughout an afternoon tour through the Marais district. Pour les hommes (the men) we recommend the Ivy Legends and pour les femmes (the girls) we suggest getting on board with the All Aboards.

You’ll meet your guide at Notre Dame Cathedral in Paris’ fourth arrondissement. Along with the Eiffel Tower, the cathedral is perhaps the most recognised Parisian sight and was, of course, at the centre of Victor Hugo’s The Hunchback of Notre Dame (and the incredible Disney film that followed). Unfortunately Quasimodo isn’t actually a resident of the bell tower, but there’s no time for hunchbacks as there are Parisian secrets waiting to be uncovered. Continue to the Hôtel de Ville, Paris’s town hall, where public executions were once carried out. It was here that Robert-François Damiens, who attempted to assassinate King Louis XV, became the last man in France to be drawn and quartered, a gruesome punishment at odds with the building’s beautiful façade.

After ticking off these historic sights, your Urban Adventure takes you into the warren of streets, the Marais, which has long been Paris’s aristocratic district, and hold onto your berets: you’ll walk past a legendary bakery that was voted as having one of the best baguettes in Paris. Forget the diet and embrace France’s carb-heavy cuisine, safe in the knowledge that we’ll be walking the city’s streets and burning off those baguettes all day. Speaking of which, here’s your first chance to try a famous pastry called ‘merveilleux’ and it’s as good as it sounds, a kind of meringue sandwich with cream and sweet toppings. Tres bien indeed.

Hear your cute little oxfords clip-clop down Rue Saint-Croix-de-la-Bretonnerie, one of the oldest streets in the Marais and the centre of the French gay scene. Your guide will explain how the area transformed from sordid to sought-after and back again, and why it is now known as the ‘BoBo’ area — the Bohemian Bourgeoisie. And there’s nothing more ‘bougie’ than a macaroon from a Parisian pastry chef of high repute.

You may be feeling a bit of extra weight pressing down on the custom Vibram soles of your loafers, and things are only going to get heavier and tastier as the Urban Adventure continues down Rue des Rosiers, the Jewish Quarter, with falafels and delis and a pasty described as the fattiest in all of Europe — the Kouign Amann. It’s common to see all kinds of Parisians, from students to pensioners to the suits and the artists, lining up outside the falafel stands and enjoying their meal in a nearby park.

From here, the adventure takes a distinctively ‘BoBo’ turn as you stroll back towards the South Marais and Saint Paul’s Church. Your Urban Adventures guide, who by now has probably stopped six or seven times to chat with friends, will take you to a local wine bar for a serious wine tasting. French wines are some of the most delicious in the world — the French will tell you that there’s no competition — and you can also sample French liqueurs including cognac, Armagnac and brandy, all accompanied with a cheese platter or charcuterie board. Enjoy the well-earned break, but don’t slip those loafers off just yet as there are two more historical spots to explore.

Victor Hugo, who wrote the Hunchback of Notre Dame and Les Miserables, lived on the oldest and most beautiful square in Paris: la Place des Vosges. In the summertime this square is thriving with Parisians enjoying the sunshine, some football, a game of pétanque or a picnic and a few drinks. From here, it’s a short, final stroll to the Bastille, the prison that was captured on July 14, 1789, triggering the world-changing French Revolution. The Urban Adventure ends here, but your Parisian adventure has just begun. With the tour wrapping up around 6pm, your guide will have plenty of suggestions for some evening entertainment: best point those shoes towards a dance floor or candlelit dinner. This is the City of Love, after all.