Blog > The essentials of drinking vodka in Russia 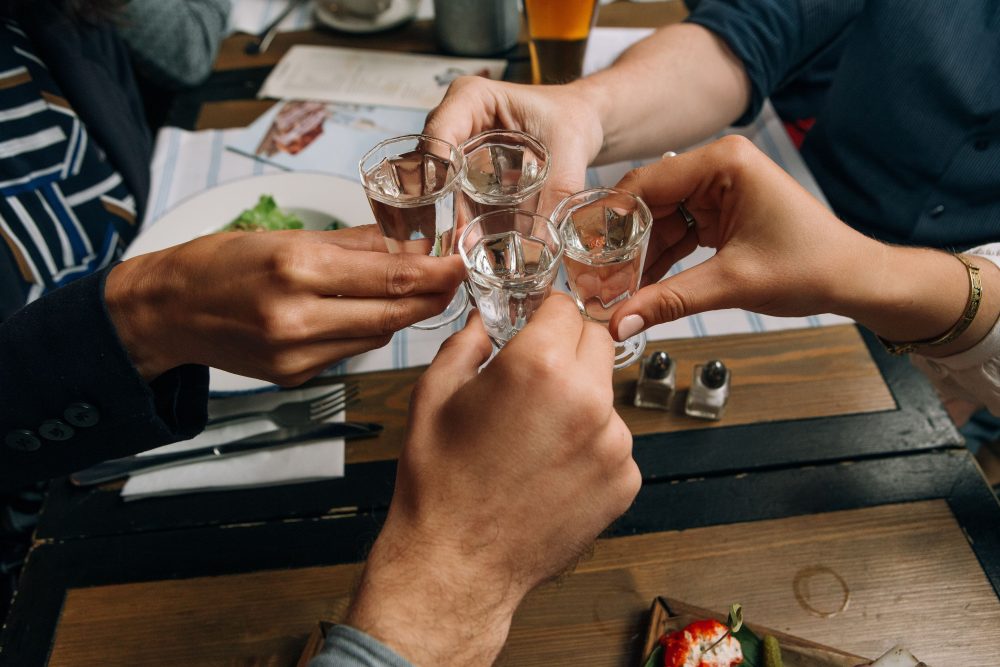 The essentials of drinking vodka in Russia

We’ll bet most visitors associate Russia with vodka. And while there is definitely a connection between the liquor and our country, it’s not as simple as you may think. Firstly, where did vodka come from?

There are several stories about the origin of this high-alcohol beverage. We’ll omit the jokes about vodka being made by the bears in Ushanka and stick to the facts. It is believed that Zosima Panapolis, a monk from ancient Alexandria, first experimented with strong drinks. A more accurate explanation is that in the 14th century, the alchemist Arno de Villeneuve first obtained wine alcohol for medicinal purposes.

According to history, the alcoholic drinks appeared in Russia in the 14th century thanks to foreign ambassadors who brought grape alcohol. A century later, one monk learned about distillation and began to produce alcohol, and then vodka. To sum up: we have to thank science and religion for vodka.

With the history of vodka out of the way, let’s get down to the basics of drinking it.

The rules are simple: it should be served chilled, accompanied with salty snacks. It is a well-established tradition that chilling vodka will soften its taste, and you should drink it in one gulp. Afterwards, enjoy some pickles, mushrooms or other snacks.

There is also another option: it is believed that to appreciate vodka fully, you should have a glass of water afterwards. That helps reveal the complexity of the alcohol, from taste and aroma to the body. I know what you are thinking, “What taste? It’s vodka!” Still, there is a variety.

During the reign of Elizabeth (not Britain’s Queen Elizabeth — we had our own Elizabeth in Russia, too) in elite salons, there were different kinds of vodka, with names that started with all the letters of the alphabet. Such as apple, barberry, anise and so on. Such a collection, right? Another gastronomic discovery you can make about vodka is that it clears the taste buds. So if you were to eat a sandwich with caviar after drinking vodka, you’d feel the whole charm of what you are eating.

Now, we’ll learn the etiquette of drinking in Russia.

Drink with a friend or in company. (Drink all by yourself and you might be considered an alcoholic.) In Soviet times there was a popular phrase, “Let’s organise the drink for three people.” This is explained by the fact that vodka previously cost just under one ruble. The rest was spent for a simple snack in the form of melted cheese called “Friendship.” That’s why it was profitable to gather three people, each spending one ruble each.

Make a toast before drinking. Or at least wait for one. Some European traditions consider saving toasts for very special occasions, while in Russia it is absolutely essential. The main purpose of the toast is to turn the process of drinking into a demonstration of friendship, respect and good intentions.

The tradition of making a toast began from ancient sacrifices. People believed that for the splashed wine, the Gods would bless people with health, wealth and happiness — all the things they wished for each other. According to Russian tradition, the first toast goes for the pleasure of meeting, the second to the parents and the third to those who are gone or for love. While the toast is being spoken, one does not eat, drink, talk or check their phone! Clinking with an empty glass or with a soft drink is considered unacceptable. Traditionally, men serve drinks for women and don’t put the empty bottle on the table.

That’s pretty much all the basics you need to enjoy your time in Russia. Zazdarovje! (To health!)

After meeting your local guide, you will head over to Moscow’s hottest district for nightlife: Myasnitskava Street and beyond. This area is a magnet for the hip crowd, where you’ll always find a concert or some other fun activity going on. Its cosy labyrinth of side streets is also full of fabulous places to eat out.