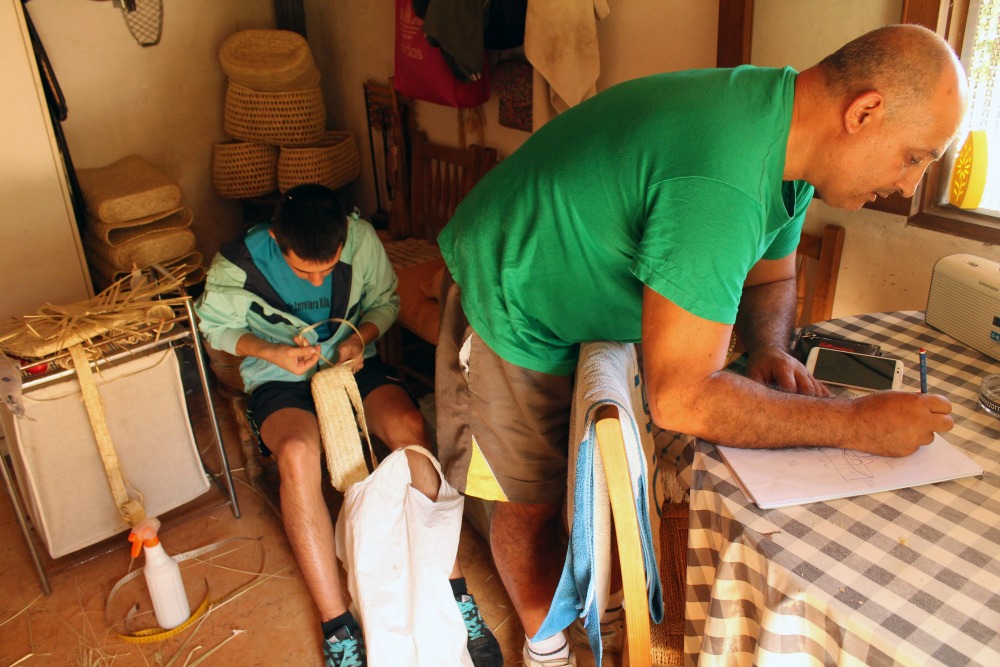 On Mallorca, as well as a lot of other Mediterranean islands, there are many ancient artisanal traditions that we are at risk of losing. Making and selling handmade products has become harder since so many buyers no longer value the hours of labour required, or they fail to recognise the quality in a handcraft product versus an industrial one. Sometimes people follow the price instead of value.

I recently got to meet with one of the last straw artisans on Mallorca island: Guillem, an artisan from Artà who specialises in handmade bags. He personally collects palmito leaves on the mountains, and transforms and weaves these leaves by hand to create his senalles — the traditional straw bags that locals would use for shopping at the market, going to the beach, or working in the fields. Guillem is the last vestige of a trade that settled in the mountains of Artà and Capdepera, along special parts of the Sierra de Levante where palmito grows.

His bags are entirely handmade, natural and ecological, and I love them — but not just because they are part of our local culture. I also love them because they are beautiful. If you come to Mallorca, they are both a useful and unique souvenir for you to buy.

But unfortunately, there are many cheaper fake bags coming from Morocco and other nearby countries, which try to imitate the local art. Guillem knows very well how to recognise a fake, but if you’re not sure, the easiest way to ensure you’re buying an authentic one is to know which shops to visit. If you are in Palma, I advise you to go to Mimbreria Vidal. If you have the chance to go to Artà, you can go to Guillem wife’s shop. There, you can buy the best senalles of Mallorca — made in Guillem’s home, no less.

Guillem can be described as an artist, a creative, an artisan, a dreamer, a historian, a teacher, and a wise man — all these descriptions are true at the same time.

Guillem knows that he was born for this job. He also knows that he has a mission: to share his local knowledge with as many people as he can. That’s because he is the last palmito artisan alive on the island who does this as his profession. That’s also why he cooperates with us to organise private tours featuring the art of these handmade bags, and why he teaches and participates in local workshops.

For as long as he can remember, Guillem has been passionate about the art of palmito. And it’s that passion that has brought him to keep going, even in this era of mass-produced goods. There are no economic reasons to work with your hands in a period when everyone works with computers. Maybe Guillem doesn’t earn lots of money for the huge quantity of work he puts in (he earns EUR 2 per worked hour), but he earns happiness and loves what he does. That’s why he keeps this old magic knowledge alive, honouring this part of the Mediterranean and Balearic culture.

EXPERIENCE: Learn more about Mallorcan handicrafts on our Made In Mallorca tour

When I entered Guillem’s house, palmito straw was everywhere. There were rolls on wall shelves, finished bags and baskets on the table, and straw ordered by size, colours and texture on the floor. Guillem and his son were seated on small straw stools in the middle of the room and they were tailing their bags. Their hands were moving so fast! A little radio was playing pop music. Two baby cats and one little dog walked around the straw and played together.

I immediately felt at home. It seemed to me like a Sunday afternoon from another time. We chatted and their task at hand seemed more like a hobby than a job. I understood that they were doing it for pleasure. They loved what they were doing.

I asked him about his passion and when he first realised that he wanted to be an artisan. He said he learned how to work the straw when he was a kid. At that time, his mother was tailing the bags and he was working with her to help the family economy. His father died when he was a kid and there were five children. So, for his mother, working with the straw was an economical need, not a hobby. He learned how to tail the straw bags like his mother, and he met a lot of women who taught him more straw knowledge.

“When I was little, I always accompanied my mother, my grandmother, and an aunt who produced baskets on the street with the neighbours,” he said. “In those days, there were many people making products of palm — together, chatting and listening to the radio dramas. At that time, the palmito would be worked in an assembly line. Each woman specialised in a different level of the production. So nobody knew the entire process. Just me. I discovered it because each time I needed to bring the bags and the palmito from one woman to another, I would ask them to teach me their knowledge. We were producing palmito souvenirs for the Canary Islands and for the other Balearic Islands. This process was executed by many families of Artà and Capdepera as part of the livelihood of the family economy.”

He continued, “After tourism became massive on the island, women abandoned this art to work at the hotels. The pay was better. Some women continued the straw tradition but when they died, nobody replaced them. Times were completely changed. Now, almost nobody wants to continue learning a trade that pays two euros per hour.”

Guillem and his wife collect the palmito for two months, in July and August, so it can dry before fall comes. They collect it in the mountains around Artà and in the natural park of Levante — scientists found that the collection of palmito actually makes the plant stronger, so they’ve allowed Guillem to enter the park and extract the leaves he needs. It’s a sort of equilibrium between the nature and traditions of the island.

The terrace of Guillem’s house is where he dries the palmito after they have collected it in the mountains. After that, it is put under a roof and sulfured for 12 hours, a process that makes it softer. Then, if they need to, they colour the palmito. It’s all then sorted based on quality, colour, and size. Finally, they braid it. Only after all that does the process of actual bag-making being. Imagine the amount of work behind a single homemade bag.

“How do you see the future of your art?” I asked Guillem.

He seemed sad. “We, artisans, would need a regulation on it. There are a lot of fakes around. In the local market I go to, I have seen a lot of fake artisans selling stuff as handmade from Artà — but in fact, under the table they had boxes saying ‘made in Taiwan’ or ‘made in Morocco.’ We cannot compete with them because to have enough stock, I need to work hard. If I go to a local market and I sell out of my products, then the week after I cannot go on the next local market. But they can go because they have an industrial stock. It is difficult to see a future without transparency and fair rules.”

I left Guillem and his son working in peace. They had a big order from a French woman to work on. It would be two more weeks to finish the entire job.

Want to meet Guillem and learn how to make your own handmade bag inside a Mallorca house? Just contact us and we will set it up for you!

Feel like customising our Mallorca tours to make exactly the tour you’re looking for? Let our team of local experts build the perfect itinerary just for you.