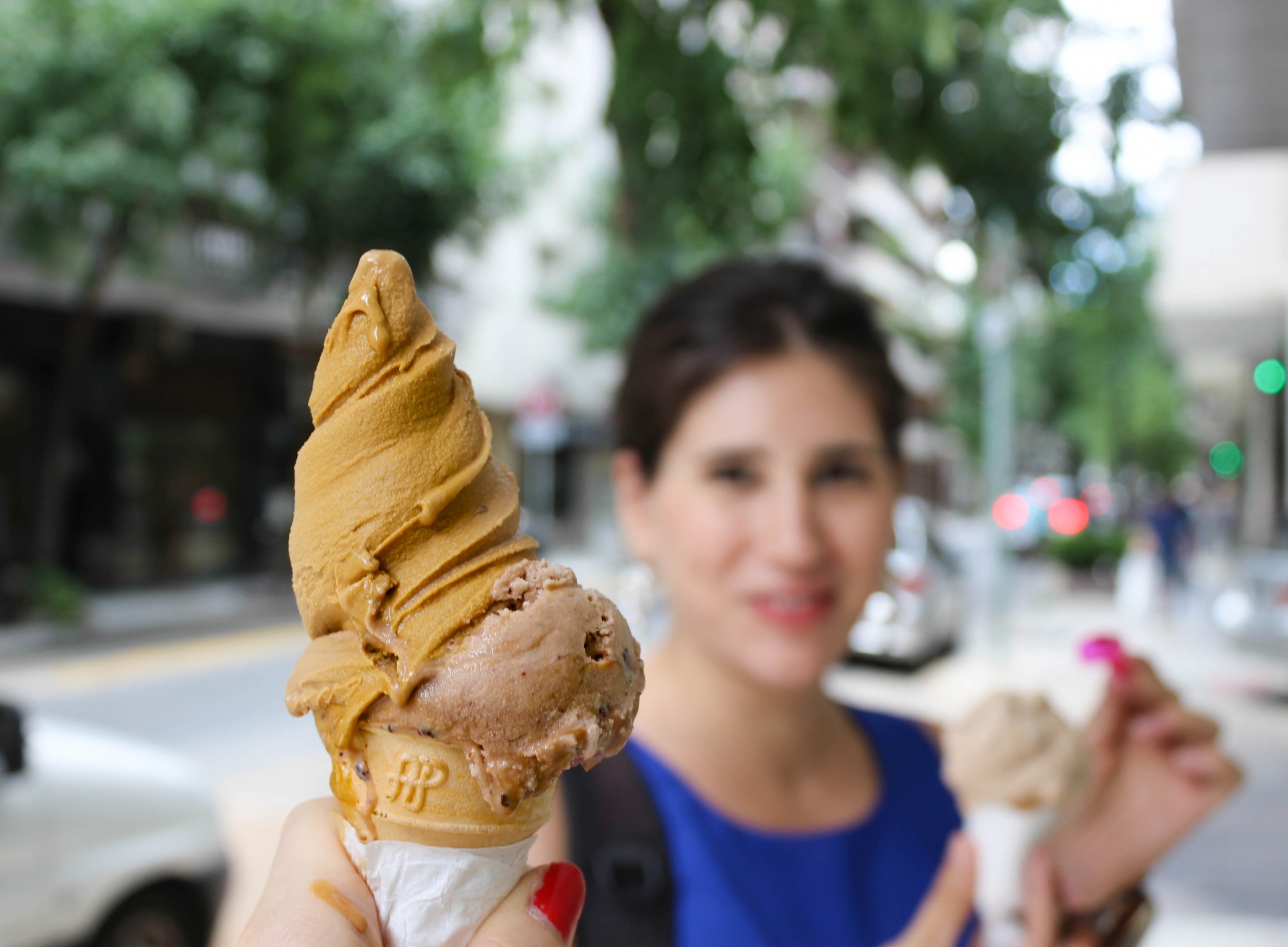 Buenos Aires is one of those cities you can easily fall in love with. The late night tango shows, art around every corner, palm trees swaying along the streets, the flavour-packed asados (BBQ), friends lounging in the park as they sip on mate — it’s a city for dancers, nature lovers, art aficionados, and, of course, foodies and chefs.

Although I’m no chef, I do love to try local cuisine. But as a tourist in Buenos Aires, sometimes it can be overwhelming just figuring out where to start in a province that’s the size of the country of Spain. So, on a breezy South American summer’s day, I met with Lucila, a Buenos Aires local foodie, to show me the best spots to eat in this romantic Argentina city.

It is said that Argentinians are great at three things: vacations, fashion, and food. And in just one afternoon with her, Lucila certainly proved all this to be true. She arrived in a brightly coloured skirt with lemon-hued sandals and instantly started telling me about her recent travels and her city’s cuisine as we walked to our first stop of El Sanjuanino.

“I believe food tells a lot about our culture. It is more than just a cuisine, it is our identity,” she explained as we walked the sunny sidewalks of Recoleta.

When we entered El Sanjuanino, the waiter’s face lit up. He and Lucila embraced and chatted in rapid Spanish as he walked us to our table; it was clear they were long-time friends.

“These are the best empanadas in Buenos Aires,” said Lucila as she handed me one to nibble on. I had been in the city for two weeks already and had had empanadas three times but none were as savoury and delicious as these.

This is just the appetizer | Photo by Sarah Funk

“Empanadas are meant to be eaten before a meal as a starter in Argentina,” said Lucila. The reason? They tempt you for the asado, barbecued beef along with various other meats that are cooked on a parrilla (grill).

And so, it was appropriate that once we finished our empanadas, we headed to Rodi-bar Restaurante for authentic Argentinian asado. Rodi-bar is the place locals go to enjoy incredible steak in a laid-back atmosphere. When we stepped through the door, Lucila was greeted with open arms by one of their waiters who enthusiastically sat us at a nearby table overlooking the traditional restaurant (clearly, she knew a lot of food folks in this town).

“I decided to become a tour guide because I love my country,” Lucila explained. “Even though many people talk about the horrible things in Argentina, like the corrupt government, I want to make the focus about the positives in my lifetime. It is an amazing country filled with beautiful people, gorgeous landscapes, and a lot of things to see and offer. I want to share that story with people. Being a guide gives me the opportunity to have fun with people and learn different points of view.”

She continued, “Before being a tour guide, I always thought I wanted to be a mom. Now that I have my son, I think this is a good compliment to that. Sharing my country’s stories with tourists is a beautiful way to bring out the positives in my home.”

Lucila ordered us a bottle of Malbec wine to share. Our first dish was the traditional provoleta, a semi-hard provolone cheese seared on the grill until it’s melted with a crispy exterior and seasoned with a generous amount of oregano. As she poured the Malbec, she explained to me that much of the wine in Argentina comes from Mendoza, the wine capital of the country. She has family there and visits when she can to enjoy world-class wines and the region’s local food. The area is home to internationally acclaimed chef Francis Mallmann, who created open-flame cooking techniques inspired by Argentine gauchos and European migrants. 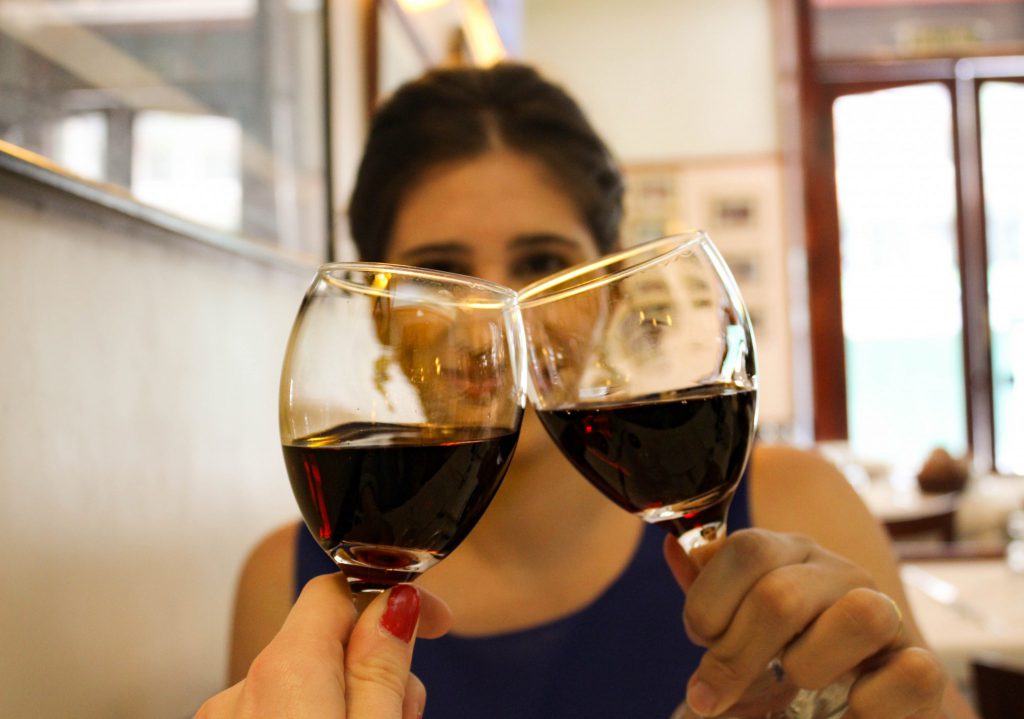 A bottle of Malbec between new friends | Photo by Sarah Funk

Once our Malbec was poured, Lucila encouraged me to pair it with the provoleta. “It is incredible together,” she said as she popped a slice of oregano-covered cheese in her mouth and took a sip of the wine. The cheese was creamy and well seasoned alone, but with the wine it took on another flavour dimension. Together it was a wonderful combination of cheese, herb, and a slight hint of oak. Incredibly savoury and satisfying.

Next came the steak and ribs, an Argentinian classic. “Argentines eat more meat than any other country in the world except Australia,” Lucila said as she sliced the filet. As someone who had been there for two weeks already, I felt I could vouch for that. I’d already had more steak in Buenos Aires than I’d had in three months in New York. 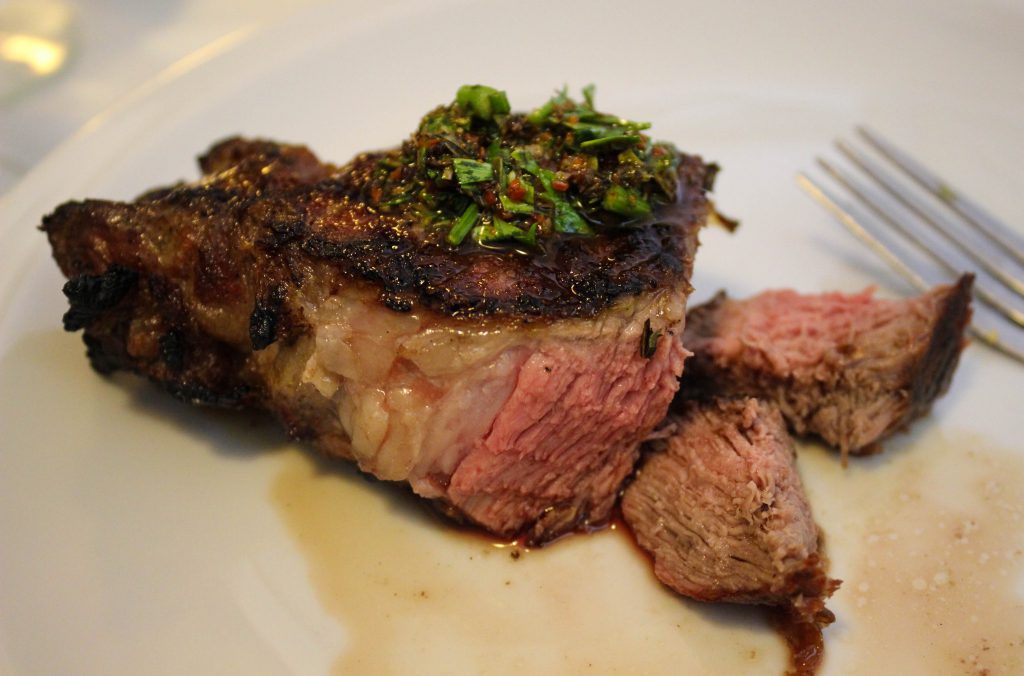 No Argentinian steak is complete with chimichurri | Photo by Sarah Funk

“We eat the meat with chimichurri sauce,” Lucila said as she spooned the vibrant green sauce over her steak. Chimichurri is made with finely chopped parsley, garlic, salt, pepper, oregano, chili pepper flakes, and onion, and adds a refreshing flavour to the juicy grilled steak.

“Argentine ribs are sliced thinner than those from the United States,” Lucila explained as she served the ribs. “We prefer it to be a centimetre thick.” The meat was cut through the bone and along the edges were flavour-filled fatty pieces, while the centre was lean and juicy with a charred taste.

As we enjoyed the rest of the meal, she showed me photos of her family, talked about her incredible 20-day honeymoon to Columbia (I told you Argentines are great at vacationing!), and shared with me her love for food. It was as if I was out to lunch with an old friend.

After our asado, Lucila insisted that we get Argentine helado (ice cream). “I didn’t know how special our ice cream was until I travelled to other places,” she said as we walked to Valence for their famous desserts. Rows of ice cream, that reminded me more of gelato than traditional ice cream, lined the counter.

Since Buenos Aires has an Italian influence, it is no surprise that their ice cream is as good (or even better, as Lucila says) than their Italian cousins. After much indecision over the vast flavour options, I settled on two: dulce de leche and alfajor (a local candy). The ice cream was served in a cone with a spoon stuck in the side of the helado mountain.

There is no other way to describe this ice cream other than by saying it is the best I have ever tasted. It was incredibly rich with powerful flavours and a smooth, silky texture. We walked to the park with our ice cream in-hand, where Lucila would share with me one final local custom: the art of mate tea.

Two weeks prior, I didn’t know that mate even existed, but after a few days in BA, I couldn’t seem to walk a block without seeing it. Argentines love their mate. You see them drinking it all day from little round cups. As we sat in the sunny park, Lucila showed me how to prepare this Argentinian tradition. 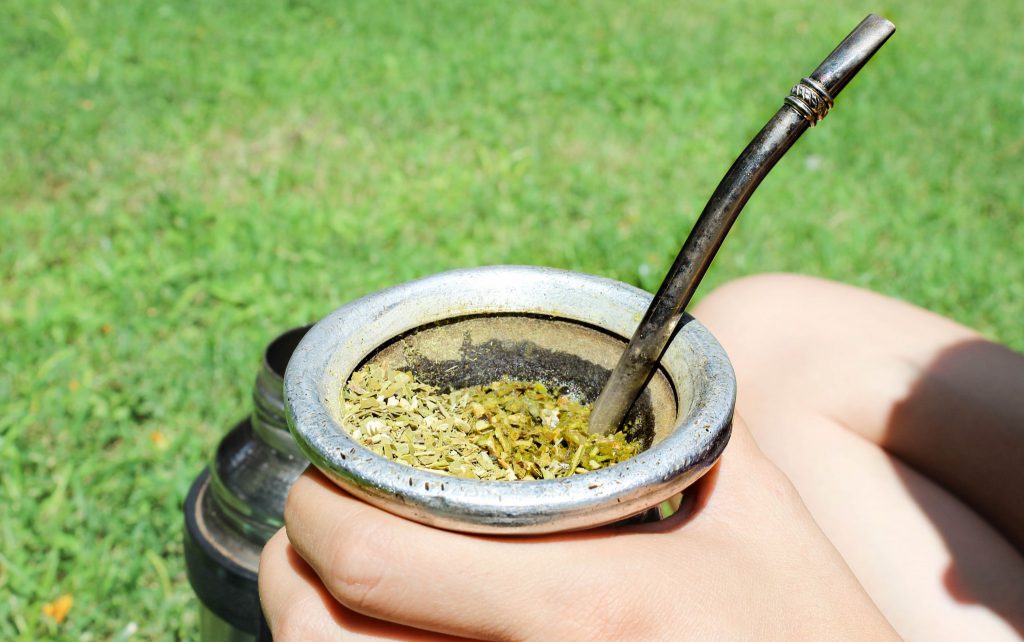 “Mate is to be shared with friends out of one cup and one straw,” Lucila said as she pulled out her mate cup (a gourd cut in half with a metal straw coming out of the top), a thermos filled with hot water, and a tin filled with mate tea leaves. “My family always wants me to make the mate. It is my specialty.”

First step, she explained, is to fill the mate cup three-quarters of the way with tea leaves, then put your hand on the top of the cup and flip it upside down. “This way we get rid of the excess tea powder that we don’t want to drink,” she said, brushing the powder from her palm and shaking the tea leaves to the side of the cup. “The trick is that you need to pour the water gently without disturbing the tea leaves.”

Lucila carefully poured the hot water from the thermos. “Now, place the straw in and don’t move it. You drink it right away and refill the cup with hot water as needed.”

Before having mate with Lucila, I had tried to make it myself, but it came out incredibly bitter. However, Lucila’s mate was perfect, with a taste similar to green tea but much stronger.

We passed the mate cup back and forth, chatting about beautiful Buenos Aires, the history of mate, and our own stories. I may not be a local myself, but at that moment, I felt totally Argentine.