Blog > One wrong turn in the Andes: A local guide’s personal tale 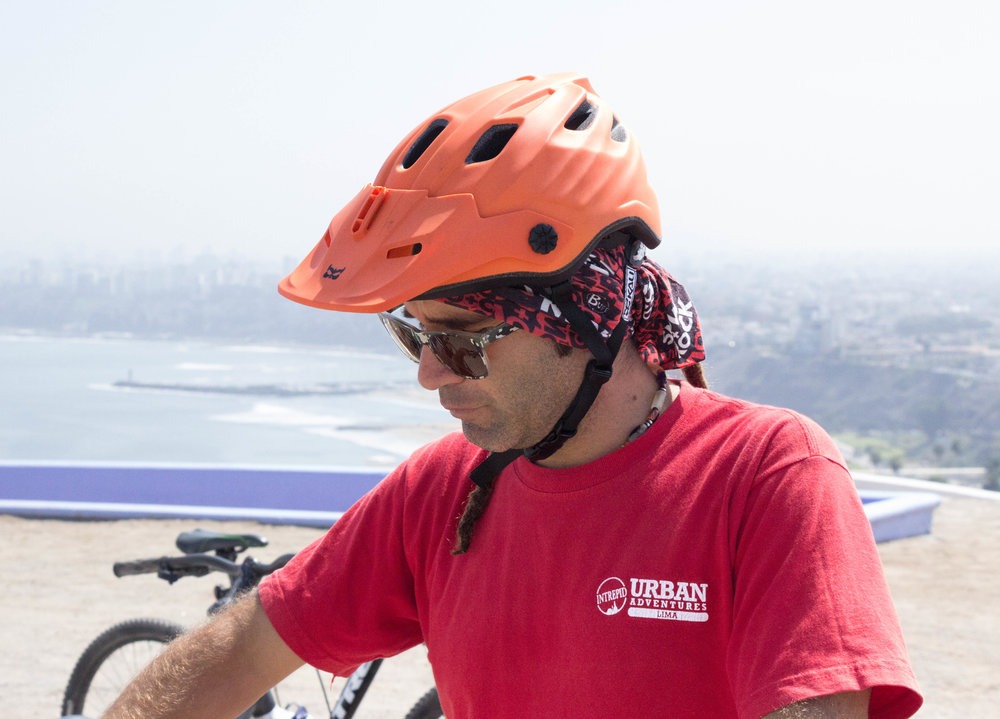 One wrong turn in the Andes: A local guide’s personal tale

“I was panicking. I screamed ‘Help! Help!’ And nothing. I asked my grandfather to look after me.”

Tito, a local guide with Urban Adventures, recounts his story to me as we sit on a bench in Parque Kennedy in Lima, Peru. It’s something that happened to him while he was biking. And it’s impacted his life ever since.

Tito grew up in San Miguel, one of the 43 districts of Lima. Today, it is filled with middle class workers, but when Tito was growing up, it was a lower income neighbourhood. His parents scraped together the money they had to buy him a gift that he would never forget: his first bike. It was a second-hand bike and Tito painted it black.

“I got a bike and never stopped biking. I would explore the city by bike and see other districts.” Having a bike allowed him to journey beyond his neighbourhood and throughout the rest of Lima. It also lit a passion for riding that would eventually inspire him when choosing his career: becoming a local guide for cycling tours.

Throughout his 14-year career as a biking expert, Tito has touched each part of Peru’s diverse landscape: the coast, the Andean highlands, the jungle. He’s taken week-long expeditions from Cusco’s Incan ruins to the thick Amazon jungle. Cycling from 5,000 metres high down to sea level.

For years, Tito did solo biking trips to map out new routes for his cyclists. “Besides being a biker, I am also a designer. I design bike tours,” he says.

He learned to work with tools, fix bikes and create strategic itineraries based on cartographic maps. “It’s important to know about elevation before [you go], because you know yourself and how far you can travel a day — but if it’s steep, you can’t travel as far”.

But despite his years of experience and knowledge, Tito learned an important lesson on one fateful trip. You can never be too prepared. This lesson came at a hard cost during a trip to create a new bike route for a local magazine.

During a standard day designing bike trails, Tito was forced to face the harsh realities of being an explorer. He and two colleagues were on an assignment to promote tourism in an untouched area of Peru, finding trails for mountain biking. Their goal was to create a route that tourists could use to enjoy the scenic highlands. As they biked along the dusty dirt pathways, they came to a fork in the road.

“There was a fork and we were hungry and tired. So we decide, which is the best way? The leader said ‘It is the upper one. I’m going to go up higher and I’ll find the trail.’ My other friend decided, ‘I’m going to go back to the bottom because I noticed there is a road and I’m going to follow that to town.’” The group was committed to finding a way to get to the village by bike.

Tito followed the middle trail. At first the road was comfortable, great for biking. Then suddenly, things took a turn for the worse. “The trail started getting narrow and difficult. There was one moment where there was a big drop on the right side. It was too steep. I decide to walk. It was too dangerous.” Tito walked his bike along the thin, winding path. It became windy and the temperature started to drop. The trees became bushes and the sun began to set.

Peru’s coastline is dramatic, even within the city limits | Photo by Sarah Funk

“I decided to keep going and I saw that I was almost on a cliff and it was getting dark.” Fear started to kick in. Tito knew that he had chosen the wrong road; however, walking back through the mountains in the dark would be even more dangerous. He felt trapped.

“In the darkness everything changes in the mountain. Your mind begins to betray you. The wind makes weird sounds and you start to panic.”

Armed with only an emergency flashlight, Tito huddled in the freezing temperatures in shorts, shining the flashlight towards the sky in hopes that someone would be searching for him. “I was afraid the battery would die before they found me.” He started to fear the worst.

“I was panicking and I screamed ‘Help! Help!’ And nothing. I asked my grandfather to look after me.”

After several hours, Tito saw flashlights above him. It was a rescue crew on the cliff face. They came down on ropes and pulled him up to the village above. He says the experience changed who he is today. “When you have a situation [like this, that] is when you learn.”

Tito doing what he loves: showing travellers the Best. Day. Ever. in Lima | Photo by Sarah Funk

Today, Tito is always prepared in case of an emergency. He says the experience taught him to never hurry when exploring, and has changed how he prepares for the powers of nature, even beyond biking. Lima is known for having tremors and in his home he always has a backpack of reliable equipment, in case of emergency.

He has also shared these lessons with his five-year-old son. “I told him the story. How he has to learn to respect nature. The mountain is strong. Water is strong.” Together, Tito and his son surf and bike. His son learned how to bike when he was only a year and 10 months old. Tito’s pride in him is obvious. “He knows more than I did at seven and he’s five!”

His son often waits for him in the park when Tito is giving a bike tour with Urban Adventures, and mimics what his dad does while fixing bikes.

Tito loves not only sharing his passion for biking with his son, but also with visitors. He enjoys taking tourists around the diverse city of Lima. “Lima has archeological sites, nice ocean views, local markets, good food and interesting culture. When I design the tours, I think about the people who are coming. What they want to see.”

He gives me a bit of advice for our own upcoming bike tour. “Bring sunscreen and water. Many people don’t do this. It is good to be prepared.” It’s a minor suggestion, but a bit of a nod to nature’s strength when you’re out exploring.

From a bench in Parque Kennedy to the highlands of Peru, you will always find Tito ready for an adventure.

Get your cycle on with this two-wheeled journey through boho neighbourhoods like Barranco and Chorrillos and modern areas like Miraflores, hip hangouts of Lima! Much more than just a Lima city tour, this epic bike adventure will show you all kinds of hidden gems inside the city and outside of it too!