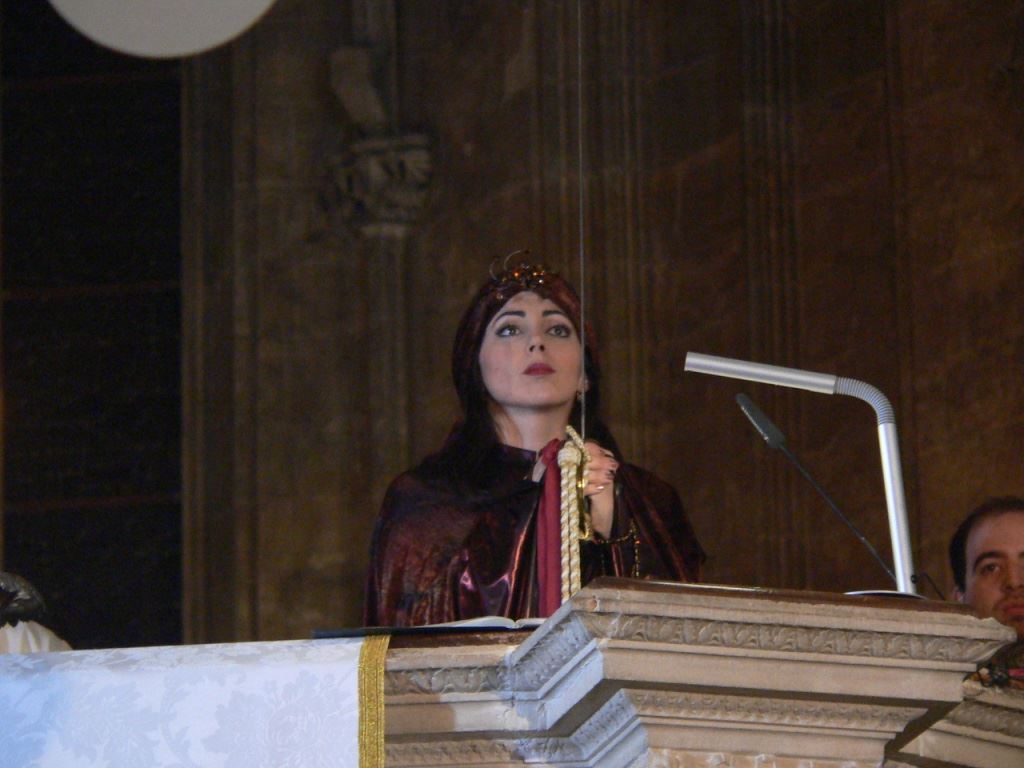 A legend says that in Mallorca, at the beginning of time, the land was petrified by the snake-haired Medusa of Greek mythology. Since then, time has stood still in Mallorca, traditions never changing. As far as damnations go, this was a pretty good one, as Mallorcan traditions are beautiful and our life here remains pretty relaxed.

Traditions in Mallorca are very much a part of locals’ daily lives. In many ways we still live as we did in the past, even when logic says to work for the future. Mallorcans work fiercly to keep their culture, their language and their traditions alive — such a the merging of our Pagan and Christian beliefs with Sibil°la, the tradition of a virgin girl singing an apocalyptic song during Christmas mass.

On the 24th night of December, in the oldest churches of Palma and of Mallorca Island (and in Sardinia in Alghero, conquered by the Catalans in the past), the Sibil°la sings a song about the end of the world, a sword held in her hands. She sings before the mass of the holy night, a tradition that dates back a thousand years.

The Sibil°la (or Sibyl) is a prophetess of the apocalypse, a character of classic mythology who was introduced to and then adapted to Christianity, thanks to the similarity between this prophecy and the biblical concept of the final judgment. The text of the song has been interpreted in various ways among the masses of France, Italy, Portugal and Spain. And here in Mallorca, since the Arab reconquest, this tradition has remained.

In the 16th century, the Pope with the Trento Conciliate forbade the Sibil°la tradition. All of Europe halted the tradition, except for Mallorca, where it has carried on until today. Maybe it’s because we live a bit isolated, or because we are strong willed, or because of that Medusa wizadry, but we are a unique place in the world (along with Alghero, Sardinia), where this beautiful tradition is still alive.

In 2010, the song was declared a UNESCO intangible heritage tradition and, since then, everyone wants to hear it. Today, it is one of our most important folkloric and religious traditions remaining from medieval Europe. Local people maintain a sense of responsibility that they are carrying on the practice of something important. Now, in Barcelona’s and Valencia’s cathedrals, the Sibil°la sings again, and we are sure this tradition will once again take place in other cities.

The girl arrives at the altar, wearing a prophetess’ dress with Oriental ornaments, and carrying a sword in her hands. She sings in a sweet, high voice a song of the apocalypse, prophesying the arrival of the Son of God. Her voice goes up and down with deep note changes. The pipe organ plays an abysmal melody. The church is filled with people and decorated with candles and typical Christmas decorations. The words are these:

The fervor of the chant is softened in the last verse: Oh Humil Verge (Oh, Humble Mary)…

The sound touches your soul — your community soul. Even if you can’t understand the words, even if you are not Catholic, the song is touching and the atmosphere is beautiful.

Seeing the Sibil°la is a unique opportunity to carry on a thousand-year-old tradition. If you are in Mallorca during the Christmas season, be sure to add it to your list of things to experience.

As the Sibil°la performance takes place at Christmas mass, it is important to remain respectful: remain silent and turn off thoses mobile phones. Remember that Christmas is the most important celebration of the year for Catholics, and you are a guest in their church. Few travellers know about this tradition, so to join in is a unique chance to discover the real soul of Mallorca.

The Sibil°la makes her exit | Video by Mallorca Urban Adventures

And one final #localsknow tip: The mass times for all of Mallorca and the Palma city centre can be found on the Consell de Mallorca website, so you can look up when you can hear the Sibil°la sing. The site is in Catalan and Spanish because this is truly a local tradition, and locals don’t want it to become a tourist attraction — just a special chance to honour a piece of our history.

These are the words in Catalan of this touching song (there are many versions, but this is the most typical):

El jorn del judici    The day of judgment
parrà qui haurà fet servici.    Will pay who has made good service.
Jesucrist, Rei universal,    Jesus Christ, King of the universe,
home i ver Déu eternal    Man and real Eternal God
del cel vindrà per a jutjar    will come from heaven to judge us
i a cada u lo just darà.    And He will give to each one the just thing.
Gran foc del cel davallarà;    A big fire from the sky will start;
mar, fonts i rius, tot cremarà.    Seas, springs and rivers will burn.
Los peixos donaran grans crits    Fish will scream strongly
Perdent los naturals delits.    Loosing their sin.
Ans del Judici l’Anticrist vindrà    At this time, the Antichrist will come
i tot lo món turment darà,    and he will harass everybody,
i se farà com Déu servir    he will be served by everybody like God
i qui no el crega farà morir.    And who doesn’t believe in him, he will kill.
Lo seu regnat serà molt breu;    His kingdom will be very short;
en aquell temps sots poder seu    Under his power
moriran màrtirs tots a un lloc    Martyrs will die together
aquells dos sants, Elíes i Enoc.    Those two saints, Elijah and Enoch.
Lo sol perdrà la claredat    The sun will lose brightness
mostrant-se fosc i entelat,    showing up dark and clouded,
la lluna no darà claror    the moon will not shine
i tot lo món serà tristor.    and all the world will be sadness.
Als mals dirà molt agrament:    To the bad people He will say bitterly:
Anau, maleïts, en el turment!    Go, damned in torment!
anau, anau al foc etern    Go, go at the eternal fire
amb vostro príncep de l’infern.    with your prince of the hell.
Als bons dirà: Fills meus veniu!    To good people He will say: Come, my children!
benaventurats posseïu    blessed possess
el regne que està aparellat    the kingdom is matched
des de que el món va ser creat.    since the world was created.
Oh humil Verge! Vos qui heu parit    Oh, Humble Mary! You who have given birth
Jesús Infant aquesta nit,    Infant Jesus tonight,
a vostro Fill vullau pregar    pray to your child
que de lo infern nos vulla guardar.    that from the hell He want to save us.
El jorn del judici    The day of judgment
parrà qui haurà fet servici.    for who will have made service.