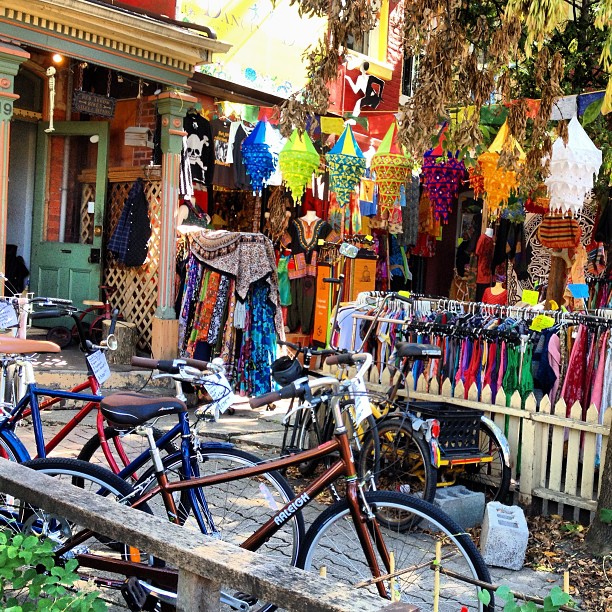 I only moved to Kensington Market recently, but it feels like I’ve lived there for ages. I’ve always been going to the neighbourhood, but living there takes things to a whole new level.

Kensington Market is one of Toronto’s most cherished and multi-faceted neighbourhoods. It’s historical, cultural, diverse, laid-back, and always popular. It’s full of local businesses (Starbucks was vehemently opposed), and between the bars, coffee shops, grocers, restaurants, parks, art shops, vintage shops, street art, and festivals, it’s next to impossible to get bored in Kensington Market, despite the fact that it spans only a few square blocks.

Toronto Urban Adventures actually runs a tour of Kensington Market (and Chinatown), so I don’t want to give anything away that you learn on the tour, but I do want to share some of my favourite places and things about my neighbourhood. Besides, Kensington is all about the experience, so even if I did tell you everything you learn on the tour, it still wouldn’t ruin it!

One of the first things we did when we moved to the neighbourhood was do a bar crawl. I’ve gone out to several of Kensington’s bars before, but one of the things that’s so appealing about the neighbourhood is the density of bars and restaurants. You can literally hop from one to another, and they’ve all got a different feel and different things to love. There are so many bars, but my favourites are The Handlebar, for its atmosphere, good prices, nice little patio, and cool events; Thirsty & Miserable, because this tiny dive bar has a truly fantastic beer selection that’s unique, local, global, discerning, and ever-changing; Ronnie’s Local 069 has a very chill (and often busy) patio, and they allow you to bring food over from The Grilled Cheese across the street (bonus!); Poetry Jazz Cafe has fantastic jazz, is very welcoming and relaxed, and has a great hidden patio in the back; and then there’s Cold Tea. It’s a ‘hidden’ bar, tucked down the hall of Kensington Mall, designated only by a red light above a grey door, and they’ve got a great bar, cheap-ish beer (cocktails aren’t so cheap), fantastic music and DJs, and dim sum! Open super late, too, and the patio is fun in the summer.

I also love a good independent coffee shop, and Kensington is full of those. Newest on the block is Fika, which has the best back patio I’ve ever seen. It’s actually a backyard, and has a deck, comfy chairs, a hammock, and a lawn with picnic blankets available. The ice cream sandwiches are fantastic, and their iced coffee is uniquely divine. Other neighbourhood faves include Jimmy’s second location, where I get a lot of productive work time in; Moonbean, one of the original Kensington coffee shops; i deal, which is super cosy on those cold, rainy days; and Cafe Pamenar, which also has live music later in the day.

The other thing Kensington is known as is a haven for vintage clothing. Courage My Love is the first vintage store most people go to in Toronto, but it is by no means the only one. The neighbourhood is full of vintage shops, as with several other neighbourhoods in the city, and you can bet that whatever it is you’re looking for (or aren’t), you can find somewhere in Kensington.

From May to October, the last Sunday of the month is Pedestrian Sunday. The streets shut down and the whole neighbourhood becomes one big block party, with street performers, food vendors, and all sorts of other happenings. Even on regular days, pedestrians are the ones in charge in Kensington, but Pedestrian Sundays takes things to a whole other level. Kensington is also always full of community art projects, great little retail shops (I’m addicted to the posters at Kid Icarus), and wicked Mexican / Latin American food (get the tacos el pastor at El Trompo). Oh, and if you want cheese, pay a visit to the guys at Cheese Magic and pick up some Grey Owl. Mmmmmmmm.

Can you tell I love my neighbourhood?!