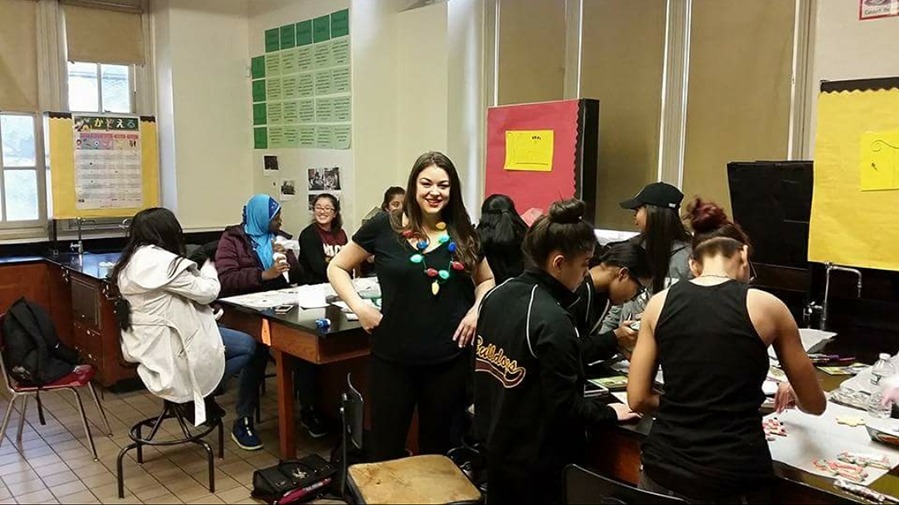 My job as a guide with Urban Adventures is such a beautiful part of my life, but living in one of the most expensive cities in the world requires that it is not my only means of employment. I’m so lucky and honoured to have the opportunity to work with a non-profit organisation in New York City called The Leadership Program. I am employed as a women’s empowerment trainer for high schools in the Bronx. I primarily lead sessions in Title 1 schools — schools with high percentages of low-income families.

I begin each session very simply with an exercise called “Rose and Thorn.” We sit in a circle and and each person shares their personal rose (a thing that is great about their life that week) and their personal thorn (a thing that is difficult about their life that week). It became quickly evident that my thorns did not compare in severity to the thorns of my students. I was shocked by the simultaneous pain and bravery of my students when we discovered that 75% of them were victims of sexual abuse.

One day, only three months into my training career, I engaged in a Rose and Thorn circle that stunned me into silence. One of my students (let’s call her ‘Clara’) shared a story so harrowing I was lost for words. Clara is a first-generation American whose parents had emigrated from the Dominican Republic. Clara’s childhood had been a difficult one. When she was seven years old, her parents, who were suffering from addictions in a new country, sent Clara back to the Dominican Republic to live with her aunt.

Unfortunately, her aunt did not treat her with the kindness and care she needed. Instead, Clara’s aunt sold her virginity to a man who repeatedly raped Clara over the course of three days. Clara managed to escape this nightmare by running away to the local authorities who arrested and prosecuted both her aunt and her rapist for their crimes.

Without another family member to live with in the Dominican Republic, Clara was sent back to the Bronx. She has been living with her parents and two brothers in a two-bedroom, one-bathroom apartment for the last eight years. As she matured and became a woman, sharing such close quarters became increasingly problematic. But even more problematic was her acknowledgement of her own homosexuality. A thing, she says, that her parents find disgusting and abominable. Clara started these stories and truths with the group without emotion or affectation, like distant memories that were hard to conjure or universal and commonplace anecdotes. Her stoicism broke my heart.

A year later, during a routine Rose and Thorn circle, I became aware that my normally unaffected Clara needed to get something off her chest. In an uncharacteristic rush of emotion, Clara shared the details of an encounter she had had with her father the night before. When she arrived home after school, her father was drunk, and attempted to rape her, citing his need to ‘correct’ her homosexuality.

Luckily, her older brother came home as Clara struggled away from her father, and rescued Clara from a truly terrible situation. When her brother called the police, they came and took her father to the local precinct. Without evidence, it became a he-said/she-said situation, and Clara’s father was booked on a minor misdemeanour. Her mother bailed her father out of jail the very next morning.

I don’t share this story because I want the reader to feel sorry for Clara. She doesn’t feel sorry for herself. I share her story because I believe it is time to amplify the voices of those who identify as female all over the world. The time for silence is over. In my two years of leadership training, it is evident that Clara’s story is not unique and that telling our stories is important and can lead to change.

In our sessions we discuss things that are unique about the female experience. We talk about our relationship to our bodies, and the effects of society and fashion on our self-esteem. We talk about love and difficult relationships in a time when a vast majority of date-rape perpetrators will not be prosecuted or go to prison. We discuss career goals in a time when powerful men abuse their influence in the workplace.

In my leadership role, I often feel insufficient and inadequate. Surely, there is someone wiser than me, smarter than me, and more compassionate than me to guide these young women on their life’s journey. However, my students reveal to me more and more everyday by their own example, that I am worthy, I am strong, and together we can overcome injustices by revealing our truths.

I am grateful every day for the lessons my students teach me and privileged to work for companies that amplify the voices of women.