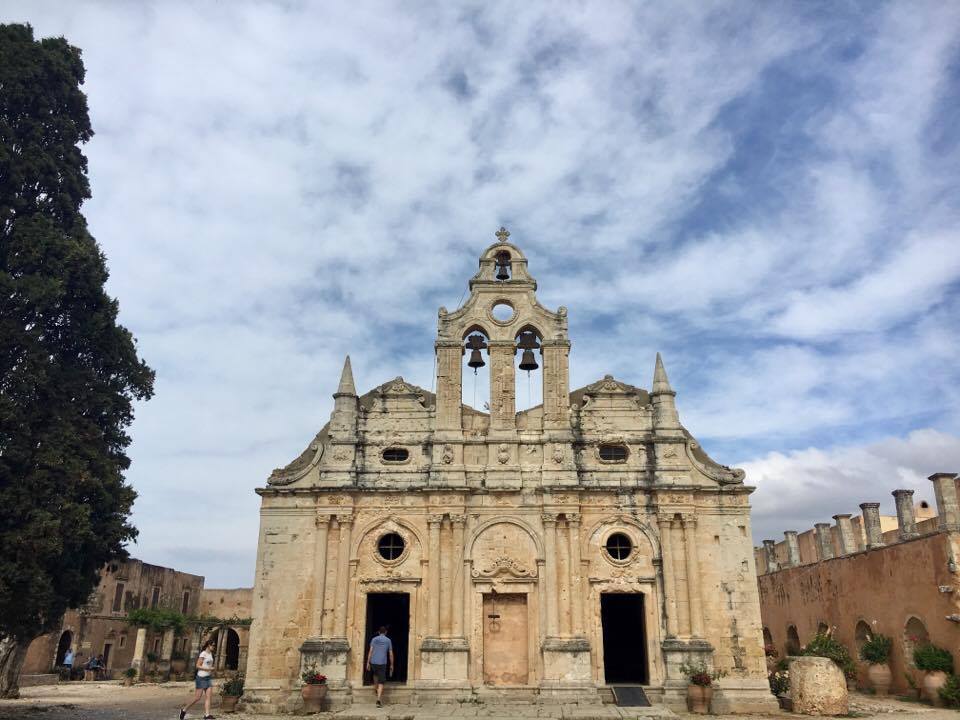 Conquering Rethymnon, from seaside to countryside

One of my most fascinating days in Crete was when my family and I toured Rethymnon with a local guide. We walked through the city (and out of the city), learning the region’s history and secrets, and hearing incredible stories about the island.

One aspect of Crete that visitors often overlook is its history; they are too busy going to the most stunning beaches on the Mediterranean. Because yes, the beaches in Crete are impressive. However, the island is so rich in history and tradition that devoting your days only to the seaside is a loss.

Our first visit was to one of the most important churches in Rethymnon, immediately outside the old town, called the Church of the Four Martyrs (also Tesseris Martyres). The church has three aisles and features impressive frescoes and icons. Its magnificence and serenity easily reminded me of much older sanctuaries. 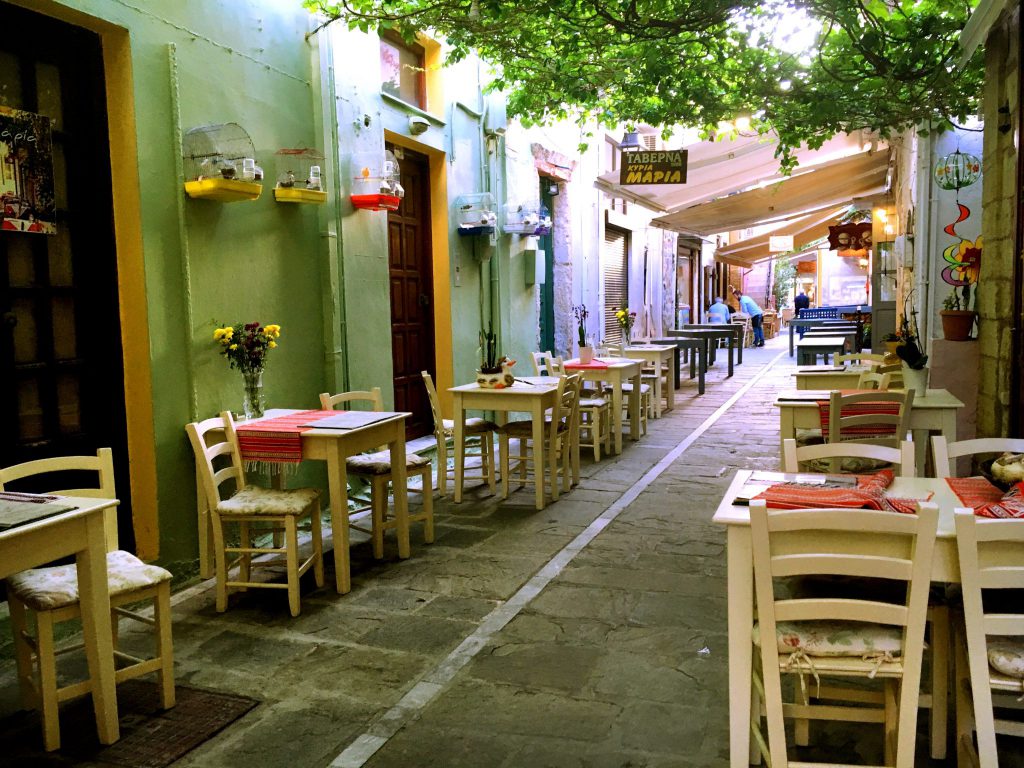 Afterwards, we headed for a coffee — but not just any coffee break. Instead, we experienced one of the most deeply rooted traditions throughout Greece, the kafenion.

The Greek café, known as the kafenion, is an important piece of Greece’s everyday life, a magical place that captures the local flavour of the country and its people, who will spend hours over a cup of dark brew, engaged in friendly conversation with their neighbours. Kafenia are part of the Greek way of living.

These cafés are normally frequented by men, who will drink Greek coffee, ouzo or raki while having animated chats with friends or playing backgammon (tavli). Although women are no longer officially banned from them, these places remain mostly populated by men.

Don’t worry about a thing

Our walk continued until we bumped into another staple of Greek tradition: a tiny shop selling ‘worry beads.’ It was the kind of shop that wouldn’t normally attract the attention of tourists, but being ushered by locals has its advantages.

Komboloi is something you have probably noticed if you’ve already been to Greece. These are strings of beads than men usually fiddle with while they are sitting at a café or even while walking. The beads are used as a way to relax or to cope with anxiety. Despite their current secular use, their origin is religious and dates a long way back.

Rethymnon, like all of the island, has been marked by endless years of Ottoman domination. On Crete, Ottoman invasions were a threat during the last years of Venetian rule.

The Ottomans conquered Rethymno in 1646, and after a long series of battles, bloody massacres and struggle, Cretans expelled the Ottoman forces in 1898. That’s why today it’s easy to see remnants of Venetian architecture, inspired by the Italian Renaissance but mixed with Ottoman style. This eclectic face of the city can be found everywhere: mosques share the landscape with fountains, Venetian lions and cobblestoned passages.

We were even lucky enough to visit a private traditional Venetian house. Wood and local limestone provided shade and a faint but pleasant sense of humidity. A small square patio decorated with plants in the middle of the courtyard gave contrast to the heat out on the streets.

Music is a very ancient craft in Greece; it can be traced back to Pythagoras and his philosophical system of harmony and sequence. According to the philosopher, each of the seven planets produces a particular note related to its distance from the Earth. Tradition says that the sound produced is so exquisite that our ears are unable to hear it. We learned a bit about Cretan musical heritage with a stop at an instrument shop. Here we were introduced to the Minoan lyra, the Cretan lyra, the mandolin and the bouzouki, and also got to see some very old guitars and an askomandoura (a Greek folk instrument similar to a Scottish bagpipe).

Pastry with a story 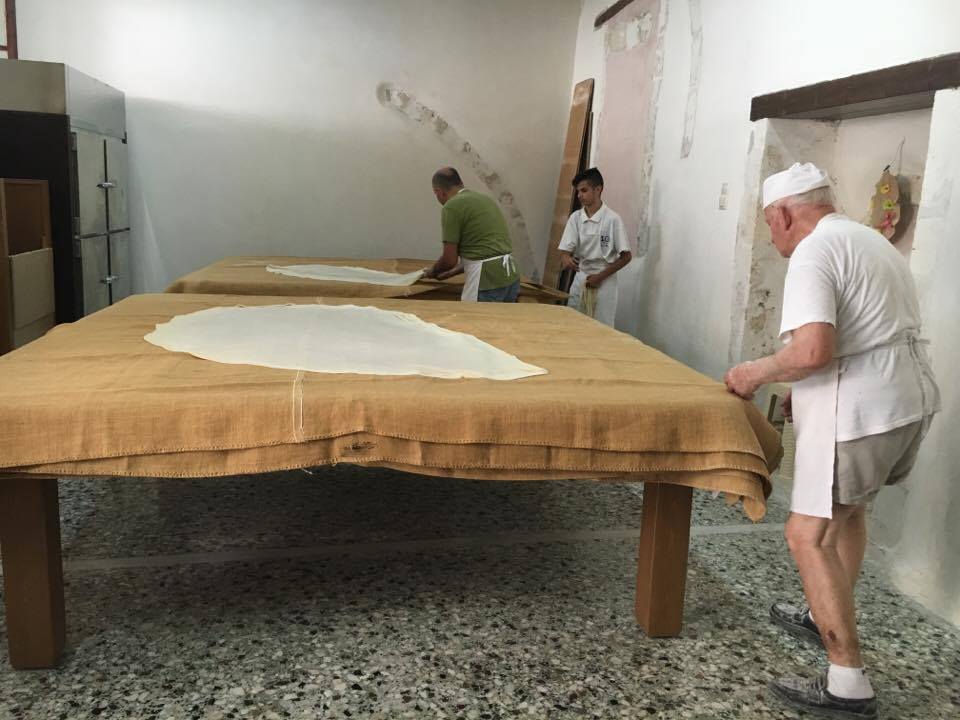 Our last visit in town was the one I’d been waiting for. I had previously come across an article about Rethymnon’s last traditional phyllo master. Inside a Venetian house in the old town, Giorgos Hatziparaschos has been making ultra-thin phyllo pastry by hand since the Second World War.

Thousands have visited his workshop to buy his well-known phyllo and watch both him and his wife, Katerina, at work, their dexterous hands working the dough over two huge tables. Giorgos started working as an apprentice when he was 12 years old and went on to make phyllo all his life. And now, against the unstoppable arrival of mass production, Giorgos and his family have continued the tradition of homemade and handmade values, producing one of the most beloved treasures of Rethymnon.

Mountains and a monastery

The Arkadi Monastery is place that strikes you as soon as you see it, not only for its immense beauty but also its sense of utter peace. But this beautiful building is deeply marked by the struggles of the local Cretan people for freedom. We headed out of Rethymnon town and into the nearby mountains for the second half of our full-day adventure.

The tragic and beautiful Arkadi Monastery | Photo by Gabi Ancarola

The Holocaust of Arkadi Monastery was a tragic symbol of Cretans’ struggle for independence. Hundreds of women and children took refuge inside the building during the Cretan revolt against Ottoman rule in 1866. Refusing the surrender, they blew up the stores of gunpowder inside the monastery, taking hundreds of Ottoman soldiers with them to the grave. After years of struggles, the Ottoman forces were expelled in 1898 and the Cretan Republic was declared independent. (Crete joined Greece in 1913.) 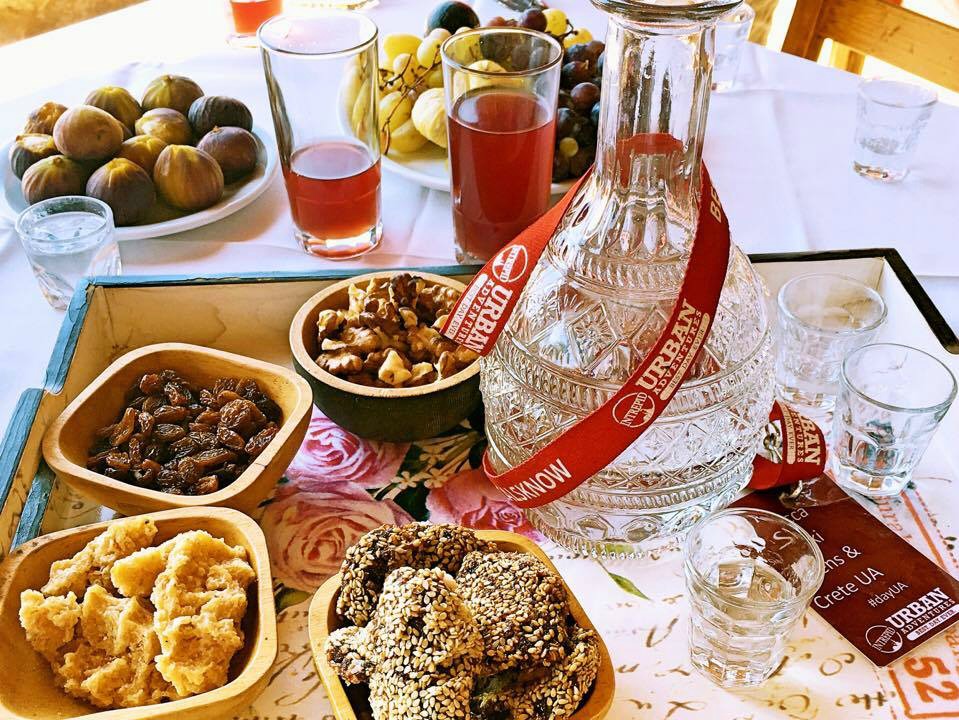 Our adventure continued into the heart of Crete’s rural life. Here, we learned to bake bread and took a walk to explore the surroundings and search for Cretan herbs, which make up the island’s extremely healthy diet. We enjoyed a rich lunch of dishes boasting the most amazing local delicacies.

A walk to the old town of Thronos allowed us to discover old churches and local traditions. We even bumped into a little house where local were distilling raki, the island’s favourite drink.

The day spent in Rethymnon was one of the most delightful days in Crete. It was a gift to our kids and an incredible experience for the family. Our day was an experience that most tourists on the island are completely unaware of.