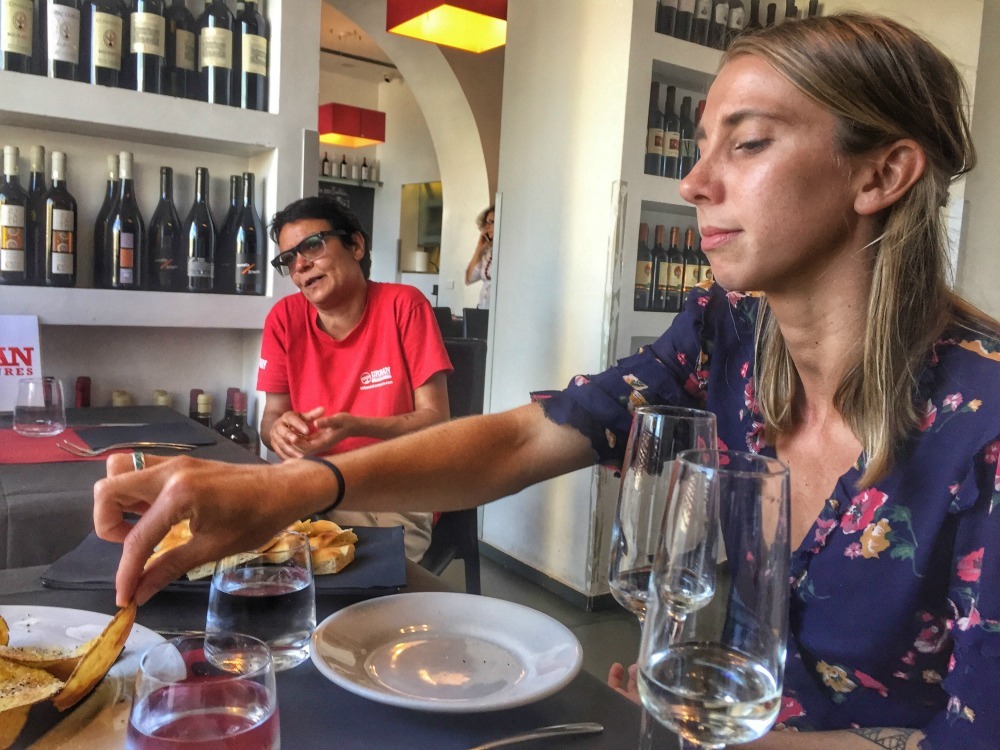 This Roman wine tasting pairs local wines with a good cause

It was a typically hot June evening in Rome as our taxi pulled up alongside the imposing ruins of the Trajan Forum, one of the last forums built in ancient Rome. Soaked in late afternoon sunlight, the ruins were absolutely beaming and I couldn’t think of a more spectacular location for a Roman wine tasting.

Elisabetta, our Rome Urban Adventures guide, came to greet me, my fiancé and one of our friends at the Forum, and swiftly escorted us to the enoteca (restaurant and wine shop) where the tasting was to be hosted. It was an intimate space, with smells of pecorino and fresh focaccia filling the room.

As self-proclaimed ‘winos,’ my fiancé and I have done a lot of wine tastings, in a variety of settings around the world. But this one was different. This one was about giving back to a community that has given so much to its visitors for so many decades.

So aptly named after the Latin phrase meaning, “In wine, truth,” the ‘In Vino Veritas’ wine tasting tour is unique in that the restaurant that hosts it is run by graduates from the Institute of Hospitality in Trastevere who have a special partnership with a co-operative called Men at Work. Men at Work helps to support the rehabilitation of prisoners from Rome’s Rebibbia prison, and prepares them for a successful re-integration back into society.

Prisoners’ participation in the program is twofold: some are invited to help maintain the one-hectare kitchen garden that is located within the prison, which supplies several local restaurants and businesses in Rome with fresh seasonal produce. Other prisoners actually come to the restaurant each day to work in the kitchen, learning trade skills and developing techniques that will be critical in successfully finding work after their release. We were even delighted to hear that the individual responsible for much of the delicious, high-quality food we were tasting (like the homemade focaccia — AMAZING!) was a participant in the restaurant’s Rebibbia program.

We were seated in a brightly lit corner of the restaurant, opposite a wall full of shelves that held hundreds of bottles of delicious, locally sourced wines. Martina, the delightful young woman who led us through the tasting, was incredibly knowledgeable about everything we had, from choosing an impeccable local prosecco, to explaining what makes their pecorino cheese so particularly indulgent.

Martina frequently works with the prisoners in the restaurant, and she is passionate about sharing the story behind the tasting and why it’s so important to leverage Rome’s tourism industry to give back to the community. Throughout the evening, it became evident to us how necessary programs like this are, not only in Rome, but worldwide in helping prisoners get back to normal life, and teaching them skills that will truly provide a fresh start for them in the community.

But the local support on this tour goes even deeper than the prison program. It goes without saying that Italian wine tastings are abundant in Rome, but rarely do those individuals get to actually taste local-to-Rome product. Rome is not well-known as a wine-producing region, which is what made this tasting even more incredible, because each wine was locally produced, and many of them were organic. I am certain I would have never been able to try these wines anywhere else in Rome. Elisabetta, who is born and raised in Rome, even commented that one of the wines we tasted was produced at a vineyard located just a few kilometres from where she grew up, in the hillside surrounding the city. It takes some serious insider knowledge to find a wine like that.

Beyond just the wine, the food — incredible homemade focaccia (have I mentioned the focaccia?) and bruschetta, and cured meats and cheeses with jams and honey — absolutely blew us away. And, with my fiancé being a chef, that’s typically fairly hard to do.

Everything we ate was exemplary of Italy’s ‘Slow Food’ and ‘0-Kilometre’ movements, which signifies local, low-impact primary ingredients like cured meats, cheeses, grains and honeys and jams.

The In Veritas Vino wine tasting is a beautiful example of enjoying everything Rome has to offer, while also offering something back to Rome. In all of our travels, tastings and tours, there are always times when we wish to go ‘deeper’ in connecting with the community we are visiting. All of these beautiful places have more to them than what we, as travellers, can see on the surface, and this wine tasting experience truly allowed us to become part of the Roman community like we had never known it before.