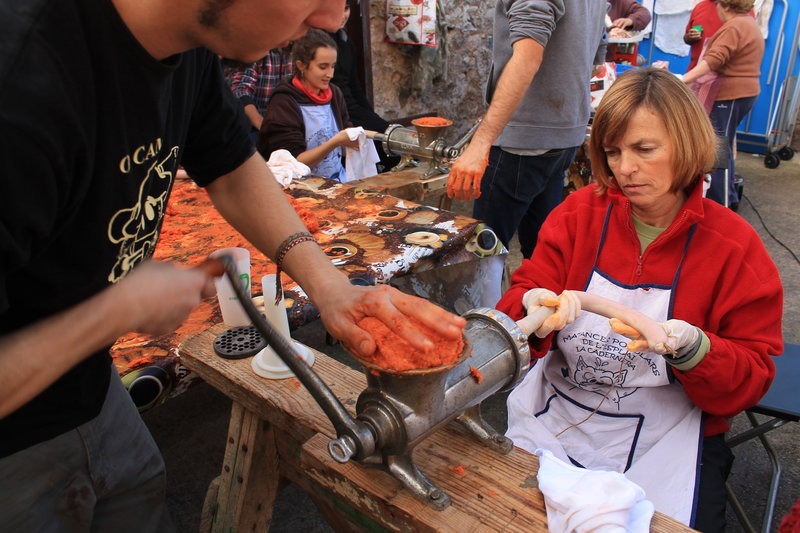 Mallorca has a lot of gastronomy to offer — and all of it is excellent! Have you ever tasted a delicious sobrassada (the typical red sausage from Mallorca)? Or maybe a pa amb oli (bread with olive oil) with butifarró? What about a tasty camaiot? Or the frit de Matances?

All these dishes have one common ingredent: pork. In Mallorca, and in Spain in general, we eat a lot of pork. There is a historic reason for this; after the Christian conquest, people were forced to convert to Christianity. Those who had converted ate a lot of pork to show to others they had become Christians. Although it no longer carries the relgious message, our culinary tradition has made pork a highlight. We use pork and pork fat everywhere, and everything is delicious!

Adding the paprika to the sobrassada mixture

There is one special time of year when families and villagers gather together to share an important task relating to pork: this is Matances Day. Matances (which literally means “the slaughters”) is the sacrifice of an adult pig to prepare all the sausages, meat and fat for the following year. Normally, the Matances happen between December and January (during this period there are about 1,500 Matances on the island). As it’s cold at this time of year, the meat doesn’t perish, making it the perfect weather for transforming the meat into delicious sausages like sobrassada, butifarrò, camaiot and many others.

But there is a lot more behind this day and this sacrifice. Until 50 years ago, Mallorcans lived in an agricultural-based economy. At that time, the Matances were the pivotal day when our families ensured the provision of protein for the whole year, driving away fear of famine. But the Matances are not just about dietary needs. The Matances are our identity, our magic ritual, our connection to our roots, to our land, to our island that feed us. The Matances ritual (and our excellent sobrassada), is the real soul of Mallorca and is connected with all our culture: old legends, local dishes, traditional songs (glosses) and Mallorcan expressions.

Everyone gets their hands into the mixing action!

The Matances involves the entire family and community — the more, the merrier! We all gather together to work the pig, eat, chat and laugh while children play. I love this day because it is an important social event where we share our happiness as we prepare delicious sausages for the winter.

In my village, there is a festival in which we all gather at a youth house. Volunteers organise the day and coordinate everything, but the Matances process is managed by a few elderly ladies who teach everyone how to cut, cook, season, stuff and dry the meat. This way, the young can learn from the older generation, and keep the tradition alive. This is one of the reasons why Mallorca holds such a special place in my heart. I am proud to see that people here love their roots, respect their traditions and know how to make typical products.

The ‘ugly’ part of the Matances, for me, is seeing the slaughterer do his job. It is sad, but of course also part of the process. In the past, this was an important family event when people could eat pork; that was a luxury and a privilege. But nowadays, we are so used to eating meat that we often forget about the killing of animals. So, for me, the Matances helps us to reconnect with the land, the sacrifice, the recognition that it is not a pleasant job, and the understanding that we have to do it with respect. The respect is for the animal, who doesn’t have to suffer, and with the land, because we don’t throw away anything from the sacrifice (the innards, the fat, the meat, the skin — everything is used).

If you don’t want to see the actual slaughter, you can skip it; they kill the pig in the early morning, around 6:30am. By 10am the animal is already chopped and prepped. There will be a breakfast for all the volunteers with some pork from the animal, along with vegetables and bread, to give us energy to start the day.

After breakfast, we are ready to start. The noble parts of the animal (loins, sirloins, feathers, cheekbones, etc.) are separated from the rest. The other meat, that which is not so good, is seasoned to make the delicious sobrassadas, butifarros and camaiots. To do so, we divide the fatty meat, the bloody meat and the lean meat, and grind it up. It’s hard work, so we trade the grinding task with each other when we start to get tired.

It’s tough work all day long, but the atmosphere is also fun and joyful. Of course, we’re happy because we are all together and are going to eat very well, but more than that, we’re happy because the Matances is a centuries-old tradition and we are proud to celebrate it. There is an understanding that we’re doing something important, and this is a real privilege. Especially for the younger generation, who are used to eating food that comes from the supermarket and are completely disconnected from the land.

Simultaneously, we’ll cook up a delicious frit de Matances, which is a fried dish that we eat at this time year. The classic ingredients are garlic, potatoes, peppers, pork liver, bacon, lean pork and whatever you have in the garden. The dish is seasoned with wild fennel and bay leaves.

In the meantime, production goes on. This year, I was in charge of preparing the meat that would go into the sobrassada sausages. To make the filling, we use the best ground meat with some pork fat. It’s all minced and placed into large clay basins, then seasoned with salt, pepper and the special red ingredient: paprika. All these spices help to dry and preserve the meat.

The mixture is worked by hand, and according to tradition, only specific people can mix the sobrassada: men who hadn’t had sex the day before, or women on their period. To purify the sacrifice of the pig, people had to be “pure.”

The family that makes sausage together eats together! | Photo by Mallorca Urban Adventures

Once the mix is ready, we fill the intestines with the sobrassada mixture and the intestines are tied at both ends. Depending on the type of intestines filled, there will be different kinds of sobrassada (from thinner to thicker we have longaniza, sobrassada, semi rizada, rizada, culana, poltrù, bufeta and bisbe). Once they’re ready, we hang them in a dry and cool place to cure for several months. The curation time is shorter for thinner sobrassadas and longer for thicker ones. For example, after one month, we can eat the longaniza; after nine months, the huge bisbe is ready.

Camaiot is another typical sausage of the Matances (camot or varía negra). I love it! This cooked black sausage is a mix of ground lean and bloody meat mixed with black pepper, pepper, anise and salt. Like in the sobrassada process, the mixture is worked by hand. But this time, we filled the back of a pig leg, the edges of which we had sewn by hand. The camaiots are cooked in boiling water for a few hours and then hung to dry for at least two months.

The delicious botifarrons are another treat. These little sausages make the most of the remaining parts of the pig, such as ears, blood, guts, snout, fat — it’s all ground and mixed with the remaining ground meat. We add delicious seasoning such as oregano, pine nuts, fennel seeds, salt, pepper and fresh blood. As with the camaiot and sobrassada, we mix it with our hands and then fill the intestines, this time in a string. Everything is boiled together and hung to dry.

After lunch, we sold all the sausages to the people of the village, to finance the activity of the youth house for the next year. We ended the day with a big dinner with sopes Mallorquines and a bonfire in the neighbourhood square.

In the past, this tradition ensured that families would have meat for the rest of the year. Today, the tradition keeps alive the love, passion and magic that connects us to our roots. These are the Matances for us.

Picture it: amazing hidden patios along narrow streets, panoramic views out to the sea, gothic cathedrals and sailing traditions. Sound like paradise? Sounds like Palma de Mallorca! Get a taste of Roman, Arab, and Catalan influences in this Mediterranean destination, where you’ll be forgiven for wanting to stay forever.