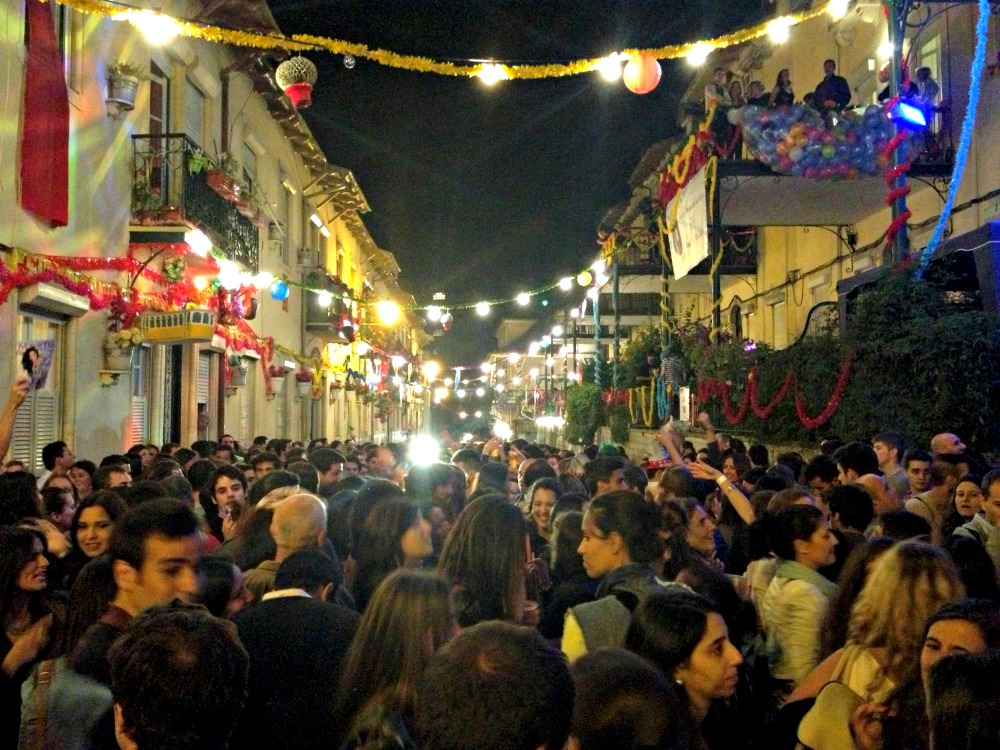 Thinking of visiting Lisbon? June is an excellent time to be in the city because of all the patron saint festivities that take place. All of the old districts in town are decorated with colourful flowers, paper ribbons, and lights. Little squares inside each district are transformed into concert venues that host open-air shows — some even turn into dance floors with DJs kicking the parties off! Neighbours often build improvised terraces and restaurants and sell beer and sangria. They serve everything from barbecued sardines to pork steaks to and chouriço (sausages). Every night, parties happen all across the city, but Thursday, Friday, and Saturday nights are when things really heat up. If you want to imagine what the atmosphere is like, think of all the food you can imagine, plus beer, sangria, and more beer!

Check out this video of Lisbon to get a taste of the city’s vibrant atmosphere in the summer! (If you don’t feel like watching the whole thing, start at the 9:00 minute mark to get a glimpse of the nightlife!)

Lisbon City Hall also organises daily cultural events and several concerts and the city hosts many Fado music festivals and other music and art exhibitions. For more information about events put on by the city, check out their official website.

The biggest events of the month happen at night on June 12th and 13th, which is a bank holiday in Lisbon and Saint Anthony Day. On the 12th, several weddings take place throughout the city. Many of these weddings are promoted by city hall. Couples sign up months in advance to have all of the costs sponsored by city hall, and to be one of the lucky couples to be married on Saint Anthony Day. Approximately 15 couples are chosen, and are all married at the same time on live television in Lisbon’s Old Cathedral.

Later in the day on the 12th, usually around 2pm, the “Marchas de Lisboa” takes place. Each district in the city competes in a parade on Lisbon’s main avenue, Liberdade. This parade is a stricter, scaled back version of Rio’s Carnaval. Contest participants are evaluated not only on their dances, lyrics, the band, and their voices, but also on their demonstration of respecting customs and traditions. Here’s a glimpse of what you can expect at the Marchas de Lisboa!

After 7pm, until approximately 6am on the 13th, Lisbon turns into a huge chaos of parties in every district! Most places are insane and are packed to the brim, so it can become quite hard to dance, get drinks, or even get to the toilet. Think twice before getting into a very large crowd in an old district like Alfama — you might not be getting out for a while!

As a local, I prefer to enjoy the parties on Friday and Saturday nights in June, and tend to avoid parties on the night of the 12th. Teenagers and university students often attend the parties on the 12th, so it all really depends on the atmosphere of the party you’re looking to check out, and who you want to party with!

Other places I’d recommend to visit are Vila Berta Graça, a district frequented by locals, and will probably be a nice break from all the tourist areas you’ll be visiting.

If you’re looking for a mix between regular nightlife and traditional festivities, check out the Bica district. Alfama, which I mentioned before, is the oldest district of Lisbon, and is probably the busiest area of the city. It’s a good area to check out if you want to get a feel of what the city is like when it comes alive!