Blog > A guide to summer festivals in Mallorca 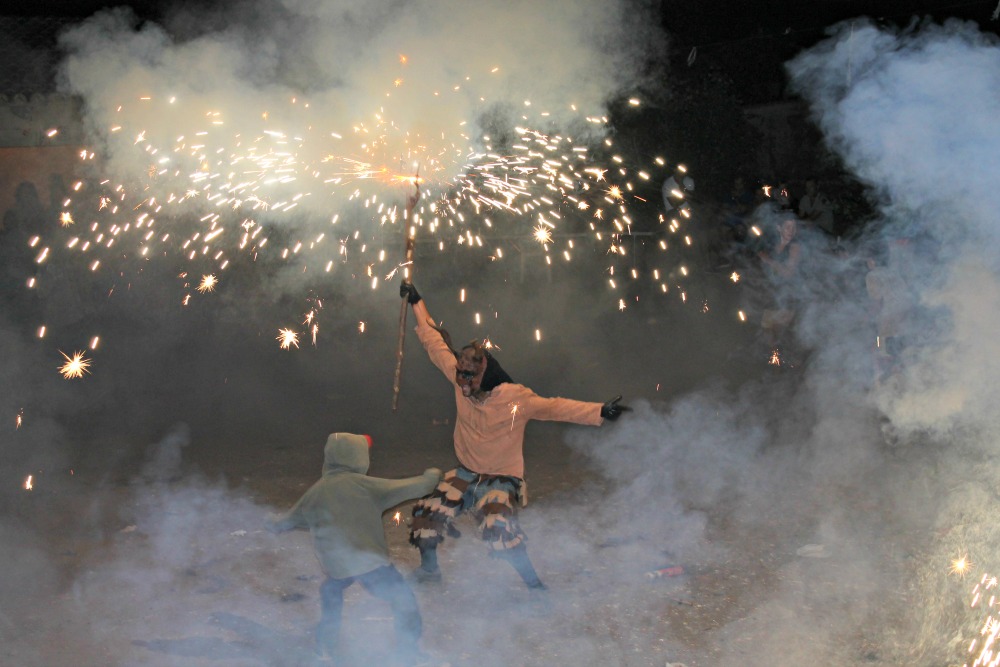 A guide to summer festivals in Mallorca

Mallorcans love summer. We’re always patiently waiting for summer to arrive. We think about summer in the autumn, in the winter, in the fall… it’s on our minds 24/7! It’s a well-known fact that as a society, Mallorcans are summer people. Not because it’s the best time to find work, or because we get to go to the beach — it’s because summer is when our villages come alive! Fiesta de Sa Vilanova 2015 — A devil firing up his firework-ladden stick before joining the crowd.

On late summer afternoons, when the hot temperatures take a break, our town squares and bars suddenly fill up with people who are out to enjoy the fresh air. Kids are on holiday, so children are up late and their parents are out and about, mingling with other families more than any other time of the year. Young men and women get together to plan their evenings out, and even retired people get out more to enjoy the lively atmosphere!

Summer is also the time when most villages host their festivals. Each village has a patron saint, and when that saint’s day arrives, the town hall organises a lot of cultural activities and parties around it. For that week, you’ll probably be the busiest you’ve ever been — even if you’re not part of a cultural association or planning committee. If you are part of an association, you’ll be even busier helping plan and organise events. You’ll also help to decorate your neighbourhood, take your children to the square to partake in events, and you might even go a little crazy! Everyone gets involved somehow — you can’t escape!

On the weekends, there are big concerts that take place at night (they usually start around 10pm — remember, we’re in Spain!) and young people from all over the island come to watch. You can always count on running into family and friends that you haven’t seen in a while, and the social aspect is probably the best part. Also, every village tends to have their festival on a different weekend, so you end up spending your summer partying every weekend in a different town or city! Es Firó — Pirates sailing into the beach harbour before they disembark.

On the last day of the festival, there are correfocs. This event is insane. Correfocs are when a group of people dress up as devils: they wear masks with horns, old clothes, and lots of weird things to complement their crazy outfits that range from actual fish nets to hanging goat skulls. One member of the group always plays the drums while the others run in the street with fireworks attached to sticks. Children try to dance with the devils, and the music, the costumes, and the red lights in the street, along with the dancing, really creates this image that will forever be stamped in your mind. It’s a moment that’s suggestive, and plays on both the emotions of fear and attraction. Be warned, though: the devils behave like devils, so prepare yourself because anything can happen!

One village does have a very particular party though, and it’s special for two reasons: first, it is the festival that marks the beginning of the summer season, and, second, it is a representation of Es Firó, a battle that took place in the 1500s between Turkish pirates and the people from Sóller. Sóller is a small village in the Serra de Tramuntana Mountains that suffered an attack by pirates. Es Firó — Battle on the beach between a pirate and a child from Sóller.

The pirates won the battle on the beach and managed to get to the centre of the town; however, while robbing and ransacking stores, a second battle took place. This battle forced Christians to charge into the square and they managed to capture the pirate captain.

The Es Firó festival takes place on the second Monday of May. During the festival people dress up as traditional Mallorcan peasants or as pirates, and both battles are re-enacted in the areas where they took place. Of course, every year, the Christians manage to win the last battle when all hope seems lost!

If you find yourself in Mallorca anytime soon, check out some of the festivals that are happening. (Please note that they are often celebrated during the closest weekend.)

This festival celebrates John the Baptist, with festivities taking place in most towns and cities. From Nit de Foc in Palma, to the dance of Saint John the Hairy in Sant Llorenc, there’s an activity out there for everybody!

The festival that takes place in Esporles during the last week of June is a period to celebrate St. Peter, the patron saint of the city. Lots of fun and family-friendly activities, sports competitions, arts and crafts, street markets, food stalls, and concerts take place, guaranteeing that you won’t run out of things to do!

Inca celebrates their patron saint’s day with a fiesta fit for a king. With activities suiting all ages, there is music, art exhibitions, street fairs, markets, dancing, and games. A new tradition that has popped up is called “Sa potada del Rei.” A traditional tale is recited that talks about the conquest of the island and a mark that was left in the town: a horse’s footprint.

S’Auborada is popularly known in Northern Mallorca as the Festival of the Moors and the Christians. The ancient Roman town of Pollentia was under siege by the Muslims, and several battles between both Muslims and Christians took place. Today’s celebrations commemorate the Christians resisting the attacks. Several songs about the battles are performed by children’s choirs, mass ritual feasts take place, and traditional dances are performed, too.

Celebrating St. Bartholomew the Apostle, this festival honours the saint with dance performances; music is courtesy of drums, flutes, and bagpipes. There is also a tradition that dates back 400 years, of dressing up like women and devils, depicting evil being overcome by good.

This festival that celebrates St. Augustine involves cossiers dancing in colourful clothes, performing ritual dances that date back to the 15th century. There is speculation over the meaning of the dances, but many say they were performed to ward off pests and insects, while others say the dances are a tribute to the female form, fertility, and the Earth. Foam parties, water games, musical performances, and other activities also take place in the town.