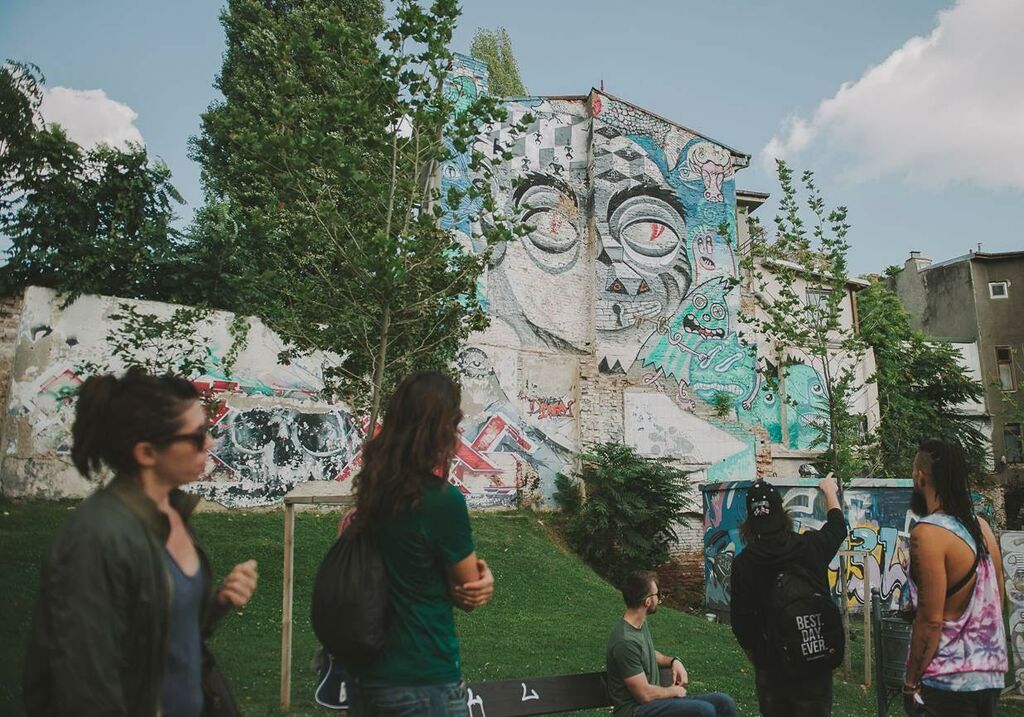 Visiting Bucharest can be an eye opening experience, as you begin to understand its dramatic transformation in recent years after decades of bleak, sometimes violent history. Since the collapse of Communism in 1989, the city has grown and developed horizontally and vertically beyond compare; with quirky architecture springing up in places that used to be dark and grey; thankfully our urban scenery no longer bears the load of communist stigma. Along with these fresh architectural enhancements, Bucharest has begun to open up and embrace the creative energy that was forced underground during the rule of Nicolae Ceausescu. Music festivals, art galleries, unusual yet spectacular museums, theatres, fashion and design shows have all taken over the cultural scene. Street art was one of the earliest forms of expression that arose after the Communist regime fell.

The street art scene in Bucharest 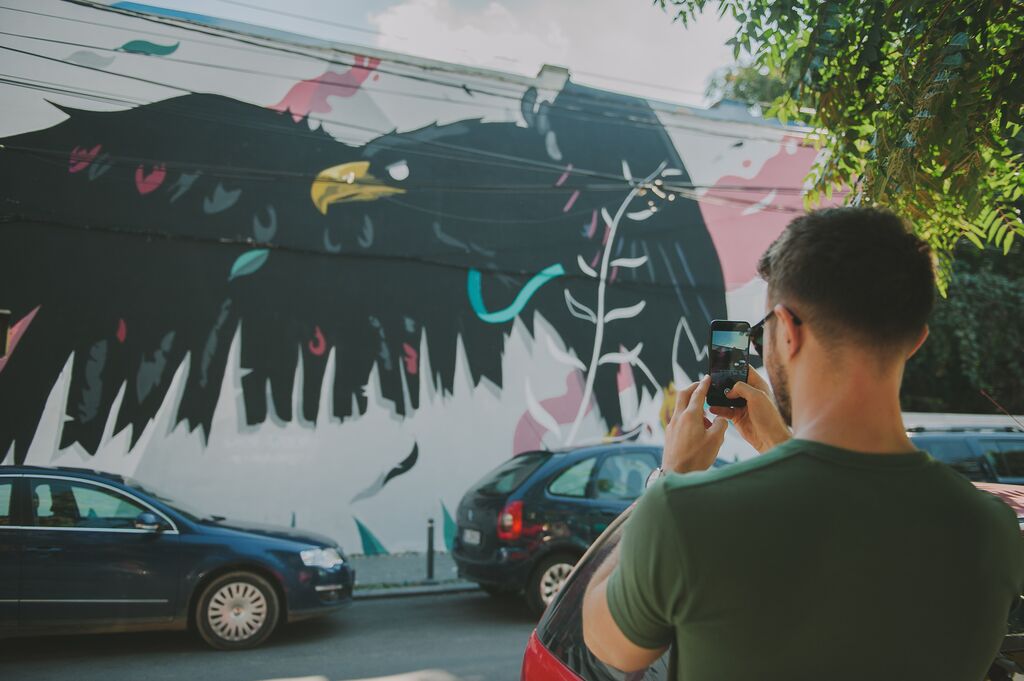 The first graffiti appeared in Bucharest shortly after the Revolution in 1989. The movement mainly adopted protest slogans aimed at the Communist regime and the semi chaos that the Romanian people were dealing with. Initially there were just a few scribblings on walls that could not really be classed as artistic because at the time, the Romanian graffiti pioneers did not know much about art in general, or what kind of spray and equipment was required to achieve quality in their work. They played it by ear: getting inspiration from American gangster movies, listening to hip-hop music, reading magazines and eventually they started to pick it up and learn by themselves through experimenting. And that was the very beginning of street art in Bucharest.

While some used to consider it vandalism, others begin to appreciate the creativity, engage with the messages expressed through the burgeoning street art scene and even encourage it. After all, street art is a reflection of the urban society that it resides in, with all the good  and bad that can come with that. The trouble is that people don’t always like what they see in the mirror, do they? Still, it has always been the artist’s mission and (sometimes unpleasant) duty to raise awareness of social and political concerns that their society may have. So they did. 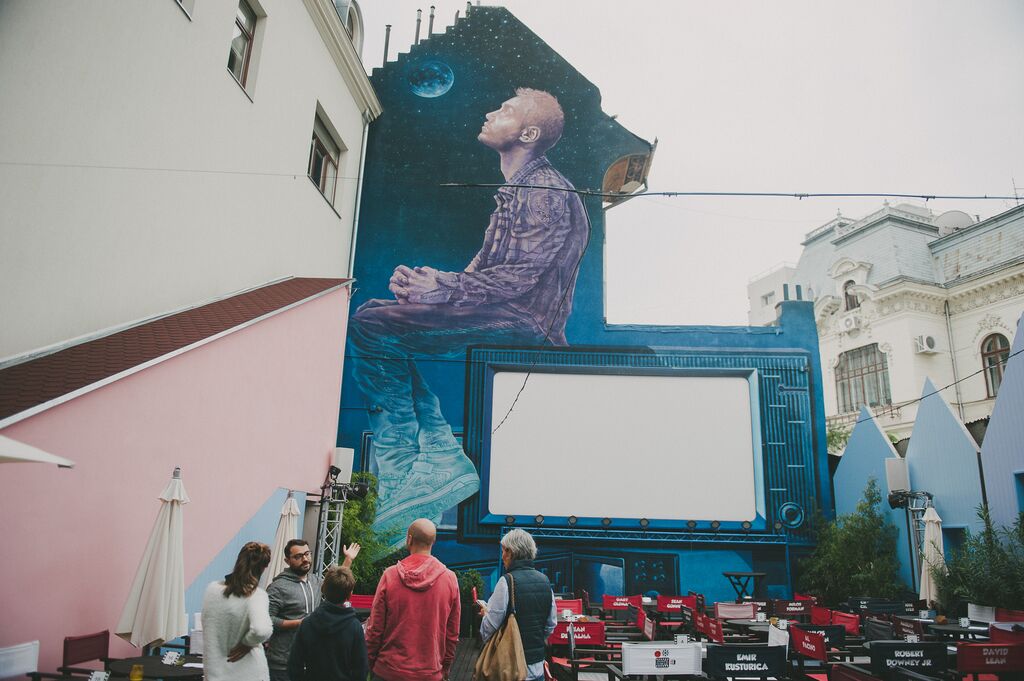 In recent years, Bucharest’s street art movement has grown in popularity and we at Bucharest Urban Adventures have been happy and proud to have been part of it. We work with local cultural association, Asociatia Coolturala ‘Noua ne pasa’ who work with local artists and communities on successful urban art projects. Our Alternative Explorer tour aims to support and raise awareness of the city’s urban art movement by providing a guided street art tour with a passionate local guide and street art enthusiast. Our sister company, Interesting Times Bureau also offers workshops and street art tours for local students in public and private schools in Bucharest.

Both Asociatia Coolturala ‘Noua ne pasa  and Bucharest Urban Adventures actively support the commissioning and creation of artworks in the city. A proportion of each tour sold is donated to Asociatia Coolturala ‘Noua ne pasa to help them continue their work. We also help them out by promoting their street art events and upcoming educational workshops, which aim to counter perceptions of urban art, which is so often associated with vandalism.

Here are a few successful examples of street art projects that we take much pride in, especially because they were so well received by the local community:

The Love Boat - Power of Two 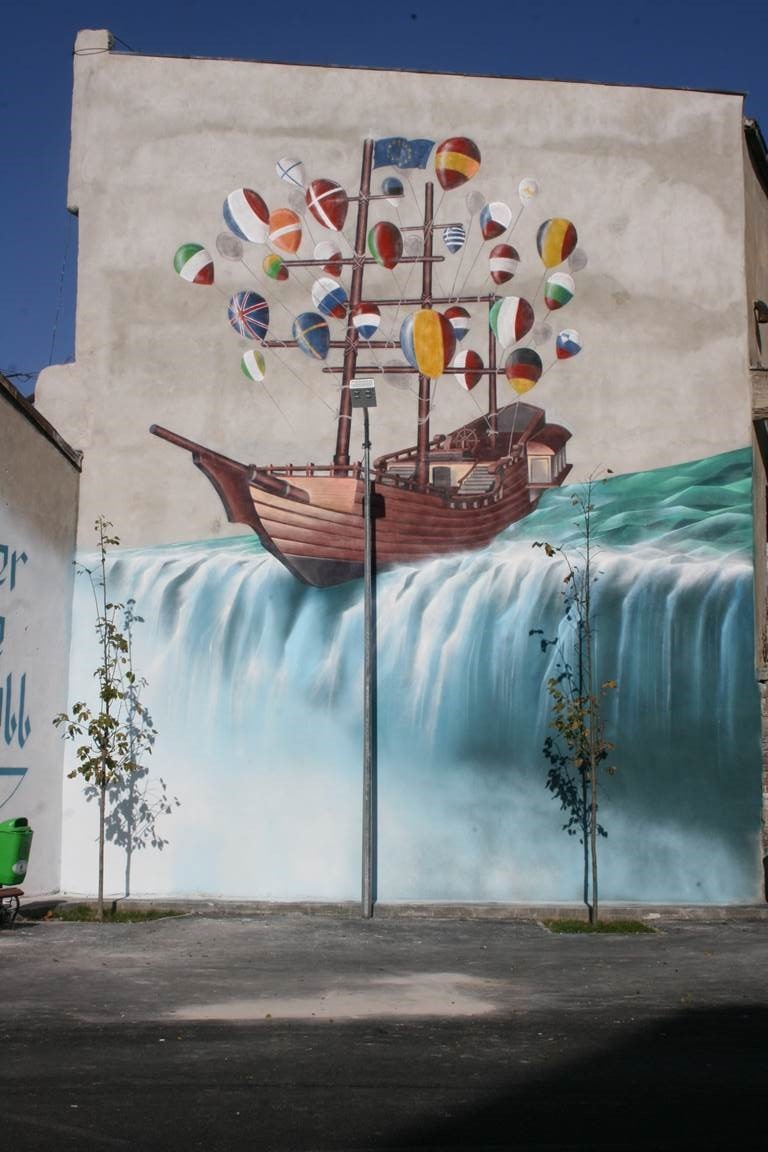 Suggestively called “The Power of Two” this mural aims to raise awareness of the ongoing refugee crisis in Europe and Romania. It was created in collaboration with Asociatia Civicus, Sincai High-School, the History department at Bucharest University and two political institutions: The European Commission and the Ministry of Foreign Affairs. The artwork was created by talented local artists Vlad Capitanu, LOST.OPTICS and SKIPSQ. 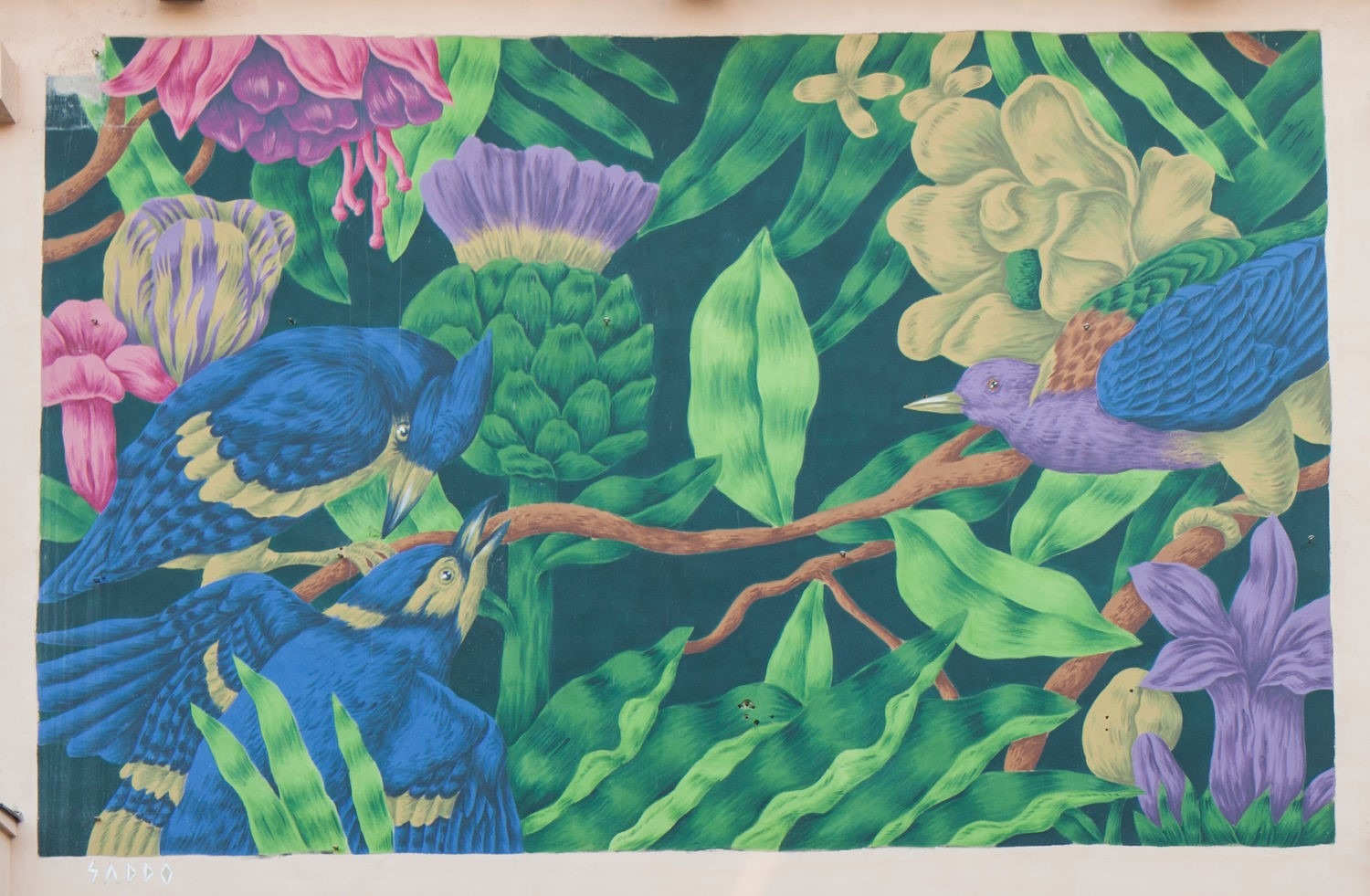 This stunning mural can be found at Bucharest University and is another one we visit on our Bucharest Alternative tour. | Photo Credit: Claudiu Popescu & Tudor Prisacariu

This urban intervention is one of the artworks commissioned by Urban Adventures as a result of our ongoing collaboration and support of Asociatia Coolturala ‘Noua ne pasa. We usually visit this fine work of art at the end of our Bucharest Urban Explorer tour. It was created by two of Romania’s most famous artists, Saddo and Pren. You will find it at the University of Architecture and Urbanism, known as ‘Ion Mincu,’ The artists described it as “an open invitation to enjoy a feast of colours and good vibes.” Watch them in action below: 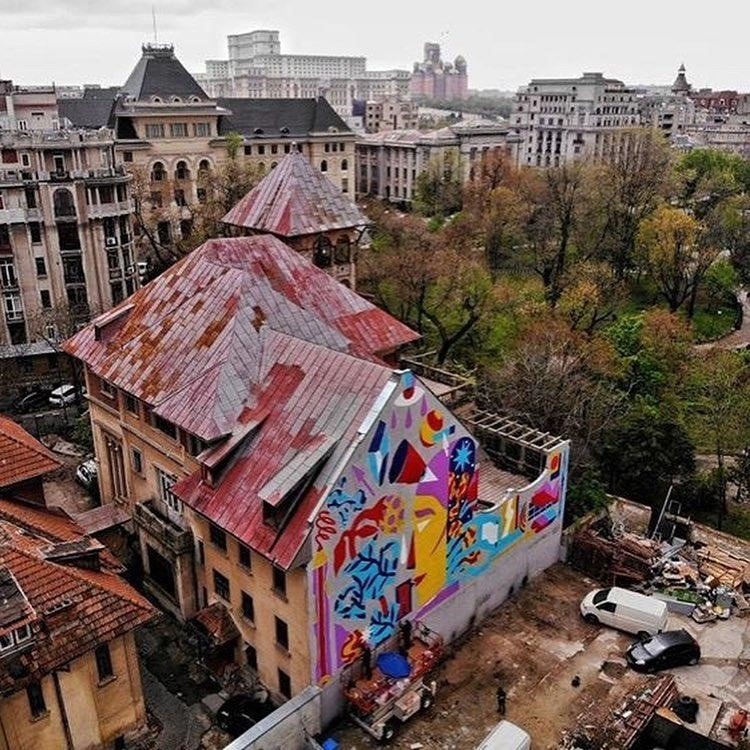 We are partners with Visual Playground, a hipster illustration and graphic design festival in Bucharest. In 2019 another very cool street art project sprung up as a result of our collaboration with them, skillfully completed by talented street artist AKACORLEONE (aka Pedro Campiche, a Portuguese/Swiss street artist who has been taking the street art world by storm). Its main purpose was to bring colour and positive vibes to one of the oldest yet charming part of the city, around Cismigiu Gardens area. Find out more about this project, here. 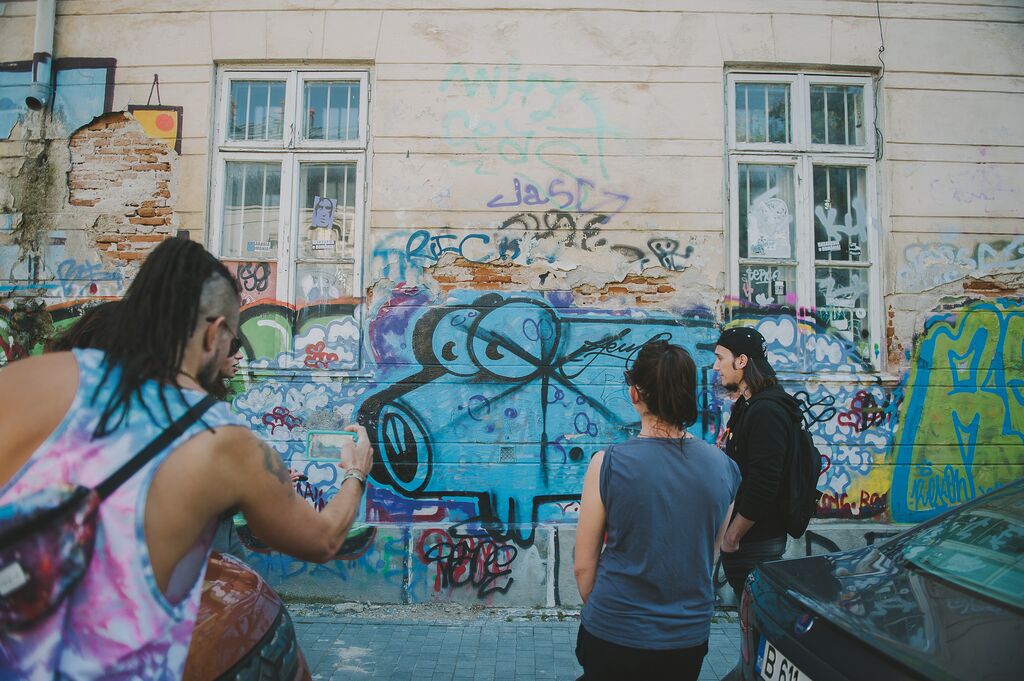 This is regularly the feedback we receive from happy customers. Other claim to have not cared about street art, until they did this tour and realised the impact that it could have.

If you are eager to find out more about the evolution of the street art movement in Bucharest and check out impressive street art works signed by local emerging talents or world renowned street artists just as famous as Bansky, you should book Urban Adventures’ Alternative Tour or, if you’d like to combine street art with spectacular urban decay, take our Alternative Urban Explorer Tour. Both tours are especially designed for urban explorers looking to discover unique, beautiful locations within the city, who want to learn about its history and find out how the city has transformed itself over the years. Led by expert local guides, both tours provide insight on some of Bucharest’s best-kept hidden gems, away from the hustle and bustle of the usual touristy spots. You will even be granted exclusive access to an exceptional old building that’s the visual definition of beautiful urban decay; the interior has been decorated inside by local street artists, with artworks commissioned by us, using funds from this very tour! Cool isn’t it? Get ready to experience your #BestDayEver ! Book the Alternative Tour during your next visit to Bucharest.