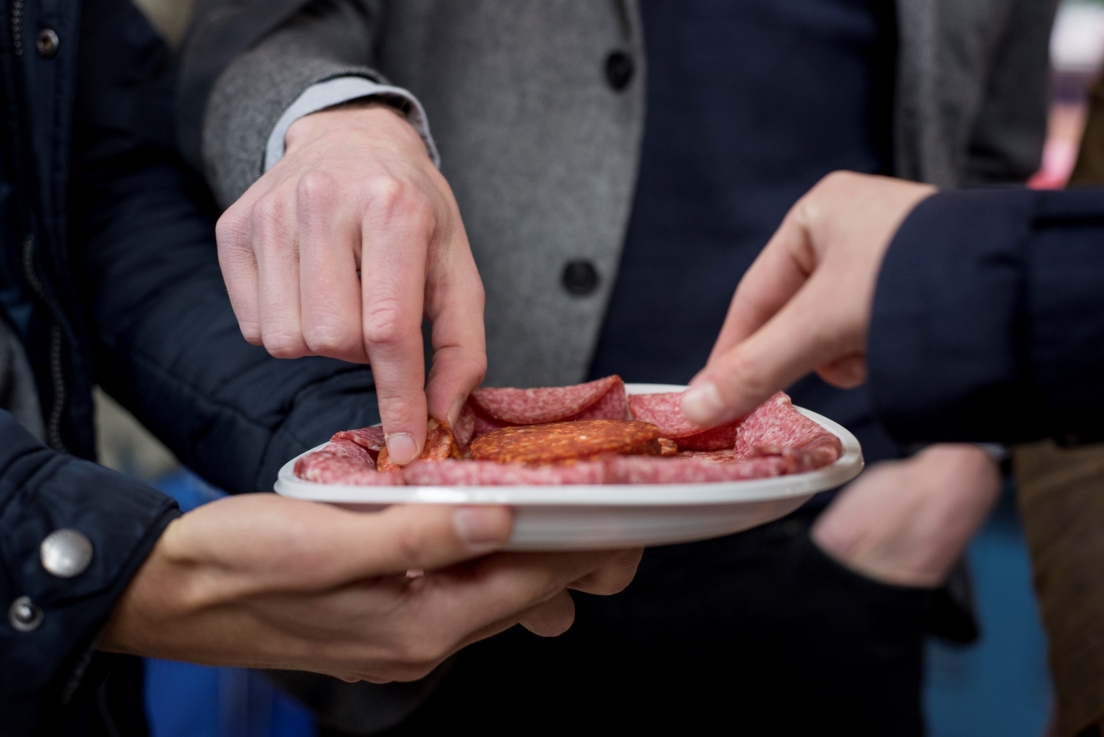 Tasting the bites and seeing the sights with Gergo in Budapest

It’s a blazing hot day in the middle of summer in Budapest, and a group of 11 travellers from various parts of the world are gathered outside the city’s iconic Central Market Hall. We’re hungry to explore one of Europe’s great destinations, and Gergo Csada, our guide, has just the plan to weave the varied flavours of Hungary’s cuisine into our day alongside the fascinating and sometimes troubled history of his hometown and country.

Gergo begins our Budapest Bites and Sights tour exactly where you would expect. Leading us into Central Market Hall, which sits at the edge of the Danube River on the Pest side of the city just off the Liberty Bridge, he explains that the massive facility is the oldest and largest indoor market in Budapest.

The place is filled with vendors selling foods and goods brought to the market daily, and Central Market Hall is an important part of life for residents as well as a must-see destination for tourists who are interested in sampling the tastes of Hungary.

The first stop in the colourful and bustling market is a butcher’s stand, where slabs of meats fill the glass cases and sausages hang from ropes at the perimeter of the stall. We are here to sample a variety of spiced sausages. The butcher hands over a plank filled with seven types of sausages and salamis. There is pork and beef, and one row that features a distinctly darker meat. It’s horse. Gergo says that while many tourists are not used to seeing horse on the menu back home, the meat is a traditional item used in sausages and stews in Hungary. No one appears shocked, and many in our group give it a try. I sample one slice of all seven varieties and note that they are all very fatty but fairly delicious, each with a different level of spice or heat.

We move on to other areas of the market hall, and we watch locals chatting with vendors, ordering fruits, veggies, meats and cheeses that will be taken home and used for family meals.

On our next stop we sample fried pork rinds and fried potato cheese bread, or pogacha. Gergo tells us about possibly the two most popular ingredients that are featured in most Hungarian dishes: sour cream and paprika. Paprika was brought to the region by the conquering Ottoman Empire and has stuck around for centuries since. It’s used to add flavour to soups, stews and breads and is universally recognised as a true Hungarian flavour. Sour cream? Well, sour cream makes everything taste better, any Hungarian will tell you. “I’m not going to lie and tell you this is the healthiest food in the world,” Gergo says. “It’s a Hungarian food tour.”

He says this as he hands out a favourite treat of Hungarian youngsters. The Turo Rudi is a “healthy” snack bar: cottage cheese coated with chocolate. We gobble these up as we leave Central Market Hall and head out to explore more of Budapest.

Gergo suggests an ice cream stop to get a little relief from the heat. He takes us to his favourite spot for cool treats, Levendula. Locals know this as the best ice cream in Budapest. The shop boasts dozens of unique flavours such as wheatbeer, mint-raspberry, watermelon-mojito, Sicilian pistachio, and the namesake levendula (lavender). It takes a while to order because we are dazzled by all the choices. It’s hard to believe we are just getting started because we’ve tried so much already.

The Bite and Sights Food Tour takes about four hours to unfold, and we visit the Jewish Quarter to see the Dohany Street Great Synagogue, the second largest in the world.

It starts to rain in mid-afternoon, and Gergo has us duck quickly into a quirky bar complex just off the street. “It’s good,” he says. “I wanted to show you this place, anyway.”

READ MORE: Treasures and treats in the hidden shops of Budapest

We are standing in a courtyard within the walls of a building filled with eclectic art, murals, posters, drawings and other bizarre decor. It resembles a flea market more than anything else. This is one of the city’s Ruin Bars. In fact, we’re in Szimpla Kert, the most famous of these bars, which are housed in old buildings that are uninhabitable but well suited these days as hip, urban hangouts for eating, drinking, dancing and live music.

The rain lets up and we head out. Gergo promises that we will have a drink at a different Ruin Bar. Indeed, Csendes is quaint and filled with only locals except for our group. Our drink order includes spritzers, white wine and rose. These are like sports drinks, Gergo says, good for cooling off in summer time. I order a beer, so I can sample a Soproni IPA, a popular local brew.

This is just the kind of place you would want to spend a few hours at when out on your own in Budapest. We’re close to the home stretch. It’s Halkakas Fish Bistro for more food. Fried carp, silver carp, olive pate and fried catfish are placed in front of us. We devour it.

Then, we make our way to Koleves, a quaint eatery with a pretty garden in the Jewish Quarter, for a traditional matzo ball soup and an apricot and mint soup. Finally, we cap our food fest with what every good culinary tour in Hungary must feature: goulash.

Gergo takes us to Ferenc Jozef Sorozo, a restaurant that serves traditional fare, and we plunge our spoons into bowls of hearty goulash, topping them with paprika, of course. We then get a sweet finish to our tour. The final calorie bomb is Hungarian trifle, a layered pastry with sponge cakes, syrup, walnuts, vanilla cream and chocolate sauce.

Somehow, we find room in our stomachs to finish every bite.

Hungry for Hungary? Hop on our Bites & Sights of Budapest tour to get a literal taste for local life!