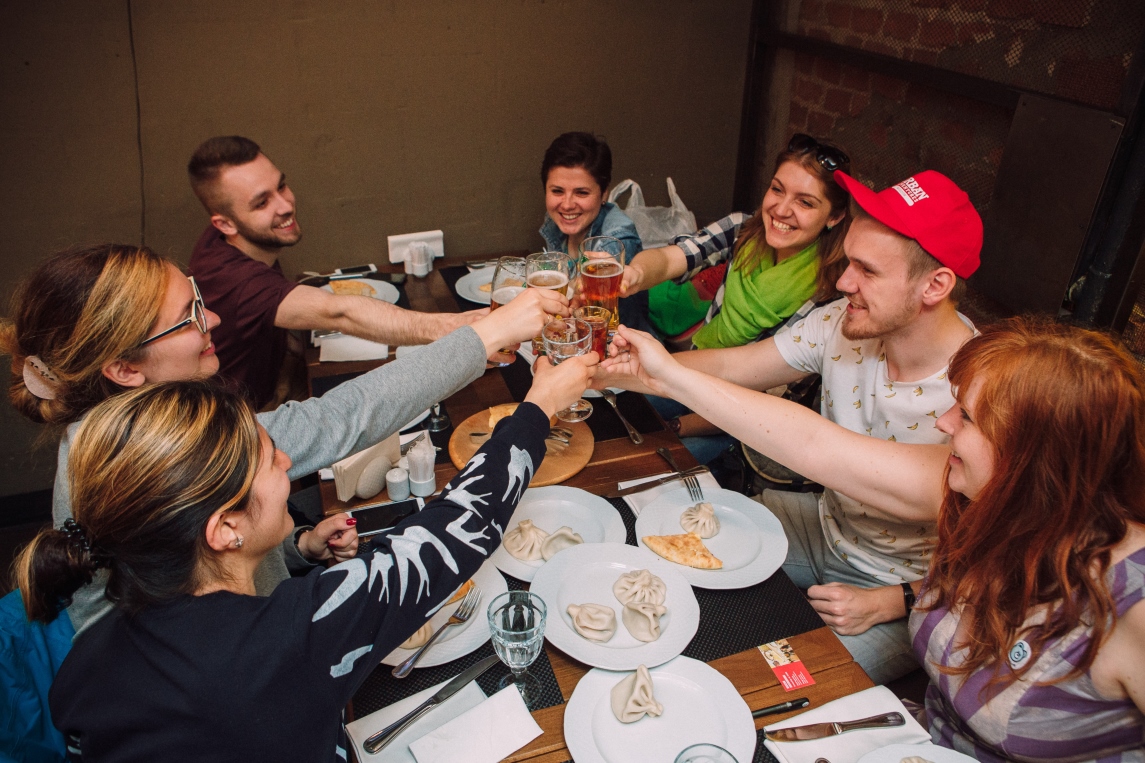 The best ethnic restaurants in Moscow

One of my tourists recently asked what makes Moscow really special. My answer was the country’s diversity – especially when it comes to food. Visiting Russia isn’t just about Russian cuisine. What makes us so unique is that you can try food from different Russian republics and from the former Soviet Union countries. There are over 200 nationalities in Russia and we used to be an even larger country than Russia is now. Our food tour, Eat like Russian, is a very good way to eat your way around the region in one delicious tour, and in addition, here’s a list of restaurants that I suggest visiting. Priyatnogo appetita (“enjoy your meal” in Russian).

There are obviously plenty of Russian restaurants in Moscow, but this one stands out for me, and it also happens to be a good place to have breakfast before our Behind the Icons tour. I recommend trying the cottage cheese pancakes (syrniki in Russian) simply because I love them, and this spot makes some pretty good ones. Mari Vana also offers a good variety of traditional Russian drinks. A huge hit right now is any buckthorn drink, which is sweet and sour at the same time. If you visit, don’t forget to say hello to the resident cat Venya, the fish Petya, and the Pavlik the canary.

You may be surprised, but in some areas of Moscow you can find more Georgian restaurants than Russian. We love Georgian food and some of us are ready to eat it every day. There are many options in the city, but my favourites are Natahtari and Khachapuri. What should you order? As my grandmother used to say, “No soup, no meal”, therefore soup is definitely on our list. Although the borsht is absolutely outstanding here, in a Georgian restaurant you should also try kharcho (a traditional Georgian soup usually made with beef and rice). If you love meat, it’s also the right place to try Georgian kebabs (shashlik) and Georgian dumplings (khinkali). Kids and vegetarians usually fall in love with all the different types of Georgian pizza (khachapuri).

It’s not an easy to find Dolmama even if you have the address so you will be absolutely proud of yourself once you finally reach it. Plus, my Armenian friend believes it’s the best Armenian restaurant in Moscow. In her opinion, it’s a little Armenia in the center of Moscow. Armenian cuisine is similar to Georgian and Azerbaijani, so it could be interesting to compare them. What I love about this cuisine in general is that it’s made for sharing. You might have your own portion of soup, but the rest is for the whole table to enjoy. You should definitely try an Armenian bread called lavash as it’s included on the UNESCO Intangible Cultural Heritage List (and goes really well with meat) . Also, eggplant rolls, Armenian cheese (it might surprise you), and spiced rice wrapped in vine leaves called dolma (the place is actually named after this dish, ‘Mother dolma” if you translate).

Odessa Mama (meaning mother in Russian) is not just a Ukrainian restaurant; it’s all about the city of Odessa. The good thing is that Odessa was perceived as a Jewish city, so you can find some meals prepared according to the Russian-Jewish tradition. I will share one such example from my own Jewish grandmother, which is very simple. When I was a kid, my grandma used to make me a chicken soup with matza. Matza is an unleavend flatbread eaten on Pesach (Jewish Passover). At Odessa Mama you don’t have to wait until Pesach to get your slice of matza bread. Eat it as a cracker-like bread, or order it with a chicken soup (that’s what I usually do). Another very Russian-Jewish dish is forshmak, which is a starter made of salty, minced fish. In the summertime you can enjoy a lovely terrace, but keep in mind that on the weekends the place is very busy. No matter when you go, you will be surrounded by the locals.

Uzbekistan was not only a part of the Soviet Union, it’s also the country from where we have the highest number of immigrants today. Inside Restoran Samarkand you won’t feel like you are in Russia any longer. The interior corresponds to the old oriental traditions and design: gilded columns, stained glass on the ceiling, and carpets on the floor. Plus, people who work there are from Uzbekistan. For many Russians, Uzbek cuisine is associated with pilaf. There isn’t just one perfect recipe for pilaf, there are hundreds and hundreds of them. In this restaurant you can try a few different types, including with lamb, or with red and yellow carrots. Other Uzbek classics include a fried pastry called cheburek, steamed dumplings called manti, and for dessert, chak-chak (fried honey cake).

Selenge is an authentic Buryat-Mongolian restaurant. Even for Moscow this cuisine still feels exotic. Buryatia is a unique region in Russia located in Siberia bordering Mongolia. The two most important ingredients of Buryat cuisine are meat and milk, so unfortunately, if you’re a vegetarian, this is not the best place to go. The meat lovers though, will always feel like they’re in heaven. You can choose between beef, lamb, and horsemeat. One must try is Mongolian steamed dumplings filled with meat called buuz or pozy. The stuffing is really juicy! In the winter you can warm yourself up with a shot glass of milk-vodka called tarasun. This restaurant has a very interesting interior. The main feature is a tent with carved chairs where guests love taking pictures. Here you can listen to a live performance and join traditional rituals during the Buryat holidays.