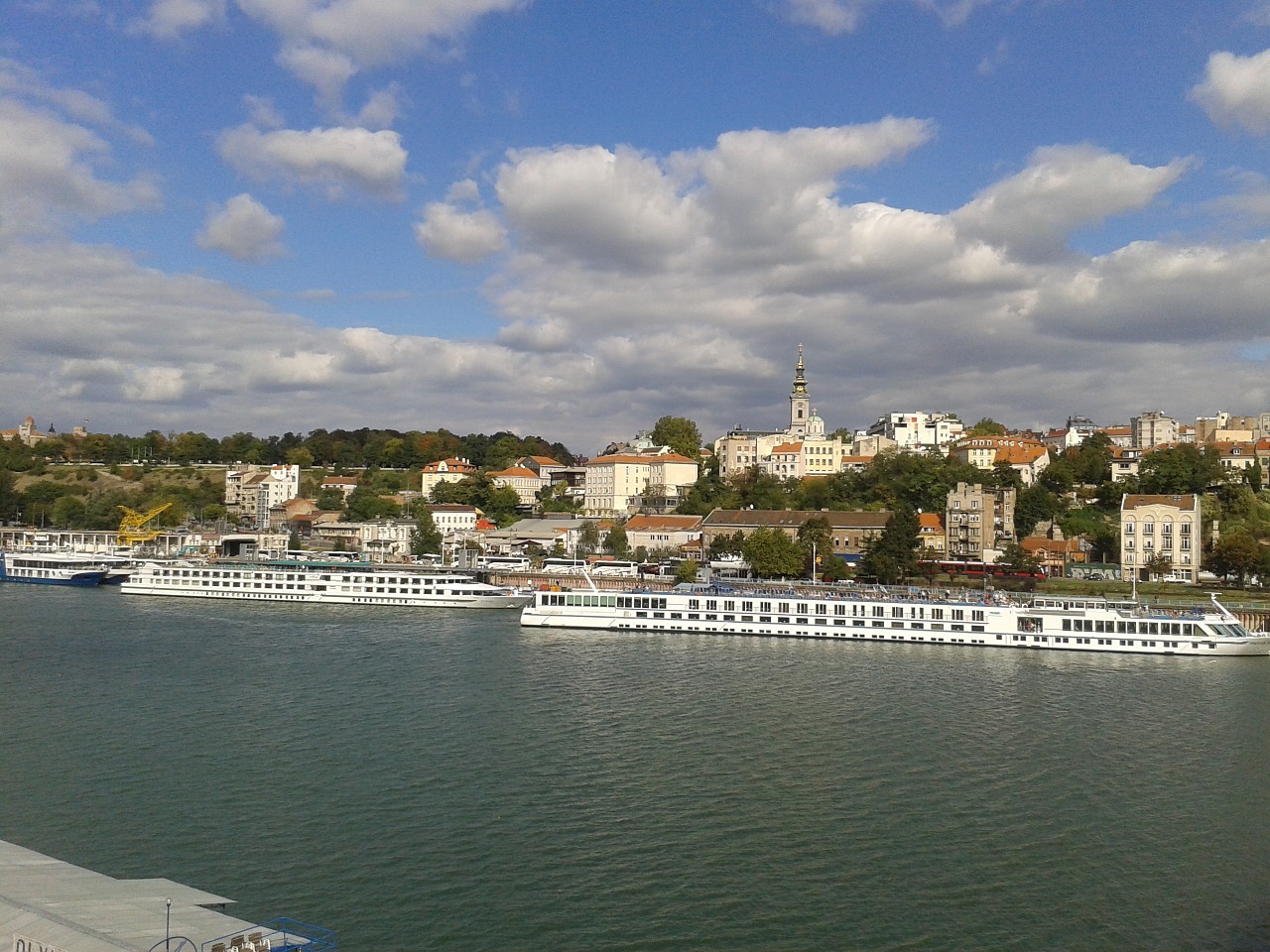 The complete guide to: Belgrade travel

No matter how much time you plan to spend in Serbia’s capital, the decision to visit is always a good one. Located on the confluence of the Danube and Sava rivers, Belgrade is the type of place you can return to again and again, always coming across something new to enjoy. The city has its fair share of must-see attractions, but it’s also ideal for DIY discovery since you never know what you’ll find as you explore — a stretch of awesome street art, a laid-back riverside bar or peaceful patch of green space made for relaxed afternoons in the sun.

Whether you’re planning a trip, or already packing to go, here’s everything you need to know before you go and once you arrive.

Getting to and from BEG

There are a couple of ways to get to and from the airport in Belgrade, including bus and taxi. If you’re taking public transit, look for bus number 72. It departs from the airport roughly every 35 to 40 minutes. You can buy your ticket from the driver, which costs RSD 150, and the journey gets you into the city centre, more specifically, Zeleni Venac, the main terminal for city buses. From there, the Main Street and Main Square are within walking distance, as well as plenty of popular tourist hotels. The bus drive is around 50 to 60 minutes from the airport to the city centre, depending on traffic.

There is a taxi desk located in the baggage reclaim area, wherein once you approach, you tell them where you’re going, and they give you a voucher for the taxi. Leave the airport building and you will see several taxis in a queue. Enter the first available, give the driver the voucher, and on the drop-off, you will pay the amount. There are five standard rates ranging from RSD 1,400 to RSD 6,000, depending on the distance from the airport. Taxi is a good option as long as you get it via the taxi info desk. 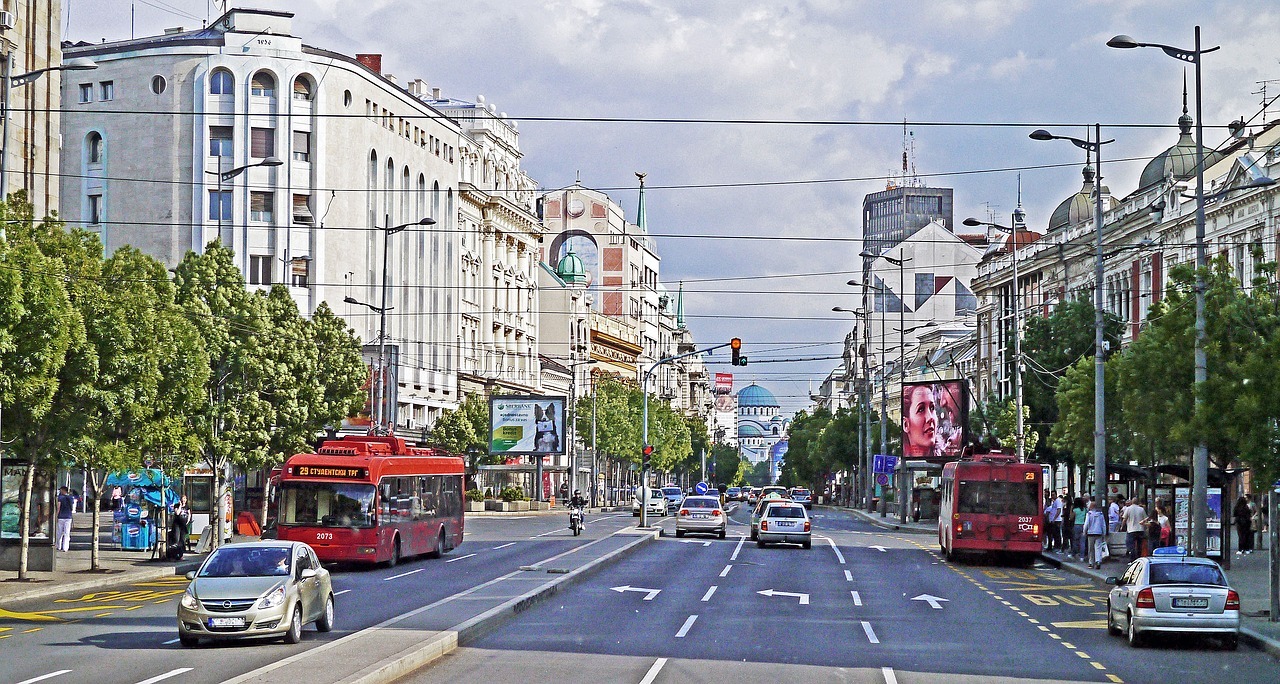 Streets of Belgrade | Photo via Pixabay

The standard rate when riding public transit (buses, trolleys and trams) in Belgrade is RSD 90 for 90 minutes (during those 90 minutes you can change as many buses as you like). First you will need to buy a BusPlus ticket, available at most corner shops and newsstands. You buy an empty card for roughly RSD 250, and then you add the minutes that you want. So typically, we would recommend adding RSD 450 to 540. If you are staying for a couple of days, this should be more than enough. Once you enter the bus, there is a machine on each bus door where you’ll need to press the card and it will deduct RSD 90. Day transport starts around 5am to 6am (depending on a specific bus number) and works typically until 11pm/midnight. After midnight there is night public transport (limited number of buses) and it is not covered by the BusPlus ticket. Instead, you’ll have to buy a ticket on the bus for 150 RSD.

Walking around the city centre is also a good option for getting around and often better than using public transport, which can take a lot of your time.

Things to do in Belgrade

Belgrade may be landlocked, but that doesn’t keep locals from hitting the beach. Head to Ada Ciganlija for some summertime fun in the city, a river island that has artificially been turned into a peninsula and known as Belgrade’s seaside. Here you’ll find a long stretch of beach on an artificial lake prefect for swimming and sunbathing. But if you’re feeling more active, you have plenty of options in the form of kayaking, water skiing, mini golf, cycling, fishing and even bungee jumping. At some point on a visit to Belgrade you’ll want to spend some time hanging out at Kalemegdan Park, one of the city’s best green spaces set within and around the Belgrade Fortress. In addition to scenic walking paths, Kalemegdan Park is also home to the Belgrade Zoo, Belgrade Military Museum, many statues and monuments, gardens, restaurants and galleries.

Experience Belgrade’s bohemian quarter with a visit to Skadarlija Street, sometimes known as the city’s version of Montmartre in Paris. The pedestrianised cobbled street is as charming as they get, and the area is filled with cafes, bars and restaurants serving traditional dishes. Grab a seat at a streetside patio table, order some food and drinks, and do some serious people-watching. If you happen to be in Belgrade during August (and you love beer), get yourself to the Belgrade Beer Fest, one of the biggest beer festivals in southeastern Europe. The beer-focused fun takes place over five days, around the middle of August, and features not only the chance to sample numerous beers, but also to enjoy a series of free concerts by local and international artists.

Belgrade on the big screen

Some movies filmed at least in part in Belgrade include the spy thriller The November Man, starring Pierce Brosnan, and crime thriller 3 Days to Kill, with Kevin Costner.

Get in the Serbian spirit by listening to some traditional folk music before you head to Belgrade.

The Houses of Belgrade by Borislav Pekić, first published in 1970, offers poignant insight into the history of the city and surrounding region.