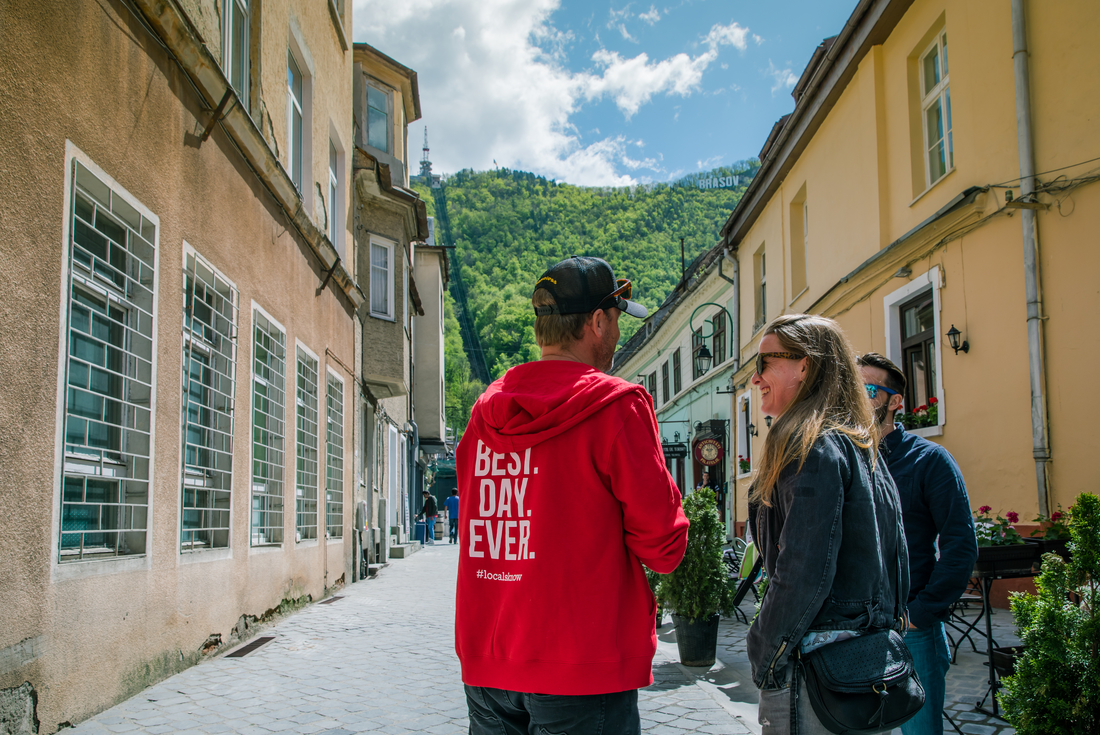 The complete guide to: Brasov travel

Welcome to this beautiful medieval Transylvanian town of Brasov; smack in the middle of the mountains, carefully balancing its large size and modern amenities with its small-town atmosphere, history and warmth. Whether you’re planning to visit for a few days or you want to stay a while, here’s how to prepare for an epic trip to Brasov.

Getting to and from Brasov

Brasov Airport is still a couple of years away from completion, so if you’re flying in, your best bets are to fly into Bucharest, Sibiu or Targu Mures International Airports and then take the train into Brasov.

Brasov is well linked to all major cities in Romania with four to nine connections each day depending on the city. Make sure to aim for the InterRegio trains as they are the fastest and most comfortable. Approximate price of a train ticket is EUR 12 from Bucharest, EUR 10 from Sibiu, and EUR 15 from Targu Mures.

Train tickets can be bought online beforehand — you will need to make an account and the user experience is not the friendliest or most intuitive, but it is doable. You can also buy tickets at the automated ticket counters in all main stations (they stop selling 45 minutes before the scheduled train departure) or at the ticket counters in the train stations (be careful as there is usually a line, so make sure you allow yourself enough time).

If Brasov is your first destination, then your best option is to use one of the several companies that provide direct transfers from the airport. Direct Aeroport and M&M Express are the most prolific ones. You reserve a transfer and they wait for you in arrivals and accompany you all the way.

Once you get to the city, our recommendation is to walk or rent a bike. The historical centre is just a couple of blocks, and even if you want to get to the more bohemian, mid-late 20th century parts of the city it does not take more than 40 to 50 minutes on foot.

However, if you have a short amount of time and would rather also sightsee form the bus between interest points, the bus network works great and traffic in Brasov is really calm so you can quickly move from place to place. Two trip tickets are LEI 4 (90 eurocents), and make sure you validate your ticket when you get on the bus.

Things to do in Brasov

Walking the cobbled stone streets in the historical centre is the first thing anyone should do in Brasov. The Old City is quite small, and you can easily trace its borders by looking to the old city walls that have been preserved and still enclose this historical area. If you want to get an exact lay of the land, then start your walk with a visit to the Weaver’s Bastion where they have a scale model of the city.

You’ll also want to spend some time getting lost in the streets of the old Șchei neighbourhood spreading higher and higher up until the base of the Mount Tampa. Back when the Saxons established the city, Romanians were not allowed to own property within its walls so they started building their houses next to the gates. As the city grew, they kept building and expanding further and further, creating this picturesque neighbourhood with narrow streets, steep stairs and small, beautiful houses.

If you want to go even higher up, take the cable car (one way EUR 2, return EUR 3.50) or walk up (45 minutes to an hour) to the peak of Mount Tampa for the hands-down best views of Brasov. Don’t forget your selfie stick.

If you feel like getting active, you can take the No. 20 bus to Poiana Brașov just 20 minutes away from the city centre. This is Romania’s biggest ski resort where you can enjoy a walk in the woods or rent a bike and explore.

Try your hand at a new sport: in summer, take a taxi (EUR 7-9) for a short ride outside Brasov to YAZ, where you can enjoy a nice lunch on the side of a lake with a wakeboarding cable system. In winter, go up to Poiana Brasov, rent a snowboard, skis or a sled and have some fun in the snow followed by some fun with a cup of mulled wine.

Brasov on the big screen

Get in the mood for Transylvania and all its mythology with a screening the 1992 film Bram Stoker’s Dracula. It may not have been filmed in Brasov, but it might just be a fun watch before you go. To get a visual sense of Brasov, take a look at this short video giving an overview of the city.

If you’re planning on checking out Bran Castle, commonly known as Dracula’s Castle, either before or after your time in Brasov, dust off a copy of Dracula by Bram Stoker before your trip.