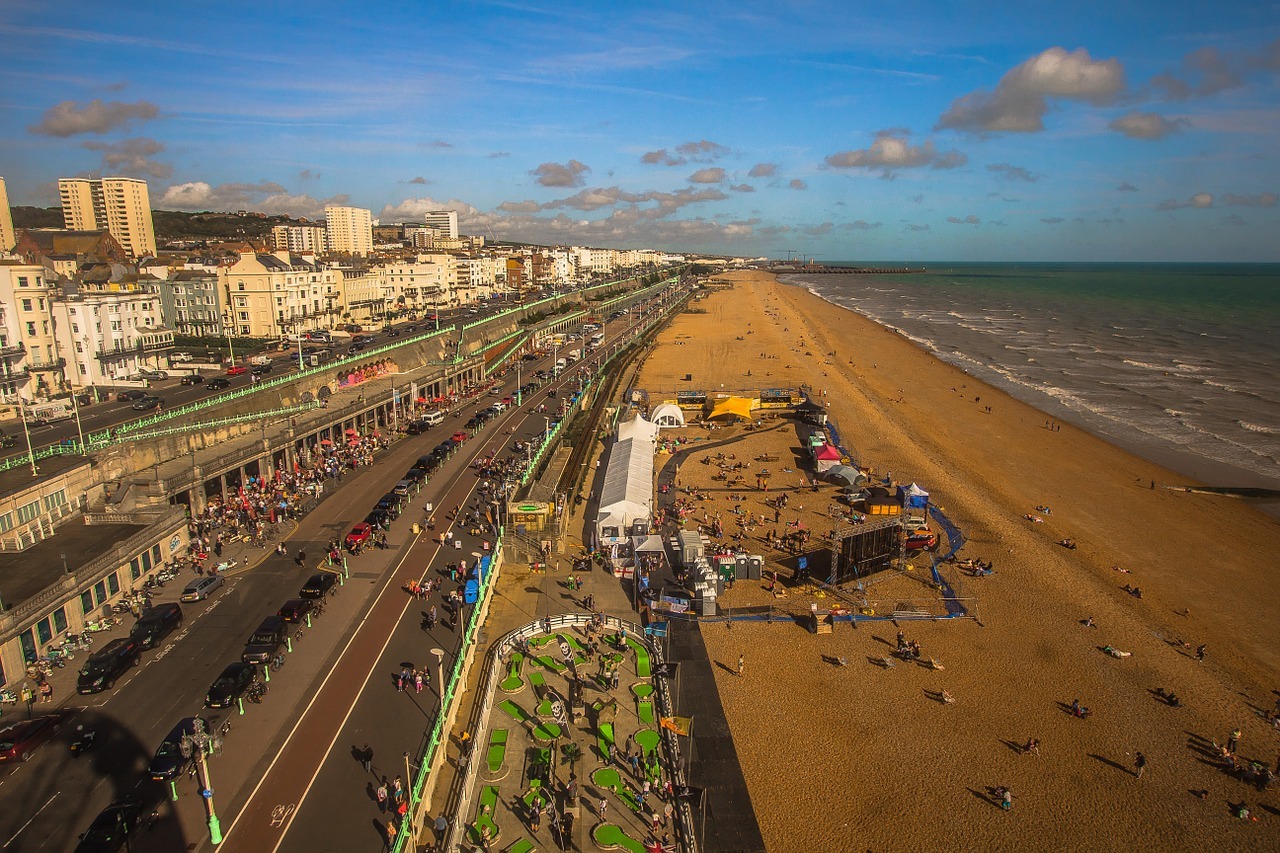 The complete guide to: Brighton travel

Just a 60-minute train ride from Heathrow, and only a 30-minute train ride from Gatwick, Brighton makes for an easy weekend escape from London if you happen to be visiting, but it’s also a worthwhile destination in its own right. Compact and easy to explore on foot or bicycle, the seaside city is known for its waterfront attractions, quaint shopping areas, and having some of the best food outside of London. Ready to explore more? Here’s everything you need to know for a trip.

Getting to and from ESH

Chances are, if you’re coming into Brighton, you’ll be doing it via Heathrow or Gatwick, both of which have good connections to Brighton. You can get a train or bus direct from Gatwick Airport to Brighton, and from Heathrow there’s a direct bus or train into central London where you can get a connection from London’s Victoria Station. From Gatwick, the trip to Brighton on the train should be 30 minutes. From Heathrow, the trip should take around two hours. If you are coming from Heathrow, you’ll be taking the London Underground to Victoria Station and connect with a train to Brighton.

If you’re on the bus, the trip to Brighton from Gatwick should be around 45 to 60 minutes, and the bus from Heathrow is around two to two and half hours.

The further in advance you can book a ticket (bus or train) the better to get the best route and prices, but if you’re just turning up on the day without a ticket, then the train is likely your better option. Prices vary wildly so if you can book online in advance, do. In general, travel is cheaper after 9am and outside of rush hours. The bus is nearly always cheaper but can take longer.

Taking a taxi to Brighton from the airport is also an option and should cost you around GBP 40 from Gatwick and GBP 80 from Heathrow. Brighton by night | Photo via Unsplash.com

Due to its compact size, Brighton is a great city to discover on foot. The railway station is only a 10-minute walk from the city centre, and the majority of Brighton’s attractions, shops and restaurants are all fairly close together, making walking a good option.

The bus is also a good way to see the city. A single ticket costs GBP 2.50 if you’re just planning on sticking to the city centre, or an adult city saver ticket for trips further afield (check the map, here) costs GBP 5. You can pay the driver, or buy a ticket in a newsagent, which will be slightly cheaper. You can also download the m-ticket app for free and let your phone become your ticket, with tickets being somewhat cheaper using this method.

Travel by two wheels makes for a fun way to get around Brighton and it’s fairly easy to rent a bicycle during your visit. Brighton Beach Bikes are the only bike rental service right on the seafront and are open seven days a week. Rent a bike for one, two or three hours for GBP 6, 9 and 12 respectively.

Things to do in Brighton

Sports fans might want to think about taking in a Brighton & Hove Albion F.C. match during their visit. Tickets for games start at GBP 25 and if you’re hoping to get to one, it’s a good idea to book well in advance now that the team has been promoted to the English Premier League. Football is a big deal in Brighton and Brighton & Hove Albion F.C. are soon to be in the top division for the first time in a long time. Games are scheduled for different times so take a look at the schedule before you visit Brighton and try to snag a ticket online. If you can’t get a ticket, find a pub to watch a game in with locals over a pint. If you feel like acting like a kid again, Brighton Palace Pier is the place to be, complete with stomach-churning rides and carnival games. The pier is also just a fun place to walk around and people-watch, or you can hang out at one of the pier’s bars and restaurants like Horatio’s Bar, which has free live entertainment throughout the year, or Victoria’s where you can have a drink overlooking Brighton’s seafront.

The Green Door Store is one of the best places in Brighton to catch some live music. Open since 2011, the venue is known for hosting up-and-coming bands representing a wide variety of genres. There’s usually something going on every night of the week so you should be able to see a show during your visit. Ticket prices vary, but the bar itself is always free and the music venue is usually free after 11pm. Check the live music listings here.

Anyone who isn’t afraid of heights should think about taking in the views from atop the i360 Tower, the world’s tallest moving observation tower. Visitors can admire 360-degree views across Brighton, the South Downs and, sometimes, all the way to the Isle of Wight from the futuristic glass viewing pod.

Anyone planning a visit to Brighton might want to look at making the trip in May to coincide with the Brighton Festival, a month-long arts festival that takes place for three weeks in May each year. The annual festival is a celebration of music, theatre, dance, art, film, literature, debate and even circus arts, with many outdoor and family events going on as well. Established in 1967, Brighton Festival is one of the biggest arts festivals in the UK and draws top performers from around the world.

Brighton on the big screen

If you want to get a feel for Brighton before you visit, look for the movie Quadrophenia, which is set in the city.

Add some Brighton-based music to your pre-trip playlist with Fatboy Slim’s Big Beach Boutique, which was recorded in Brighton. The Kooks are a famous local band, and The Who’s Pinball Wizard makes mention of Brighton.

Peter James’ crime thrillers are set in Brighton, so grab a couple to read on the plane or train before you pack up to visit Brighton.