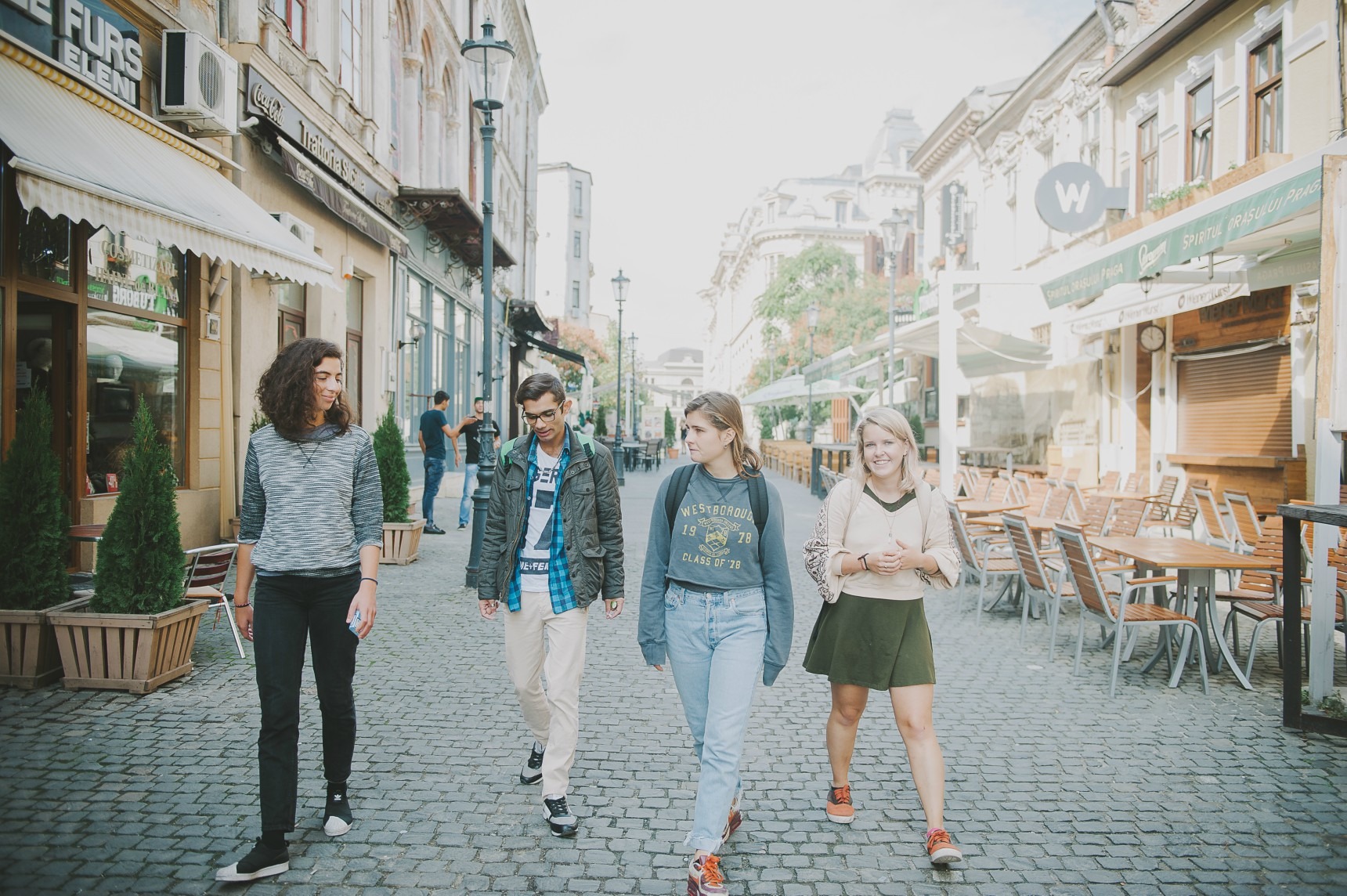 The complete guide to: Bucharest travel

One of the biggest cities in Europe, Bucharest is an up-and-coming destination that offers unique architecture, eclectic neighbourhoods to explore, quirky street art, a beautifully restored Old Town filled with cafés and bars, and enough interesting museums to keep any culture-lover happy. If you’re interested in visiting or are already planning your trip, our knowledgeable local Bucharest tour guides have the inside scoop on everything you need to know to have a memorable experience in the city.

Getting to and from OTP

Bucharest Otopeni Airport (OTP) is located 16 kilometres outside the city, and the easiest way to travel to and from the city centre is by the 783 Express bus, which takes you to Unirii Square, available 24/7. Buses run every 30 minutes during the day and every 40 minutes at night.

You’ll need to purchase a travel card (Activ) from the little kiosk on your right-hand side as you exit the arrivals terminal. The cost of the card itself is RON 3.70 and the cost for one express trip is RON 3.50 per trip/person. We recommend charging RON 7 to your card initially if you plan to use the same card to travel around the city by tram, bus or using the metro.

If you prefer to get to and from the city by taxi, you can take any of the authorised cabs from outside the airport — the taxi station is located at the exit of the terminal and will take passengers in the order of their arrival. A trip from Otopeni Airport to the city centre will cost about RON 46. We recommend exchanging your currency first and paying for the trip in Romanian leu rather than trying to use euros.

Once you arrive in the city centre, it’s easy to walk to the main city sites, or you can take a variety of public transportation to your desired destination. For buses, trams and trolleys, if you arrived from the airport by a means other than public transport, you will need to purchase the aforementioned Activ card for RON 3.70, which you can then load with money to get around. One trip costs RON 1.60. Buses, trams and trolleys run at various (and sometimes inconsistent) intervals from about 4:30am to 10:30pm. Get a card at the RATB kiosks that can be found next to major bus and tram stops.

Walking is often the best way to get to know the city and the real look and feel of Bucharest. You can easily walk from one main site to another, as most of them can be found around Romana Square, Victory Avenue, University Square or Unirii Square.

Things to do in Bucharest

The most popular sport in Romania has to be football — the European version. The biggest and nicest venue hosting the big games is the National Arena. The cost for one ticket for a national or international game can be anywhere between RON 15-100, depending on the game and where your seats are. The best way to purchase tickets for any of the big games is to book them online, usually from the official team website. The National Arena stadium is not only the standard playing venue of the Romanian national team but an impressive venue itself. It has over 55,000 seats, and every game can be pretty passionate and intense.

Piaţa Obor, or Obor Market, is the largest market in Romania and also one of the country’s oldest. The sprawling market is filled with stalls and shops selling local goods and produce from villages near Bucharest, and you can find everything here from organic fruits and vegetables, to local cheeses, meats and honey. The market also sells souvenirs and the usual assortment of knick-knacks and knock-off goods, but really, this is about the food. If all the browsing works up an appetite, follow your nose to the vendors selling mici, essentially a small, grilled sausage traditionally made from a mix of pork, beef, lamb and various spices. You can get some at the market along with cheap beer when you need a pre- or post-shopping snack. Located just 10 minutes outside the city you’ll find Therme Bucuresti, home to the largest urban beach in Europe. Visiting in the winter? That’s okay — the massive complex is open year-round and offers the chance to dip into nine indoor and outdoor thermal pools, relax in a variety of themed saunas, and feel like a kid again on 16 waterslides or in the wave pool. Therme Bucuresti is also home to the largest botanical garden in Romania with over 800,000 plants, a palm-filled relaxation area and several dining options.

Bucharest’s Old Centre (Centrul Vechi to locals) should definitely be on your Bucharest itinerary and you’ll likely find yourself there at several points during your visit. Narrow, cobbled streets are filled with bars, cafés, shops and restaurants housed in restored 19th-century buildings. This is also where to come to experience the best of the city’s vibrant nightlife. Don’t miss a visit to Carusel Carturesti, a stunning six-floor bookstore well worth a browse of its collection of nearly 10,000 books. There’s a café here as well as gallery space on the first floor.

While not the greenest city in Europe, Bucharest does have its fair share of public parks. Cișmigiu Gardens is city’s oldest public garden and makes for a relaxing break from the city. Think winding paths, beautifully landscaped grounds, ample benches for people watching, and a lake on which you can skate in the winter and boat in the summertime (rowboats can be rented from the dock).

Looking for more things to do? Urban Adventures offers day tours in Bucharest, all led by local experts that will give you a taste for local life:

Absolutely Bucharest
Let yourself be charmed and intrigued by Bucharest, a city with a fascinating past and a vibrant future. Hear the stories behind the most important landmarks, stroll the cobbled streets of Bucharest’s lively Old Town, and just try not to fall in love with Romania’s charismatic capital along the way.

The Dark Side of Bucharest
Every city has a dark side and Bucharest is no exception. On this tour that delves into the city’s intriguing history, you’ll learn all about the deepest, darkest secrets of Romania’s colourful capital. This is not your average history lesson and what you learn on this tour won’t likely be in your guidebook — so get ready to be shocked, awed, and entertained.

Bohemian Bucharest: Markets & Mahallas
From the heart of the city to the tastes of the country, this tour takes you on a historical, architectural, and culinary adventure through the many faces (and tastes) of Bucharest! Journey deep into the neighbourhoods of La Belle Époque Bucharest, while sampling the traditional peasant foods that define Romanian cuisine.

Bucharest Sites & Bites
Take a stroll through Bucharest’s often turbulent but always fascinating history on this tour that will fill your head with facts and your stomach with delicious Romanian food!

Home Cooked Bucharest
Join this Bucharest Home Cooked experience with a local host who will welcome you into their home for a delicious, traditional meal. Tantilise your taste buds with foods such as ciroba, sarmale,stuffed peppers and fish, tocanita, and more. We won’t try everything on this list, but it gives you an idea of the tasty treats to come. Wash it down with some Romanian wine, tuica, or a soft drink, and say cheers with your new friends in Bucharest!

In Focus: Outcast Bucharest
This Bucharest tour is like no other, because you’re seeing the streets with those who live on them. Join a formerly homeless local on this tour of Bucharest’s main sites and through the cobbled streets of Old Town. Along the way, learn about the challenges that come with street life in Bucharest, and help to make a difference by supporting a local NGO.

Total Bucharest Tour: Absolutely & Bohemian
Experience Bucharest through the ages on this tour that packs in the best sites, the best food, and the best drinks in one day. You’ll see the city from every angle, from its Old Town, to its La Belle Époque neighbourhoods, to its Communist era, with plenty of Romanian stories and snacks along the way. This adventure merges two of our favourite Bucharest tours into one fantastic day.

Watch to discover what you’ll see, do, eat and drink on our Bohemian Bucharest tour.

Bucharest on the big screen

The Necessary Death of Charlie Countryman, a 2013 film starring Shia LaBeouf about a traveller who falls in love with a Romanian woman, is set in Bucharest and the city is on full display throughout.

Romanians love Subcarpati, a Romanian hip-hop band playing traditional music with a twist — a mix of Romanian folklore with electro and hip-hop beats.

Romania: Borderland of Europe by Lucian Boia will smash down every cliché about Romanians while making you want to visit this unique country. The book traces Romanian culture, history, language, politics and identity from the Middle Ages through to today.

To find out more about your trip to Bucharest or to book an Urban Adventures tour, you can reach us by phone at +40 722 629 540 or email us for more information. You can also follow us on Instagram and Facebook for live updates from Bucharest.