Blog > There’s an art to craft beer in Costa Rica 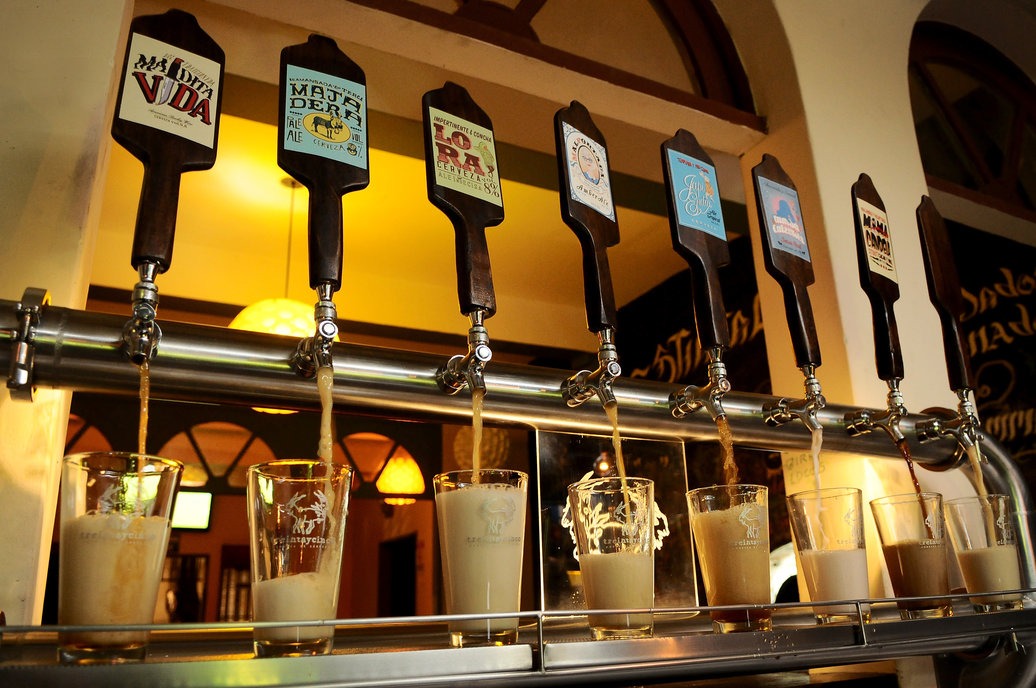 There’s an art to craft beer in Costa Rica

We meet up with Eric Gomez and Hector Castillo just outside the Teatro Nacional in San Jose City. After all, Costa Rica’s national art theatre, which opened 1897, is a fine place to kick off our tour of the city’s more modern works of art: craft beers.

San Jose has seen a rapid rise in the craft brewing industry, and it is helping to create new identities for barrios surrounding the main areas of San Jose. More than 40 new, small-sized brewers in the country have popped up in the past five years, most in San Jose but also several in the Central Valley and coastal areas.

But before we get to the beer on Urban Adventures’ The Art of Craft Beer tour, our guides want to treat us to a unique way to clean our palates for the tasting experience. Eric says we’re getting ice cream. We wander away from the crowded downtown pedestrian area, hop on a bus, and moments later are strolling in Barrio Escalante to reach Galway, a corner sweets shop that offers ice cream con licor (with liquor).

The menu features ice cream infused with spirits such as Jagermeister, Bailey’s, Malibu rum, vodka and tequila. I choose the chocolate with Jack Daniel’s. A few licks in, and I wonder why this kind of ice cream isn’t available all over the world.

Now, it’s time to talk beer. Barrio Escalante is lined with restaurants and has been a hot spot for the surging popularity of craft beers in San Jose. We walk past several pubs with people out on patios, enjoying mild weather with beers and food. We sit down at Aguizotes Gastro Pub for our first two varieties: Lora (a Belgian ale) and Tumbocalzones (a pink-coloured saison with hibiscus) by Treintaycinco Brewing. Eric explains that beer is an important part of the history of Costa Rica but has long been limited to a couple dominant large brewers making pilsners and lagers. Florida Ice and Farm Co. is the nation’s beer giant that makes the ubiquitous Imperial.

While enjoying our flavourful beers at the first stop, we note the sidewalks and nearby pubs starting to fill up with activity. It’s just past 5pm on Saturday night, and Barrio Escalante is just one of the neighbourhoods enjoying a boost from entrepreneurs in and around San Jose interested in raising the culinary profile of Costa Rica. The new restaurants are also the primary outlets for residents and tourists to quench their thirsts for craft beers, such as San Jose IPA and varieties infused with starfruit or flavoured with smoked malt. Eric says the small-batch specialty beers can’t compete on price with the longtime favourite of workers in Costa Rica, who buy a six-pack to bring home. Instead, Hector explains, the pricier craft beers are part of an overall socialising and dining experience that a growing segment of the country has learned to enjoy.

Casa Brew Garden features a massive chalk board filled with beer choices. Bartender Ruben Hernandez says the pub serves up to 60 different styles as he helps us pick a paddle of six to sample. Ruben knows all the beers, and he helps us with our picks by asking about the styles we like. This is a fun part of the process, he says, something he likes to do with all the customers. Kind of like a craft beer dating game. He says many guys want a “strong beer” but that could have a different meaning for many people. Strong flavour? High alcohol content? American rock and pop classics fill the bar as more and more people settle in for another fun night in San Jose. This is what it’s all about and why these types of places have been opening up all over the city in the past five years.

We try a mead (14 percent ABV), smoked extra pale IPA and a few others. Ruben wants to keep them coming, too, but we have one more stop to make on our Urban Adventures tour.

Stiefel Pub in Barrio Amon has brewing tanks on display, funky murals and beer festival posters all over its walls, and a lively vibe. This is one of the very first bars in San Jose that served craft beers, starting over four years ago. Stiefel does it well, too, with a beer menu and food offerings that stand up to any U.S. craft brew spot. We order up another paddle of six varieties, dive into our appetiser of steak fries with crispy bacon and get back to chatting about life in Costa Rica, sports, food … and beers, of course.

The Art of Craft Beer in San Jose

As locals have travelled and experienced craft beer abroad, Costa Rica has seen an increase in the popularity of craft beer and microbreweries. With new flavours, new beers, and a new beer culture to boot, now is the time to experience the beer revolution in Costa Rica.

What lockdown has been like in Havana
Lonely Planet Best in Travel 2020: What not to miss according to locals
The 10 Most Romantic Tours in North America
Where to watch Euro 2020 in London
Best Street Food in Havana: Coco Glasé in Plaza Vieja