Blog > This Cretan artist is preserving tradition with his own hands 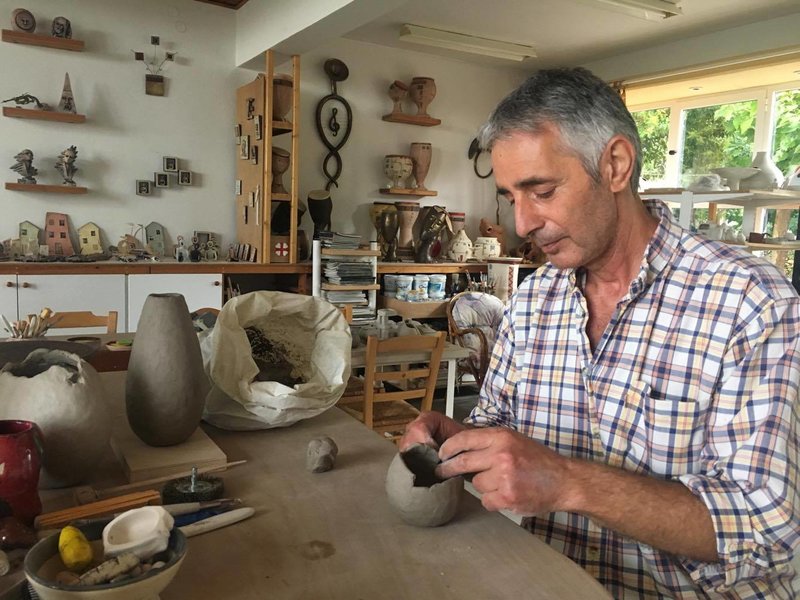 This Cretan artist is preserving tradition with his own hands

A few minutes away from the Old Harbour of Chania, close to the beautiful port of Souda, there’s a unique place that was created with one simple purpose: to show visitors to Crete some of the most authentic crafts of the region. This place is the Verekinthos Arts and Crafts Villages of Chania. Here, you can see over 30 different local artisans at work, who all have their workshops and homes in the village.

Among green trees and colourful bougainvillea — all planted in the area by the artisans themselves — there’s the Tetraktís Studio Pottery Workshop, run since 2000 by Yiannis Vlanoyilakis, but with a history that goes back over 30 years.

That’s because the whole village was originally designed and proposed in the 1970s by the Local Association of Artisans, which, at that time, represented over 120 artisans. The main purpose of the village was to gather the most representative artists of the community and provide them with a working and living space that could showcase their crafts in one place. The project was approved and slowly developed until 2000, when the village finally came to life.

Unfortunately, by then many of the original artisans had since retired, and others went out of business due to the Greek economic crisis — only 30 artists saw the project completed. Yiannis says he feels frustrated and saddened for all the crafts that were lost forever through this long and painful process. Many of the old artisans of Chania were not able to comply with tax requirements implemented by various governments, as their incomes were too low and would not allow for them to both pay taxes and earn a living at the same time. This was the case for his mother, as well as many traditional weavers and other artisans, especially housewives who would sew, knit and work with cloth — an art that’s now virtually lost. Yiannis says the bureaucratic practices are changing little by little, and when the Internet came, it made it easier for artisans to produce, promote and sell their art.

His eyes take on a different light when Yiannis talks about his history with clay and pottery. When he was 23 years old, he had his first taste of pottery, attending a workshop that ignited his curiosity for the manual work. He then made his way to Athens, where he took pottery lessons. There, he discovered there was no way he’d ever grow bored of pottery. It became a passion he couldn’t do without.

Yiannis had discovered a whole new world of things he was able to do with his hands, giving physical shape to his own ideas. He was committed to make his craft a way of life, and looked for a professional school where he could develop his abilities further. At that time, a professional school had opened in Chania, so he made his way back home, returning to Crete to study professionally. He bought his first equipment and started selling pottery even before finishing school. Upon graduation he immediately looked for a place where to work and produce his art — at that time, in the late ’70s, it was easy for a young artisan to take his first steps into business because it coincided with the growth of tourism on the island. He recalls these years as the moment when many of the artisans in the village began working and succeeding, having their products appreciated by the new tourists who were flooding into the country.

For Yiannis, the most important part of his job is the creative side of it. It’s to have an idea and put it into a material thing, shaping it and giving it meaning and purpose. He loves working with malleable material you can shape and form by hand, unlike products like iron or stone or wood that has to be cut by machine and has more physical restrictions. With clay, you are the owner of form, he explains. You can give form to anything you want, starting from scratch. Of course it’s not easy and there are many rules to working with clay: you need to be careful in the early stages so as not to break it later, you have to respect clay’s ways, and it’s a lesson in patience. It takes a long time to learn how to do things the right way — with clay you have to learn to wait. Like with anything in life.

Yiannis talks about his job with genuine passion, but he is also passionate about the things that frustrate him. He feels there’s a greedy market in the region, that doesn’t allow for local arts and crafts to develop. According to him, too many shop owners are focused just on money, whereas he focuses on art. He struggles to understand why many shop owners downtown are so greedy, while he manages to live and sell his art at reasonable prices. And he firmly believes that the attitude of many shopowners in Chania’s more commercial districts will end up killing local crafts if local artisans don’t become more serious about their work as a business. Customers don’t want to pay the extreme prices that many shops post on local crafts. He says that seeing stalls selling souvenirs of Crete made in cheaper destinations breaks his heart because there is a genuine risk of traditions being lost with every fridge magnet sold instead of an authentic piece of local art.

“Of course people do not want to buy souvenirs from cheaper countries, because those are the same things they see back home,” he says. “However, when they see local crafts so expensive in shops, there’s no way they buy them. That’s how the market works. And local shops complain that tourists buy less and less every year. Of course they are going to buy less if everywhere everything looks the same! Customers understand those things are neither local nor special. That’s the purpose of the Arts and Crafts village. We built this place having in mind that, if we are all here, people will learn about us and we can make local crafts and traditions accessible to all.”

Indeed, people who come to the village love the place, because it represents a unique opportunity to see different handmade items all in one place, and at affordable prices. And of course, there’s the added value that cheap, imported souvenirs will never have: customers see artisans at work here. As well, visitors can learn the art for themselves with hands-on lessons. Yiannis is always happy to teach his craft, to show how you can temporarily disconnect from your problems by working with clay. Putting hands to work is, for him, the best souvenir someone could take back home. “It’s not all about profit,” he says. “Sometimes I give people better value with lessons, rather than just a piece of art to carry in their luggage.”

If Yiannis hadn’t been a clay worker, he might have done something connected with graphic design or maybe agriculture — he says he can’t conceive of doing any work without the use of hands. For him, physical labour is real work. “I must see tangible results out of my work, work needs to have a process,” he says.

Travellers coming to Yiannis’ shop are able to see another perspective of clay, and can appreciate what can be done with pottery and ceramics, as well as many other different materials.

Even if people do not buy, he says, they come and are inspired. For Yiannis, there’s more to holidays than just going to the beach, back to your hotel and repeating it day after day. He loves it when people tell him that they’d love to try clay as a hobby back home, and when they express interest in the local artistic traditions. He says this is the moment when they stop thinking as tourists, and open their minds to seeing that life is made by people working on something special. This is even more important than collecting things, buying things and having more things,