Blog > Trendy, smelly, mild and cheesy: This Parisian fromagerie has something for everyone 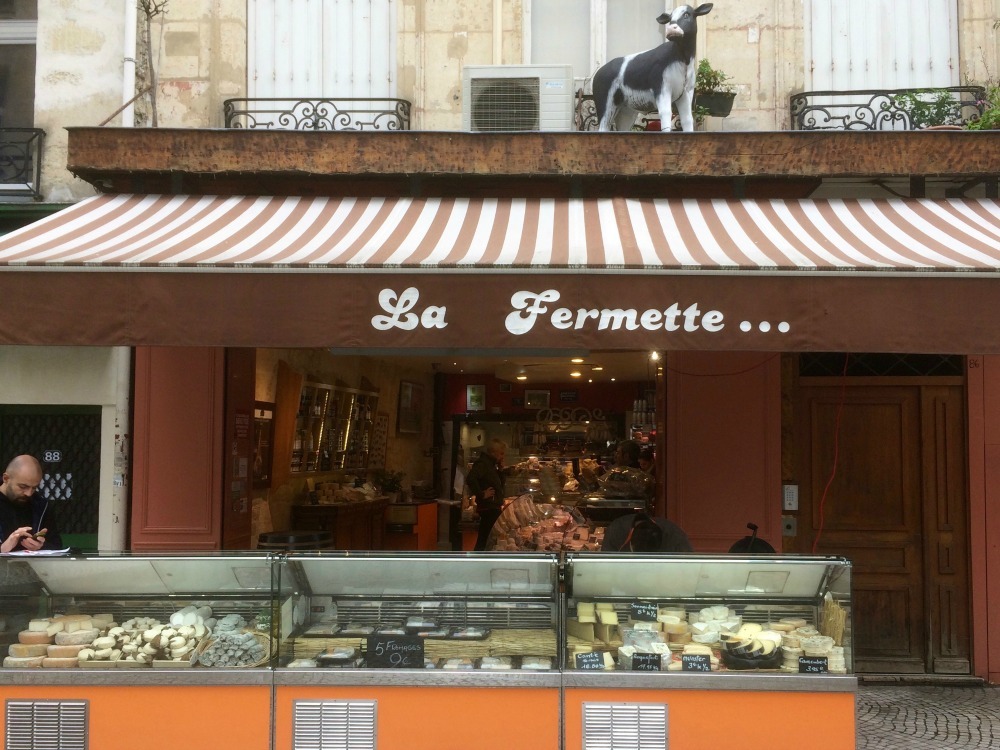 Trendy, smelly, mild and cheesy: This Parisian fromagerie has something for everyone

“Look at this, look at this.” Baptiste, a Parisian fromager shows me a page in an open book. “That’s what they ate in the 1980s.” The picture shows some quite mature camembert, so mature that the cheese has turned yellow and looks more like an old cookie than the kind of camembert you usually purchase in cheese stores.

Thirty-five-year-old Baptiste is passionate about his job, and it’s no wonder — it’s in his blood. He and his brother, Mickael, basically grew up in a cheese shop. Their father, Daniel, opened his first cheese store in Paris in 1990, before moving in 1997 to his current location. Daniel took over La Fermette, a historic fromagerie where cheese has been sold since 1895. Today, this lovely family-run cheese store on the equally lovely rue Montorgueil is a paradise for fromage lovers, where the owners sell only cheeses they love, but are also in tune with current taste trends.

The basket containing the cheeses they mature at La Fermette — combining distinctive kinds of fromages runny, smelly and strong as hell — only seduces a small portion of their customers. The rest go with the trends: a lavender hard cheese coloured bright blue, or some Dutch gouda with truffles.

“What’s weird about trends,” adds father Daniel, “is that in the cheese shop a couple of blocks away from us, they have cheese that we would never be able to sell, and vice versa. We could almost do a sociological study of our customers from the cheese they buy.”

Among the endlessly fashionable classics: comté, France’s national cheese and hailing from Jura, a region on the border of Switzerland. One wheel of comté (about 50 kilograms) takes a mere two days to sell out. Brie, as well, the only true ‘Parisian’ cheese, produced 40 kilometres from the capital. And of course, roquefort, the classic, salty, sheep’s milk blue cheese, the first French product to be labelled AO (Appellation d’Origine), in 1925. The AO label guarantees the quality and origin of a product, and roquefort’s approval pre-dates even the the most famous of all AO, the Champagne region.

Apart from these three classics, La Fermette offers a wide range of fromages. There are about 250 different kinds, ranging from mild and creamy goat’s cheese to the strongest of them all, la Boulette d’Avesnes, a cheese from northern France nicknamed ‘Satan’s suppository’ because of its shape and colour — and its smell.

The variety on offer also changes with the seasons because, like fruits and vegetables, cheese is actually seasonal. What’s in season depends on the quality of the milk (a cow grazing fresh spring grass outdoors will produce better milk than one stuck in a cowshed in winter), as well as the weather outside. You might well enjoy a hearty fondue or a melted Mont d’Or when it’s freezing outside mid-winter, but it’s probably not the kind of food you’re dreaming of during a scorching summer heatwave.

“All the cheese that we have here we have selected with love,” says Daniel. “We sell what we would like to eat, only the best. He gives a burst of laughter. “And we’re friendly and we speak English, so tell the foreign visitors they should come and visit us!”

To visit the fromagerie:

Or enjoy a tasting at the fromagerie on our Secret Paris: Cheese, Art & Local Life tour!

Get to know the City of Light through the eyes of a local on this tour full of tantalising treats and cultural gems! Start your Paris tour right in the heart of one of Paris’ most expensive and fashionable areas, where luxury, elegance, and beauty are around every corner.