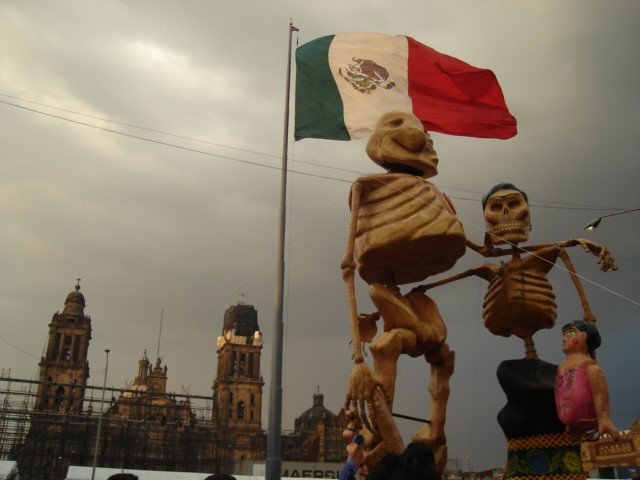 When the Dead come to dinner: Celebrating Día de Muertos

Imagine you’re hosting a huge party. Everyone is invited — all the family members and friends you love will be there. Even the ones who are dead.

In Mexico, this party is celebrated every November 2, when locals honour Día de los Muertos, or the Day of the Dead.

Locals believe that once a year, in the middle of autumn, all the deceased come back to the land of the living. They’ll maybe even stay with us for a few days. And what do we local living, breathing beings do? Make sure everything is ready for the Dead to enjoy their visit! After all, even though they are not alive, they are still our guests. Paper machè giant skull representations at Mexico City’s Zocalo, the main plaza; these kinds of handicrafts are created for both Day of The Dead and Corpus Christi | Photo by Mexico City Urban Adventures

Celebrations vary throughout the country, depending on the region and the local customs. In Mexico City, for example, we believe that no matter who we were or what we did during our lives, one day we will all be no more than skeletons in a cemetery.

Because of this, from October 28 to November 2, the entire city transforms into a cemetery of sorts — you’ll see skulls and skeletons almost everywhere. They are dancing, eating, chatting, etc. You may be able to see Frida Kahlo and Diego Rivera taking a walk in Coyoacan, or maybe meet the Catrina, a female skeleton who is our symbol of death and comes every year wearing an elegant Victorian-style dress and jewels, to remind us that not even money and wealth will be able to save us from her.

A Day of the Dead altar done by ‘Concheros,’ a traditional school of dancers from Mexico City who are inspired by Aztec rituals | Photo by Mexico City Urban Adventures

But in other areas, specifically in small towns in central Mexico, the celebration is quite different. Here, some locals will invite their deceased ones to share a meal with them, and literally take the celebration to the graveyard. They bring flowers, candles, food, beverages and everything their deceased ones loved while they were alive. Some even bring Mariachis or other music bands to sing with them the songs they enjoyed — it could be traditional Mexican music, or maybe salsa or rock ’n’ roll.

In some cases, people will stay all night, and wake up to find that even though the food is still there, it has lost its taste. It was eaten by the Dead.

A traditional altar for the Day of the Dead in Chiapas; in this case it is dedicated to the Mexican indigenous people murdered in the genocide of Acteal in 1997 | Photo by Mexico City Urban Adventures

Still others will decide to receive their deceased ones at home: they dress a table and fill it with flowers, food, personal objects and the portraits of the people they are expecting to come. Candles are lit, since the Dead are believed to come from a dark place.

Lots of families will also hang colourful papers from the roof as flags. According to the tradition, once the flags start waving, it means the Dead have arrived. All of this display is called the ‘Ofrenda,’ meaning ‘offering’ in English. Most altars also have a zempazuchil, or ash cross; this is usually considered the pòrtal from the World of the Dead and our world | Photo by Mexico City Urban Adventures

If you’re in Mexico during the celebrations, feel free to embrace the arrival of the Dead. Locals will be happy to introduce you to this great festivity.