Blog > Where to find the best pyzy and flaki in Warsaw 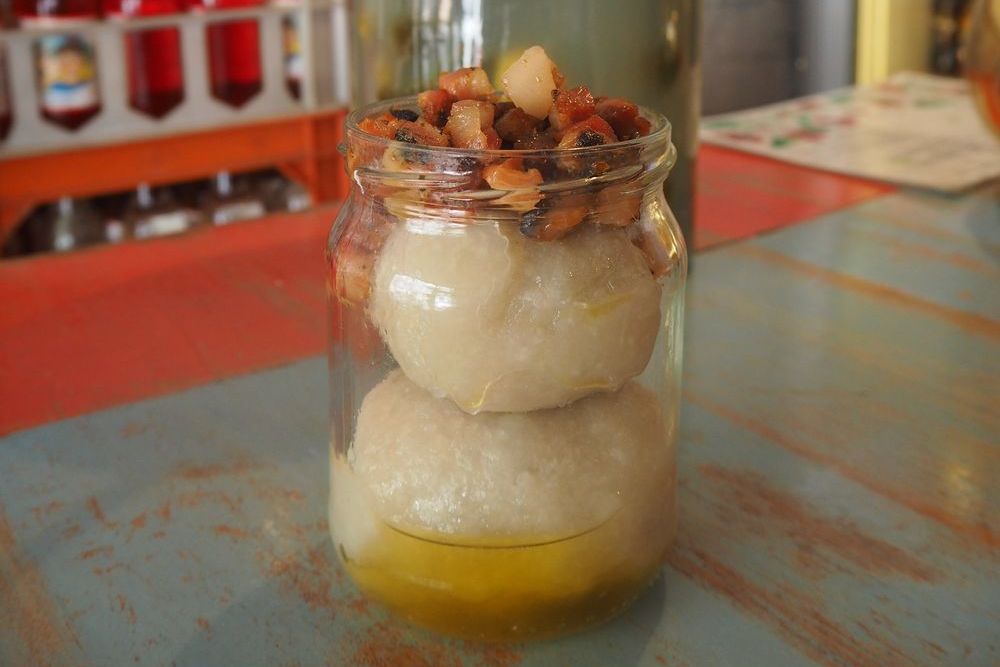 Where to find the best pyzy and flaki in Warsaw

Kasia and Jarek just celebrated the third anniversary of Pyzy, flaki gorące — a place where the authentic taste of Warsaw’s street food integrates with locals and foreigners alike, from a kitchen that has only recently moved to the Praga quarter. “When we were opening this bar three years ago, our friends were giving us maximum three months,” says Jarek.

Vistula’s left bank is still considered off-limits by many Varsovians. For decades it has been home to various street gangs, and anyone that went to the infamous “Bermuda Triangle” (Ząbkowska, Brzeska, Targowa) after dark would come back without their wallet, watch or even shoes.

“Things started changing about five years ago,” says Kasia. Artists and creatives, attracted by low rental prices, started moving their studios there, and even Google opened a campus right in Ząbkowska. The area is still years away from being the artsy and hipster Brooklyn of Warsaw, but it’s definitely going through a real transformation. Revitalised buildings, museums and co-working spaces co-exist with crumbling pre-war brownstones, over 100 courtyard chapels and underground bars and clubs buzzing with students.

The idea of opening a bar serving street food came from finding this exact place. It’s located right behind Warsaw’s oldest market, Bazar Różyckiego. Kasia and Jarek remember it from its glory days. Under the Communist regime, when stores were selling only vinegar, it was a place where one could buy anything from food to clothes and even foreign currencies. Its unique character and folklore was also defined by the taste of Warsaw’s famous pyzy (dumplings) and flaki (tripe soup), always served in glass jars. “We couldn’t imagine selling any other dish in this historic location, it just wouldn’t feel right.”

According to 18th-century sources, flaki po warszawsku, or Warsaw-style tripe soup, was a thick, heavy soup served with thinly chopped beef stomach and meatballs. “We wanted to give people the most authentic taste and made our meatballs with beef tallow, like in the oldest recipes,” says Jarek. “But we realised that modern consumers are not used to such flavours. We wanted to maintain the unique character of that dish but also meet our customers’ palate, so we modified the recipe and started making our meatballs with veal liver and parsley. Now it’s one of our bestselling dishes.”

Poles have always been fans of different types of kluski, or dumplings. When in Warsaw, make sure to try the local variety of pyzy. These meat-filled potato dumplings most probably originated from the Podlasie region but, contrary to their eastern cousins, kartacze, they are round, soft, always filled with cooked beef and sprinkled with bacon crisps on top.

“We felt like the classic pyzy left a lot of space for experiment,” says Jarek. “In these three years, we introduced a vegan and gluten-free version of the dish. Times are changing and tradition needs to meet innovation.”

Warsaw’s cuisine has always been reflective of the city’s diverse and multicultural character. “Foreigners come prepared to our bar. Japanese always order flaki. Israelis of Polish origins ask for pyzy and Italians choose Polish gnocchi, kopytka,” says Kasia. These rhomboidal dumplings are made of cooked potatoes and wheat flour. “They are small and plump and pair perfectly with our sauces.”

But Warsaw’s street food isn’t only about meat. If you have a sweet tooth, try knedle, another type of potato dumplings, generously topped with melted butter and breadcrumbs. “In June we fill them with strawberries, then with blueberries and now we are in the plum season,” says Kasia. “On Sundays, we have a little tradition of serving the classic Wuzetka cake.” This chocolate sponge cake took its name from Warsaw’s route, trasa W-Z, which, in the 1940s, was the location of the first shop that sold this dessert.

“We are very happy to see a mixed crowd of our neighbours, employees of newly built offices and tourists every day, looking for local specialities. But the biggest compliment came from the former vendor of pyzy from Bazar Różyckiego. She ordered our dish and reminisced, ‘It tastes like back in the days.’”

How to find it: Flaki, pyzy gorące, Brzeska 29/31, Warsaw. From metro Świętokrzyska, take line 2 to Dworzec Wileński. On Targowa street, take the first left to Białostocka and turn right to Brzeska after 100m. Cross Ząbkowska and continue for 50m until you see Flaki, pyzy gorące on your right.