Blog > Where to find the coolest street art in Paris 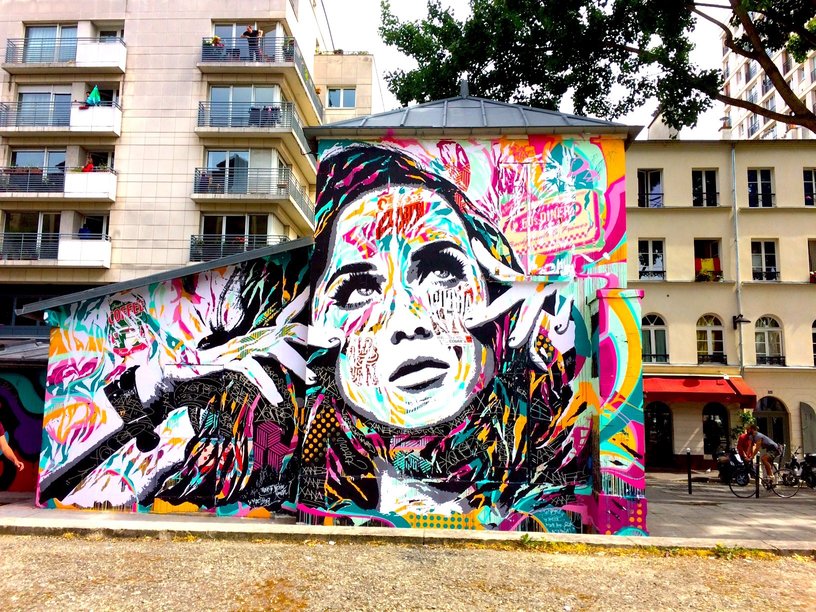 Where to find the coolest street art in Paris

For centuries, Paris has attracted artists from around the world, all of them seeking to be inspired by the City of Lights. With some 130 museums in Paris, there is so much art to see, but what about the local, contemporary art that lies beyond the Louvre, Musée D’Orsay or Musée Rodin? Armed with some good walking shoes, you can uncover the subculture arts scene of Paris just by roaming the streets. You’ll have to be quick though, as most of the art listed below does have an expiration date — eventually to be replaced by another mural or fresco. But in many ways, it is indeed this ephemeral quality that adds to the works’ mystery and beauty. If you are lucky enough to be in Paris some time soon, keep your eyes open for the local art below.

Along the Canal de l’Ourcq and Canal St-Denis, you will find lots of animation as you stroll the quay: people playing music by the river, lazy cafés, games of pétanques, boat rides and even ziplining in summer. For the second time, the gallery of urban art, The Wall, along with the 19th district city hall, joined together to present Festiwall 2017, a celebration of street art and urban culture. Many artists were invited to decorate the walls with urban colours and their unique views of the city, showing diversity and culture at its best. Among the artists invited were JBC, Jana and JS, and Jo Di Bona. The fruits of this incredible festival, which is held annually and took place on May 20 and 21 in 2017, are still available for your viewing pleasure. Here are a few of the marvels you are able to see: 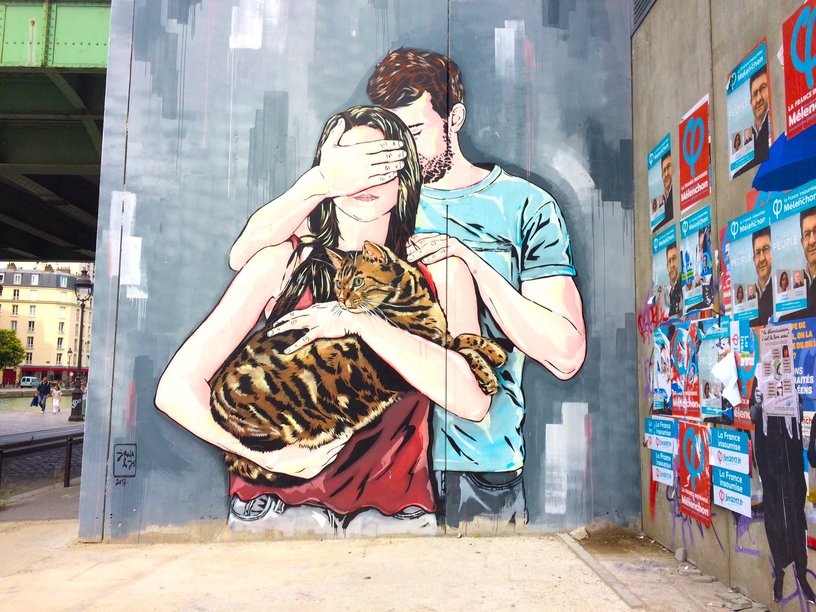 The adventure continues a little further away along rue de l’Ourcq in the 19th district. Here, you will get to see the works of the famous street artist Marco93, who has nicknamed himself ‘The French Lighter,’ because of the constant exploration of light in his work. In this giant fresco, Marco pays homage for the second time to Frida Kahlo, a female artist known for her role in the emancipation of woman, and who became a national symbol after the Mexican revolution in 1910. Inspired by the fact that Frida was often surrounded by animals, he has included a rather large feline with piercing eyes, further showing the contrast between light and dark.

The historic Marais neigbourhood located in the 3rd and 4th districts of Paris is known for its cafés, terraces, boutiques and trendy hispsters, all of which blend old world and modernity, creating an irresistible charm. In the Place Igor Stravinsky right beside Centre Georges Pompidou, you can stop to marvel at the mural of Salvador Dali — a perfect representation of old and new Paris.

Le Mur Oberkampf in the 11th district is part of the organisation Le M.U.R. (short for Modulable, Urbain, Réactif) and is a project created to promote urban art, particularly highlighting street art. Originally started in 2003 by Jean Faucheur, it features artists who support this art form while also showing off various different art mediums. As with all street art, it will eventually be replaced by the work of another artist. In fact, each piece doesn’t last much longer than a few weeks. No matter which piece is there when you visit, you are sure to be impressed and dazzled as you sip your café and gaze at the work in front of you.

In contrast with the clean streets, parks and grand avenues of the 7th district is an homage to the late Serge Gainsbourg, songwriter and composer, beloved among many French locals. Just outside his home, where he lived from 1969 until his death in 1991, people would leave pictures, poems and love message to the artist. Gainsbourg even had to repaint the wall in a fresh coat of white paint several times only to discover that the next day it was again covered in passionate messages from his devoted fans. The tradition has continued past his death with a large-scale portrait of the artist in vivid colours, alongside countless messages to be read by fellow onlookers. 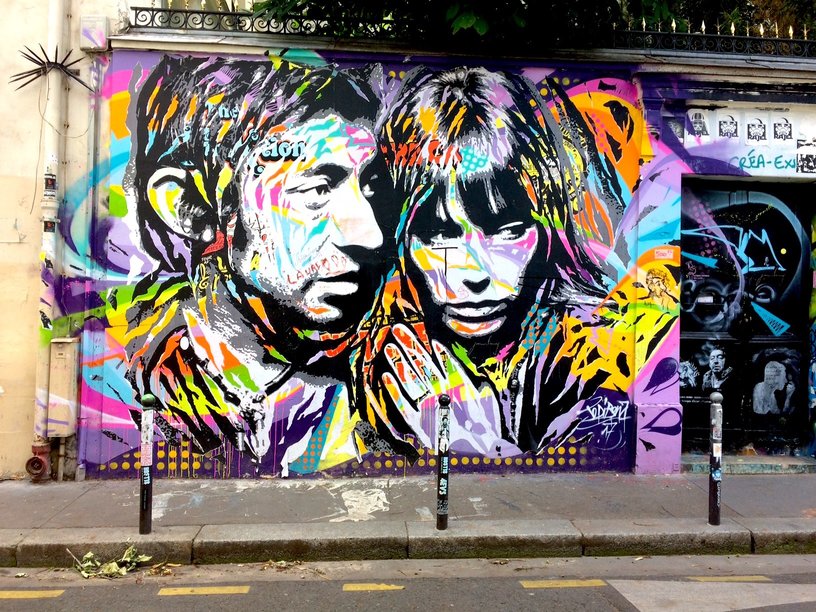 Last but not least, head over to the 13th disctrict, aka Chinatown, to view a myriad of street artists showcasing their art in and around Boulevard Vincent-Auriol — and adding a definite cool vibe to this primarily residential area. Check out Place Pinol with the giant mural of a women and man kissing by local artist D*Face, inspired by the City of Love itself, plus ‘Love Won’t Tear us Apart.’ Continue down Boulevard Vincent-Auriol to find the work of Seth featuring a young boy staring down a spiral wave of colour, beckoning us to use our imagination to guess at what has captured his eye. As you head to the Jardin Grands-Moulin, notice the giant skeleton painted by the stairs by artist Roa, which draws its inspiration from the natural history museum in Paris. For more street art, visit the website StreetArt13, where many more works are listed.

All across Paris, street art is yours for the viewing. And it is art that is changing the urban landscape of the city and, in my opinion, proving that Paris is still full of inspiration for artists from near and far.

From the back streets to the bakeries, there is something to delight the senses around every corner in Paris. Jump on a Paris tour with Urban Adventures to discover the most visited city in the world from a different angle.