Blog > 10 free things to do in San Francisco

10 free things to do in San Francisco

San Francisco doesn’t exactly have a reputation as being a budget-friendly city. In fact, you’ll frequently find it making an appearance on lists of most expensive cities in the world. But that doesn’t mean a trip to the city by the bay has to break the bank. In fact, San Francisco offers a lot of things for the budget-conscious traveller to do completely for free.

As San Francisco’s most well-known park, and the largest man-made park in the world, Golden Gate Park is an absolute must-see regardless of your budget. While some of the attractions, such as the botanical gardens and the Japanese Tea Garden, have a fee to enter, the majority of the park is completely free to wander through. With over 1,000 acres, you could easily stay the whole day here and not spend a cent. Walk to the top of Strawberry hill and enjoy views of the surrounding Stow Lake, spend a few solemn moments at the AIDS Memorial Grove, swing by the Koret Children’s Quarter if you have young kids, or walk out to the west side of the park to see the bison paddock.

As a bonus, if you time it right, you can even get into some of the normally paid attractions free of charge. The tea gardens are free Mondays, Wednesdays, and Fridays before 10am, and the botanical gardens are free from 7:30–9am most days throughout the week, and on the second Tuesday of every month. The de Young Fine Arts Museum and the Cal Academy of Sciences, both located in the park, also have periodic free days throughout the year.

Ah, the famous sea lions at Fisherman’s Wharf. Originally considered a nuisance that the marina tried to drive off, they’ve now become such a tourist draw that officials built them their own specially reinforced docks to lounge on. Take a stroll through the bustle of Pier 39 out to the end, to catch a glimpse of the smelly cacophony that is the sea lions. You can also hop into the Sea Lion Center for great educational and historical resources on San Francisco’s famous marine residents.

San Francisco has some of the most impressive and innovative museums in the world, and it would be a shame to miss them on your visit. While admission prices can be steep, keep an eye out for free days and discounted times. Just about every big museum in the city offers something for the more budget-conscious traveller. Also, there are quite a few smaller museums throughout San Francisco that are free, or ask for a small donation. Check out, for example, the Cable Car Museum.

Check out an outdoor movie night

Various locations throughout the city hold free outdoor movie nights, showing everything from the latest hits, to classics, to Disney movies for kids (singing along encouraged!). Times, days, and locations vary, but they are held fairly frequently. You can also check out the free Shakespeare in the Park series, which is exactly what the name implies — high quality performances of Shakespeare’s classic plays by a professional theatre group. 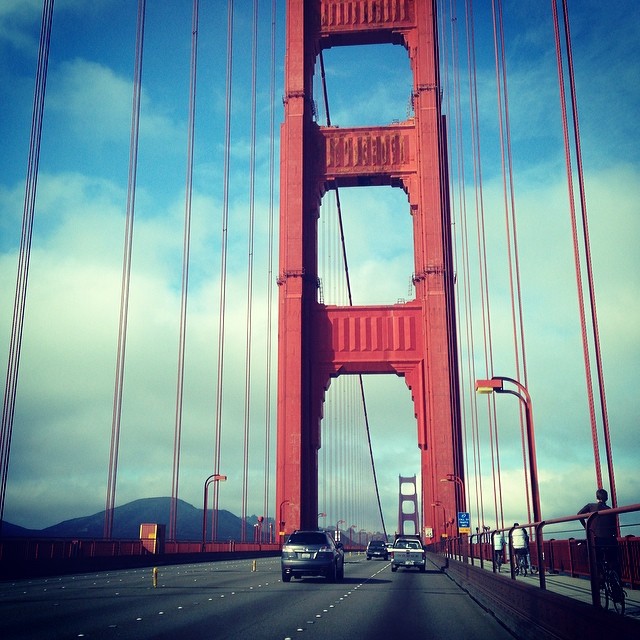 Walk across the Golden Gate Bridge

As San Francisco’s most famous icon, the Golden Gate Bridge is a stop on any visitor’s list. Luckily, you can get as up close and personal as you want with the bridge without spending any money. Walking all the way across the bridge is a pretty big time commitment, since the total length is 2.5 kilometres. (You may find that you’ll want to take public transportation back once you’ve reached the other side.) A crossing will put you in gorgeous Marin County, which is a destination in and of itself.

Many people opt to walk out to the middle of the bridge and back, which will take 30 minutes or so, depending on how fast you walk. Renting bikes, while not free, is still a pretty inexpensive way to see the bridge in less time, and to tour around Marin a little bit. Whatever you decide to do, make sure that you bring a jacket or sweater, as regardless of the time of year, fog and strong winds make the Golden Gate Bridge a chilly place to be.

This completely free museum is one of the coolest, quirkiest stops in the city, and is sure to bring out the child in you. Musée Mechanique‘s collection of antique toys, musical instruments, and knick-nacks is one of the largest and most extensive in the world. It’s also hands-on. You can wind up some of the toys, or try your hand at playing some tunes on the antique instruments.

As long as your legs can handle it, a hike up Twin Peaks is one of the best ways to get a view of the whole city. This popular trail gives you 180-degree view — just beware of fog, winds, and cold temperatures. Bring a jacket (a good rule of thumb wherever you are going in San Francisco), and try to plan the hike for a day when there isn’t a lot of fog, as you won’t have much of a view.

Visit Coit Tower and the murals

One of the prominent sights along Fisherman’s Wharf, Coit Tower stands atop Telegraph Hill. Built as a monument to Lillie Coit, the patron and unofficial mascot of San Francisco’s Fire Department (and quite the interesting character), the tower is also home to a series of murals. Painted by 27 different artists in the early 1930s, the intricate and elaborate murals have inspired controversy for their politically and socially charged themes.

A walk to the top of Telegraph Hill is a great way to spend some time, as well. The stairs take you through some gorgeous gardens and past some lovely houses, and show you a very different side to the city. 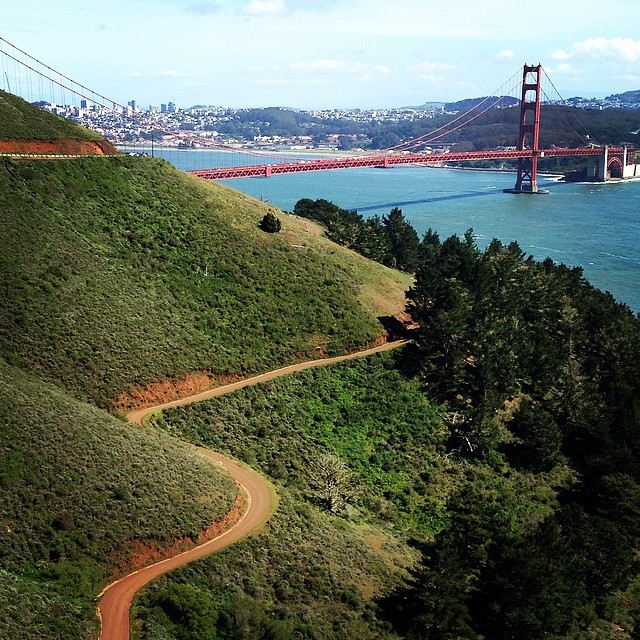 Hike along the Coastal Trail

If the hike up Twin Peaks seems too strenuous for you, don’t worry — the California Coastal Trail is pretty level and very easy to follow. It runs from the Golden Gate Bridge to the ruins of the Sutro Baths, past absolutely stunning coastal scenery. You get great views of the city and the bridge, some peace and quiet, and a great afternoon for free. There are a number of points to jump off the trail and catch public transportation on to your next destination, too, if it’s too chilly to walk the whole thing.

While not nearly as large as Golden Gate Park, Yerba Buena Gardens is critically acclaimed for its design and urban art. If you feel like shelling out a few bucks, there’s also an ice skating rink, and a bowling alley at the park. The gardens are also right in the centre of more museums than you could visit in a week, some well within the free to pretty-cheap price range.

If San Francisco’s in your travel plans, our SF guides can show you a day in the local life.