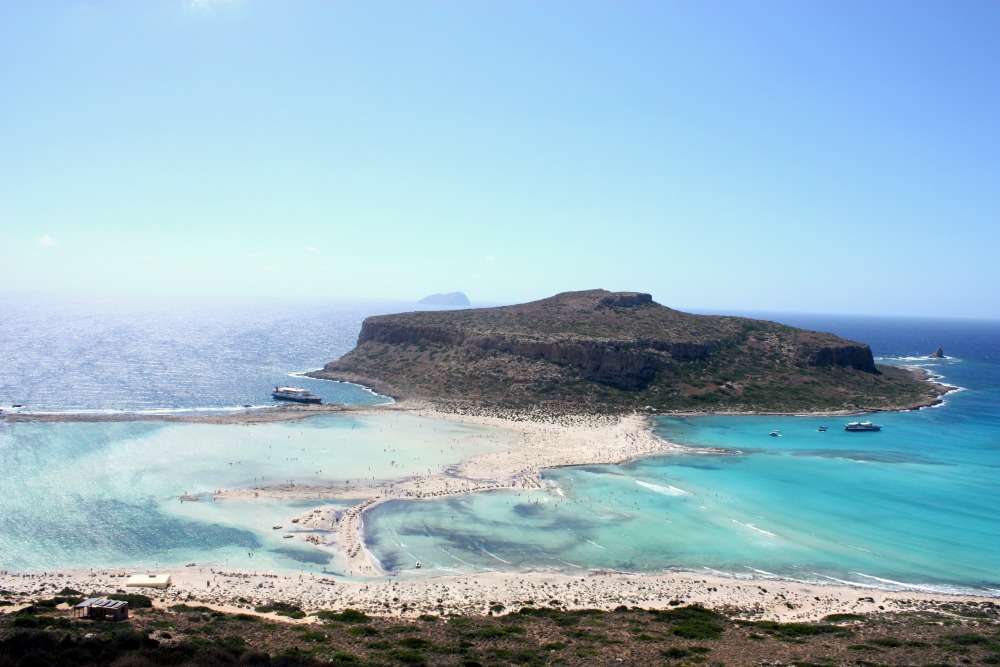 If ancient civilisations, beautiful architecture, and the turquoise waters of the Mediterranean pique your interest, Heraklion is the perfect place to visit! Crete is the largest and most populous of all the Greek islands, and the fifth-largest in the Mediterranean Sea. Tucked away in the northern part of the island is Heraklion, the island’s capital city.

For most city-residents, the day starts around 9am, as that is when most shops open and the city comes alive. If that seems like a late start to you, don’t be discouraged as the city really does have so much to offer.

If you’re crunched for time it’s definitely good to start early, as there are so many sites to see! Heraklion, like all modern-day cities, is packed with endless possibilities, so if you want to see as much as is humanly possible in a day, you’ll need an attack plan.

Start your day off by walking along the Grand Venetian Walls of the city. These walls were the Venetian fortification walls of the city during the 16th and 17th centuries when it was known as the “Kingdom of Candia.” Venetian conquerors left brilliant architectural monuments throughout the island and amazingly, even through the 20 years of siege with the Ottomans in the 17th century, some have survived to this day.

The most important architectural feature of the walls is the gates that served as a connection between the city and countryside. If they are open to the public, take the opportunity to walk through as there are often many interesting exhibitions happening.

Another point of interest is the tomb of Nikos Kazantzakis, the celebrated writer and philosopher best known for his novel Zorba the Greek. This tomb is located along the walls and is well worth checking out.

If you really want to get an early start to your day, head to the walls before sunrise and watch the sun come up over the sea — the view is breathtaking and the colours of the sky are absolutely ethereal.

The Venetian City Walls can be accessed via 25th August Street. The sunrise over the water is absolutely stunning

If you’re a history buff then Heraklion is the perfect place for you! One of the most important archaeological museums in Europe is right here in the city. The museum is home to the remains of the great Minoan civilisation. Give yourself a couple hours to admire the unique collection of over 10,000 artefacts.

If you love history then Heraklion will reward you. One of the most important archaeological museums in Europe, hosting the remains of the great Minoan civilisation, is here. Allow yourself a couple of hours to admire a unique collection of 10,000 artefacts.

If museums really aren’t your thing, don’t fret — treat yourself to a Greek coffee! Head out to Lion’s Square, in the heart of the city, and pick any café that suits your fancy. This square owes its name to the ornate Venetian fountain with lions that dominates the square. Live the Greek island life — relax and sip on a coffee as you people-watch in this city hot spot.

With your caffeine fix taken care of, walk along the vehicle-free 25th August Street. This street connects the Heraklion Port to the central town square. Along this street you’ll find some of the city’s finest buildings: St. Mark’s Basilica (now the Municipal Art Gallery; the 16th century Loggia, which functioned as a club for nobility to gather and relax; St. Titus’ Cathedral, which houses the skull of St. Titus, since it’s transfer from Venice in 1956, along with a mix of other ancient and modern buildings.

To get to the Archaeological Museum from the Tomb of Nikos Kazantzakis, head northeast along Leof. Plastira, continue onto Pediados and then straight onto Pl. Eleftherias. At the roundabout, take the first exit onto Leof. Mpofor, and turn left onto Stefanou Xanthoudidou. It’ll be an approximately 12-minute walk. Pop down to the pier and grab some of the freshest fish you’ve ever tasted!

As you walk down 25th August Street you will arrive at the Venetian Old Port and the Venetian Fortress known as Rocca al Mare, known today by its Turkish name, Koules. Koules dominates the entrance of the Venetian harbour and has come to be known as the city’s landmark. Although the fortress has been used for different reasons throughout the years, nowadays it is used for cultural events. The pier is home to an abundance of brightly coloured fishing boats and business kiosks and stands selling fresh fish. Find yourself a table along the waterfront and enjoy some fresh fish and local delicacies.

No trip to Crete is complete without visiting the Palace of Knossos. Only five kilometres away from the city, this archaeological site is a testament to Europe’s first recorded civilisation — the Minoans. It is here that human beings built the first sewerage system, and the presence of writing and recordkeeping shows the sophistication of this great culture. Hire a guide or walk around on your own to admire the complexity of the structures. Researchers believe that the myth of the maze and Minotaur was sourced from the enormity of the palace structure. This site is nestled among trees and hills, providing great scenery for photographs and the opportunity to walk around and explore.

As the capital of Crete, Heraklion’s claim of having the widest range of entertaining activities and venues cannot be challenged. There are countless restaurants, bars, and clubs that are located in the city proper, but also a little further into the towns of Malia, Hersonissos, Ammoudara, Agia Pelagia, Rethymnon, and Stalida.

If you’re only here for 24 hours, and fun = lots of loud people and loud music, head to Hersonissos for an unforgettable evening. Hersonissos in one of the biggest tourist resorts on Crete, and attracts many travellers — especially younger crowds.

The town is about 25 kilometres east of Heraklion, located on the north shore of Crete. Hersonissos is a modern town with plenty to do and entertainment that goes on until the wee hours of the morning.

If hordes of people and loud music just aren’t your thing, a great alternative would be the small coastal town of Agia Pelagia. This town is located just 20 kilometres from Heraklion towards Rethymnon, and has many restaurants and small-scale bars. If you’re looking to skip the loud parties, take a nighttime stroll along the waterfront

Whether you’re a party animal or a more laid-back romantic traveller, both destinations offer great food and drinks, interesting people, and scenic views. Dine in style in Rethymnon

Whether you’re here for a couple hours in the morning, afternoon, evening or night, if your time is limited you should definitely visit the Venetian port in Heraklion and walk along 25th August Street. This street starts at the port and leads you to the city centre. You’ll need a solid two hours to pace yourself and spend a decent amount of time at each attraction, but most of the major landmarks are along this route so it’s a good way to take in all the city sites at once.

In order to spend a good two hours in the city centre, it is recommended that your minimum layover be at least four hours long. The best way to get from the airport to the city centre is by public bus.