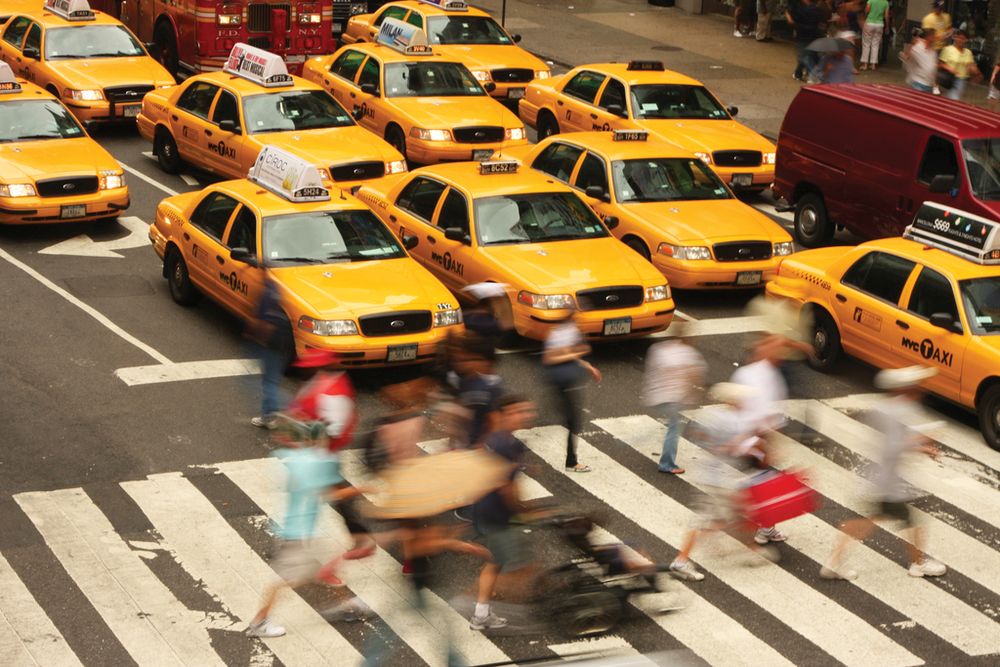 Trying to pack in the must-see sights of New York City in just 24 hours is a seriously difficult task — there’s just so much to do. However, if you plan your time strategically, it is possible to get a good flavour of the city in just one day. It also helps if you have some local advice, and that’s where our NYC tour guides come in handy! Here are their recommendations for what to do with just 24 hours in NYC.

Find a subway station and get a Metrocard. Up to four people can share it, and you get a bonus if you put over $10 on it. Each ride is $2.75.

Grab the most New York of breakfasts: a bagel and cream cheese. Any corner bodega will sell them, but the best is to find a place that makes them fresh throughout the day. The key is that they must be rolled by hand, boiled and then baked. And a fresh bagel should never be toasted — ask them what just came out of the oven. Add your schmear of choice and you probably won’t need to eat again until much later in the day. In the Midtown area, we recommend Best Bagel and Coffee, Ess-a-Bagel or Zucker’s.

The most iconic of NYC breakfasts: the mighty bagel | Photo by New York City Urban Adventures

Head over to the Rockefeller Center, because it’s time to get up on the Top of the Rock observation deck. At the Top of the Rock, 70 storeys up, you get the best view of Central Park and the Empire State Building. Take a look around and survey the five boroughs of New York City and nearby New Jersey. You will experience this view from many perspectives, and on a clear day you can see for over 30 miles (about 50 kilometres). If you love NBC, consider a tour of the studios, and if Art Deco is your thing, take a tour of Radio City Music Hall and walk among the lobbies — these are both close by.

Next, walk up 5th Avenue and window shop, just like Audrey Hepburn in Breakfast at Tiffany’s. Be sure to check out St Patrick’s Cathedral and St Thomas Episcopal Church, just around the corner from the Museum of Modern Art, where you can see Dali’s melting clocks, Picasso’s grotesque Demoiselles d’Avignon, and Van Gogh’s Starry Night.

Around 57th Street is where things get really glamorous. Marvel at the displays at Harry Winston, Tiffany & Co., and Bergdorf Goodman, which used to be the Vanderbilt sisters’ mansion. Check out the secret food hall underneath the Plaza Hotel for a mid-morning pastry, like cake from Lady M, cupcakes from Billy’s Bakery or freshly fried doughnuts from Doughnuttery.

The trees of nearby Central Park are beckoning! There are several unique ways to get there, either with a pedicab, which costs at least $3 a minute, or take a stroll and visit the carousel, Sheep’s Meadow and Bethesda Fountain. Head over to the Boat House, which you might recognise from Where Harry Met Sally. You can also rent a rowboat for $15 an hour (cash only!). Or rent a bike from a nearby CitiBike location with a $12 day pass that enables you unlimited 30-minute rides. 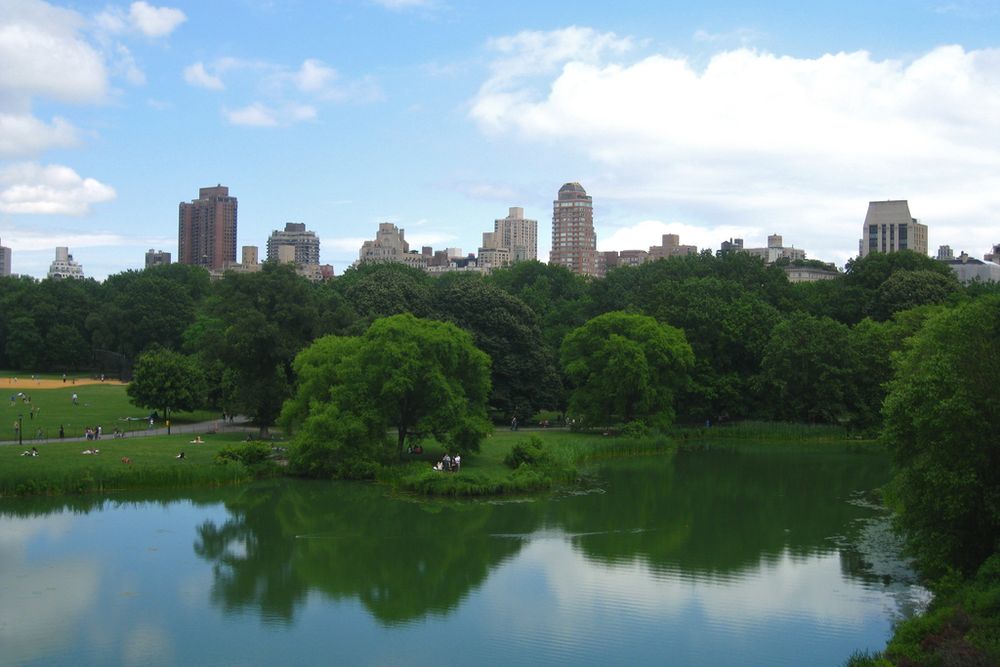 If you stick to the east side of Central Park, you will pass the Conservatory Waters, where you can rent a giant toy boat, then pass by the Alice in Wonderland statue on your way to Museum Mile’s art museums. If you go up the west side of Central Park, head to the Bow Bridge (from Spiderman), and Strawberry Fields, then to Belvedere Castle, near the American Museum of Natural History and the New York Historical Society, which is a great American history museum in its own right.

Grab an iconic yellow taxi, duck down into the subway, or hop on the bus and make your way to Greenwich Village.

Visit the Washington Square Arch, the heart and soul of Greenwich Village, near 5th Avenue and 8th Street, then stroll down MacDougal Street, savour NYC’s first cappuccino at Caffe Reggio, and enjoy a falafel at Mamoun’s. Wander through the Italian South Village along Bleecker, and Greenwich Village’s side streets on the way to 7th Avenue’s Christopher Street / Sheridan Square subway stop. Some of the world’s most legendary bars, clubs and cabarets are in Greenwich Village, and they are still great decades after opening.

Next, hop on the #1 train all the way down to South Ferry, where you’ll understand the meaning of ‘city of hurried and sparkling waters’! The Staten Island Ferry offers a free one-hour roundtrip view of the harbour, the skyline, the Statue of Liberty and Ellis Island.

Back on dry land, pay a visit to the heart of the colonial era’s downtown, including the roaring Bull and Wall Street. A favourite route of ours includes Trinity Church and Stone Street and Mill Lane, which date back to the 17th-century Dutch Nieuw Amsterdam days.

Pay a visit to the new World Trade Center. Instead of visiting the museum, which can require advance tickets, spend some time at the reflecting pools that are in the place where the towers once stood and have all the victims’ names engraved around the edges.

When it’s time for dinner, eat inside the Oculus at the newest location of Eataly, a giant Italian food hall that features different restaurants concentrating on pizza, pasta and other Italian specialities. Or you can eat at Hudson Eats in Brookfield Place (you can walk to the building from the underground walkway attached to the Oculus). Here you’ll find lots of options from local food vendors like Mighty Quinn’s BBQ, Num Pang Cambodian Sandwiches and Umami Burger.

Or, head to Front Street in the historic and surprising Seaport District. Walk around the historic cobblestone streets and then walk a few blocks west to Kesté on Fulton Street, which is known to have the best wood-fired Neapolitan pizza in the city. After dinner, walk the iconic and ineffable Brooklyn Bridge, taking in the unforgettable views of icons like the Statue of Liberty and the Empire State Building.

Love it or hate it, Times Square is one of those places you just have to see for yourself | Photo by New York City Urban Adventures

Once in Brooklyn, enjoy ice cream on the Fulton Ferry Landing along with the view. Then head to the district of Dumbo, a post-industrial, post-art loft neighbourhood, and a unique prelude to Brooklyn. You can get to Dumbo by going under the bridges and following the signs. Take in the views of Manhattan from the ever-expanding Brooklyn Bridge Park.

Once you’ve taken in everything Brooklyn has to offer, head back into central Manhattan and up to Times Square. Take the F Train to the A, C or E train to 42nd Street Station, and see the Great White Way at the Crossroads of the World as you are walking up to 49th Street. Part of the spectacle of Times Square is simply being there and taking in the lights.

Speaking of taking in the lights — now is the time to take the lights in from above at the Empire State Building observatories. Take the Q, N or R subway to 34th Street Herald Square and walk one block to 5th Avenue. Don’t worry if it’s late — you can get into the Empire State Building until 1am. Take in the city lights, and plan your next adventure in New York City!