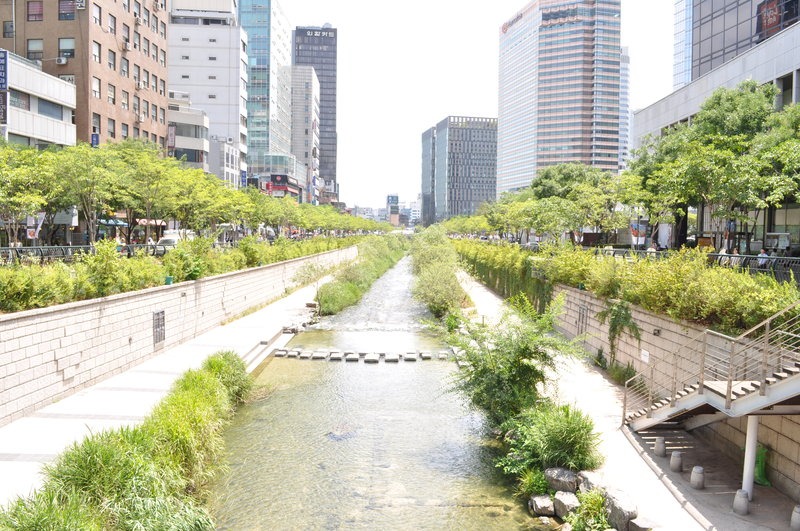 Seoul is a vibrant city with way too many things to do in a mere 24 hours. But if one day is all you’ve got, make the most of it! Follow our tips below for a jam-packed 24 hours in Seoul.

Start your day in Seoul with a bit of nature alongside breakfast, and take a walk along the Cheonggyecheon Stream. Located in a park in the middle of the business district, this peaceful stream is the perfect place to watch the many busy Koreans hurrying off to work. There are also many cafes nearby, so grab a cup of coffee or western-style breakfast as you people-watch.

From Cheonggyecheon Stream (and Cheonggyecheon Square), head over to Gwanghwamun Gate, the largest gate at Gyeongbokgung Palace. (Just keep in mind that the palace is closed on Tuesdays.) The palace was built in the 1300s, although has suffered a few destructions and subsequent reconstructions over the years. It’s one of the most famous palaces in Korea and you can easily spend an hour or so walking within the palace grounds. Time your visit for between 10am and 11am and you can catch the ceremony for the changing of the royal guard.

Museum lovers should head to the National Museum of Korean Contemporary History. Walk through Korea’s 20th-century history, from its liberation from Japanese rule through to today, including an exploration of current relations between North and South Korea. The museum opens at 10am and is free to visit. 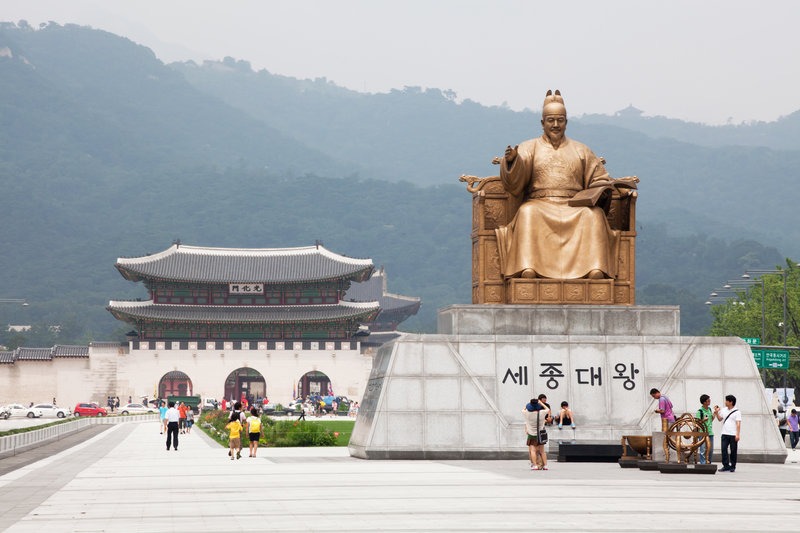 Hungry yet? Head to Tongin Market for lunch. It’s a 10-minute walk from the palace, so stroll over on foot and work up an appetite for a buffet of both traditional Korean dishes and street food items. You’ll be given old Korean coins at the customer service counter to use in the market to pay for food. Load up on fried fish and spicy veggie dishes on a budget.

After you’ve eaten, head east along the street behind Gyeongbokgung Palace (north side), and you’ll walk past the Blue House, the presidential house where the current South Korean president lives.

Traditional Korean houses can be hard to find throughout the city, but locals know to head to Bukchon Hanok village for a dose of Korean culture (in fact, you’ll see plenty of locals as well as tourists looking around). Don’t be surprised if you see visitors wearing traditional Korean clothing, known as hanbok, as it’s common for people to rent outfits and wear them around the traditional village for fun — in fact, you can avoid paying palace entry fees if you are wearing hanbok, but note that renting an outfit is more costly than just paying the entry fee.

From the village, head over to Changdeokgung Palace and/or the Jongmyo Royal Shrine, both of which are UNESCO Cultural Heritage sites. Changdeokgung Palace has a beautiful secret garden (access requires that you buy an additional ticket). To enter the palace, you must go with a guide, and visits are only permitted at certain times due to preservation efforts. Note that the palace is closed on Mondays.

Jongmyo Shrine was a place of worship for kings during the Joseon Dynasty, and to this day still preserves ceremonies of song and dance that date back to the 14th century. As the shrine is for honouring the spirits of the deceased, it is not as colourfully decorated as the palaces — and makes for an interesting comparison after visiting Changdeokgung. English guided tours are available at 4pm and last about 50 minutes. Note that the shrine is closed on Tuesdays.

#localsknow tip: As the names of the palaces can be hard for non-Korean speakers to remember, just keep in mind that Gyeongbokgung Palace is the West Palace and Changdeokgung Palace is the East Palace. These are the two biggest palaces in Seoul (there are three others but they are rather small).

Work up an appetite with a walk over to Insadong Street (it’ll take you about 15 to 20 minutes on foot, heading west of Jongmyo Shrine). The area of Insadong is home to numerous shops selling traditional clothes, paintings and pottery; there are also plenty of souvenir shops, traditional tearooms, restaurants and street food stalls to choose from for dinner. One of our favourite shopping spots is Ssamzigil, a small mall in Insadong where vendors sell handcrafted items. These might be a bit pricier than what you’ll find in the souvenirs shops but they’re far better quality, and you you can get tax refund.

Close out your day in Seoul with a bit of Zen. Jogyesa Temple is the headquarters of Zen Buddhism in Korea and the temple is lit up with lanterns in the evening, making for a beautiful view after sunset. It is open 24 hours and is right next to Insadong.