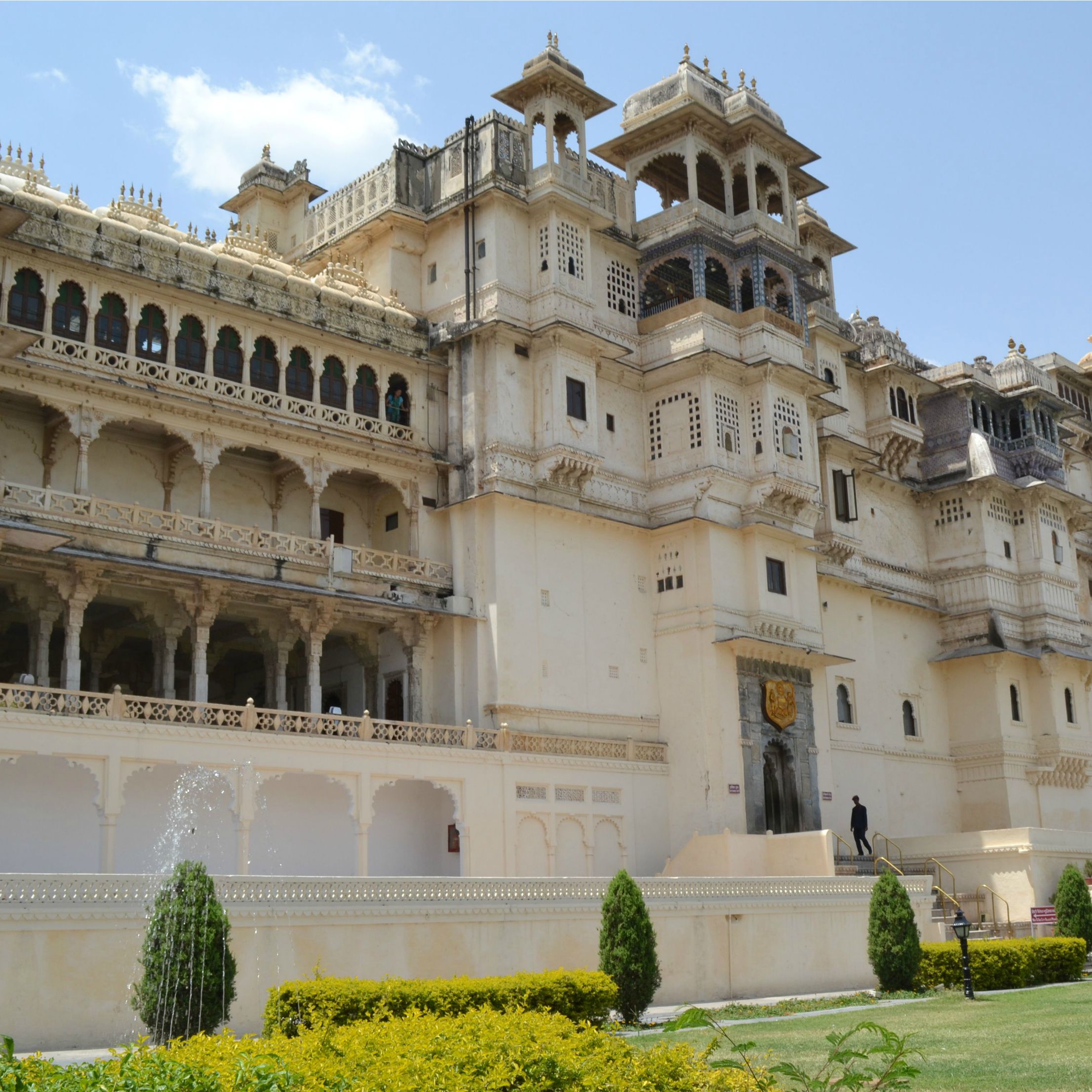 Udaipur’s plentiful bodies of water have given it the nicknames of Venice of the East and City of Lakes. This includes Lake Pichola, one of the most beautiful lakes in the city and Jaisamand Lake, the second largest man-made lake in all of Asia. An abundance of lakes aside, Udaipur is also home to a plethora of majestic palaces, the largest and most famous of which is City Palace. The city’s undeniable beauty has also earned it the title of most romantic city in India. In addition to imposing palaces and sparkling lakes, Udaipur offers the chance to shop numerous bazaars, browse art galleries and museums, enjoy drinks atop rooftop terraces, and explore the city’s many winding, colourful streets. Fun fact: Udaipur was also used as the setting for the James Bond movie Octopussy.

Greet your day in Udaipur with a visit to Sajjan Niwas Garden where you can quite literally, stop and smell the roses. Also called the Gulab Bagh (gulab means roses) or Rose Garden, this is the largest garden in Rajasthan. The beautiful gardens house more than a hundred varieties of roses and is centrally located right beneath the banks of Lake Pichola. The soothing panorama features unusual rose beds, massive trees, orchids, and spacious lawns and it’s a peaceful way to start your day and get centered for some serious sightseeing. The garden also houses a small zoo where you’ll find a number of animals like chinkara (Indian gazelle), leopards, tigers, and birds.

Next, make your way on foot or auto-rickshaw to Lake Pichola, a man-made lake built all the way back in 1362. You might be questioning just what makes this particular lake worthy of your late morning, but this is a lake that people come from all over the world to visit. It’s the oldest and one of the largest lakes in the city and is surrounded by temples, bathing ghats, green hills, and gleaming palaces. There are also four islands on the lake, one of which houses the breathtaking Lake Palace, built in 1746, which has recently been turned into a heritage hotel. The best way to experience the lake is to take a mid-morning boat ride to see the islands and take in the surrounding palaces and Aravalli Hills.

If all of your sightseeing so far has helped you work up an appetite, take a taxi to have lunch at 1559 AD Restaurant, named for the year the city of Udaipur was founded. The restaurant offers lovely Indian, Thai, and continental dishes and overlooks the banks of Fateh Sagar Lake. There are garden tables as well as several different rooms with just a few candlelit tables in each. The ambiance is magical, with Indian classical music playing in the background. Cap off your meal with what many believe to be the best coffee in Udaipur.

After lunch, hop in an auto-rickshaw and head to the Maharana Pratap Memorial, situated at the top of Moti Margi, or Pearl Hill. The historic site is dedicated to the Rajasthani warrior Maharana Pratap. The memorial houses a life-sized bronze statue of Maharana Pratap riding his loyal horse, Chetak. The top of Pearl Hill is also an ideal spot to grab some Instagram-worthy pics of the city and Fateh Sagar Lake below. Plus, the hill is home to a pretty Japanese rock garden, making it a relaxing place to spend an afternoon.

Head back to the Lake Pichola in an auto-rickshaw to catch the sunset and then get your culture fix with an evening visit to Bagore ki Haveli for Dharohar, a traditional Rajasthani folk dance show. The 18th-century waterfront haveli (term for traditional townhouses and mansions in India) makes for a fascinating setting for the show, which lasts about an hour. The show starts at 7pm, but it’s first come, first served, so it’s best to get there by 6:30pm if you can. Following the show, choose from one of the many restaurants near Lake Pichola, most of which have outdoor seating with beautiful views of the lake.

For travellers on a short visit, we’d recommend having a layover that will allow you to spend two hours in the city centre, and another hour for travelling to and from the airport. Give yourself about four hours to see the sites and have enough time to get back to the airport.

If you want to see Udaipur in two hours in the morning or afternoon, spend some time exploring City Palace. The huge complex on the banks of Lake Pichola is known as the largest palace complex in Rajasthan. Making your way through the architecturally stunning complex is an awe-inspiring way to spend a short stop in Udaipur.

If you’re in Udaipur for an evening or nighttime layover, take in some evening views over lovely Lake Pichola with a visit to Upre, the rooftop restaurant at the Lake Pichola Hotel. The name means “upstairs” in the local dialect and is run by the same family that runs the aforementioned 1559 AD. Grab a table, order something to eat, and enjoy views of the lake and City Palace below.