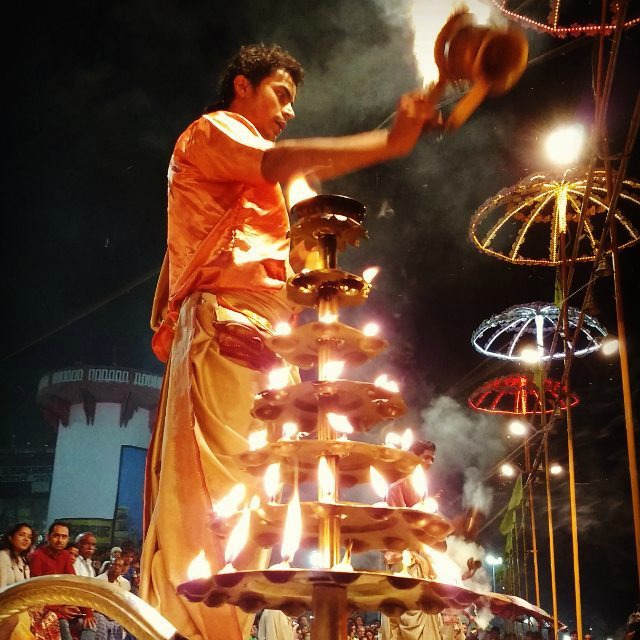 The holy city of Varanasi is one of the oldest continuously inhabited cities in the world and likely the oldest city in India. Situated on the mighty Ganges River, the city is chaotic, beautiful, and enthralling all at once. There’s so much to see and do in Varanasi, but you can still get a taste for what the city has to offer with a short trip. If you only have 24 hours to spend in the fascinating city, here are the best things to see and do on a whirlwind visit.

A boat trip on the Ganges is a mesmerisng way to start your visit to Varanasi, especially early in the morning. Bonus if you can catch the sunrise, but if not, the ride is a great way to see all the major Ghats along the river. Ghats are the riverfront steps that lead down to the Ganges and they all have different uses, from bathing to cremation sites. A ride usually lasts an hour and costs about 300 INR per person, but you’ll likely need to haggle a bit (or more than a bit in some cases). Most rides go from Dashashwamedh Ghat to Harishchandra Ghat and back again.

After your morning boat ride on the Ganges, it’s about a 10-minute walk to Brown Bread Bakery, a popular spot for hearty breakfasts with a rooftop garden. They use mostly organic ingredients and some of the proceeds from your breakfast will go to local charity, Learn for Life, that aims to provide free education and medical assistance for the less fortunate. If you’re not super hungry, you can make a stop at nearby Babba Lassi and Mix Fruit Juice for a lassi to fuel you up for some mid-morning temple-hopping.

Varanasi is home to numerous beautiful temples and many are within walking distance of one another, or at least a quick taxi ride in between, depending on which ones you want to see. From Brown Bread Bakery, it’s a quick walk to Nepali temple, a small temple known for its intricate wood carvings, where you can start your exploring. Next, walk over to Shri Kashi Vishwanath Temple, one of the most famous temples in Varanasi, dedicated to Lord Shiva. Finish your temple loop with Mahamrityunjay Temple, another of the city’s more famous temples. You can either walk (15-20 minutes) or take a taxi, depending on how energetic you’re feeling.

From the last temple it’s a 10-minute taxi ride to Shree Cafe Vegetarian Restaurant, known for their generously portioned thalis, friendly service, and quiet atmosphere. This spot is tucked away amid the lanes near Vishwanath Gali, a bustling market in the centre of the city, but it manages to be cosy and quiet despite the busy market surrounding it. Once you’ve had your meal, spend some time browsing the many stalls and vendors of Vishwanath Gali that sell everything from silk saris and bangles to wooden toys and souvenirs.

After lunch make your way via taxi to Sarnath, about a 30-minute ride outside of the city. This is an important spiritual site and one of four geographically important places in the life of Buddha — in this case, where he gave his first sermon after achieving enlightenment. Dhamek Stupa is believed to be the exact spot of the sermon, which you can see in Sarnath among other temples, shrines, and monuments. Everything here is situated fairly close together so you should be able to explore on foot. You’ll also find the Sarnath Archaeological Museum here, which houses ancient Buddhist artifacts, including sculptures, art, jewellery, and carvings.

Hop a taxi back to the city and start your evening by watching the highly-choreographed Ganga Aarti ceremony on the Ghats by the Ganges. This is a beautiful spiritual ceremony performed nightly in three cities on the Ganges. The ancient Hindu ritual is performed by priests and involves a mesmerising blend of chanting, glowing lamps, and incense — all part of an offering to the Goddess Ganges. The ceremony starts at 7pm in the winter and 6pm in the winter. It’s best to get there at least 30 minutes early to get a decent spot to watch everything unfold. Following the Ganga Aarti, make your way to the nearby Dolphin Rooftop Restaurant, located at the Rashmi Guest House. They have both vegetarian and non-vegetarian food and the rooftop location offers beautiful views of the Ganges.

The best way to get from the airport to the sites is by taking a taxi. Budget four hours total to get in and out of the city and have enough time to see everything you want to see before your flight.

If you want to see Varanasi in two hours in the morning or afternoon, the best thing to do is take a leisurely stroll by the Ganges. The backbone of the city is the massive River Ganges and there is no better way to get a feel for Varanasi in a short time than to visit the river and its age-old Ghats.

If you’re in Varanasi for an evening or nighttime layover, the best thing to do is to participate in the Ganga Aarti ceremony at the Dasawamedha Ghat. Evening Ganga Aarti is a beautiful and highly choreographed spiritual ceremony. It starts every evening at 6pm or 7pm (depending on the season) and makes for a unique experience in the holy city.