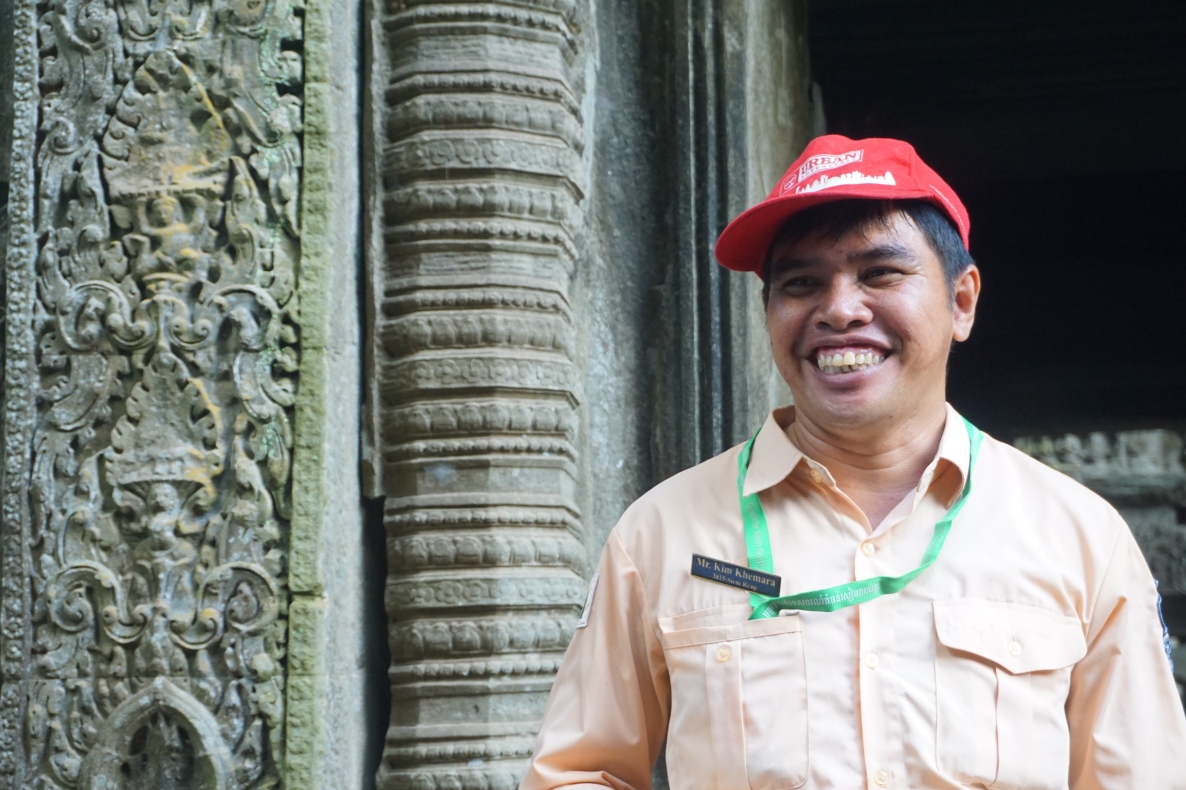 A million-watt smile lights the way as we drive along the dusty roads from Siem Reap to the UNESCO World Heritage Site of Angkor Wat. The warm smile belongs to our Urban Adventures Khmer guide, Kim Khemara, whose personality is equally as vibrant. He tells us that his name, Khemera, means happy. Apparently, he was born laughing. In Cambodia, parents give their children names that honour their first few moments on earth. His parents foreshadowed his life excellently as he fully embodies the emotion.

Khemera’s energy is contagious and excitement fills the van. We’re about to witness a landmark we’ve fantasized about seeing our whole lives. As we walk through the crumbling entrance gate towards the sprawling Angkor Wat structure, one of the New 7 Wonders of the World, Khemera shares with us that we’re entering one of the largest and oldest religious monuments. The iconic temple was originally erected for Buddhist monks, which Khemera himself was for nearly a decade.

During the 9 years that Khemera served as a Buddhist monk, he travelled from his rural village to Phnom Penh, Seam Reap, and around Thailand. This sparked his passion for travel. He learned Thai, Vietnamese, and English–all in addition to his native language, Khmer. This is an extraordinary feat as during the Khmer Rouge regime he was only allowed to study and speak Vietnamese.

After leaving monkhood, Khemera joined the Sala Bai social enterprise. He worked for the grassroots hospitality training school for 15 years. His first role was to transport at-risk children from the countryside to the school in his tuk-tuk, and later he became a social worker. He supported children who had limited prospects, just as monkhood helped him reach his full potential.

This year, he decided that he was ready for a new challenge and officially became a licensed tour guide. He tells me that he’s “very proud that I have the chance to be a tour guide. I never would’ve thought that I’d have this job. I was born on a rice farm in a small village. There was no access to education. I never would’ve thought that I’d have the chance to learn English. I’m proud that I got the tourist license from the Ministry of Tourism.”

Although he’s been here dozens of times, Khemera is visibly humbled and overjoyed to once again be returning to Angkor Wat. “Angkor Wat is the heart of Cambodia, and it’s my heart. The people of the world know Cambodia because of Angkor Wat.” To visit the historic site with someone who has such an intimate knowledge of the temple’s rich history is extraordinary. This sort of authentic experience is impossible to recreate.

Khemera first saw Angkor Wat through a photograph captured by a Cambodian soldier from his village. Khemera was a young boy and remembers looking at the grainy picture and thinking, “Oh, that is heaven!” Little did he know that Angkor Wat was built to represent heaven on Earth. As I strolled through Angkor Wat on that rainy afternoon, I felt a similar sense of this place being entirely other-worldly.

Some years later when he was 19, Khemera finally had the chance to visit Angkor Wat–as a novice Buddhist monk. In 1994, the journey from his monastery in Phnom Penh to Siem Reap took over two days. He arrived at Angkor Wat at dusk just as the sun began to set, and again, he was overwhelmed with the sensation that he was looking at heaven.

“I’m a lucky boy because I got in Angkor Wat,” says Khemera. He was one of the few villagers who’d been able to see the sacred space, as not many people in Cambodia could afford to travel to Siem Reap. He continues to reflect on that first visit and remembers being overjoyed as he ran up the central towers of Angkor Wat.

I could’ve guessed that Khemera’s favourite place within the archeological site is the Bayon Temple in the middle of Angkor Thom. As we approached the temple, he told us that there are 54 towers with 216 faces of King Jayavarman VII. Out of all of the faces, only one is smiling. Khemera explained that this is the smile of Cambodia as King Jayavarman VII smiled first, and then the Khmer people smiled. When I finally find the smiling face it looks just like Khemera’s smile, yet it was built a thousand years ago.

Explore Angkor Wat with an Urban Adventures local guide by your side on our Angkor Wat Adventure. Or check out our other Siem Reap tours here.